I keep telling people that Suanne and I do not go back to the crime scene. I know that expression does not make much sense. But it sounded good. LOL! What I meant to say is that we hardly ever go back to the same restaurant once we had written about them.

It is kind of sad, isn’t it? I think about 95% of our dine outs are to restaurants we had never visited before. Truth is, I wish sometimes we could be like normal people who has a favourite restaurant they go back to again and again. Do you have one such restaurant? You know, a restaurant you visit at least once or twice a month? 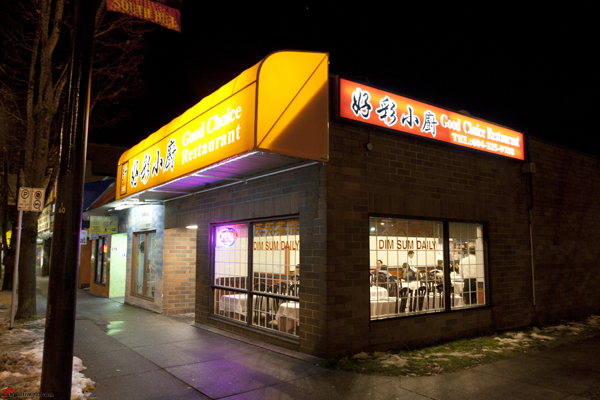 We went back to the “crime scene”. We had dim sum at the Good Choice Restaurant on the recommendation that this is a good restaurant. It was. We were very impressed with the dim sum which the chef makes on his own. It was one of the better dim sums restaurants we had and I blogged about them here.

While their dim sum was excellent, we were told that it is the dinners that is better. Yeah, I kept hearing the mention of their salt bake chicken and really wanted to try that too. For Chinese dinners, the only way to do justice to this is to gather enough people to fill a table.

I had so much on my plate these days that it is simply impossible for me to organize one. However, before I knew it, a hand shot up to volunteer to organize it. It was Michelle. Michelle did all the planning including the selection of dishes.

A total of 12 people attended that night. That is already 2 people more than what was earlier intended.

The people attended are mostly new to Suanne and I. These were Michelle’s foodie friends and so it was great to get to know new faces.

They served peanuts and pickled daikon and carrots as free appetizers. Nothing fancy.

After we got settled down, apparently the waiter who served us during our earlier dim sum visit told us that he remember us and pointed to the very table we were at. He sure has good memory. He also told us that he read the post I wrote too. Gosh … good thing I had good things to say or else you never know what they do to your food.

Yeah, I saw too many Cantonese movies where I see waiters spitting into the food before serving it to the customers they don’t like! I wonder if this sort of things really happen in real life. Who knows right? These waiters and waitresses in Chinese restaurants must have also watched movies like that and they get the idea from the movies.

Anyway, the service that night was good. Actually it was very good and I am totally impressed with it.

They were very prompt in changing our dishes and what I like best was the way they pace the whole dinner for us. It was only one or two dishes at a time. I hate it when restaurants pile on dish after dish that we lose track of the dishes and felt rushed. Instead, what I like is to be able to slowly savor each dish and talk about them. That is what they did for us that night. 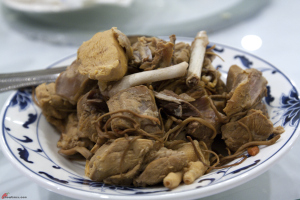 We started off with herbal soup which was both “ching” (clear) and flavorful. That is a hallmark of a well done soup … that the looks of the soup belies the flavour.

The soup is made with pork, chicken feet and “Chung Choe Far” (don’t know what it’s called in English). The plate of the meat (pictured right) does not have much taste left as all the flavour has gone into the soup. It is also tough and the only way to eat it if you want to is to dip it in soya sauce.

Granted not many people eat this. It is more for show. Anyway, does anyone of you actually enjoy these meat? 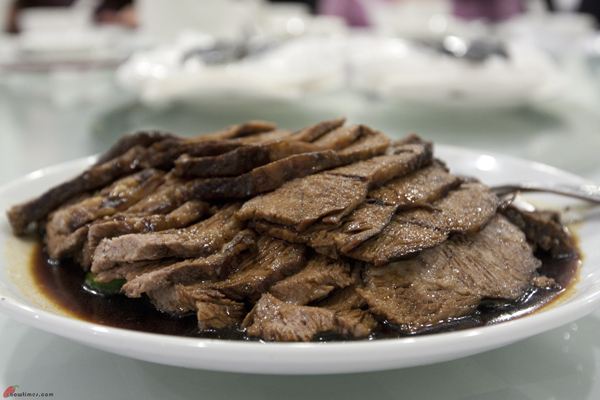 The Beef Brisket was beautifully done. It is so simply served on a bed of julienne cucumbers. The light soy sauce flavour meshes well with the beef which was tender. I normally would stay away from brisket as I just do not usually like the texture of briskets. However, I have to say this was good. I like that it is served cold too.

There was a bit of indecisiveness on whether to get this or not. This is Scallop in … XO Sauce with Chinese Celery. You see, we have 12 people and they only have 10 scallops left that night. Moreover, it is $6 per scallop and so this is not a cheap dish too.

Hehehe … I think Michelle is trying to think for everyone and not make this dinner too expensive. Instead, everyone said go for it! 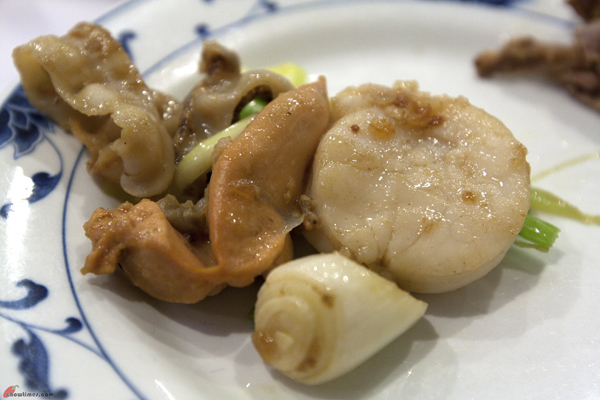 Who doesn’t like scallops! The scallop muscle was quite chewy but actually to think that the above is $6, it is not something you eat everyday.

The Salt and Pepper Deep Fried Crabs was spicy. We got 2 crabs because one would have been too little for twelve people. But with two crabs, everyone had a good share of the crab.

BTW, does anyone know how many pieces would Chinese restaurants normally cut a 2lb crab?

The Chiu Chow Duck is one of Good Choice’s signature dishes. They marinate the duck for a whole day and then bake it. The master sauce is sweetish with anise flavour.

As you can see the duck was excellent. For me what I like too is the “jup”. The precious “jup” cannot be wasted and so that is the point that I had to ask for steamed rice.

The Salt Baked Chicken is another of their signature dishes. They told us that they marinate it in special sauce and then bake it.

I ask them what that special sauce is, they told me it is a secret sauce. They did not want to tell me.

After they showed us the entire chicken, they took it back to the kitchen to cut it up for us. This is one dish that people are raving about and so we all had high expectations for this dish.

Hmmm … maybe something was amiss that night. The sauce was pretty salty … it is only good with steamed rice. Perhaps it is also my personal preference. I felt that it is the free range chicken they used and therefore not as tender as I wish it to be. So by and large it was a so-so dish.

The Live Steamed Black Cod was very tender, sweet and fresh tasting. The fish was earlier brought out for us the inspect — it was all lively and jumpy. Someone was commenting that all the showing of live seafood sometimes does not mean that it is exactly the one they serve. It is not that one will tag the seafood or anything like that. So yeah, it is all just for show and it all depends on the honesty of the restaurant. No, I am not saying this restaurant is not honest. Am just saying what was discussed at the table. 🙂

There wasn’t a lot to go around the table but at least I think everyone had a taste of it.

The Braised Pork Hock is a beauty to behold. The restaurant told us that they braised this for 2 to 3 hours but added that it is the preparation that takes more time. Huh? Really? I would have thought the braising is the main thing but what sort of preparation is needed to cook this? Anyone knows?

The meat was sweet and tender. Done well. 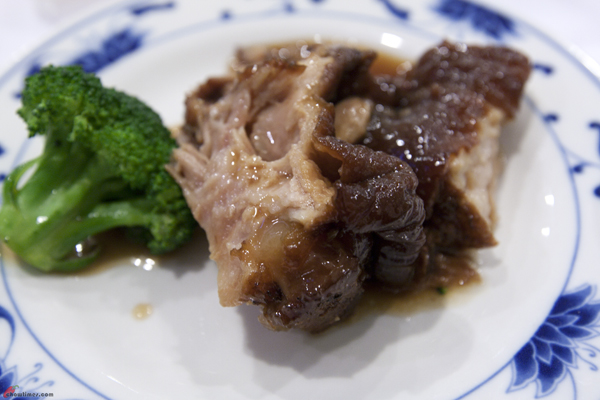 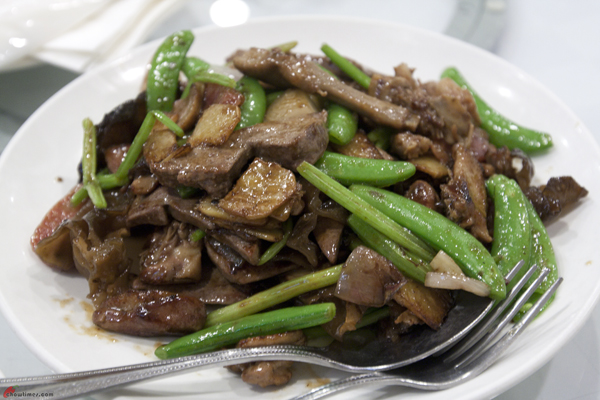 This is supposed to be another of their signature dish … the Stir Fry Squab with Liver. It is served with more stuff like chinese sausage, wood ear fungus, sweet peas and Chinese celery.

We could barely see the squab. I used to enjoy liver dishes, but for some reason I now don’t enjoy it that much. I don’t know why.

People hardly touched this dish too. There are always leftovers every time I have liver dishes. Note to self … don’t ever order liver dishes next time.

The Sweet and Sour Spareribs was a recommendation because the sauce is supposed to be different (I am not sure what it is though).

This is well made with the outside crispy and the sauce not too vinegarish. Pretty good.

We also order the Ginger Milk Custard as a dessert. It was not so gingery but actually I should say it was quite bland.

We should not have ordered this because the restaurant serves free dessert too.

The free desserts were Coconut and Mango Jelly and Red Bean Soup.

The dinner came up to $37 per person include tax and tips.

Generally, the dishes were good. However, it was not extraordinary. Maybe it was because we came with too high an expectation.

Thanks, Michelle, for organizing this and inviting Suanne and I.