We would normally have not contemplated on travelling so far for food knowing that there are so many great places around. But we did. We went from Richmond to the Guildford area in Surrey in search of the Malaysian Hut Restaurant last week.

It is not that we had never been to Malaysian Hut before. We were there almost 5 years ago and did blog about them in one of the earliest blog posts (see link here). The reason why we made that trek to Surrey was because of the comments made on the Penang Delight post. That post drew an amazing 108 comments! Many of the comments urged us to go check out the Malaysian Hut Restaurant again.

And so we did.

The Malaysian Hut Restaurant is located on 108th Avenue and 148th St in Surrey. With an address like that it should be easy to find. However, spotting this from the street is not as easy. We drove past this place because we were looking out for a place that looked like a restaurant. Instead, it is located in a block of industrial building. 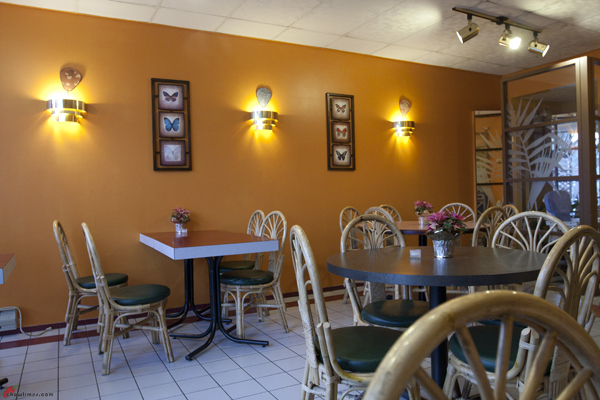 The Malaysian Hut Restaurant sure looked much better today compared to what we remembered the last time we were here. It looked like they had just recently painted the inside a bright orange and this gives the place a nice warm glow. There are a few faux Malaysian decor of wood carvings which looked more Thai than it is Malaysian but we had gotten used to it. Many Malaysian restaurants just put up decorations from South East Asia and passing it off as Malaysian because most people would not know better anyway.

The restaurant seats about 30 people max. It has been operating here for 12 years already. It does say a lot about the longevity of the restaurant isn’t it? I read somewhere recently that restaurants lasts about 10 years on the average in Vancouver. I was surprised when I first heard it because 10 years is not a long time to put ones heart and soul into running a restaurant.

As we walked in, we could smell the aroma of belacan. That is a good sign! To us it is aromatic but I do understand why some who are not familiar with Malaysian cooking would describe it as pungent odor and not aromatic. LOL!

It was very quiet on a Saturday afternoon when we were there. We were the only customers until much later when another group came in. 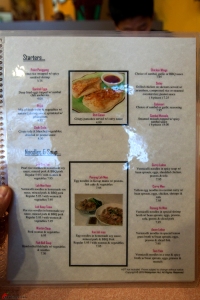 You may click on menu page above to show a larger image.

Malaysian Hut Restaurant menu is not very big. The items are mostly general Malaysian dishes that you find other restaurants with a few rarer items such as Gado-Gado, Pulut Panggang, and Penang Ha Mee.

Check out the Specialty Orders section on the third page above. There are four items that require one day advance order and that includes Bah Kut Teh, Sambal Belacan Kangkung, Popiah and Sambal Brinjal. I can understand that Popiah part (because of the number of ingredients that need to be made fresh) but the other dishes are quite common on other restaurant’s common menu.

The prices are reasonable. Most of them are below $10 a dish.

The Roti Canai is $4. It was delightfully authentic, flaky and crispy as what a good roti canai is meant to be. However, it was also disappointingly … small. Nanzaro and Arkensen loved this a lot and virtually finished the whole thing in no time, leaving just a small piece for Suanne and I. I know that each of them could eat TWO servings of this on their own!

It was good. It was so flaky and crisp that we can hear the crackle when tearing it. The curry sauce is really good too and they serve the ones we like, fish curry. There are no fish in  it. As a matter of fact, the curry served with roti does not come with meat at all.

Our waitress (who turned out to be the daughter of the owner) said that her mum personally makes this herself. In case you think it is made fresh, it is not. They are made in a batch and the frozen. It was still amazingly good. 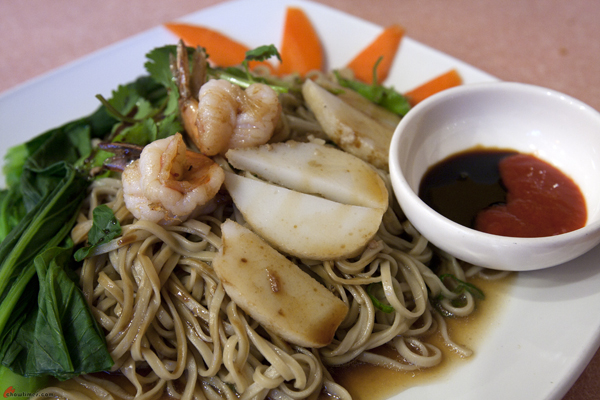 This WAS supposed to be the dish we came here for. Readers were commenting on the Penang Delight post that they have Loh Mee and I wanted to try it because I had not had this for many many years already. I looked high and low for this dish and the closest was the item that is called PENANG Loh Mee.

Oh … what I wanted was the KL Loh Mee which is totally different from this animal. The one I was looking for uses thick noodles and served in a vinegarish thick broth. It is supposed to look like this.

Disappointing. The Penang Loh Mee was $8. It is described as egg noodles in kecap manis with prawns, fish cakes & vegetables. It is nothing more than mixed noodles and frankly I had never come across this type of noodles called Penang Loh Mee. The sauce is sweet and while the noodles is delicious, for the life of me I don’t know if this is a dish you will find in Malaysia.

So, any Penang-lang out there please let me know more about the Penang Loh Mee. 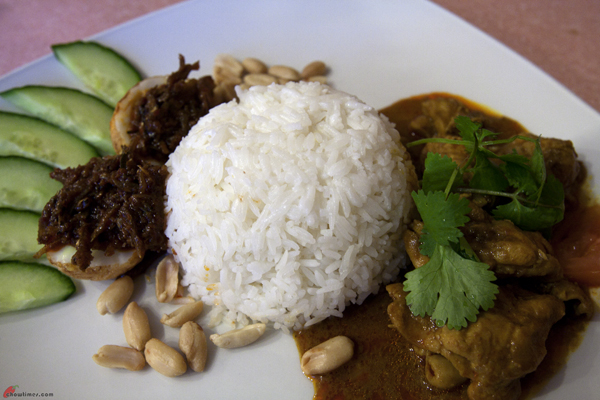 We ordered also the Nasi Lemak ($8). Believe it or not, this is a very common Malay breakfast although people will also eat it for dinner. I had this almost everyday for breakfast when I was still working in Malaysia. I like the way it is served in Malaysia. They will give you a plate of coconut flavoured rice and then leave it up to you to scoop as much other ingredients as you like. And the man will then estimate how much it will costs. Often it costs different but we did not care if it is good. After all it is really cheap.

The rice in Malaysian Hut was the real deal. They served coconut rice. The meat is curry chicken with eggs, cucumbers, chili anchovies and salted peanuts.

Don’t get me wrong when I pick on the minor details of this dish. I just wanted to point out what makes an authentic nasi lemak. Firstly, the peanuts. It seems like they took the easy way out and bought it from the the local stores. These are western peanut and not kacang puteh. They need to fry them with the skin on until it is dark brown.

Secondly, they used English cucumber instead of Timun, the smooth shorter variety. Then there is the tomato and cilantro on it which is not typical in Nasi Lemak.

But what I like a lot is the fried egg which is topped with lots of sambal ikan bilis (anchovies sambal). The egg was first hard boiled and then deep fried again giving it a nice crisp outer layer. The sambal ikan bilis is top notch, flavourful with a hint of tamarind. 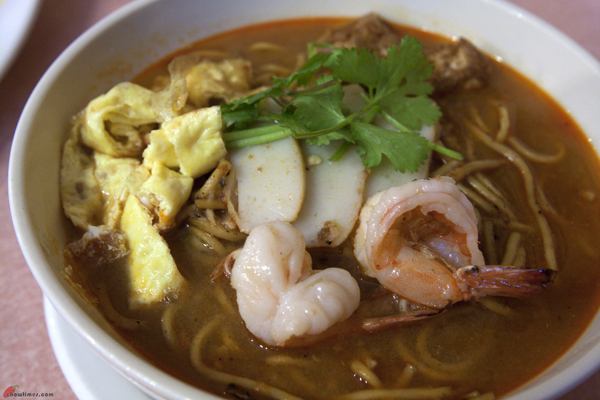 We were also looking forward to the Penang Ha Mee ($8) which is basically translated as Penang Prawn Noodles.

This one did not quite do it for us. The most important part is the broth. This broth is thicker than what you find in Penang but what is not good is that it was very salty. It was so salty that we did not even bother drinking it.

The noodles and other ingredients was pretty good though. Too bad … it is the broth that is the most important.

When we asked for one recommendation, we were recommended Sambal Fish ($11). It is a fried fish fillet topped with special sauce and served with coconut rice.

When we saw this we wouldn’t call this Sambal Fish. Let’s just say that it is a “regionalized” version of sambal fish. Technically this is sambal fish because (a) there is a fish and (b) there is sambal. But if this is served in Malaysia, they will call this something else.

The fish served is River Cod and that is one fish not found in South East Asia. Traditionally, typical Malaysian will used whole fish, bone in and not fillet like this one. Traditional sambal fish will be prepared with ingredients like shallots and lady fingers which is absent here.

It is not that it is not good. It is delicious but it is just that it is kind of hard to accept that this is sambal fish. This is how sambal fish is supposed to look like.

For dessert we decided to try Cendol ($5.50). This looks more like Ice-Kacang than Cendol if you ask me. Really, ask any Malaysian and they will say so. Sigh … see how cendol is like here.

You see, for cendol you must have lots of the greenish phlem looking stuff. But here there are so little of it amidst grass jelly and red beans. The cendols were too short and too artificially colored.

Also, for sweetness, it should come primarily from gula melaka but here there is both gula melaka and rose syrup. 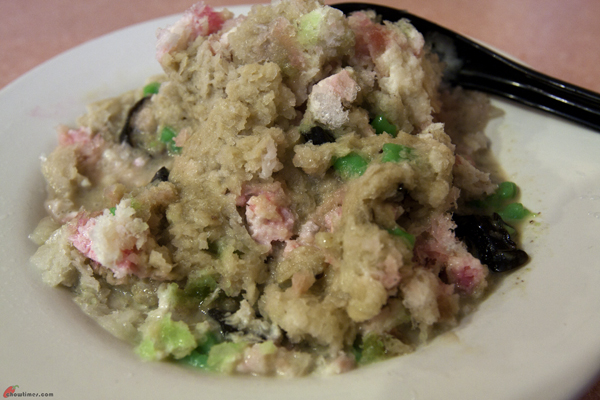 Both Arkensen and Nanzaro refused to eat this. We were surprised because it is cold and naturally sweet. I guess they have their own perceptions on what is delicious.

So we asked them why they don’t want to even try a spoonful. Know what they said? The reason Arkensen gave was it is dirty ice. LOL! Nanzaro said “yeah” and gave us his cheeky smile.

We also got the Kuih Dadar ($5.50). It is pandan flavoured crepe wrapped with shredded coconut and palm sugar. It came with six rolls like the one above. I like that it is served warm but the best we had tried for this is in Tamarind Hill (in New West and North Vancouver).

The conclusion: I would call the food here “ho-jiak” (delicious in Hokkien) but the food here had been “regionalized” to the point that some of the food are half like the dish it is supposed to be. Let’s just say that it will be a long while before we will contemplate driving all the way to Surrey for Malaysian food.