Taste Good Wonton is a name many of you have not heard of before. But if I mention the name Wonton King, I think that name will resonate with many.

We had blogged about the previous incarnation of this restaurant before. Twice as a matter of fact. The first time was with ChubbyPanda when he came up to Vancouver. We had the award winning soup which I still remember to this day. The Chicken Wine Soup was one of the earliest CRA award winning dishes that I tried and since that dish I made an attempt to try every award winning dishes.

The second visit was just last year. That was when the 8GTCC (Eight Great Traditions of Chinese Cuisine) team was doing some tasting for the 8GTCC Cantonese dinner. A few of us went to Wonton King to try the Chiu Chow Poon Choi (Big Bowl Feast). It was quite an unique experience.

Wonton King had it rolling even as early as 1 year back but from my perspective, it began to slide. Before we know it, it closed.

Suddenly. Without a warning.

I can’t remember who now but a friend of chowtimes alerted us a while back that there is a new restaurant in the location of Wonton King. It is called Taste Good Seafood Restaurant.

It is quite a strange name and the English name sounded like a step backwards. It felt that they tried to exude some kind of class by injecting the word “Seafood” in its name but pairing it next to the word “Wonton” seems out of place.

So we went over the Christmas holidays to check this new place out. Back in my mind, I wanted to find out if Taste Good Wonton and Wonton King has any connection at all.

I found the VCH report in the October 2009 (see here). Anyway, the report stated they were required to close for a few days due to the following reasons:

What was very interesting was the “Operating without a valid permit” line. That is something I had never seen before. So I think the sequence of events may have that they were caught without an operating permit in October 2009 and continued to operate until after our 2nd Poon Choi visit in August 2010 before they removed the Wonton King name.

I think that is what happened. Anyone knows more or can verify this?

We walked in and there to greet us was the same old familiar wait staff faces from Wonton King. The place is a tad bit better than the last visit 5 months ago.

The restaurant was half full that night we were there which happened to be the Chinese mid winter festival. We were expecting a fuller house but then we know that the closure of Marine Drive that few weeks could played a factor too. Some of you might remember there was a huge sinkhole on Marine Drive the weeks before Christmas. Yeah, it appeared right in front of this restaurant and the city closed the entire section down. We had to drive through a gas station and against the traffic to get to Taste Good Wonton.

They had put in a few new touches. There are flowers on each table. The table cloth was embroidered which I thought was classy. But other than these small touches, they are by and large the same.

They served salted peanut as free appetizer. Nothing fancy really. A bit “lau foong” already. The tea pot was on the table instantly. This is one of the rare times when Arkensen and Nanzaro does not immediately ask for “two glasses of ice water please”. They don’t particularly like Chinese tea.

That was an opportune time to talk about “Tea Pot Duty”. So I told Arkensen that he being the eldest son, it is his responsibility to pour tea for everyone. Nanzaro was pleased when I said that and tried to irk his brother as he always does.

“Yeah, Goh-goh, yeah. Listen to dad”, smiled Nanzaro. Arkensen gave him an evil stare that says something like “you are gonna get it when we get home”. Both of them DO fight at home but they always do that behind closed doors.

But Nanzaro actually did “tea pot duty” that day although he did say “this is embarassing!”. Things to remember:

Hehehe … it was good to see him doing it. However, that was only a flash in a pan though. He had not done tea pot duty since that dinner.

Their menu is almost completely identical to Wonton King’s … the most notable differences is the prices. They are higher now – about 5%, sometimes 10%. I compared this menu above with the old Wonton King menu I had at home.

Yup. We have a box which we keep all the menus we collected over the years.

We started off with a dish called Cod with Tofu and Garlic Hotpot ($13). It had been a while since we had hot pot like this. We used to order this sort of dishes a lot, particularly tofu hot pot. Our boys love it. To us, it is comfort food.

Besides the cod, this hot pot also has BBQ Pork and Mushrooms. What we like most about the hot pot is the …

“jup” (the juice, the gravy or whatever you call it). There wasn’t a lot of “jup” that you can drench your rice with but it is sufficiently enough to add taste to steamed rice. 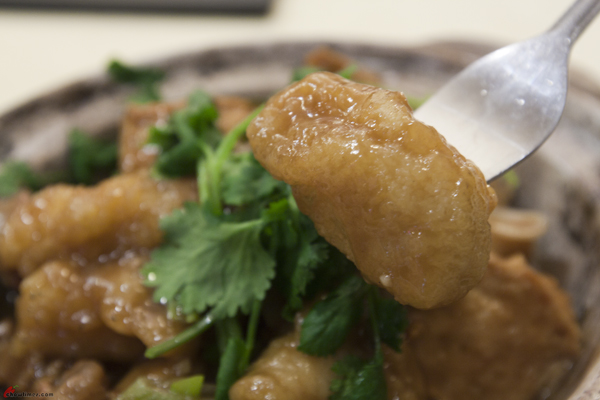 This dish was very good and we all enjoyed it. The cod was boneless.

You know, I can’t recognize the fish in dishes. I can’t tell cod from bass from trout if you show me the dish. Am not there yet but am gonna get there someday. For a start, I can recognize salmon and tuna.

*giving myself a pat on the back*

The name cod reminds me of the collapse of the cod fishery in eastern Canada. Although I know very little of that issue, it does remind us the problems over fishing brings to the industry.

The next dish we ordered had a name that we like: Pork Toro Slices and Black Fungus with Lotus Root ($13). It has some of the ingredients we like.

BTW, pork toro is pork cheek. This dish turns out to be nothing great about it. It should have been not difficult to make this dish I guess.

I think it is the sauce which although it looked good (color and all), it was bland.

The black fungus (or some people call it wood ear) by and large is not meant to deliver much flavour anyway. People only want it for the crunchy texture. This is unique in that it is crunchy no matter how you cook it – steam, boil, stir fry, any way.

I think that is only what it is good for. 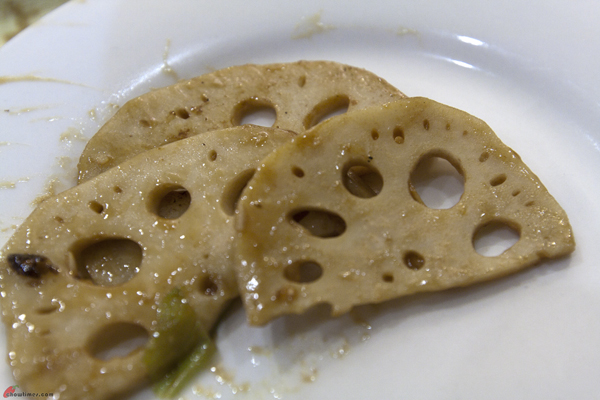 The lotus root tasted a bit old and soft. I like it crunchier.

My mum likes to make “ling-ngau tong” (lotus roots soup) at home a lot. I enjoyed it when I was young and looked forward to have it for dinner. That reminds me that I had not have this for a long time already. Suanne did make it a couple of times the past few years but truth is, it is not like mum’s. Anyway, my mum is too old to cook these days. So yeah, I am missing the “ling-ngau tong” in my life.

The lotus is an amazing plant. They have four distinct parts and each of them grows in different medium. It’s kind of hard to explain that but anyway, all the parts of the lotus (the flower, seeds, leaves and roots) are used for making different food.

A trivia: the seed of the lotus is known as the hardiest seed in the world. Archaeologists had found seeds that are 1300 years old which can still be used for seeding.

We had been yearning for spicy Sichuan food of late. Even though we know this is a Cantonese restaurant, we went ahead to order a spicy dish.

So we got the Sauteed Chicken Slices in Spicy Szechuan Chili ($13) and asked that they make it medium spicy.

It was quite a disaster. This is not Sichuan. This is a Cantonese take on Sichuan.

We were looking around the dish for the tongue numbing Sichuan peppercorn. Nyada … we can’t find any. Instead, the spiciness came from the black pepper. We were wondering why they even ask us how spicy we wanted it in the first place. 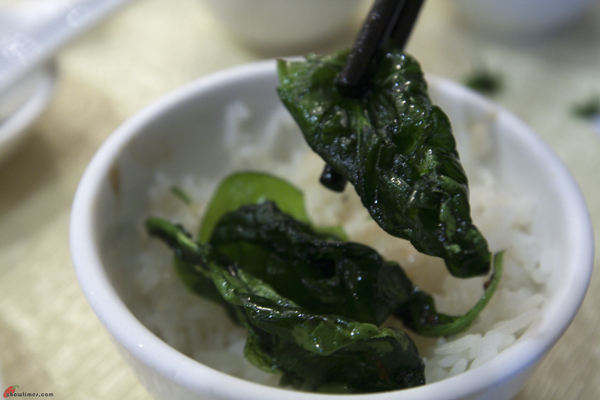 The only thing good was the deep fried green leafy vegetable which is translucent. We are not sure what it is though but they are very good (even though a tad too oily). Even Nanzaro ate this.

They are deep fried to a crisp and has this slight hint of of sourness. It is nice on rice.

Instead of being spicy, this dish is more sweet. The onions should not be there at all. Instead, they have lots of it which spoils the dish for us. It made this so-called “spicy Szechuan” dish too sweet.

I remember someone commenting that onions is used by restaurants as fillers to bulk up a dish cheaply. This sure felt like it.

On hindsight, we should have stuck to their normal Cantonese dishes and not tried to be fancy getting what we had.

The free red bean dessert soup was good. It is thick’ish with a tangerine peel flavour.

The talk of the day at the table was about drinking, beer in particular. I think my little guys are moving into the age when they start encountering this issue with their friends. Alcoholism wasn’t a big problem in Asia when I was their age but for some reason, I think it is something that we have to keep on top of in Canada. Alcohol is a social drink which I think many youngsters feel they need to have in order to fit in. To me beer or the occasional drink is not a problem but everyone starts with a beer and if uncontrolled, it could lead to problems.

Arkensen said that it is not a bad thing to drink beer and that it’s OK once in a while. He is the older boy and so I am sensing where he is coming from. Nanzaro, being still the baby in our eyes (!), declared that he will NEVER drink alcohol. Time will tell, right? 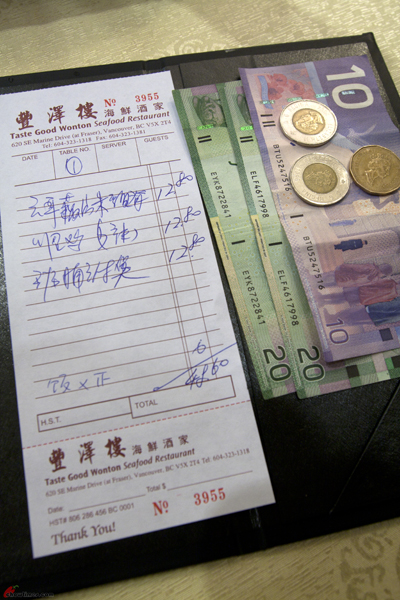 It is cash only. This dinner wasn’t as good as we expected. I don’t know … I felt that Taste Good Wonton had done nothing to arrest the perception in me that they are no longer the good restaurant they used to be when they won awards. Our last two dinners here (the Poon Choi one and this one) did not leave a good impression.