Many of us likes to root for the underdog. I am one of those.

When LotusRapper left a comment last month about BT Cafe, he was describing how this little known restaurant is new, small, the prices are cheap, the food is solid and is run by a young couple. Then JJ chimed in and said that the young couple is trying their hand at owning a small business for the first time. The husband is in the kitchen and the wife runs the front of the house.

At the back of my mind, I was conjuring in my that perhaps this young couple had put down all they had to start the business. As you know, the restaurant business is not the easiest to be in. It is expensive, it is risky and it involves long hours. Most restaurants even work 7 days a week. In short, it takes every single ounce of energy from one to start fresh.

This is one restaurant that I like to visit. For me it is not always about the food or the ambiance or the service. It is also very much about the people behind them. I want to go check them out and write about them. I want to see if there is a chance for me to give this fledging new business a leg up.

When we visited BT Cafe over the Christmas holidays, they had opened for just over 2 months already. They are located on Kingsway just east of the intersection of Fraser. As a matter of fact, they are just a few doors away from Nine Dishes.

This section of Kingsway is kind of quiet. It is not at a section where there are a lot of restaurants because it is almost at the western tail end of Kingsway. So, location wise, this is not a place many people would go if they want variety. The food actions are further east.

The awning outside does not look particularly inviting. It is so plain and devoid of any creativity at all. Yeah … the name is one of the simplest, unimaginative name I had come across for a new business. 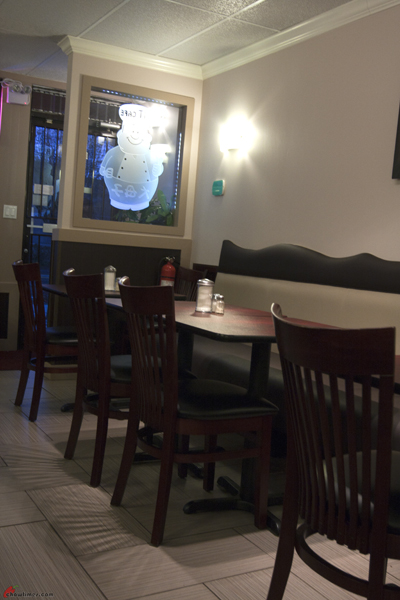 What we saw outside and what we saw when we walked in are like night and day. It is clean, neat and modern. It certainly has a more pleasant dining atmosphere than many HK Style Cafe you see around town. So we were glad to see that.

Suanne and I got there at 2:30 PM. It was at the tail end of their lunch hours. We were expecting that this restaurant is empty. However, what greeted us was a half-full restaurant with most customers about to finish up.

Their menu is big. The difference is there are not many specials. Most HK Style Cafes have many supplemental menus of their specials but for us, we were given only a one-pager with just three items on it (the white one on the top left above).

All combos are in the main menu. There are a lot to chose from. What jumped out at us was the prices. They are cheap. You can get a complete set meal combo (with soup and drink) for $8. A lot of their other combos (with drinks only) are $4 to $6.

Service was genuine and very friendly, exactly as we expected to find. The waitress took time to speak to us about their menu. 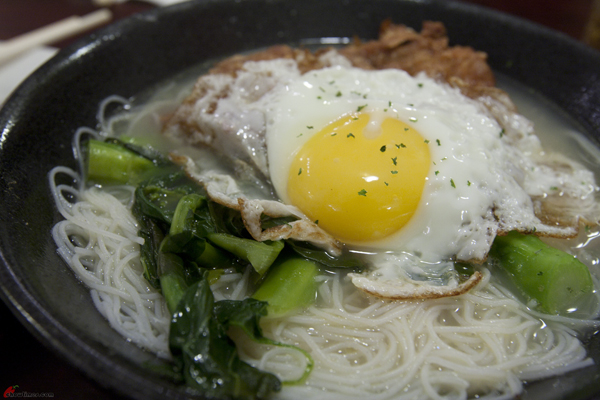 I ordered the Chicken Steak Fried Egg with Vermicelli in Soup which is just $6 and it included a drink. This item is found under the All Day Special combo meal.

At first I ordered something more expensive, similar to the above but on the other section of the menu. It was the other one with ham and I also wanted to order an ice milk tea which I ordered separately.

Instead of letting me go ahead and order the more expensive option, the waitress suggested the combo which is cheaper and includes a drink (except that it does not have the additional ham). Yeah, she won a brownie point from me for doing that.

It turns out that it was just fine without the ham … 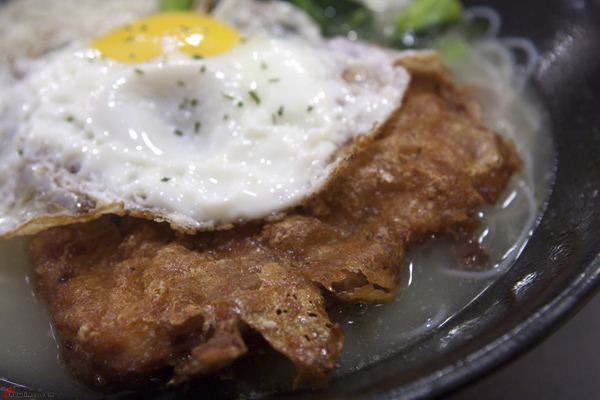 I was aghast because it was half soaked in the soup!

I had to quickly rescue that piece of chicken from the soup. How could they? LOL!

It was sooooo good that I can think of is the chicken and less of the sunny side up egg and the noodle soup which was quite solid. But it was the chicken steak that is what it is all about.

The chicken stayed crisp (thank goodness). I jokingly told the waitress that it is a shame to soak the chicken in the soup and it should be served on the side. If you come here and order this, ask them that the chicken be served separately, OK? 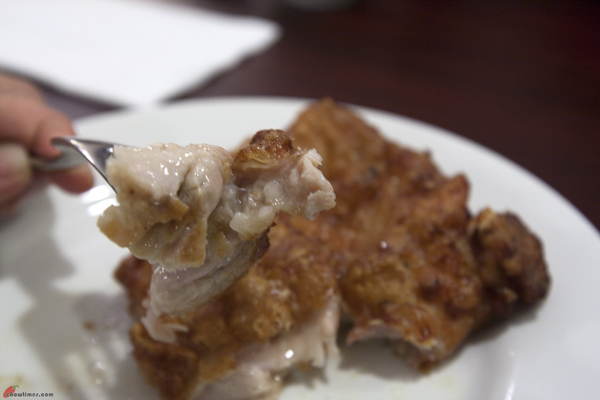 Look at the baby! Underneath the crispy skin, the meat was very moist and succulent. These pictures paint a thousand words. I need not say more.

The serving was large. Just see how big the chicken is and then see how big it is relation to the egg and the bowl on the pictures above. So this is definitely value for money, especially when it also included a drink.

I give this a thumbs up … a big thumbs up. 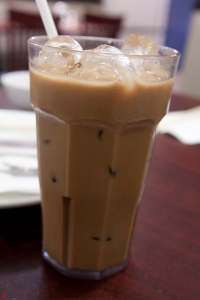 Here, you get to choose hot or cold. No extra charge. It is included in the combo price.

However, as you can see there is a lot of ice in the glass. 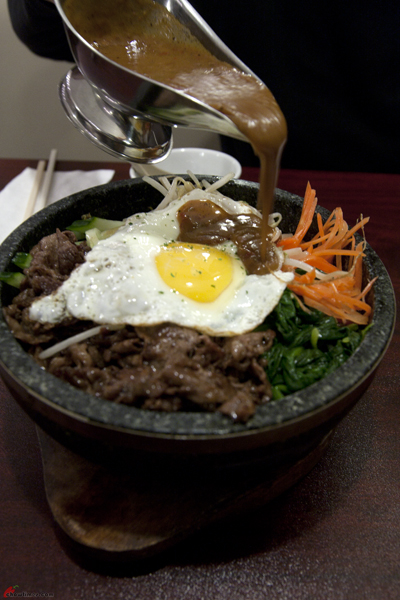 Suanne went for something you don’t see a lot of in a HK Style Cafe. She had the Korean Style Fatty Beef Stone Rice ($7.50).

In their menu, they have other variation of the same dish. That includes Teriyaki Chicken, breaded pork cutlet, Unagi (BBQ eel), Japanese style BBQ pork, diced prime rib in special sauce and pan fried prawns with whole scallops. All of them are the same price except the one with scallops is $8.25.

And then you get to pick from a choice of sauce including hot and spicy sauce (which Suanne had), Teriyaki and Satay.

The bowl has enough “lieu” to give this a thumbs up. There are lots of julienne cucumbers, carrots, spinach and bean sprouts. Actually there is not much flavour except from the sauce.

The egg, I like the egg. Suanne doesn’t eat eggs and so I ended with a second one that day. I was talking to someone just the other day and I was told that one should have only one week per WEEK! Is that the recommended intake?

Not that I care about this anyway.

The other thing we like is the gai lan which I think is a more pricier vegetable.

This place is cash only. I like the prices as it was only $15 for the two of us. BT Cafe is quite solid and there is very little that is not likeable.

You know what BT stands for? It is Big Thumb. I told the waitress that they should name this the Big Thumb Cafe because BT sounded so uninspiring. She laughed and said that BT is easier for people to remember and say. I disagree. I am gonna call them Big Thumb.

Yeah, I hope some of you will make the effort to go check BT cafe out. I think for the price you pay, you will find a lot to like about them. Go and give them a leg up as they start their new business.