Chinese food is generally cheap. We can often get a good full meal for just $15 and that will be better than average. But there is one type of Chinese food that is uncharacteristically expensive.

It was just last week that I blogged about a hot pot restaurant and I suddenly realized how expensive it had been eating out at hot pot restaurants. So I did a bit of math out of curiosity. I wanted to see how much it really is for one person.

This is how much we spent averaged out per person (before tips):

So I was wondering how much it would cost to make it at home … like, much cheaper compared to eating out. 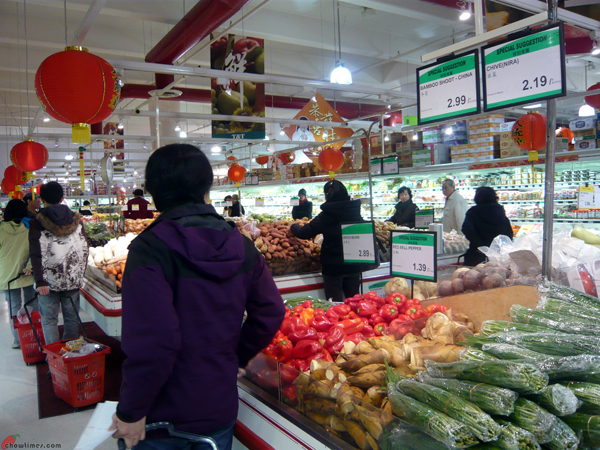 So that was our weekend project to get to the bottom of this question.

We did not want to go scouring around town for the best and cheapest ingredients. We took the easy way out. We went to T&T and try to get everything we need in one place.

We realize that some stuff in T&T are more expensive and that we don’t normally get some of the stuff we need here.

Hehehe … I did not bring my big camera into the store. Instead I brought a point and shoot so that I could steal a few shots of the inside. If I get caught taking pictures in the store, I would probably get thrown out.

We got a few of everything. We got … meat balls, sliced meat, vegetables, mushroom, sauces, hot pot mix. Just to make sure that we compare apple to apple, we also checked the prices of butane gas canisters and burners and pot too.

We got enough food for three people (Arkensen doesn’t want to participate in the project because he did not want hot pot).

For three people, I thought that it would just be $50 or less. But it turned out to be more than that. 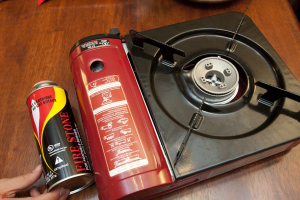 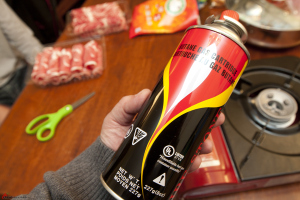 We already have our own gas burner. These types of burner is cheap. Just $14.

The butane gas is just $1.40 a canister. A canister is more than enough for a meal. 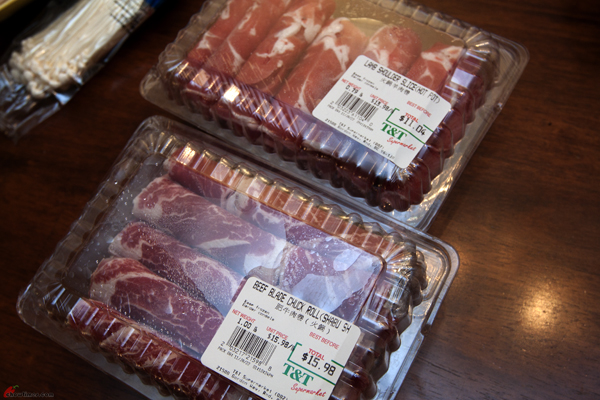 Of all the ingredients we bought, the meat slices were the most expensive and represent a big chunk of the cost. We bought roughly a pound each of lamb shoulder ($11.04) and beef blade chuck ($15.98). 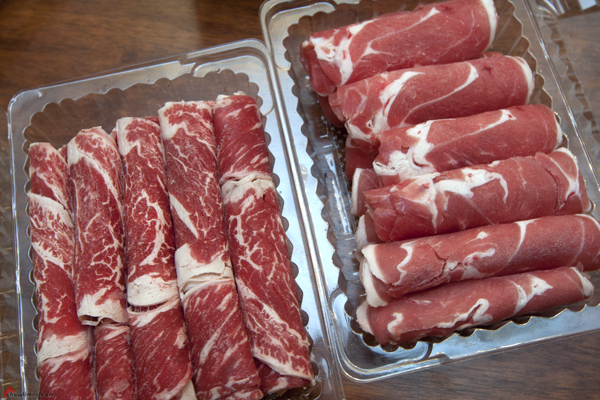 We were wondering why the difference in prices for the flat packed ones and the ones that are curled. We noticed that the expiry dates for the curled ones are about 1 week longer than the flat ones. So here is our theory but I need you to tell me what you think.

I think the curled ones are fresher and newly sliced. When they slice the meat, the meat are frozen and it will result naturally in curled rolls. They can’t hold this shape forever. After a few days, it will collapse and that is when the supermarket will repackage it to flat ones. What do you think?

If that is true, then next time you should look for hot pot restaurants that serve curled/rolled meat.

We were wondering if we were to get the meat from a butcher if it would have been cheaper. Anyone knows? 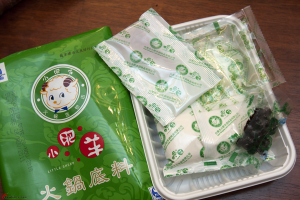 For the soup base, Suanne could have made it from scratch but we want to take the easy way out. We got the more famous brand, Little Sheep.

We planned to do a two soup hot pot and got one of each, spicy and non-spicy. This is cheap. Only $3 per pack.

We got half a pound of Fried Crab Nuggets which came to $2.50. The Stuffed Fish Bean Curd Rolls was $3.00 for half a pound. These two was from their fresh meat counter.

As for the Fish Balls with Mixed Seafood, they are frozen and comes in a pack for $3.00. We bought this because they have fillings in it.

Pound for pound these are way cheaper than the sliced meats. There are a LOT to chose from the fresh meat counter (like fish paste!). We could only eat so much and so ended up with these three types. 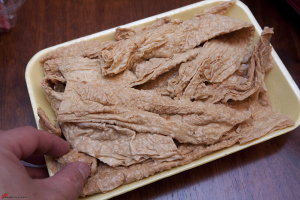 I did not want Udon but Arkensen wants it. This is $2.00 for 4 packs which we know we will only eat one pack. We also got the Konnyaku Noodles which is $1.50. 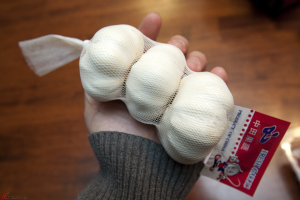 We also need the green onions and garlic to add to the soup base. The green onion was 60 cents only while the 3-piece garlic bag was 80 cents.

I don’t care a lot for the Barbecue Sauce but just for the sake of having a sauce, we bought this. This is the most well known brand, the Bull Head BBQ Sauce and is $7.00. 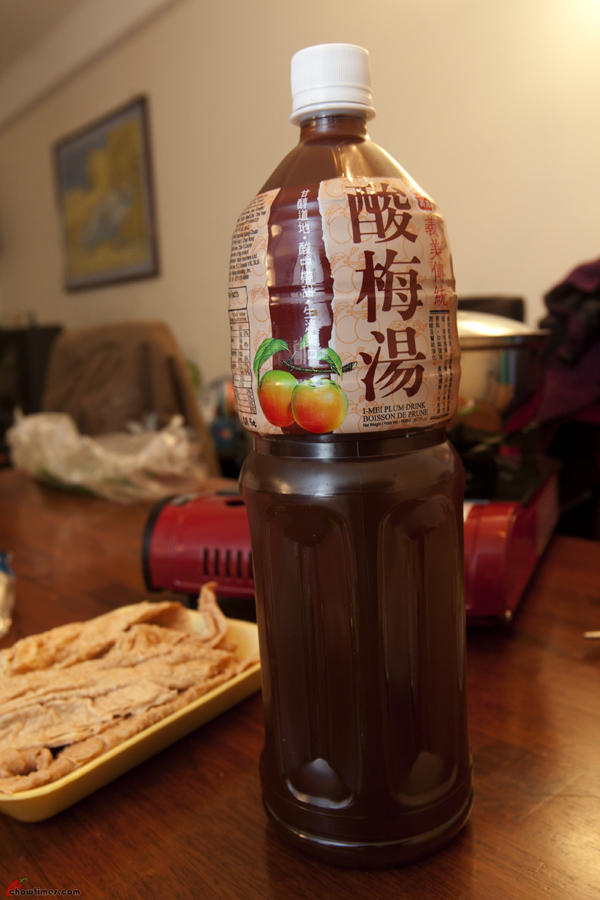 Again for authenticity and for the sake of comparing apples-to-apples, we also bought plum juice ($2.80).

OK. That is all that we bought. I’ll give you the totals later on this post. We are set … 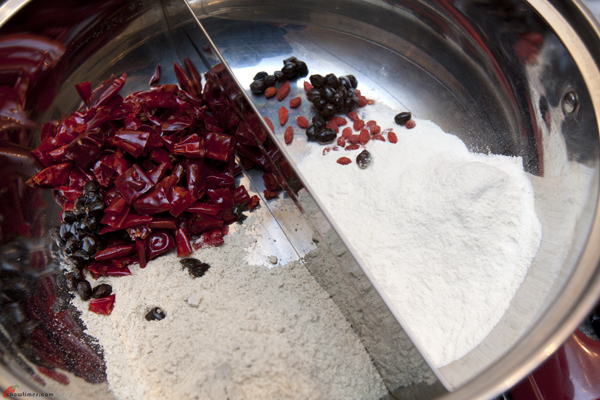 We pour the contents of the soup base into the two sections, one spicy, the other not. We put everything in except for the oil. 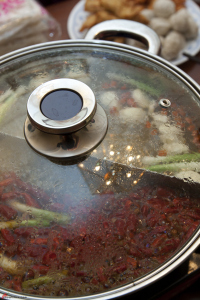 To save on the gas canister, Suanne pre-boil the water. First the boiled water, then add in the packets of oil. Close and let boil … and we are all set!

This is the first time we tried the Little Sheep soup base. It was very salty. We reckon that perhaps our pot was too small for the two packets of soup base. 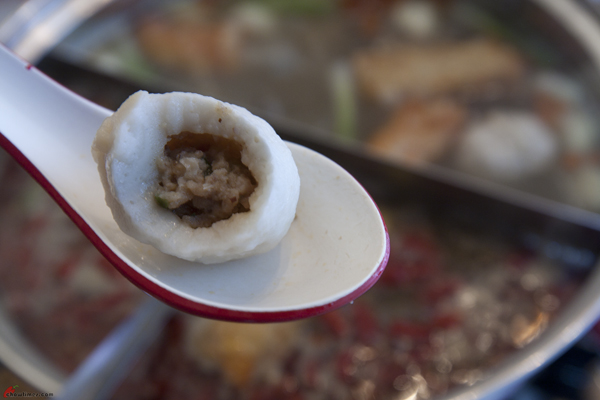 Here is the fish ball with fillings. This is not too good. If we had time, we would buy this from the stall in the Richmond Public Market which makes excellent meat filled fish balls. And it is bigger and fresher too. The stall name of Fu Yuan Fast Food. You can see a picture of their fish ball here in this post.

It was a LOT of food and it wasn’t a lot of work since we bought most of the items all ready to be cooked. As a matter of fact we were all already eating 30 minutes after we got home.

At the end, we have quite a bit of leftovers. I was particularly surprised that we had so much beef left. The lamb shoulder was all gone because we like it better. The beef was quite tough even though we saw enough marbling on it.

So how much did it cost? 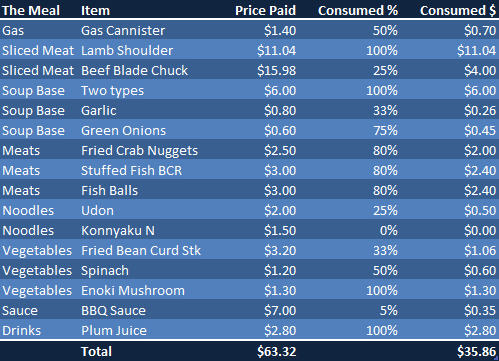 We spent $63 shopping in T&T for this meal. However, we did not eat everything that we bought. So we made guesstimates on how much we consumed and calculated the value that we ate.

Not bad, huh? Especially when you compare to at least $25.oo per person if you eat out at a AYCE hot pot restaurant. Please note that I am assuming you already have the initial one-time “infrastructure” outlay (eg. burner and pot) which will cost about $35.00.

Now, let’s do further analysis and break down the costs of each component. 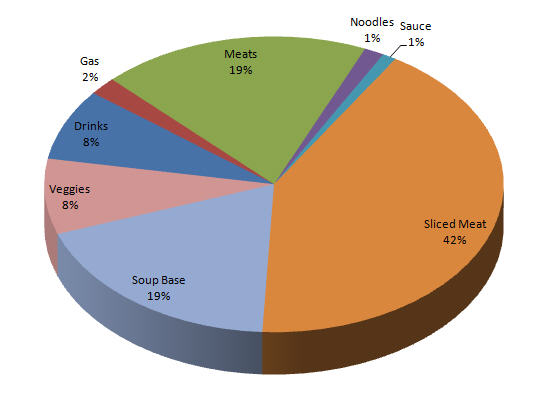 The pie chart above represents the dollar breakdown of the food we consumed.

The other surprising big item is the soup base which is 19%. This is easily addressed if we boil our own stock with chicken or pork bones. It is a bit more work just to save a couple of dollars. LOL!

The “Meats” represents the meat balls. I won’t save on this because we love it.

Cheh! Celaka punya orang! The sauce is only 1% of the cost and the restaurants charges us $1 per item! Guess I know now what their business model is. All AYCE hot pot restaurants are actually sauce and condiments restaurants in disguise. LOL!

So … there you go! It is at the very least 50% cheaper having hot pot in Chez Suanne compared to the AYCE hot pot restaurants out there.