This meal sure was a memorable meal. And totally unexpected too.

We dined with a superstar and other famous people … sort of. We were star-struck! 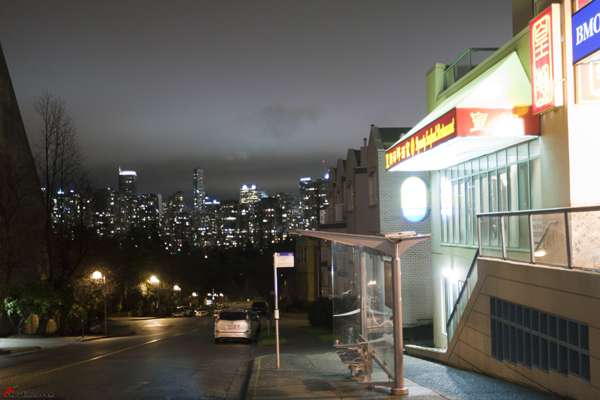 Suanne and I invited MadameYak and MisterYak to join us for dinner. We wanted to go check out another CRA 2011 award winning dish and since MadameYak so good at making conversations, we thought it would be great going out with them to this place.

I had never heard of Dynasty Seafood Restaurant before, not until they won an award from the CRA. They are located on West Broadway by Willow Street. From Broadway, you will likely not notice this restaurant at all. They are visible once you peer into Willow.

This restaurant has a great view of downtown Vancouver. Some of the window tables has a grandstand view of the bright lights across False Creek to the highrises in Yaletown. It’s quite a sight. 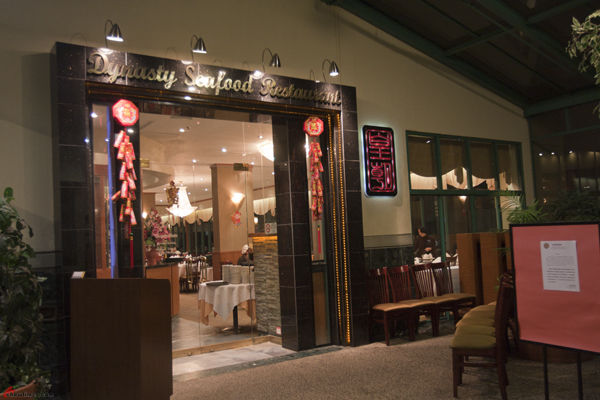 There are no street level entrance. Maybe that is why not many people knows about this place. Maybe it is just us only. They have an underground parking in the building and so that helps a lot because parking in this part of the city is not cheap.

It seems like a lot of famous people dine here. At least it was when we were there.

Our very own figure skating champion was there dining there. Gosh … don’t you think Suanne had a nice pose with Patrick Chan? Suanne almost looked like Patrick’s skating partner. Look at the pose … left feet forward in sync some more!

I am … so jealous! She did not have to smile THAT sweetly. Yeah, I saw how she gazed into his eyes.

I don’t even want to put my picture in the same photo because Patrick does make me look bad … real bad. However Suanne assured me that I am still more good looking than Patrick Chan. 🙂

So I guess this restaurant draws a lot of celebrities … and to think that I had never heard of it before. 🙂 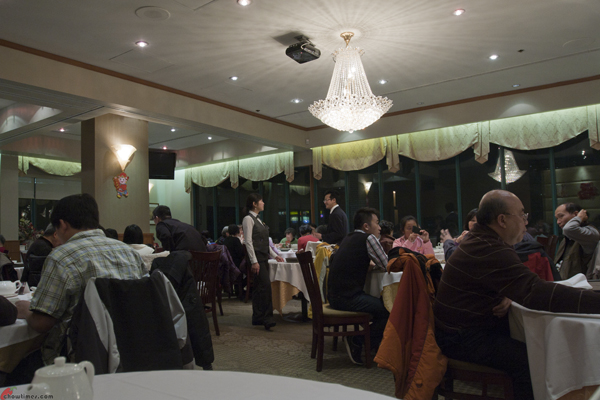 We were there on a Friday night. It was very busy and they managed to almost fill the entire dining hall which was quite large. We had reservation and so it was not a problem. It appears that reservation would be a good idea if you choose to dine here at busy times.

The setting is nice but not posh. I had seen grander looking places than this. Despite that, a lot of their customers seems well heeled and that is obviously supported by very professional service. The senior captains are suited and the rest of the wait staff are very well trained and exudes confidence.

Oh, walking in and seeing what I saw, I was already thinking that this place could be expensive. 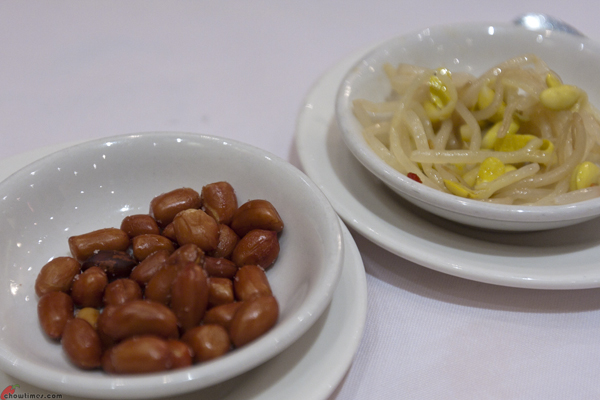 MadameYak and MisterYak was already there when we got there. We were late having misjudged again the traffic that day.

Waiting at the table was some simple free appetizers – salted peanuts and soy bean sprouts. Nothing fancy but at the same time we appreciate simple tokens like these. 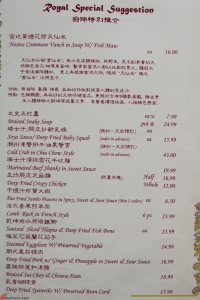 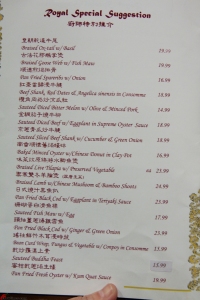 We were here only for their award winning dish. Other than that we focused our selection on the two pages of menu above. It is what they call their Royal Special Suggestions.

The selections were excellent. There are so many dishes that we wished we could order but there are just only the four of us.

The prices were quite OK too. I mean it is not cheap but it is definitely not exorbitant. The Royal Special Suggestion dishes are mostly under $20.00. 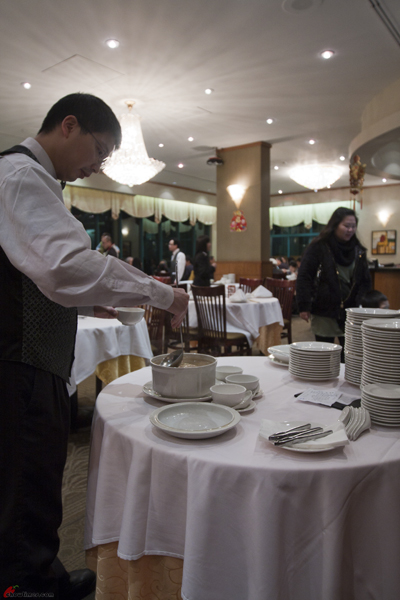 As I was saying earlier, the service was very good. Sometimes you go to a Chinese restaurant and you will find that the captains are knowledgeable and trained. All the other wait staff just brings the food and you hardly notice them at all.

Here it is different. It is not just the captain. All the wait staff that attended to us have that confidence in them. They were very confident in talking to us and they also knows quite a lot about the food that was served. How many times have you gone to Chinese restaurants where the wait staff had no clue about the dishes?

What impressed me was the small stuff. For instance, when we ordered three rice for four people, our waiter brought an extra bowl and told us that it’s for us to share the rice if we want to.

When the last dish was served, the waiter also told us that the “choy” is “chai sai” (complete) as a way to acknowledge. It’s the way it is said.

While he was separating the dishes for us on the side table, he was really comfortable talking to us and fielding the questions that we threw his way.

I am saying all these because I thought these are really simple things that every restaurant (Chinese particularly) would learn a thing or two which makes a huge difference to the experience of the diner. 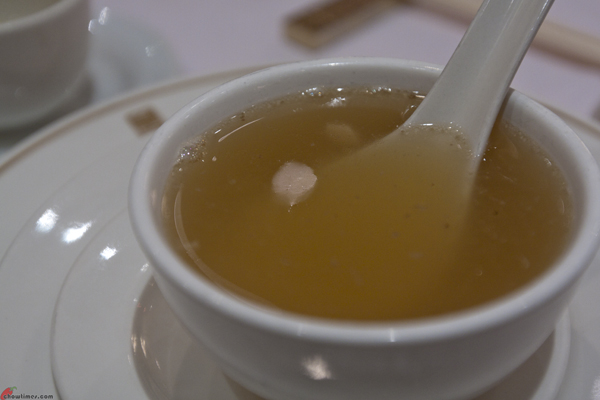 We did not even plan on getting the soup. The captain was good in talking us into getting their soup of the day. It was a manoeuvre equivalent to McDonald’s “do you want some fries with that?”

Soup of the day … isn’t that supposed to be cheap or free soup? Oh not here. We said yes to the suggestion after the captain told is that the soup of the day is the Sea Coconut with Old Chicken and Lean Pork Soup.

We did not ask the price for this but it turns out that this is $19.00. Not exactly cheap, huh?

Oh no. We are not complaining at all. The soup was excellent. The clear soup had good flavour and aroma with a slight hint of gingery taste. There are almonds too in it.

The serving yields eight bowls and so each of us had two bowls. Wished there were more. 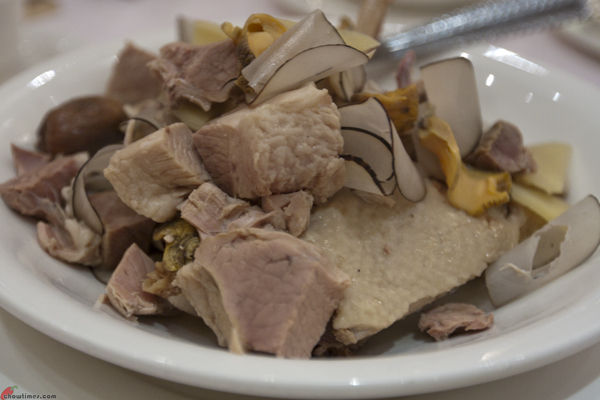 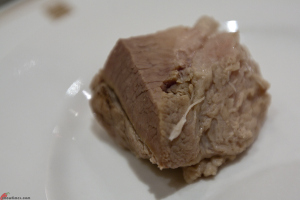 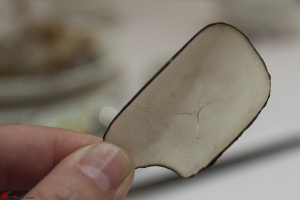 As they usually do with the ingredients, they were served on a separate dish. It does look good. The pork pieces were still whole and were not mashed up in a mess. Looks aside, they are pretty tasteless having imparted all flavour to the soup already. Soya sauce did not help much. This was hardly touched. The chicken was just only slightly better.

The picture on the bottom right is the dried sea coconut. It’s not meant to be eaten, I don’t think so. 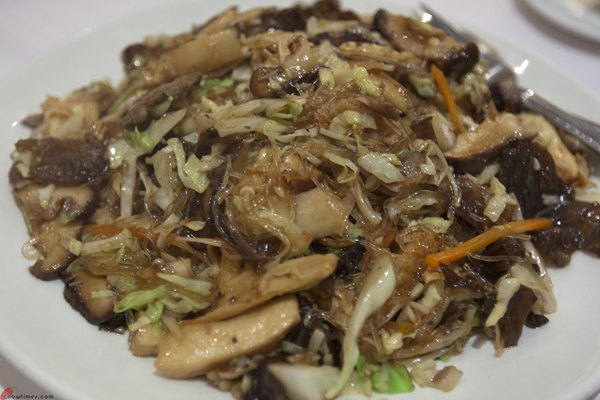 All of us agree.

What is special in this dish is that it is made with lots of ingredients. At least 10 is used and in some places they have up to 35 ingredients which could include bamboo shoots, mushrooms, bean curds, tofu, gluten, noodles, fungus, green vegetables, etc.

This is also a traditional food eaten on the first day of Chinese New Year. Suanne makes this at home which we all enjoy a lot (see recipe here). Every time she makes it, she will make enough to last a few days. Her version is the common wetter version.

We did not even bother to identify all of the ingredients. Too much in it! It smells good though which is dominated by the smell of mushrooms. They served us some pickled daikon on the side. 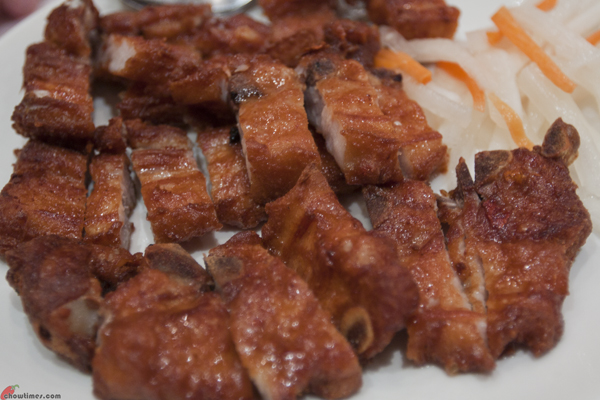 We love this one. The Deep Fried Spareribs with Preserved Bean Curds was also $16.00. 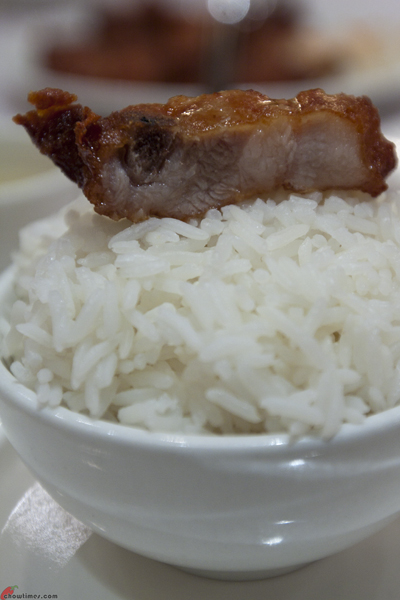 Anyway, I noticed that the deep fried spareribs were all consistent in that the bones are small and to the side while the meat was good for two bites. It tells me that they chose the cut used for this carefully. So yeah, it had to be eaten with hands. 🙂 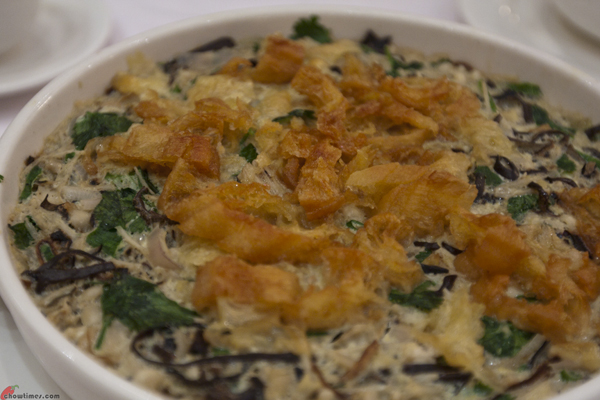 The Baked Minced Oyster with Chinese Donut in Claypot ($17.00) was also listed under the Royal Special Suggestion section of the menu. We ordered this because we liked the sound of it.

We thought it would be a claypot dish. This is where we are supposed to have my all important “jhup” dish. But this so-called claypot is more of a steaming dish. LOL!

So this is a dryish dish. It has a strong orange peel flavour and in it are also wood ears and some greens. And of course there are the oysters which is minced.

Quite good but because of the disappointment over absence of “jhup”, I am hesitant to say it is great. It has an interesting combination of ingredients for sure. 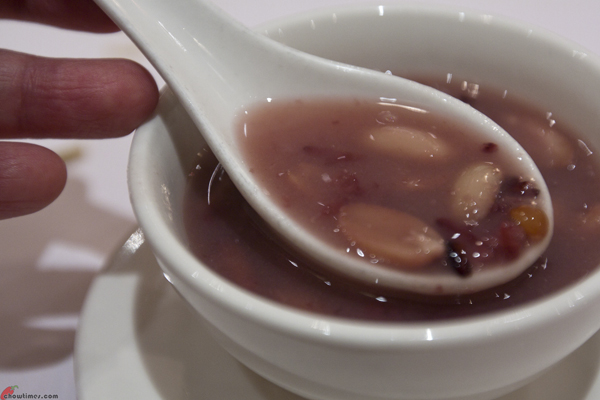 Other than the free appy snacks, they also gave us free desserts. This one is really good. Certainly better than the red bean soups that other people gave us.

They call this the Four Treasures Soup. The four treasures refers to the peanuts, red beans, green beans and black glutinous rice. 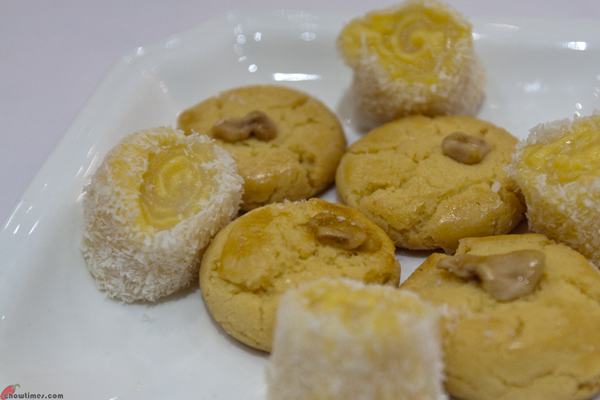 So we sat and ate and yakked. There were so much to talk about, mostly things of Malaysia and Singapore … about the food there, the life there and all that. We enjoyed exchanging our travel culinary vacations with MadameYak and MisterYak. They are seasoned travellers and have a very extensive well researched list of places to eat in cities around the world. That would come in handy for us the next time we embark on another culinary vacation.

We stayed quite long and almost until the closing time. Some restaurant will stop serving us if they see us staying so long (i.e. they will get tired of filling out tea pot again and again!). But this place is different.

They asked us if we wanted cookies adding that they are free. Well, of course!

The almond cookies above were served warm. Nice. I am not surprised if they made it in house seeing how warm it was when it was served. The other one is a chewy dessert.

Not many restaurants do this anymore but they gave us warm towels. I like warm towels. It was just because MadameYak and MisterYak is there otherwise I would wipe my face with the warm towels. LOL! I know, I know … I am so uncouth.

But wiping the face with warm towels are so refreshing! 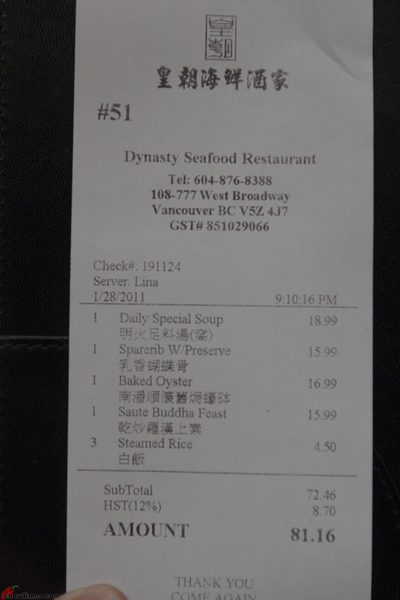 Not cheap considering what we had. Nevertheless, we enjoyed ourselves. My work had been quite brutal these days with early hours (I woke up at 3:00 AM yesterday to go to work!). So this Friday dinner was exactly what I needed. For the first time that week, I felt so relaxed although I was also dead tired (which I think MadameYak and MisterYak might have noticed. Sorry!). 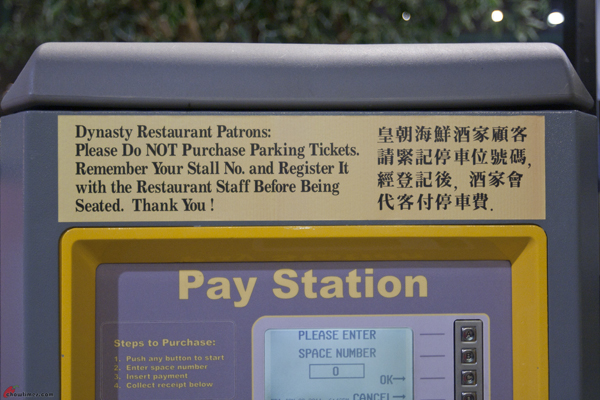