As I was loading the pictures for this post yesterday, I was marveling at this picture below. 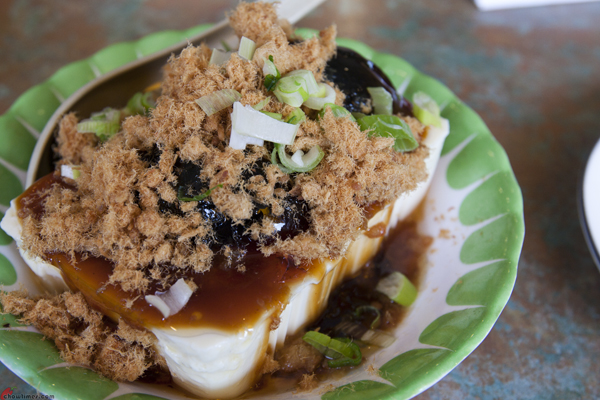 I was thinking how amazing it was when we had this. The simplicity of the dish and yet it is delicately complex. The entire process that goes into making this involves techniques that one takes for granted but not many cuisine would even dare to think of.

And then while I was loading the pictures, I came across a website which has a picture of a bag of Pork Floss and under the picture it says something like “Used for getting bacon out from between your teeth!”

It was then I realized how repulsive (for the lack of a better word) the dish above is to other cultures and yet to me this is considered a delicacy.

What I like about this is also that this is cheap. This is called simply the Preserved Egg with Tofu and is $3.50. This is a cold dish and the tofu is sometimes chilling cold when served. 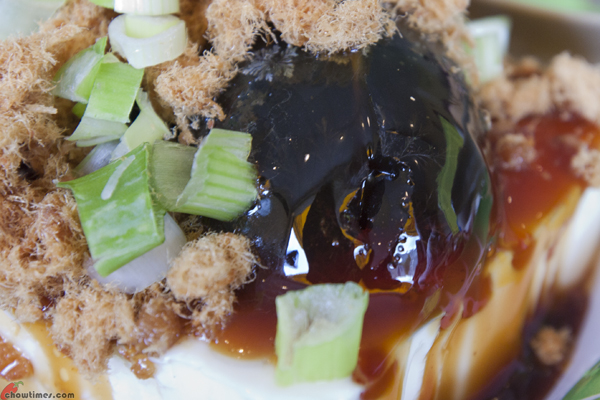 The thing that is strange to non-Asians is the … fluffy stuff called Pork Floss and the black jelly-like thingy which is an egg.

Suanne had made Pork Floss at home before and even has a home recipe for it. You might want to check it out here. Actually Suanne also has a recipe for this entire dish here too (not just the pork floss recipe).

Maybe it is the name “floss” that is inappropriate here. You know, I am not sure how the English word floss came about for this but it is a well known word used to describe it. Anyone has a theory as to the genesis of that name “floss”?

Pork Floss is basically dried out pork meat fibers. You just gotta forget how it looks and the name of it and try it. I am pretty sure that if one gets past that, 99% of you will discover that this is indeed a marvelous food. 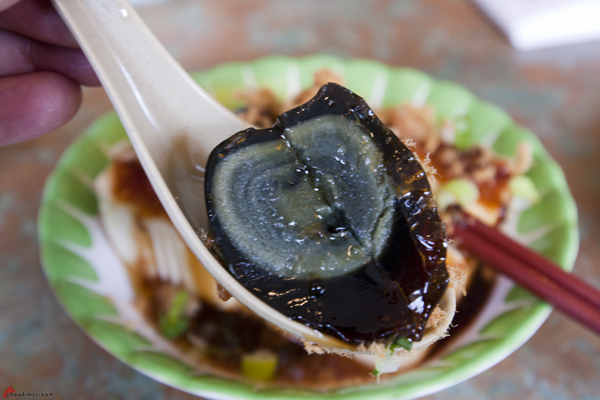 I think the more difficult thing to digest is the preserved egg above. We call it the century egg making it worse because it evokes thoughts that these are eggs left to rot or something for a long time. I mean, one would have thought that the blackness of it is because it is eggs gone bad.

But really, it is not too bad. The egg white turns translucent and into a jelly like thing. The yellow yolk became grey ash. And the taste turns “interesting”. It is like but not like eating jelly with a creamy center. 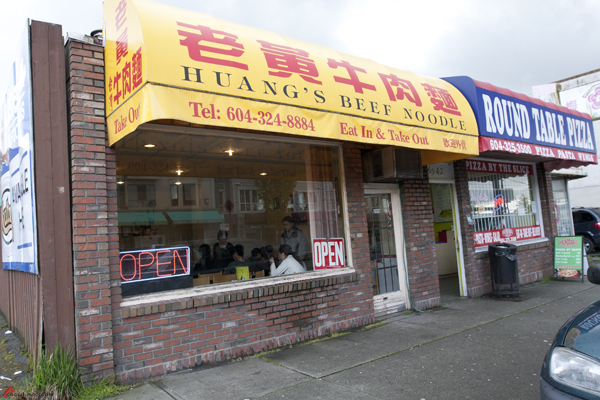 We had this at the Huang’s Beef Noodle restaurant. I had passed by this place many times and several times I noticed that it was packed and people were milling outside like they were waiting for a table. So I took a mental note of this place thinking that this has to be a restaurant worth checking out.

This restaurant is located on Victoria Drive and East 54th. When Suanne and I came here, we did a crazy thing. We parked our car way down on Victoria Drive and SE Marine Drive. That walk is about 1.5 km with a 700m elevation gain. Hehehe … we wanted to have a little workout before a meal. Gosh, I think we are getting old — we are actually enjoying long walks with each other. 🙂

This restaurant is really tiny. Basically a hole in the wall and seats only 20 people, cramped. It seems like a lot of their customers are living in the neighborhood from the casualness of the way most dressed.

And yes, there were people waiting for a table every now and then. The wait is never long though. People come, order, eat and go. So the tables turn fast. 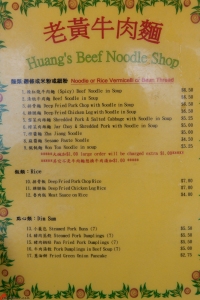 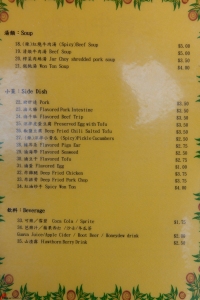 Their menu is a simple two-pager. Knowing the name of this place of course we had our mind set in Beef Noodles. Their prices are cheap as expected.

Besides the menu above, Suanne saw there are combos of the side dishes on the wall:

Sounds good. I would probably have ordered these if I knew it earlier. 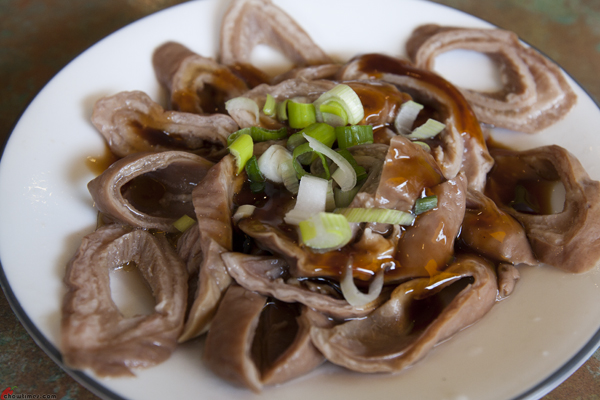 The Flavoured Pork Intestine ($3.50) is another of our favourite appetizers. You guys know about this if you had been following chowtimes. It is just that I can’t resist ordering this every time I see it on the menu.

The serving here is small and is just so-so. I think it would be better if only the intestine was of the thicker cut. 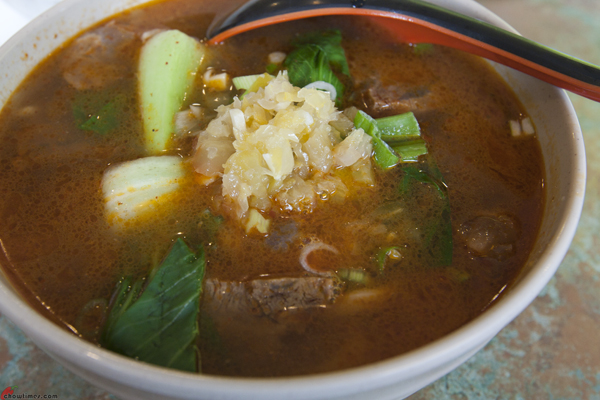 We got the spicy version. At a glance it did not look as appealing and inviting as some that I had seen. I had seen must better ones. Do you guys remember this poll I did called “The Most Favourite Taiwanese Beef Noodle in Vancouver”. You can see the results of the best Beef Noodle restaurant in Vancouver in this link here.

Huang’s beef noodle soup is topped with chopped sour mustard. There were some Shanghai bok choy. The broth was quite spicy. It is not bad … but it is not terrific to me personally. Hehehe … adding the word “to me personally” so that some of you don’t get too emotional with me when I did not say “It is GREAT!”. This is called defensive writing. LOL! 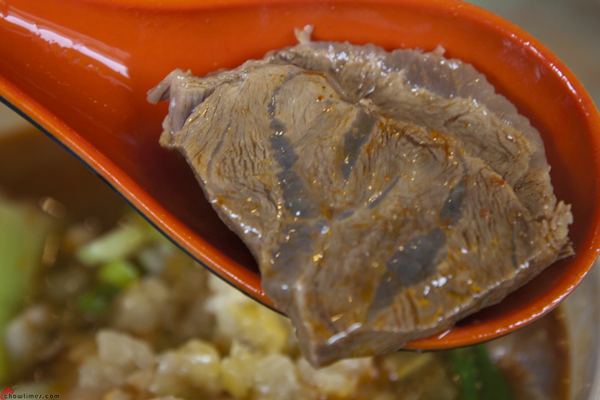 What do you call this part of the meat with lining of tendon like stuff? Not flank right? I like this cut of beef. It is tender and not too fibrous like the flank. I don’t like flank because it gets stuck between my teeth and drives me nuts all the time. 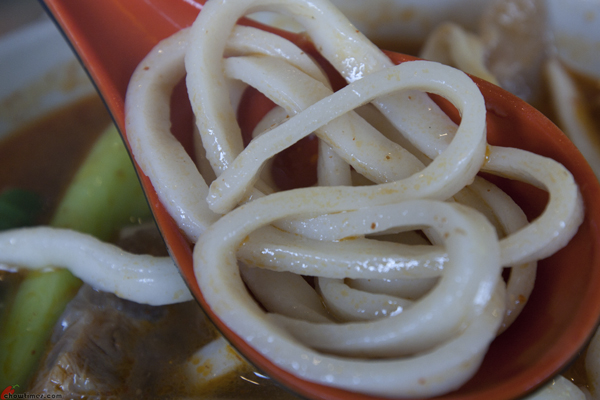 The noodles are the thicker type. As a whole, this beef noodle is decent. Judging by all the people who ordered this, I guess it must be good to some people. Just not my type. 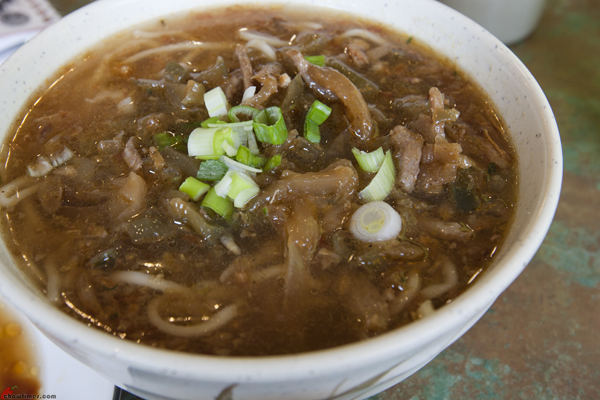 For the second item, we decided on Jar Choy & Shredded Pork with Noodle in Soup ($5.00). I felt that this is pretty heavy in MSG flavour and quite salty. Suanne likes it and so I left most of this with her. Yeah, we often share food and we swap dishes midway. Gross? Not to us! 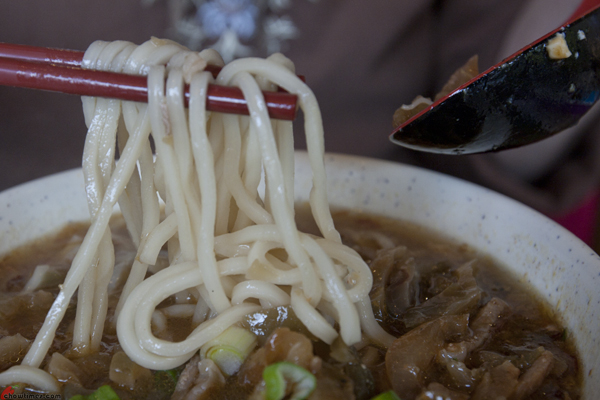 The noodles for this is the thinner type. 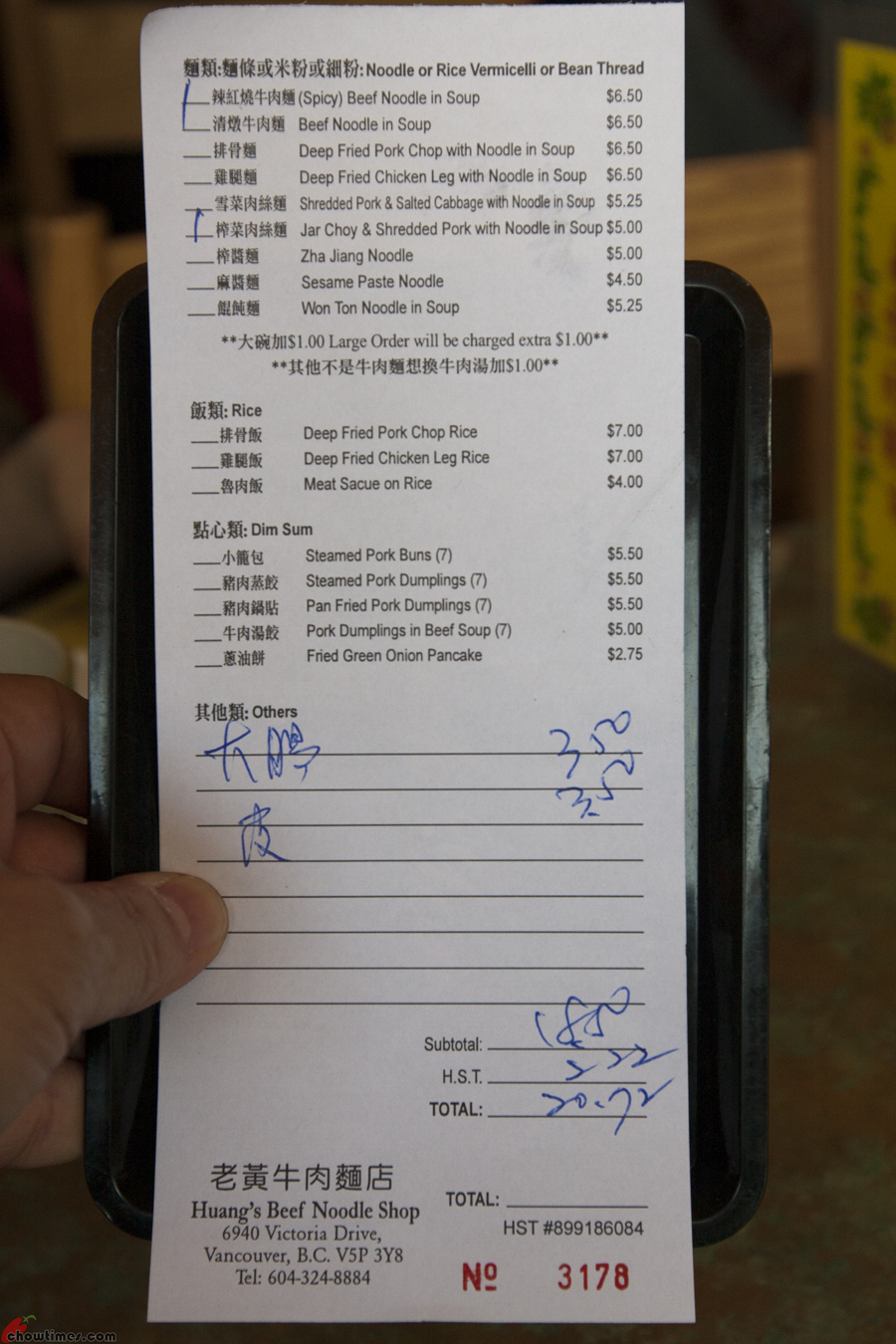 I am sure that many of you had been to this restaurants before. Tell me, what do you think of it. I wasn’t overwhelmed and so want to hear from you. Am just curious why it is so popular and maybe I am missing something here. 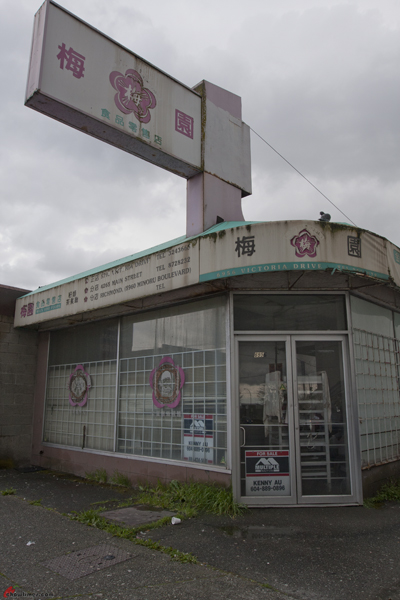 We finally know what people says when they talk about the original Mui Garden. Just a couple of doors away is this small restaurant with the Mui Garden logo. It must have closed a long time ago and given the state of the place no one had wanted to move into this space yet. So, now I know where the Mui Garden started from. Today Mui Garden has four locations around Metro Vancouver.