It was what I call a productive day. I took a couple of hours nap at the hotel after a full day of roaming around Beijing. The day started very early at about 7AM and by the time I got back at 4PM, I had covered the Beihai Park, the Lama Temple, the Bell Tower and the Drum Tower.

Surprisingly I did not sleep long. I think I was beginning to get used to long days on the feet. For dinner that day, I took a 10 minutes walk from the hotel to the Little Sheep Hot Pot.

It is the familiar logo, isn’t it? We have a Little Sheep Hot Pot in Richmond and I had even blogged about it here. One thing I find puzzling is that while in China, this chain hot pot restaurant is called Little Sheep while the restaurant in Richmond is called Mongolian Hot Pot. The Chinese name and the logo remain the same too.

This green round logo is so familiar too. There were quite a number of Little Sheep restaurants in Beijing. They all look high end and expensive looking, unlike the one we have in Richmond which was just so-so.

Yeah, I was kind of worried not knowing what to expect. The restaurant was quite posh. It is certainly one of the more fancier hot pot restaurants I had been to. Everything is sparkling clean. It looked like an expensive setting.

The menu was exciting. It was unlike the small 1-2 pager menu we have in Vancouver. It is like … a small book. With a lot of pictures. Each page only has 3-5 items but with big pictures. The prices are a wide range depending on the grade of meat you want. Believe it or not, they even have one item that is 600 RMB. That is a whopping $100 Canadian!! Nope, I did not order the expensive ones.

The service was great. One thing about the restaurants in Beijing is that they have a lot of waitresses and waiters. Labour is cheap, I guess. So I virtually have a waitress waiting next to my table ready all the time. She only had to take care of two tables. So, the plates were cleared fast, the soup constantly topped up, etc.

I spoke in English here and so my waitress know that I am not local. When I was taking pictures of my food, a man came over and told me no photos. You know what? The waitress interjected for me and told the man “Bu Yow Jin” and told him I am a foreigner. Hehehe … speaking English has its privileges.

I love the table settings. They have tables in every configuration. There are small tables for a small pot. There are round tables with a big pot in the middle. Listen to this: there are even big round tables where EVERYONE has their own pot!

Since I was eating alone, I have a small pot. It looked really small, isn’t it?

I ordered two types of broth. The waitress recommended this to me. One of them is called the classic and the other called mandarin duck. They have a lot more soup base types than I had come across in Vancouver.

The waitress was so helpful. She even help me scoop out the scum.

OMG. The soup base was awesome. It is so delicious that I … hehehe … drank a small bowl of it before it boils up. I read that the secret of this soup is the cumin in them.

The spicy soup was hot and yet it did not sear, no pain. Just the right level of spiciness and richness without numbing the taste bud.

Even the non spicy broth was good. You know that I had always focused on the spicy broth eating hot pot. But here I enjoyed the non-spicy version equally as much. 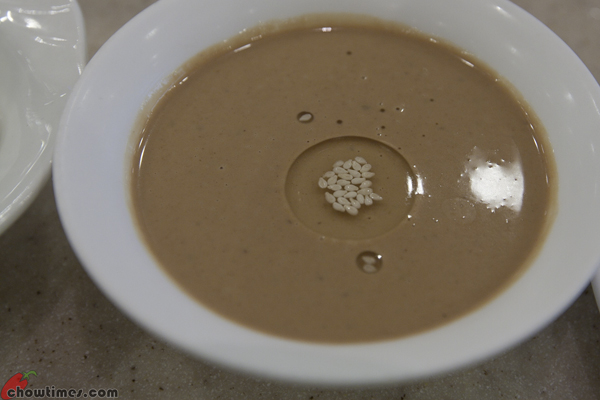 Oh I thought I get a dipping sauce too. Sesame paste is popular in Beijing. In the previous two hot pot meals I had here, I see a lot of people ordering the sesame paste.

You know what? I barely touched the dipping sauce. Don’t need it. The soup was more than adequate. If anything, the dip will just mask all the goodness.

Rather than picking my own meat, I opted for the combo for one person. I did not even know what type it was but I knew it had sheep and beef. Sheep shoulder was what I love most.

These are the cheaper type of meat but don’t they look beautiful?

I see that their meat are sliced thinner. Or at least they looked sliced thinner than the ones we had in Vancouver. The meat was soft and tender and cooked instantly.

The waitress also recommended tofu. It was an excellent recommendation. There are three types of tofu of different firmness and coarseness. They are the types that absorbs the broth well. Next time we make hot pot at home, we should get these type of tofu. These are premium tofu.

The big bowl of vegetables were a delight to look at. They were fresh and of high quality. There are some vegetables I was not familiar with …

… like this one. Does anyone know what this is called?

I actually enjoyed the vegetables. A lot. I am sure if you are here, honey, you can eat this and this alone!

The Little Sheep in Beijing is miles better than the one we have in Richmond. After returning from Beijing, we had dinner at the Richmond Mongolian Hot Pot and it was no where as good.

Guess how much this meal cost?

The total came to 149 RMB which is just $24 Canadian. Not bad. If there is ONE restaurant I want to take you to when we get the chance to come to Beijing, it will be to the Little Sheep restaurant. I know you will like it a lot.

BTW, did you know that Little Sheep is in the process of being bought out by Yum Brands? Yum Brands is the company that owns KFC and Pizza Hut. If the buy out happens, Little Sheep will be an US company and if that happens, I hope it will also mean more Little Sheep hot pots in North America. I think it is time that North Americans learn how to enjoy hot pot.