We went back to Hao’s home to drop off Xue and the toddler as Xue had to wait the older son to come home after school. Hao then accompanied us to the Parliament Hill for sight seeing. 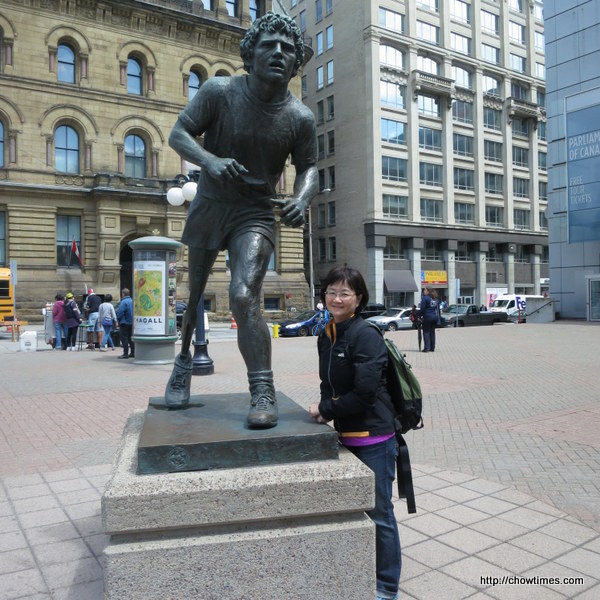 The statue of Terry Fox stands across from Parliament Hill. Terry Fox portrays courage and perseverance. He is a true national hero. 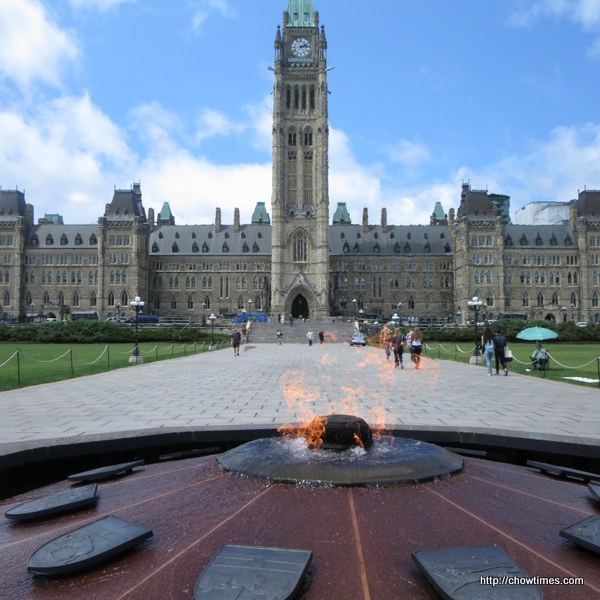 The Centennial Flame dedicated by Lester B. Pearson on 1st January 1967, to mark the beginning of the Canadian Centennial.

A side view of rear of the East Block.

The Library of Parliament at the building’s rear is a Canadian icon as it appears on the observe of the Canadian ten-dollar bill. The library’s collection comprises of 600,000 items and tended by a staff of 300. 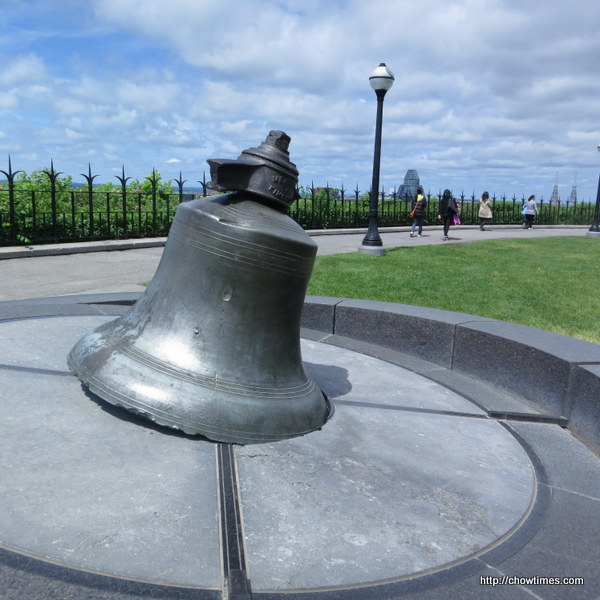 The Victoria Tower Bell was unveiled in 2000. It origins from the Victoria Tower. It is canted to recall the way in which it was found after it fell from its perch in the fire of 1916.

The Summer Gazebo was reconstructed from an earlier gazebo in 1995. It sat on the northwest corner of the English garden style, dotted with statues and memorials. The Summer Gazebo is inaugurated as the Canadian Police Memorial Pavilion on March 22, 1994 by Prime Minister Jean Chretien. The granite stone at the base of the pavilion is inscribed with names of officers killed while on duty. 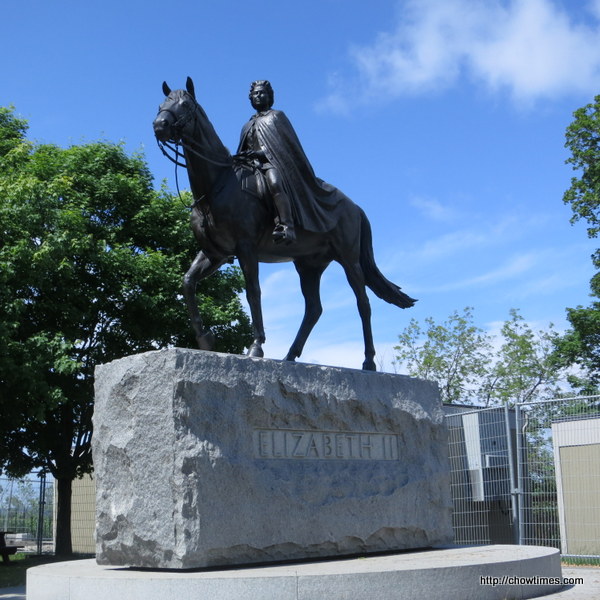 One of the statue is the statue of Queen Elizabeth II, sculpted by Jack Harman and unveiled in 1992, as part of the 125th anniversary of Confederation celebrations.

The Famous Five monument was inaugurated on 18th October, 2000. It is entitled “Women as Persons!”. It is a tribute to Nellie McClung, Irene Parlby, Emily Murphy, Loiuse McKinney and Henrietta Muir Edwards. These women won the “Persons” Case in a 1929 court ruling which legally declared women as persons under the British North America Act. The ruling made them eligible for appointment to the Canadian Senate. 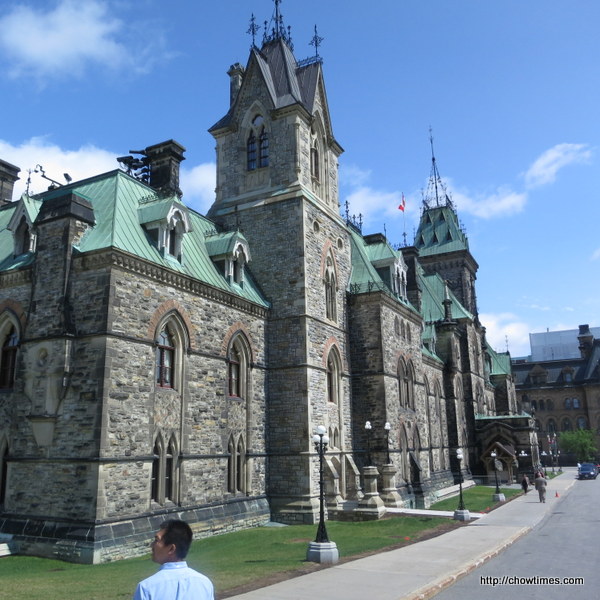 The East Block is built in the Victorian High Gothic style, just as the Library of Parliament contains offices for parliamentarians and preserved pre-Confederation spaces. 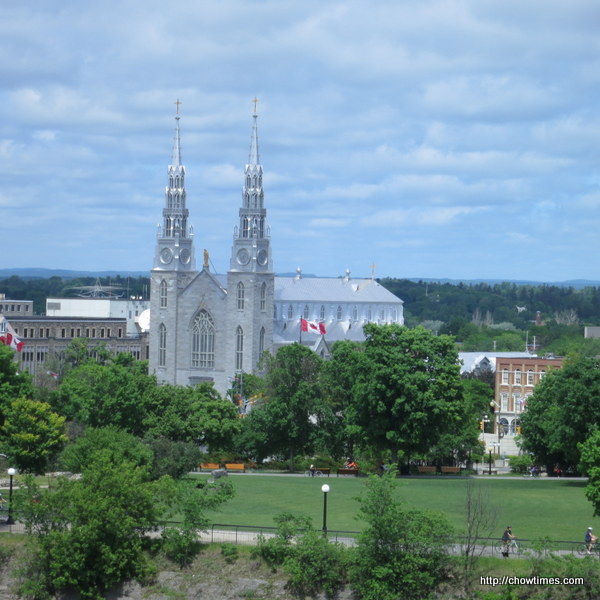 View of the Notre-Dame Cathedral Basilica from the sides of the Parliament buildings.

View of Alexandra Bridge over the Ottawa River from the side of the Parliament buildings.

We then explored other attractions in the vicinity area. The flag poles of all the provinces and territories in Canada in the order of the year they joined the Canadian Confederation.

The National War Memorial was unveiled in 1939 to commemorate Canadians participation in the First World War. It symbolizes the sacrifice of all Canadians who have served in the war in the cause of peace and freedom.

We were there just in time to witness the change of guard ceremony. After the ceremony, we continued our walk to the Rideau Canal.

The locks of the Rideau Canal.

We had a short walk along the Rideau Canal and then proceeded to the Confederation Park.

The totem pole, a gift from British Columbia to the Confederation Park.

National Aboriginal Veterans Monument in the Confederation Park pays tribute to the many Aboriginal men and women who have served in the Canadian Armed Forces. 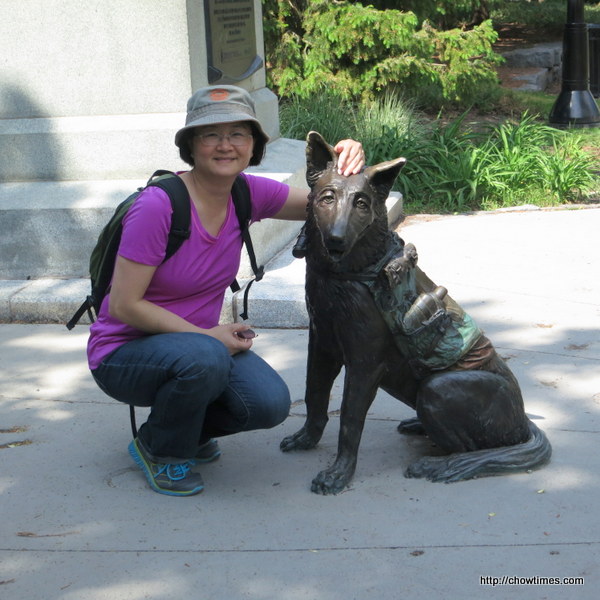 A bronze, life-sized statue of a medical service dog, wearing an authentic replica of a medical backpack that war dogs used during the First World War. The Animal in War Dedication was created in 2012.

Colonel by Fountain in Confederation Park.

After touring the Confederation Park, we returned to Parliament Hill for the visit of the Peace Tower and Memorial Chamber. We had tickets for a 4:00PM self guided tour which we collected from the visitor center upon arriving at the Parliament Hill.