I’m so behind my Community Kitchen posts due to the done time.

The South Arm Cooking Club for Seniors celebrated the Vasakhi in the month of April by making an Indian Feast. Vasakhi (or Vaisakhi) is an ancient harvest festival in Punjab. It also marks the beginning of a new solar year, and new harvest season.

Charlene prepared a menu of Indian feast which consist of Butter Chicken, Roti, Okra Sabzi and a Samosa style Potatoes and Peas side dish. It was a wonderful meal. 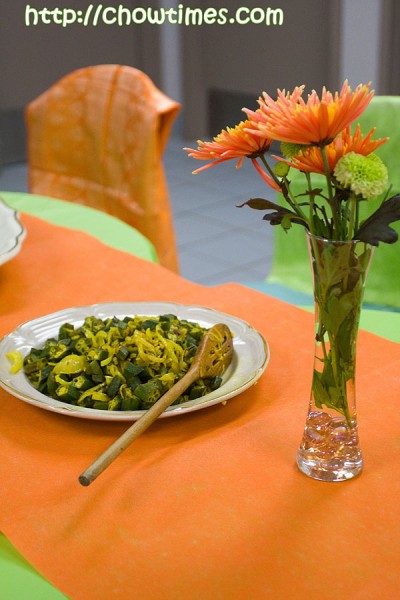 Stella decorated the dining table with the colours of the India flag. The setting adds festivities to the Vasakhi festival. Even the flowers are of the same colour, how thoughtful. 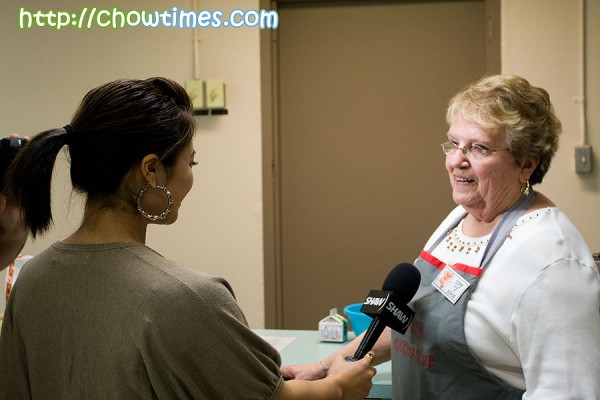 The South Arm Cooking Club for seniors also had another thing to celebrate on that day.  They had a few minutes of fame on TV as the senior’s kitchen was filmed and interviewed by the Shaw crews.  The seniors kitchen was featured on the Shaw program ”Express’ on the weekend of May 1.  Unfortunately, I could not get a copy of the program to show it here.

This recipe is adapted from Allrecipes.com and Tahera Rawji and it serves 6.

Here is an excerpt from ‘The Spice of Life’ on cumin shared by Stella:

Cumin is the seed of a small plant related to parsley but found in hot climates, especially North Africa, India and the Americas.  The seeds are boat-shaped and resemble caraway seeds, but are lighter in colour and have tiny bristles.  They should be roasted before being ground, but can then be used to spice up a whole range of dishes including curries, stews and rills.  Cumin is very commonly used in Mexican, Spanish, Indian or Middle Eastern cooking.  A word of warning, however, go easy on cumin as half a teaspoon is ample for a family of four.

Cumin has long been believed to help people suffering from disorders of the digestive tract including heartburn, nausea and diarrhea, probably due to its stimulating the production of pancreatic enzymes.  Cumin is also believed to have important anti-cancer properties, due to its ability to neutralize cancer-causing “free-radicals” and by enhancing the liver’s detoxification enzymes.

END_OF_DOCUMENT_TOKEN_TO_BE_REPLACED

While the meatballs are in the oven, Sydney is busy preparing the vegetables for the Italian Wedding Soup. The term ‘wedding soup’ is originated from the Italian language, minestra maritata which literally means ‘married soup’. It is referred to the green vegetables and meats which go well together.

Joyce was jokingly saying that it’s great to work with Sydney again on this recipe as both of them were working on the Pavlova Roll with Passionfruit Cream with great success at the previous cooking meet. However, she continued to say that she does not need another wedding as she enjoys her single and free life now. 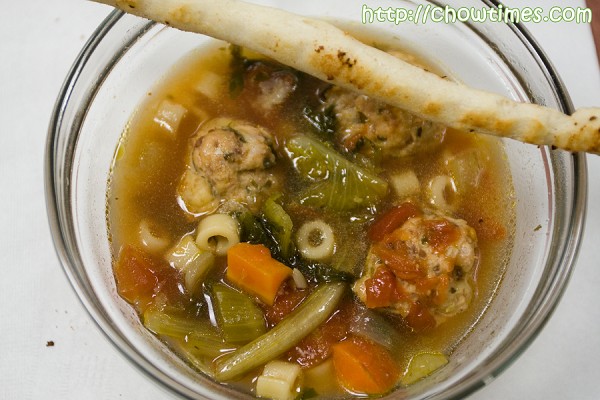 The Italian Wedding Soup is very flavourful and is rich with lots of vegetables, especially the escarole which has a very mild hint of bitterness in it. With the addition of pasta in this soup, it is very filling too and can be a meal by itself. It is also great to serve the soup with some bread sticks which I will blog later. 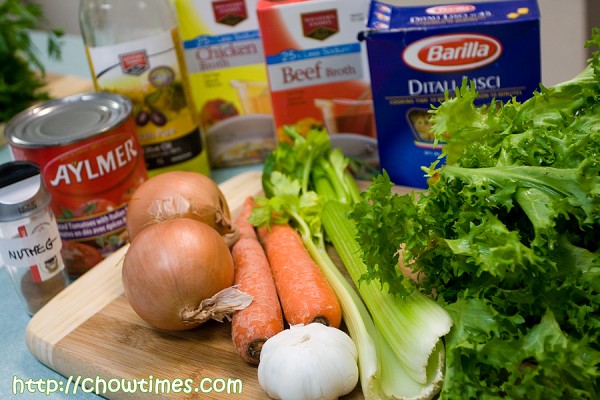 END_OF_DOCUMENT_TOKEN_TO_BE_REPLACED

Back in the South Arm Cooking Club for seniors, Charlene prepared three recipes for the seniors to cook. The usual menu will consists of a main dish, a side dish and a dessert. For the main dish, the seniors will be making Italian Wedding Soup. There are two parts to this soup; the first part is to make the Italian meatballs and the last part is to make the soup which the meatballs will be part of the ingredients. Joyce, Karen and Sydney are the main participants for this recipe but others also help out in rolling the meatballs. 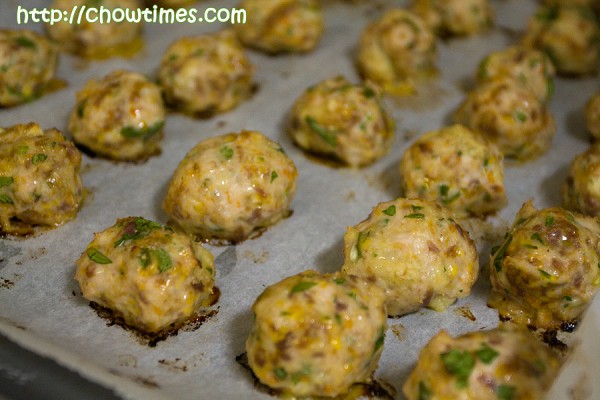 The Italian meatballs have a little spiciness in it. The are made with ground chicken meat and Italian sausage. The parsley adds freshness and fragrance to the meatballs.

This recipe is adapted from Ina Garten and it serves 6.

END_OF_DOCUMENT_TOKEN_TO_BE_REPLACED

This is the first time I met Rosa. She is a very cheerful lady with great passion in cooking. Coming from Las Vegas, Rosa told us that the chicken and beef here tastes different from those in the United States. She still goes to the Bellingham Costco to get her meat which is also cheaper there. Rosa told us when she first moved here where her family got to stay in a hotel for 2 months, she lost 20lbs as she cant do her cooking. Once they settled down in a house, she gain back her weight. This is how much she enjoys her own cooking.

Rosa made this Chicken Mole which is her family’s favourite dish. You may cook this dish in the mole sauce or cook the chicken and the mole sauce separately. This way, the sauce will last longer in the refrigerator, like a few days. Otherwise, you have to freeze the chicken with the sauce if you have left over. 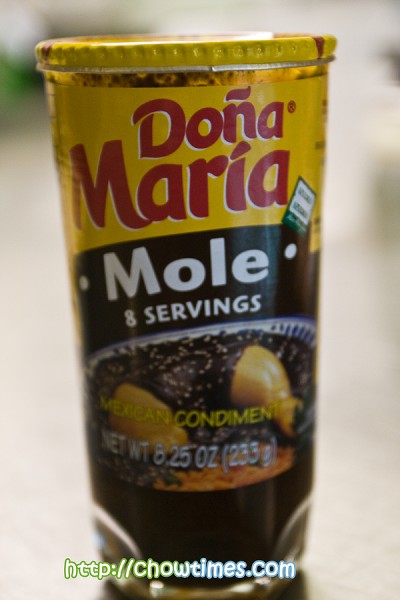 The most important ingredient for this Chicken Mole recipe is the Mole sauce. Mole is a Mexican condiments. It is made with cocoa, sesame seeds, chili pepper, peanut butter, sugar, spice, etc. Rosa told us that you can get Mole from Safeway. There are different flavours of Mole, like Adobo, etc but according to Rosa, the original Mole is the best.

END_OF_DOCUMENT_TOKEN_TO_BE_REPLACED

Sydney is new to the South Arm Cooking Club for seniors, at least to me. He volunteered to cook fried rice for the group. He did a pretty neat job and did some wok tossing which amazed us.

The Chicken Fried Rice looks and tastes pretty good. I’m sure Arkensen and Nanzaro will love this. The chicken can be substituted with other meat like BBQ pork or shrimp.

END_OF_DOCUMENT_TOKEN_TO_BE_REPLACED

It’s Mona and my turn to demonstrate in the South Arm Community Kitchen. Mona made a German dish called Barley Chicken Stew for the main dish while I made Malaysian Fruit Rojak for dessert. I had blogged about the Fruit Rojak here.

The Fruit Rojak was accepted well even though it is a little too spicy for some of the members in the group despite I did not add Thai chili to the dish. The only problem is the confusion of the origin of the dish where I kept hearing people saying Thai or Indonesian when they mentioned about the rojak. 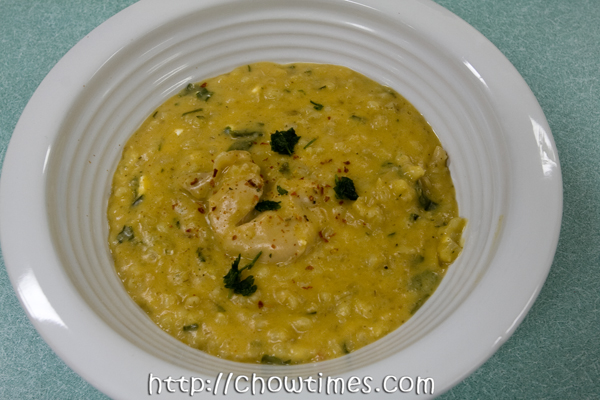 The Barley Chicken Stew is a very hearty meal and it’s very filing too. It’s a great dish for cold weather. 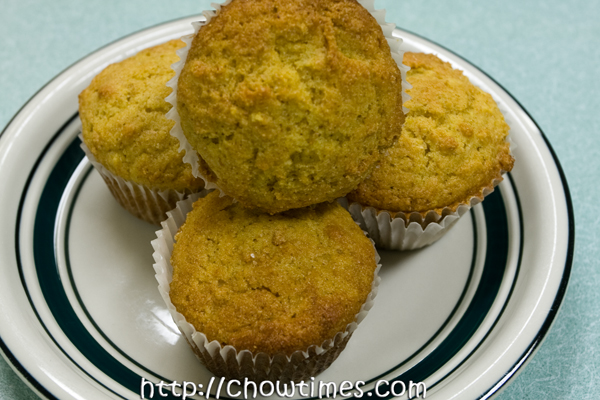 Another new member of the kitchen, Jane, brought some corn meal muffin to share with us. Jane was a school teacher for 25 years, teaching cooking in school. We hope she will share with us many of her culinary skills. 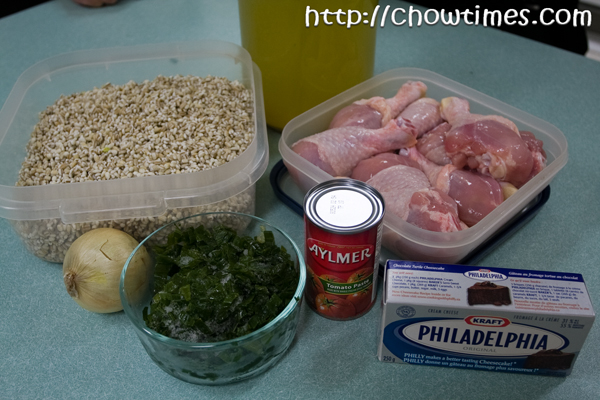 Mona made her own chicken broth with chicken bones and she added tumeric to the chicken broth for colour. Mona also bought organic pearl barley for about $5 per kilo from Galloway which is just 30% more expensive than regular ones. She also brought her own frozen chopped green onion and parsley which she planted in her garden during summer.

END_OF_DOCUMENT_TOKEN_TO_BE_REPLACED

The South Arm Community Kitchen for Seniors met again for another cooking session. This week, the seniors made three dishes, a chicken dish, a soup and a dessert. I love to watch the seniors at work. They are always working in teams and they worked in harmony. It is a great place where they get great company and make delicious food. They always have food to take home too. Some of the seniors are living by themselves and it’s very hard to cook for one or two people only.

The first dish is called Southern Apricot Chicken. This is such a simple dish that even a kid can make it. A great sweet and saucy chicken dish which is great with steam rice or noodle.

Minoo made a big platter of safflon flavoured basmati rice with wild rice to go with the Southern Apricot Chicken. 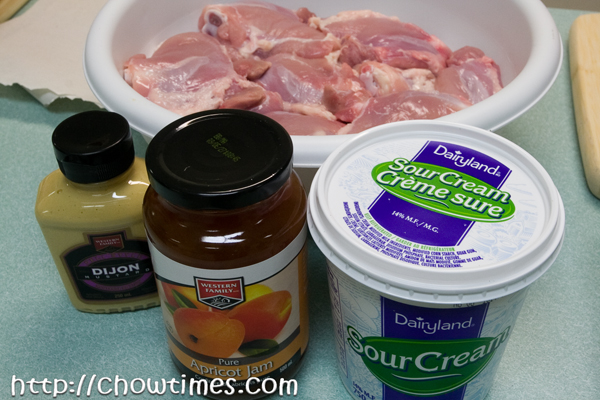 END_OF_DOCUMENT_TOKEN_TO_BE_REPLACED

Peggy made Bamboo Fungus Chicken Rolls in Vermicelli Soup in the South Arm Community Kitchen. This is the first time Peggy demonstrated in the kitchen and she introduced us to a new ingredient which is the Bamboo Fungus.

Bamboo Fungus or Bamboo Pith is a fungus which grows among bamboo forests. It is called Zhu Sheng in Chinese and is commonly used in vegetarian dishes.

Those on the left in darker color are wild bamboo fungus which Peggy brought from Taiwan. The wild bamboo fungus has more intense flavour and smell. The lighter ones on the right are commonly found in Chinese groceries stores which sell dried seafood and other dried groceries. Those had been trimmed. Only the stem part is used in this recipe.

END_OF_DOCUMENT_TOKEN_TO_BE_REPLACED

The Chicken Paprika is a very saucy dish and will be great with steamed rice. It’s not spicy despite it’s made with lots of paprika.