Chef Ian Lai from the Terra Nova Schoolyard Society demonstrated a simple Braise Lamb Shanks with Aromatic Vegetables and Mixed Grains in the Eating Together cooking class organised by the Touchstone Family Association in the celebration of Family Day in Richmond in the month of February. Ian’s philosophy on eating together is to introduce simple recipes with a few ingredients to encourage cooking at home.

Ian shared some lights on grains during the cooking class. We should eat more grains and stay away from refine food and processed food. Ian has shared about grains in a basic food skill workshop which I had attended.  Here is more information about grains which Ian shared during the cooking class. I’m passing along the tips I learned here so that more can benefit from it.

Bulgur is a form of whole wheat that has been cleaned, steamed or parboiled, dried, and then ground into grains of several distinct sizes. Bulgur may be made from any variety of wheat, but durum is the most common.

Although the term bulgur is often used to mean cracked wheat, the two products differ in one important way; bulgur is precooked and hence requires only minimal preparation before eating. Unlike cracked wheat bulgur is ready to eat after just ten minutes of boiling.

Bulgur has a delicious, mildly nutty flavour. It is a good source of protein, iron, magnesium, and B vitamins. It is packed with fiber i.e. one cup (182 grams) serving of cooked bulgur has 8 grams of fiber and contains very little fat.

Couscous is a coarsely ground semolina pasta that is a dietary staple in North African countries. It is also widely used in Middle Eastern countries and has become popular in American dishes. It is made of semolina, flour, salt, and water. Similar to rice in shape, color, and texture, it is used in many dishes as rice would be.

Couscous is available in a pre-steamed version in many grocery stores. To prepare this type of dried couscous, pour boiling water or broth over the pasta and then seal the bowl with plastic wrap. After a few minutes, the grain swells and can be fluffed with a fork. When correctly prepared, it has tender, moist taste and a light, fluffy texture. It is faster to prepare thena most types of rice.

Buckwheat is a plant cultivated for its triangular grains. Unlike most other grains, it’s not a grass but a plant crop. That means it has broad, spreading leaves; it also has lacy white flowers. Buckwheat cultivation is on the decline in the United States, where other grains have supplanted it in popularity. The grain continues to be produced in a number of countries including japan and Canada.

Most commonly sold as a dark flour, buckwheat gets its color from husks that are left behind during the milling process. this grain is usually included in a variety of types of flour mixes, like pancake and waffle mix. Plain buckwheat, perhaps for baking bread, is also available. Buckwheat is also sold in whole or cracked from for use in breakfast cereals or to add texture to breads and other baked products. It has a distinctive nutty flavor that can be quite pleasing to the palate, especially when contrasted with other, more mild flours.

Though not technically a grain, quinoa can substitute for nearly any grain in cooking. Actually the seed of a leafy plant, quinoa’s relatives include spinach, beets and Swiss chard. Due to its delicate taste and rich amounts of protein, iron, potassium and other vitamins and minerals, it is quite popular. It is also a good source of dietary fiber and is easily digested.

A quinoa grain is flat and has a pointed oval shape. The grains exist in several colorations, including yellow, red, brown and black. When cooked, quinoa expands to about three or four times its size. It also has a unique texture; the grain itself is smooth and creamy, but the tail of the grain has a crunchy texture.

Barley’s been feeding humans for millennia, though it fell out of favor during the last one as people came to see it as low-brow peasant fare. It’s most often used in soups and stews, where it serves as both a puffy grain and a thickener, but it also makes a nice side dish or salad. At most markets, you”ll have to choose between two types of barley. Hulled barley is the most nutritious, since only the tough outer hulls are polished off. Pearl barley is polished some more, so that the outer bran layer is also scrubbed off. It’s less nutritious, but more popular since it’s not as chewy as hulled barley and it cooks faster.

Grains are versatile, nutritious, high in fiber and inexpensive. They can be added to meatballs or meatloaf to keep it moist. Cooked grains can be kept in the refrigerator for up to a week. Cook various grains individually as they need different cooking times. Do not wash the grains unless it’s stated on the package (like quinoa) as washing the grains will wash away the nutrients on the surface. Grains can be mix into salad, soup, wrap up with a tortilla, as breakfast cereal or make into a dessert by adding coconut milk and fruit.

This Braise Lamb Shanks with Aromatic Vegetables and Mixed Grains is another simple and hearty recipe. You can make a big batch and freeze the leftovers in single portion size since this recipe requires long simmering time. 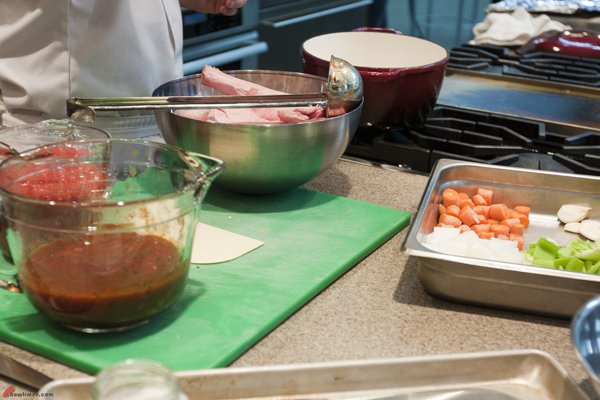 P/S: you may substitute the lamb shank with oxtail or stewing meat. You may also add in some garam masala for an Indian flavour lamb shank.

END_OF_DOCUMENT_TOKEN_TO_BE_REPLACED

Ben requested me to make a dish from Vij’s which he enjoyed a lot. It is the Marinated Lamb Popsicles with Fenugreek Cream Curry. It’s easy to source the recipe as a search for it returned many links to the recipe. I got this recipe from http://cookingresources.suite101.com.

The first thing Ben commented was that it did not look like popsicle. Well, I did not trim off the meat from the bones as they are nice for chewing. Anyway, none of my boys like it because they dont like meat with bones and they do not like the sourish cream curry.

I also had problem finding the lamb rack. It took me 3 hours to look for the lamb rack after visiting 7 stores. The 1.8 lbs of lamb rack costs $22. I halve the recipe as it’s way too much for my family of 4. Even that, I find that the recipe for the cream curry is way too much as there is a lot of left over. Half of the recipe will be more than enough.

This recipe yields 30 medium size popsicles for 6 people. The number of popsicles per person depends on the size of the rack of lamb. For larger popsicles, four per person is usually enough.

Marinate for the lamb chop:

END_OF_DOCUMENT_TOKEN_TO_BE_REPLACED

This recipe is taken from the recipe posted on Simply Recipes.

Here is the Roast Leg of Lamb recipe which we bought a couple of weeks prior in Washington. The Leg of Lamb was huge, was about 5 lbs and it took me and my boys almost 5 days to finish it, that was when Ben was away on vacation. He only had two servings of it.

We had three meals with just the plain Roast Leg of Lamb with gravy and some steamed vegetable and rice and the last two meals with noodles and soup. The boys preferred to have the roast lamb in noodles and soup as I sliced the lamb very thin for them. They had hard times eating them in a steak form as they had trouble cutting them. 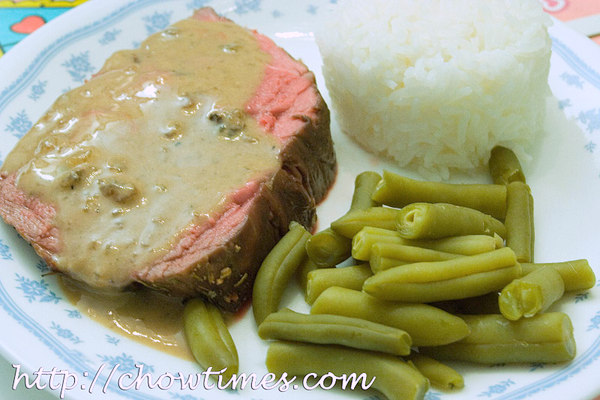 END_OF_DOCUMENT_TOKEN_TO_BE_REPLACED

Tanni is a another talented cook of the South Arm Community Kitchen. This week, she prepared a set menu (printed out nicely and put on display) for the cooking class. Her initial plan is to make a salad and garlic toast as the appetizers, Green Curry Lamb as the main entree and finally a sweet rice soup/congee as dessert. But unfortunately, with the boiling water advisory still on, she decided to drop off the salad as a safety precaution.

I’ll start off with the main entree. Green Curry Lamb. It was a great dish to be served with steam rice. The Green Curry Lamb is loaded with rich flavour from lemon grass, coconut milk and palm sugar. 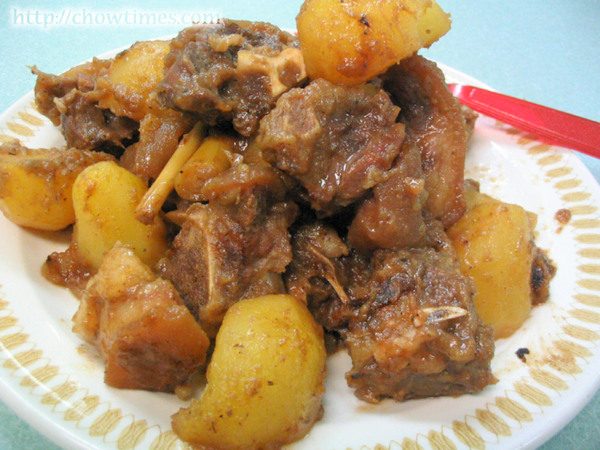