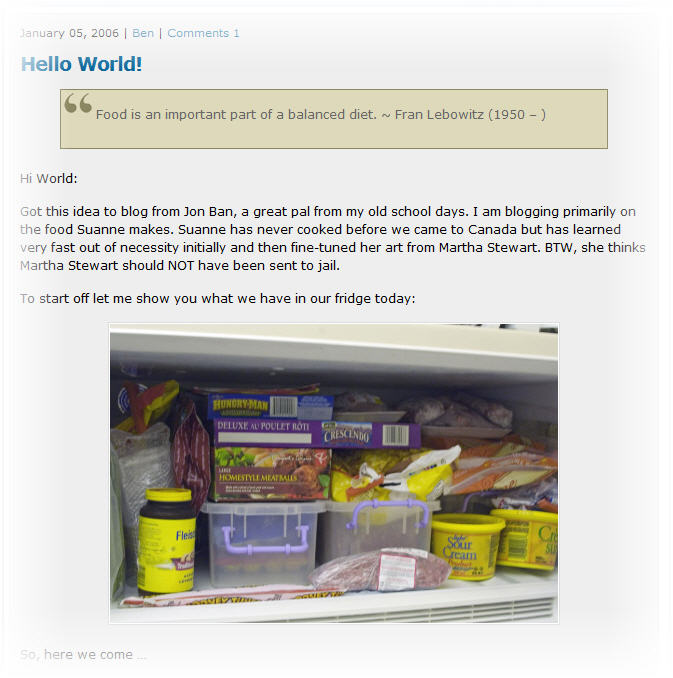 Suanne and I started blogging almost 5 years ago. It was our Hello World post above (link here) that started our accidental journey into the world of food. As I sit here, I am just amazed how food had played a big part in our lives.

When we landed in Canada, Suanne doesn’t know how to cook. She lived a privileged life where mummy and our maid does all the cooking. I remember the very first meal that Suanne cooked in Canada. Faced with unfamiliar stoves and different ingredients, she made her first family meal just after four days we were here. Yeah, the food was really terrible. I lied and told her it was OK. And she burst into tears! You see, I blinked when I said that.

Looking at her today, she is pretty good and knowledgeable with cooking and food. She even put together a cookbook called Diversely Delicious (link here) just a few months ago.

Trust me when I said I … END_OF_DOCUMENT_TOKEN_TO_BE_REPLACED

Hey guys … quick … pull up a chair and settle down.

These two words had been ringing in my brain the whole day long. Yeah, this came from the blog post yesterday when I blogged about The One Restaurant on Granville and 41st. In that post I mentioned that the Chinese name of that restaurant is called Nong and I further added that Nong means “thick” or “concentrated” as in sauce.

Well, next came a barrage of comments (at least it felt like a barrage) from Buddha Girl, HM and Teresa that it was the wrong word.

What do I know right? So I conferred with a Shanghainese friend of mine and he also gave me the same answer:

LOL! So I learned something new today. Both the words above are pronounced as Nong but with different meaning. It even looked the same to the illiterates.

The Nong on the left means “you”. Now, you might think that the word “you” is such a common word but actually this word is only used in … END_OF_DOCUMENT_TOKEN_TO_BE_REPLACED

Continue Reading Of Nong and Nong

About a month ago I introduce two of my very white colleagues at work the experience of eating Chinese Hot Pot at the Top Gun Hot Pot in Burnaby. In that post, I wrote about my curiosity why despite them being Canadians living in a cities (Vancouver and Toronto) with a lot of visible Asians, that they still have very little experience in enjoying authentic Asian food.

Below is a comment that a reader of Chowtimes wrote in response to my question. Dyn’s comments has to be the mother of all comments for length (Thanks Dyn!). I thought it deserved to be elevated to a post on it’s own and perhaps some of you could also chip in with your two cents on this. Here is Dyn’s comments in its entirety:

I myself love every Asian cuisine I’ve tried (Japanese, Cantonese, Szechuan, Vietnamese, Korean, Shanghai, Punjabi, Pakistani, Lebanese, Syrian, South Indian…) – East and West Asian, that is. However, to answer your questions based on my own experiences and those of friends (and those I’ve tried to convince to try book-tripe!):

First, reasons why people are unnerved:

1. Media scaremongering.
There’s the recall freak-outs all the time, plus every bad comedy involving Asia inevitably has the Asian character eating something uncommon or gross to the western palette.

2. Unfamiliarity.
Organ meats are classically foods of the poor, and since most Westerners have had the privilege of being relatively wealthy (and developing cheap, processed food early on), those foods are not appealing to the young. On a related note, those of us who are the children of the baby-boomers or the grandchildren or children of those who lived through the Great Depression had to hear, growing up, terror stories about organ meats and a number of other things, so that adds to the issue. Also, alot of Northern European cuisine that came over with our ancestors was very, very bland, so to many the pungent smells of Asian cuisine are as offputting to Westerners (at first) as the smell of cooking pork is to alot of Asians (I seem to recall reading that there’s a word in some Chinese dialects for the smell of boiled pork?)

3. Looking Silly
Chopsticks are a bit of a learning curve, and people worry about making a fool of themselves, especially when thinking of…

4. Price
it’s not immediately evident to alot of Westerners that that $20 they see is for a family to share the dish, as Western restaurants (beyond some Amish ones in the Eastern US) are not communal in nature. Most Westerners do not realize that 3 dishes for a family of 4 with rice comes to an economical $10-15 per person most of the time, and possibly much less. Those who do know this will tend to want to go in groups and might not want to look silly per #3.

And now the issues that are not so much the people’s fault:

5. Translations
It can be a bit frightening to have a poorly-translated or badly translated menu, especially for would-be new folks. To their credit, most Asian restaurants do indeed endeavor to provide a translation for at least some of the dishes (see #7), but half the time they seem to be using a dictionary from the 1800s. An example of this would be, let’s say, “Yue Choy with Doufu and Fish Maw In Soup.” Let’s say this is a plausible dish. Some might get “Doufu” is “tofu”, but very few will know “yue choy” (which could easily and correctly be called “mild mustard greens” or “Chinese broccoli”) and even fewer will know what a maw is, and for those that do? Maw gives a very poor idea of what the cut/type of fish actually involved is. Similarly bad are one-off’s like “in sauce” or “in spicy soup with noodle” – what sauce? You have more than one, surely? Which soup base? Enough experiences like this can put someone off, especially if the menu doesn’t try and be descriptive. Worst-case, they’ll order a “safe” western dish, which may very well be poorly cooked and leave a bad taste in their mouths, so to speak – a local Westernized Chinese food place near me has lovely authentic Chinese food available (with names like above!), Westernized Chinese food, and hamburgers – anyone foolish enough to order their hamburgers will never return!

6. Hygiene
This comes down to two issues: first of all, the cleanliness. Asian restaurants seem to have a … END_OF_DOCUMENT_TOKEN_TO_BE_REPLACED

Continue Reading Why Do Whites Accept Japanese and Thai Cuisine More Than Other Asian Cuisine?

We might as well just post about Frappe Bliss since it was while we were in the Aberdeen Center we first learned that chowtimes.com had been suspended. 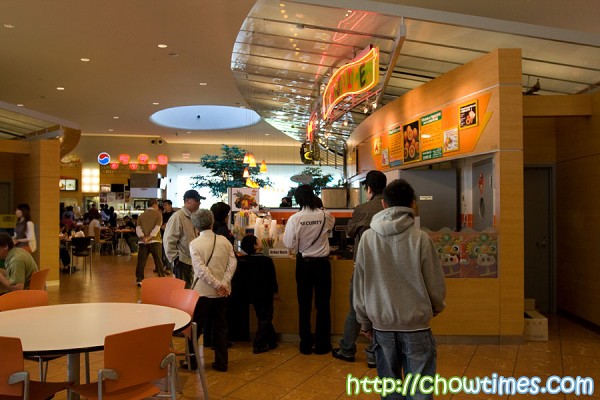 Food courts in shopping malls all around Metro Vancouver is so boring.  They all look alike with the same stalls selling the same stuff.  I find that all food courts are dominated by the same group of restaurants.

I find Aberdeen’s food court is different and a class above all other food courts around.  The layout is very pleasing and they have lots of tables.  It is bright and for an Asian food court, it is clean and well maintained.  The best thing about this place is the selection of food and it is well represented by some of the bigger names in Asian restaurants like Jang Mo Jib and Cafe D’lite just to name a couple.

Having gone through the long cold winter, do you find that it’s kind of overly warm and hot this spring?  We do.  We wanted to just get out of the house and go out and look for a nice icy cold drink to cool down.  Usually we’ll just go to Timmy Ho’s for an Iced Cap but it is just too heavy for us.

The ideal would be an “ice plate” like the ones we had in Well Tea.  We thought the best place to look for one is in Aberdeen since we also wanted to go grab some small plates and place mats from Daiso.  The closest we got to an Ice Plate was Frappe Bliss.

You have a choice … make your own ($2.36 Frappe with 71 cents per topping) or get one of their nine concoctions.  We had the one called the Peanuts Iceberg which is $3.80. 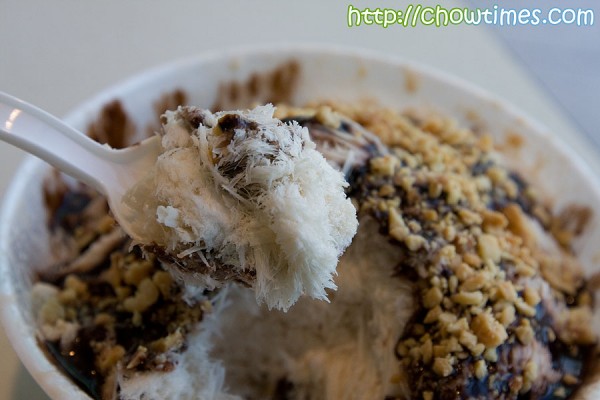 Was it good?  It was awful … pretty tasteless.  It was also very light — I say it was very airy and had hardly anything in it.  I find it intriguing how they managed to make it so fine and that it did not melt much at all despite that.   Yucks.

Aberdeen’s Food Court has Wifi.  I must add that it was painfully slow.  It actually felt like those days when we had the 9600 baud rate modems!  We got connected and found chowtimes.com suspended.

If you want to read more about our saga … click below:

END_OF_DOCUMENT_TOKEN_TO_BE_REPLACED

Oh wow. A true story based on a blog ... and a FOOD blog at that too. This, Suanne and I got to watch! [youtube http://www.youtube.com/watch?v=DXklTRsLui4&hl=en&fs=1] This is going to…

Hi All: I just want to point out a little change we had made on Chowtimes. Some of you would have used what we call the Sidebar Tabs. I want…

Continue Reading The Sidebar Tabs and Free Stuff on Chowtimes.com

I am a happy camper now. It took a long time ... but ... I figured out quite a lot of bugs on chowtimes.com that was making the loading time…

We received an email from a chowtimes reader (Eric) who asked us if there is a better way to look for restaurants on the site. In particular, Eric was asking if he could look for, say, all Chinese restaurants in Burnaby. Yes, you can … to a great extend.

I can understand Eric’s needs. Chowtimes had grown over the years with a large throve of information. Getting to what you want is not always easy.

We always had on the sidebar a listing of categories by cuisine. Over the many years, we had amassed quite a lot of restaurant reviews (almost 400 now). Some of the categories were too large. We wished we had the time to go back and revamp the categories but that would involve way too much work. The above is hierarchical view by categories.

But what I wanted to point out to you is our Tag Cloud.

END_OF_DOCUMENT_TOKEN_TO_BE_REPLACED

This post is only meant for bloggers, and aimed particularly to those who uses the WP-Vybe theme on their site.

By default, WP-Vybe implements the search capability from WordPress. It looks like this: