Update 31-Aug-2009: Please note that this offer has lapsed and no longer available at Ebisu.

Read on because there is a summer treat for you … courtesy of Ebisu on Robson and Chowtimes.com.  It is going to be quite a treat, so you may want to pay a little bit more attention to this post!  🙂 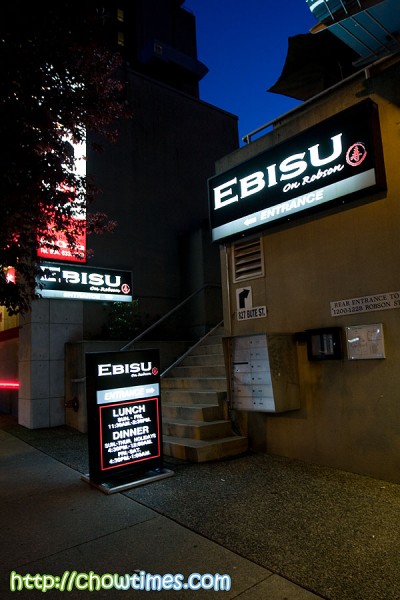 Suanne and I dined at Ebisu about a month ago.  We had a great time and we blogged about it here.

A couple of Thursdays ago, Ebisu on Robson launched their new menu with the introduction of a few pretty interesting and new dishes.  At the same time, they had also prepared the Spring/Summer specials.

Suanne and I were back at Ebisu to sample the new items on the day of the launch.  More importantly, we were there to work on a three-way-win plan.  Ebisu gets to introduce their new menu on chowtimes … and at the same time Chowtimes gets to inject some fun (and value) to our readers.  Most important of all, chowtimes readers gets a free dessert. 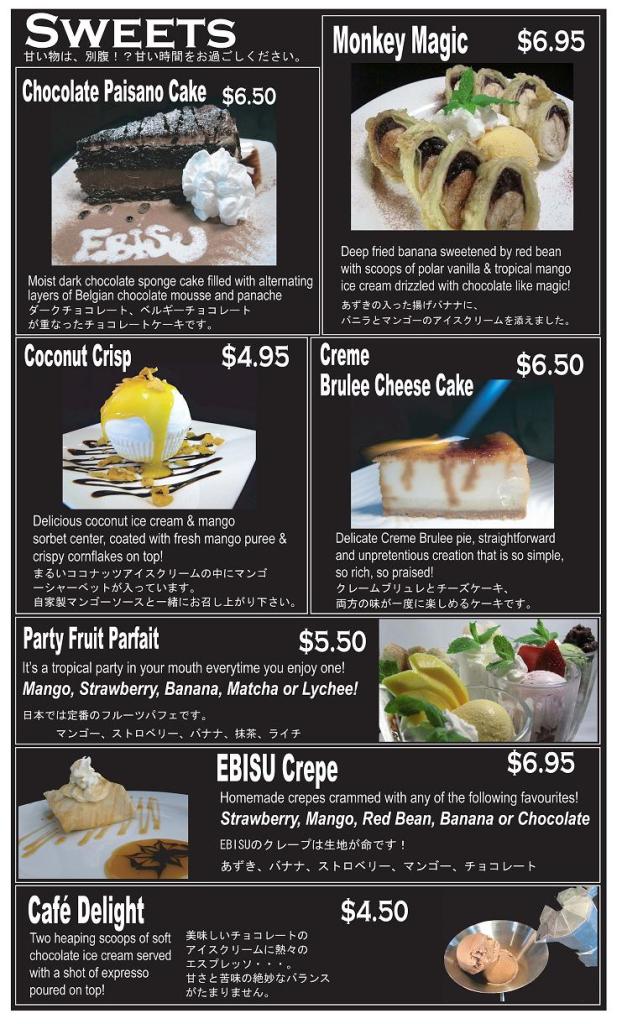 You may get any of these items above as a treat from Ebisu and Chowtimes.  Oh, wanted to be clear that this is available only in Ebisu on Robson and Ebisu on Broadway.  I’ll share with you the details further down this post because I wanted to show you what Suanne and I became a “guinea pig” for you Vancouverites.  He he he …. 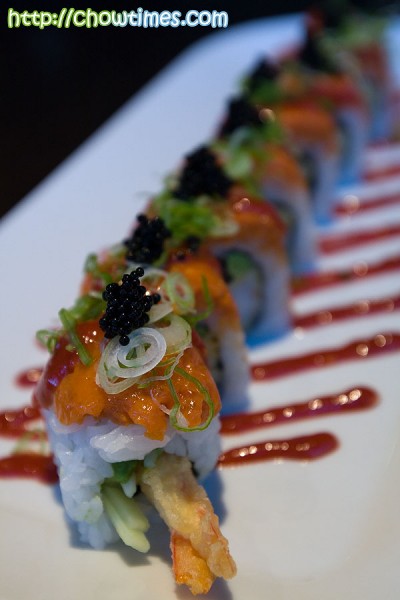 Deon, Ebisu on Robsons General Manager, hosted us.  We started off one of their new sushi rolls.  The one we tried was the Ninja Kicker (above).  This roll is targeted for those sushi lovers who craves for a little bit more spiciness in their roll (hence the name).

Suanne and I loves this roll a lot.  It is certainly a departure from the normal sushi rolls and is perfect in many ways.  If you like a kick to your rolls, I am quite certain you will love this.

Suanne and I learned a lot from Deon.  It was interesting how they developed their new menu.  The Ninja Kicker has all the elements of a good creation.  It is pleasing to the eye with a good balance of colors.  It has a combination of contrasting texture. The prawn tempura adds crunch to the texture.

This one has an element of surprise in the taste department. 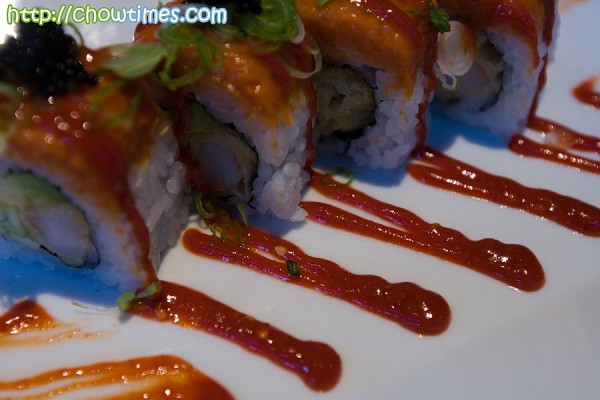 The secret to the Ninja Kicker is the sauce.  All Deon would say is that they started this from a base … the humble Thai-style Sriricha hot sauce.  The sauce is darker than Sriricha sauce, that much I know.  It has a level of sweetness and with a strong flavour.  The spiciness leaves a lingering heat in the mouth. 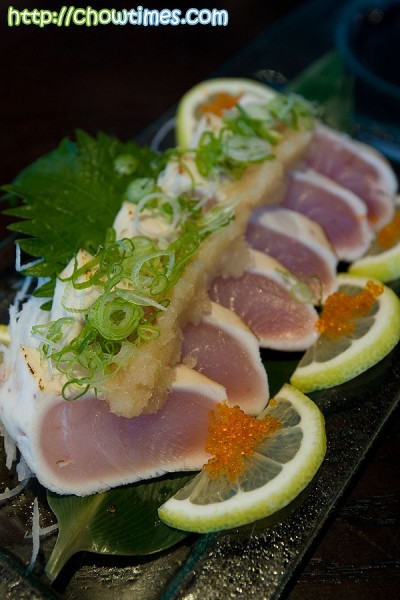 Tuna Tataki is one of the more popular Japanese dishes.  On the surface this looks kind of normal … END_OF_DOCUMENT_TOKEN_TO_BE_REPLACED

Suanne and I met up with Kenneth for dinner. It had been a while since we last met but over the years I had been in touch with him over Facebook. Kenneth is an avid photog and I got my interest in photography from him. The reason I am using Canon (and not Nikon) is because of him.

Kenneth had been to Barcelona a few years ago and after all these years, I still remembered the stunning pictures he took from his trip. Since Suanne and I will be vacationing in Spain this summer, I wanted to meet up and learn more about Spain. Also, I had just gotten a brand new lens and wanted to learn from the master himself since he had a similar model. 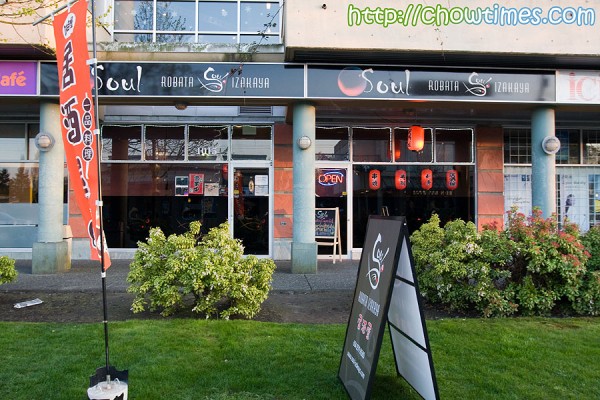 Kenneth and his wife shares a lot in common with us. They travel a lot and makes a trip to Japan at least once a year. They are going again this year and planning to dine at a Michelin 3-star restaurant (expensive!).

So with all the badgering (LOL!) I had from chowtimes reader about my constant trips to cheap sushi joints, I decided to meet up at a Izakaya. Moreover with Kenneth’s experience with Japanese food, I won’t go wrong. This is like killing THREE birds with one stone … lens, Barcelona and Izakaya. Perfect. 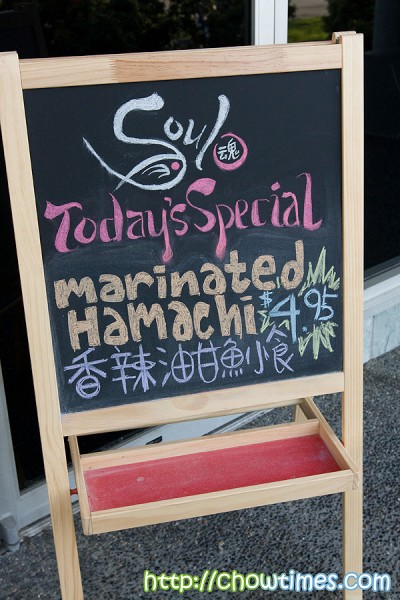 The Soul Robata and Izakaya restaurant must be new. I had never noticed this place before. Had I not eaten at the new Cattle Cafe (located just next door), I would not have known.

Somehow, I think there is an explosion of Izakaya restaurants in Metro Vancouver. Do you reckon? It is like a in thing these days to dine at an Izakaya and do find that people are thumbing their noses (snobs! LOL!) to cheap sushi joints.

Soul has daily specials from Mondays to Thursdays. I can’t recall which day but one of the days’ special is 50 cents oysters. I gotta check that out one of these days. 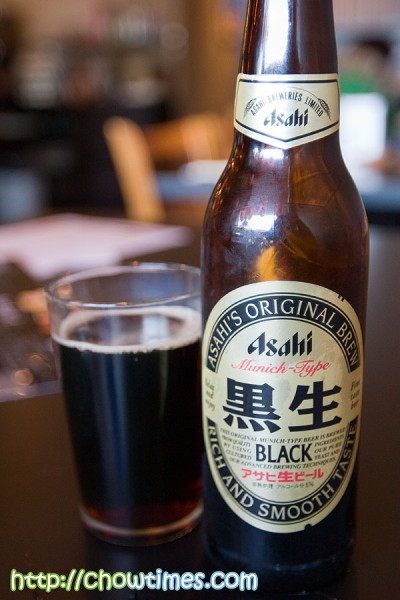 Kenneth came late and without Christina — baby problems apparently. While waiting we ordered a Japanese beer — Sapporo Premium. This is $8.50 for a large bottle. It is light bodied and had a mild bitterness. Not big alcohol drinkers ourselves, this is perfect at 5% alcohol content … even Suanne thinks it is good.

Soul has an extensive Sake menu. Ooooo … expensive! Some of them costs something like $150. I stayed away from that … my taste is not THAT refined. 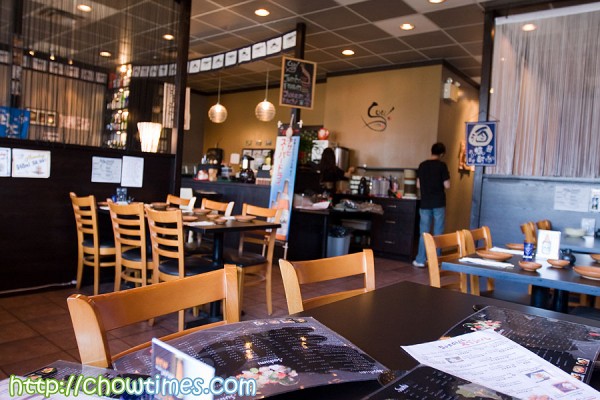 Service was excellent. The wait staff who waited on us was very helpful and genuine and tolerated all my dumb questions. These are some of the things that makes it a great start to a meal.

You know, I think Soul is a Chinese owned restaurant because I thought I heard them speaking in Cantonese. That and the fact that they did not yell as loudly as in the authentic Japanese Izakaya joints. 🙂 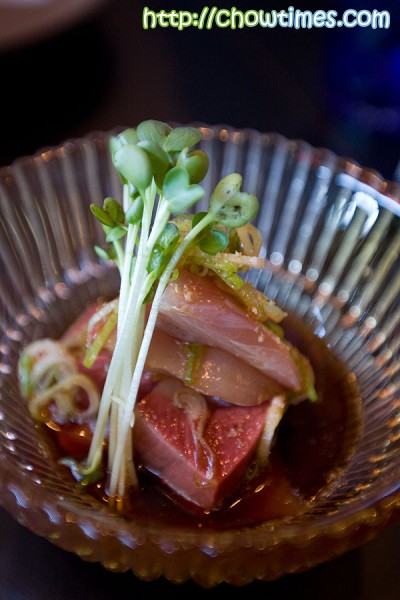 We had to get their special of the day. It is simply called the Marinated Hamachi which costs $4.95 on Saturdays. On other days, this is $9. Taste wise, there is a hint of sharp spiciness and served with “Soul Special Sauce” … not sure what that sauce is. It is really a small serving with only 4 pieces of Hamachis. Delicious. 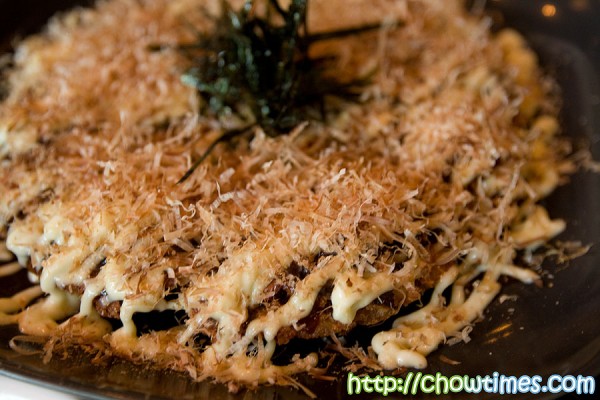 They call their Okonomiyaki the Homemade Japanese Pizza with Seafood. I would call it a pancake more than it is a pizza. The size of this is like a medium pizza with 6 slices. We like the base which is crunchy and crispy. According to Kenneth who had been many times to the home of the Okonomiyaki (Osaka), he finds the quality of this quite close to those he had in Osaka. This is $11.

END_OF_DOCUMENT_TOKEN_TO_BE_REPLACED

Suanne and I decided to start eating up. Let’s see … over the past three years of food blogging, we had blogged a total of 19 Japanese dine outs. Most of it was AYCEs (all-you-can-eat), ramen, bento boxes and sushi platters. The most gourmet places was Daimasu which I had every other comment lambasting me for even saying that it was great. Oh yeah, we also went to Tenhaci and I also got lambasted for saying that I hit the can several times after the meal. LOL!

So, here you go … Izakaya. Oooooo … Suanne and Ben’s is eating up. Ooooo … gourmet Japanese! 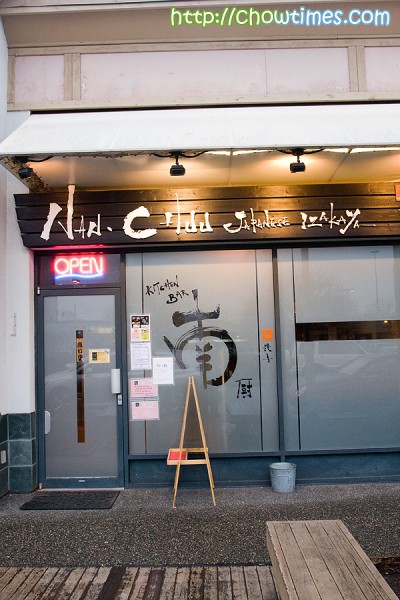 We initially wanted to go to Manzo Izakaya but found that it was closed on Monday. Looking across the street on Alexandra, there is Seto which I heard rave reviews of. But then I also heard of the review that says it costs $60 for a meal for two in Seto. That kind of rules Seto out.

It just so happen that there is another Izakaya just a few doors away. We peeked into the place and it looked OK and pretty authentic Japanese. 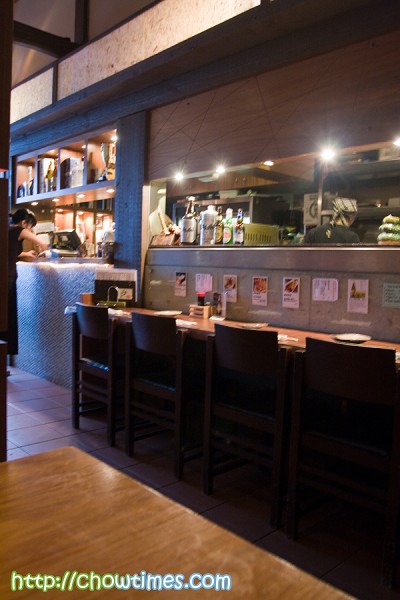 Nan Chuu is authentic alright. Everyone speaks Japanese here and when the wait staff came by to speak to us her accent is clearly Japanese.

You know what I like about this place. When we walked in, everyone (and I mean) everyone yelled something. I guess it was to greet us but we never quite know if it was meant for us.

The booth we were seated in was very narrow … and dark too if I may add. Also, Suanne observed that it was loud … loud music and all. I gather that this is quite common in an Izakaya … with the word Izakaya meaning a Sake Shop. 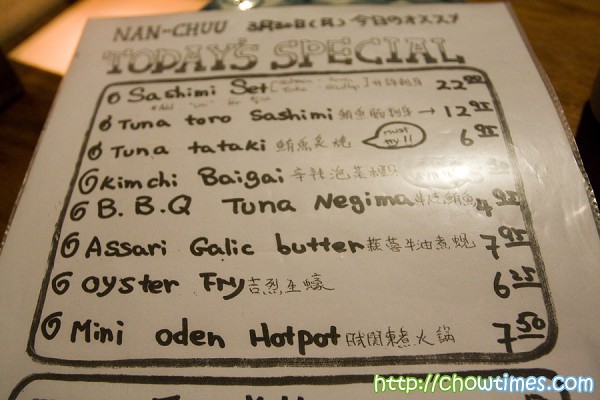 We were given two menus … a fancy wood cover menu and another hand drawn Today’s Special. The waitress was very helpful trying to explain what they have but it was all over our head. So, after mulling for a good few minutes we decided on three items.

We had absolutely no idea what we were ordering and told the waitress that. She smiled and said “yes” politely. I don’t think she got half of what we said. 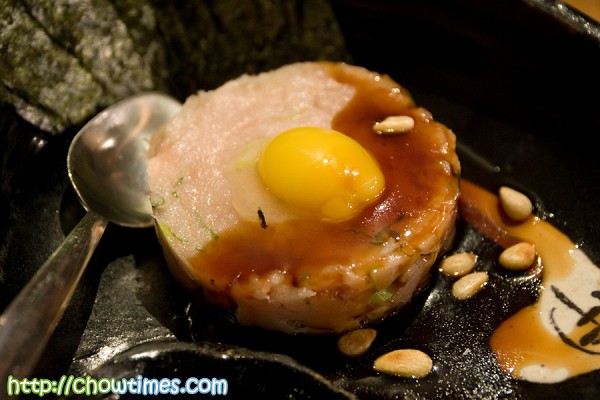 The first one was the Tuna Yukke with Seaweed under Nori Wrap. They had this as special for $5.50 before 7PM. Since they highly recommended this we said yes even though we had no idea what it looked like nor did we know what Yukke was.

When it was brought to our table, it was later explained to us that the sauce is Yukke.