Oh … this dinner happened about seven weeks ago, I would think. I had been putting off writing this because I had written about this restaurant before. My first visit to the Bejiang Restaurant was  back in August and I posted my experience here. Back then, this restaurant was relatively unknown. Both Suanne and I had a wonderful meal there and left feeling very impressed.

There were some discussions around this restaurant and some of us decided to do a chowdown to check out more food.

The Beijiang Restaurant is a Xinjiang style restaurant located on the eastern end of Richmond’s glutton street of Alexandra. It is tucked in the corner of the same strip mall where Cattle Cafe and Michigan Noodles is.

This restaurant is often packed especially for dinners. So a reservation is recommended or else the wait would be excruciating. I had been here several times and each time I see people waiting outside the door.

We had a reservation and so the table was all ready for us. You know, the previous times I was here I really loved the ambiance and the sense of class in this restaurant. Especially at night, when they draw the heavy curtains and the whole restaurant glows in yellow; it was fancy. This time, it was just a bustling restaurant. Gone were the fancy brass tea pots and fine china tea cups. I guess they had been so busy that breakages happen and replacing those were not easy. 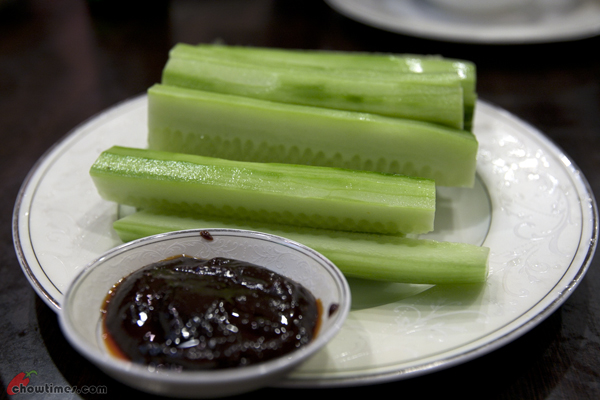 We started off with Savoury Cucumber ($4). Simple dish but I love this. The cool crunchy cucumber slices were served along with a salty bean sauce. A good dish to whet the appetite for the feast to come.

The Diced Chicken (Large $24) was that one dish I enjoyed so much the first time I was here. In Chinese this is called the “Big Basin Chicken”.

When I was here for the first time, they serve this in two acts. They would serve the chicken first and let you eat the chicken for a while. After a few minutes, they would then bring along another dish of noodles and pour them over the chicken.

This restaurant excites me and I think it will you too. After just 5 minutes in this restaurant, I was already telling Suanne that we NEED to come back because it is simply impossible to try everything we wanted to.

We did not find this restaurant. It was JS who first broke the news of this new restaurant on chowhound and the very first response to that initial report was from Vancouver’s uber foodie saying “Color me excited!”. That thread was a very interesting one … well, at least to me as it covered a branch of Chinese cuisine that is not very common in the city.

The Bei Jiang Restaurant is located on Richmond’s glutton street, Alexandra Road. It is in the same strip mall as very popular Cattle Cafe and Michigan Noodles.

Bei Jiang is a Xinjiang cuisine restaurant. Xinjiang is a province located in the western most part of China which for the most part quite unlike the rest of China. It is the Uyghur (pronounced like you-girl, I think) people who makes up half the population. The Uyghur is more Turkic than they are Chinese.

Parking in this strip mall is very bad. You are better off going very early, like 5PM or you are better off paying for street parking along Alexandra. I remember that this strip mall used to be one of the quieter ones along glutton street. Ever since Cattle Cafe, Michigan Noodles and a host of other popular restaurants opened, it had been impossible to get parking in the really small lot. Many do not know that there are more parking by driving to the roof of the building but that too is small too. 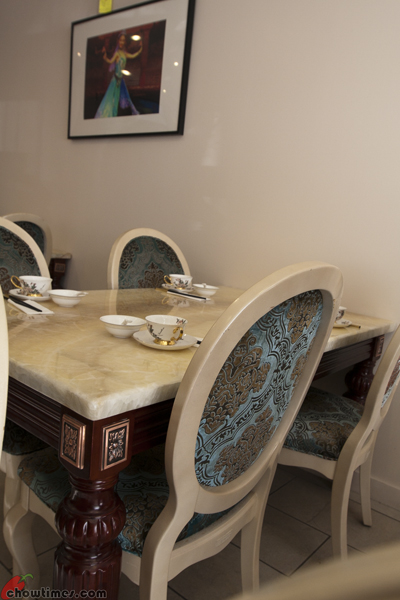 Walking in, the first thing that will grab you is the classiness … well, at least a good attempt to be classy. For the most part, this is a pleasant restaurant with some rough edges.

The marble top table with the stout table legs along with the silky seat cushions sets this place apart. I am guessing that the nice stout legs are there not only because of aesthetics but it is meant to support the heavy table top. I like the table top as it is cold to the touch.

It is kind of spotty in that they also have a couple really cheap looking tables too.

And how is this for a table setting in a Chinese restaurant. For one, the chopsticks have more gold on it. And then the tea cup has gold trimmings too.  Like I said, it is spotty … in that not every table has the same table setting. Some have more ordinary looking tea cups.

OK, this comment is gonna make some of you squeamish. This is a traditional Chinese restaurant. They … errrr … don’t provide communal chopsticks if you don’t ask them. As a family we don’t need that and I see that all the other tables don’t use communal chopsticks too. He he he … some of you must think that the Chinese people are really unhygienic.

I just found out that Suanne cannot lift her pinky easily. Too her a lot of straining to get to this position.

Oh … to add … the restaurant was full during Thursday dinner time although there was no line. The customers seems to be largely young Mandarin speaking people and strangely we were the only family-group dining there on that day. 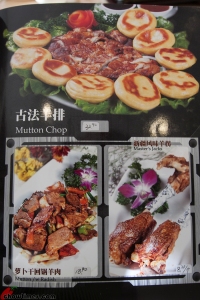 Remember I said earlier that I was already planning to make a return visit? Well … just look at only three pages of many of their menu … with so many enticing colourful pictures. The pictures above are clickable to show a larger image. It is one of the most appealing menu I had every seen.

Their menu is very lamb-y but then of course, Xinjiang cuisine is known for their excellent lamb dishes. It took us a while before we decided what we wanted. The waitress was not much of a help because she speaks Mandarin (she took a while to understand when we asked her for two glasses of water).

Another observation of their menu — their prices are high and they do charge a bit of a premium. Still I thought it was worth it because of its uniqueness.

For me, a lot of these dishes I have never try before.

Can someone help me translate this page here? I really, really want to try this but am not sure how many this feeds and whether if this is to go or dine in. We need a lot of people to devour this beast. So, am wondering if anyone would want to join me if I organize one? 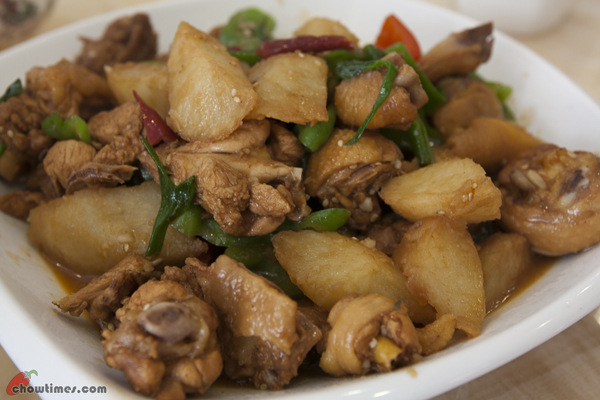 We ordered the above because we saw every table ordering this. It was very good.

This is called the ”Da Pan” (big basin?) Chicken. It came in three sizes:

We got the small one. It is served with potatoes, green and red sweet peppers and some red and green chilli peppers. So this is a spicy dish but not very spicy though.

This was what intrigued us the most and made us order it.

They serve this dish in two acts. First … END_OF_DOCUMENT_TOKEN_TO_BE_REPLACED