I had been to Chambar twice before with the last time during last year’s Dine Out Vancouver. However, this year, I decided to go there again because Suanne had never been there before and wanted to try their famous mussels.

Chambar is a Belgian restaurant located on Beatty St just outside that Stadium Skytrain station in Vancouver. Our reservation was for 5PM. By the time we arrived 5 minutes before, many had arrived earlier and waited at the lounge. We can see that Chambar is perhaps one of the most popular DOV venue.

We got seated in the inner dinner hall which I preferred because it is wider and had a big window (not that there is a view from it anyway). One thing you will notice about Chambar is that the walls are decorated with art pieces which they help local artists showcase their work.

Just a couple of tables away was a group three Asian diners who also whipped out cameras and took pictures of their food. For a moment, we were wondering if they are one of food bloggers we know. We tried to establish eye-contact but failed. I thought it will be great to say hi to bloggers.

Oh, we were also told that we had only 1.5 hours for DOV. We understand the reason why.

Since this is a Belgian restaurant, I chose a Belgian beer. They had a good selection Trappistes beer which is renowned to be “all one needs” and are known to be brewed in monasteries by monks. I got myself the Rochefort 8 which is 9.2% alcohol. Small bottle but packs quite a punch.

For the appetizer, we had the La Salad d’Hiver. This is a Belgium endive and watercress salad with cranberry and vanilla vinaigrette. Stacked up high and had fresh crunch but otherwise, it was pretty tasteless save for the vinaigrette. 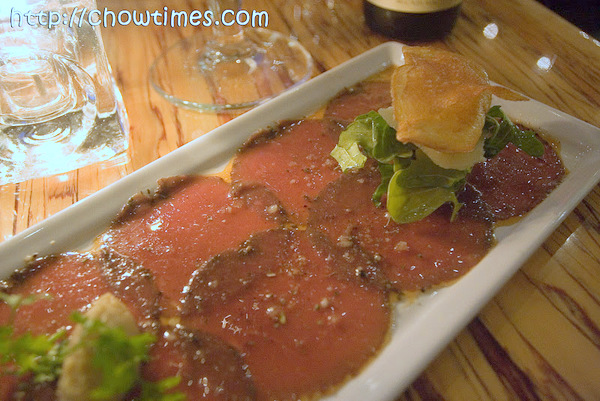 The next appetizer is one of the most interesting we ever had. It’s called the Carpaccio de Chevreuil. It is very thinly sliced (but also salty) venison and served together with crispy golden Yukon potatoes and roasted garlic and horseradish tapenade. Together they pack a good mixture of texture.

My main was the Truite et Ravioli. It is basically a trout and ravioli dish. The trout was crusted with absinthe butter while the pepper and goat cheese ravioli was roasted. It was quite bland. Frankly, this was not the star of the meal.

The star of the meal is none other than the Mussels Congolaise. It came in a big pot with a lid that you use to discard the shells.

The mussels were cooked with a tomato coconut cream, smoked chili and lime. We ordered a bread roll ($3!) as a side to dunk. It’s such a waste for good soup. Bread should be free especially with this.

And the mussels were simply the fattest, juiciest we had ever tried. I had mussels in Chez Leon in Brussels just last year and there is simply no comparison to good old Vancouver mussels.

Since I had been raving about the frites I had in Brussels, Suanne wanted to see what the fuss is even though we know this is really Vancouver fries. It was pretty much the same as any fries we had locally. This small cup is $5. 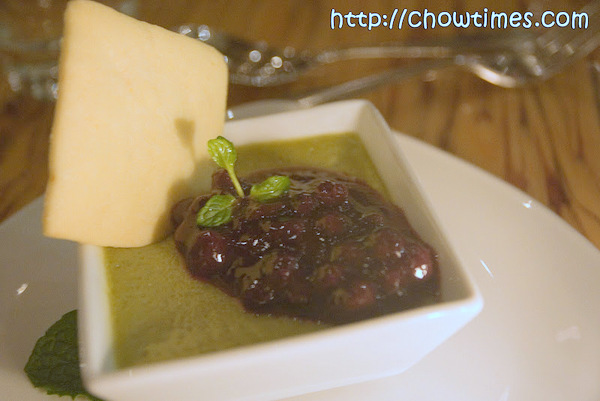 Pot de Creme is a green tea (Matcha) pot de creme and topped with lemon sable & blueberry compote. It was light and not overly sweet. 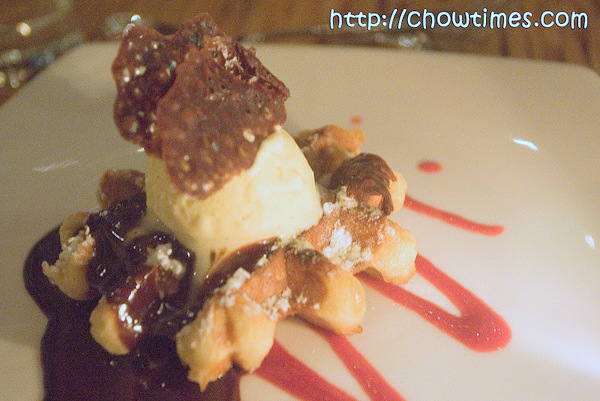 The Belgian Waffle was served warm and crispy and topped with homemade vanilla ice-cream and warm chocolate sauce.

In all, this is about the only DOV dinner that we came away absolutely full. There were a lot of food partly because of the extra pomme frites and bread roll we ordered. That big pot of mussels did help too. This is a $25 per person plate. The total bill came up to $83.

We like Chambar because of the reasonable prices. You should go try their mussels. I think you will like it.