Updated: 27th June 2012: This restaurant has closed according to Urbanspoon.com

We met up with Angie (of Sea Salt With Food) again for a Sunday lunch. We wanted to go for Indonesian and choose the Sweet Chili Cafe but it was closed on Sunday. Being already hungry and all set for hot and spicy South East Asian food, we went to the next place we can think of. 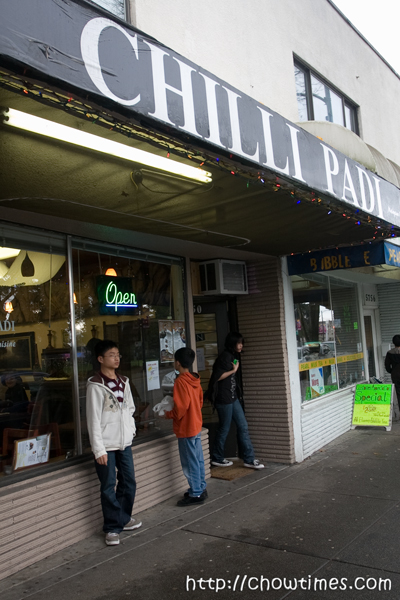 Not knowing really what to expect, I was quite surprised how nice and clean Chilli Padi looked compared to Kedah House when it was here. The decor is quite Malay with rustic wooden panels. The place is quite smallish though … smallish but with a cozy feel to it. Most of their customers, we can see, are obviously very Malaysian … Chinese Malaysians and Malay Malaysians. 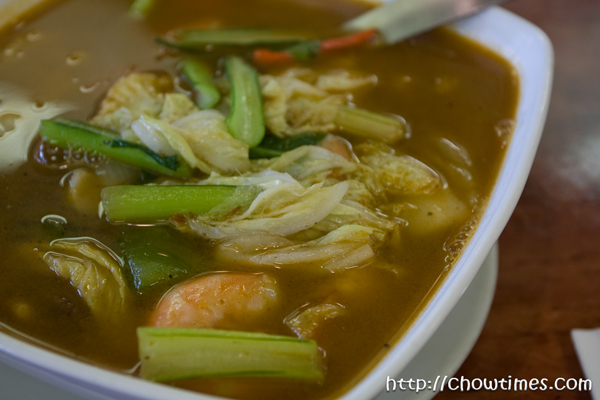 We started off by ordering a very popular soup found in Malay hawker stalls. It is actually a more Thai soup than it is Malay. It is a hot and sour soup but what characterize this soup the most is … 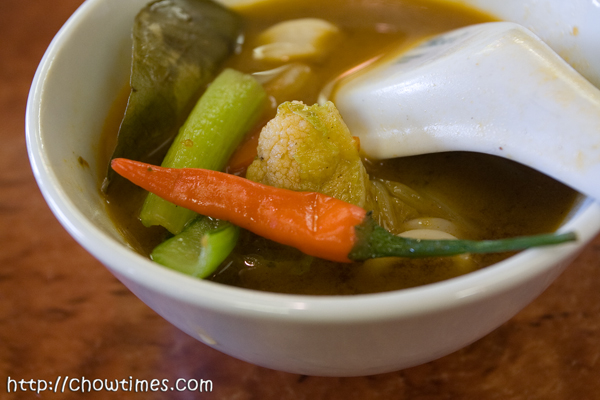 … the Chilli Padi. Of all chillies, I love Chilli Padi the best. Despite it small size, it is lethally hot … just a slight tad milder than habanero which is way bigger. Chilli Padi is called that because of it’s size … padi means a grain of rice in Malay. The big bowl, good for the seven of us, costs $10. 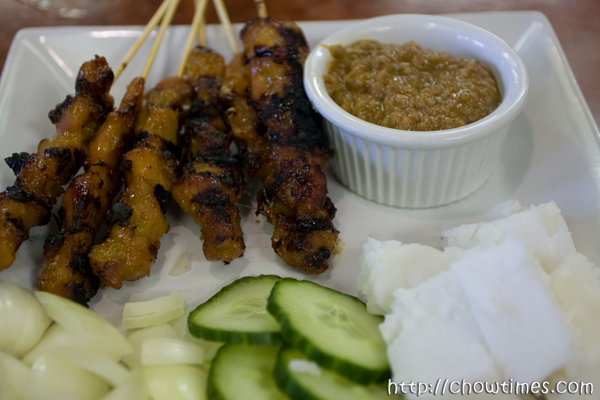 We also got some Satays to share. The six sticks costs almost $7. They were really good and must tip my hat to them because they made it like the way it is supposed to be … with charred bits too. Say, is it true … charred or burnt meat is carcinogenic?

Anyway, I love it. The only downside is they gave so little peanut sauce and they did not even chilli it up. it came with sides of onions, cucumber and cube rice.

Their Rendand was great — some of the best I had ever tried. It is a lot more drier than what we had in Tamarind Hill. The Beef Rendang costs $9.

If you dine out in a Malay restaurant you simply must order Rendang. To me it’s like ordering Pad Thai in a Thai restaurant. Rendang is stewed in mixture of spices and coconut milk over a few hours to a thick creamy sauce. The ultimate is that the meat must be soft and tender … and it was so. Chilli Padi does their Rendang really well.

We also had what they call Kacang Buncis which is basically long beans. It is cut into short sections and stirred fried in chilli sambal and minced dried shrimp. A good dish is when the long beans is fresh and crunchy … it was. $7.65.

The Sambal Sotong (squid) was a complete disappointment to say the least. The texture felt kind of funny in that it is chewy (not springy as expected). Me thinks that the squid must be bordering on going bad. $12 … just wasn’t worth it. We practically left this untouched.

The Apek Char Koay Teow was very good. It is a Malaysian style fried rice noodle in sweet soy sauce with lots of chilli, eggs and minced garlic. I must say they have one of the best Char Koay Teows in Metro Vancouver. $7.65.

I don’t want to talk about the above. Who else but my boys ordered this. Sigh … at this rate they are going, how on earth are they going to inherit chowtimes from Suanne and I.

The bill came up to $75 before tips and taxes. It was not bad considering the amount of food we ordered. If you look at it, their entree generally costs less than $10.

Overall the meal was better than expected but was somewhat marred by the somewhat funny tasting squid. The Beef Rendang was good … the satay was good … the char koay teow was good … the tom yam soup was good. You should check it out yourself.

Oh … we got the 50% discount coupon above because they charged us THREE times on the meal. We got quite a shock that our credit card statement showed the transaction three times. We called them and they promptly reversed the charges … and gave us a 50% off lunch and dinner coupon too. We like the people in Chilli Padi … they are good honest people.

BTW … how do you spell Chilli anyway? With a double L or a single L.