You know what is the hottest restaurant in Vancouver right now? It is this restaurant called Meat and Bread located in Gastown. It seems everyone is raving about it (despite the high prices) … and I am not sure exactly why.

The food there is simple, no frills … just meat and bread. The choices you get there can be counted with just one hand (just four items!). Given what they offer on the menu, I think they could even sell it off a food cart. They don’t need a restaurant for this.

I am sure the food is good and that plays a big part in its popularity. But maybe too its the simplicity of the food. I don’t know … I still have not figured that out.

No, I have not tried Meat and Bread (the restaurant) yet. I will some day when I get the time to go downtown to try it. I just need to convince myself that it is worth the trip going all the way there just for meat and bread.

But for now … I’ll just do my own meat and bread.

I think I want to write a series on “Meat and Bread”!

Suanne and I was brainstorming about the term “meat and bread” over the Christmas holidays. This was following the thoughts about having egg with Milo – strange food that we enjoyed as a kid.

As we wrote down every combination of meat and bread we know of, we were surprised how many possibilities there are. Some of the combinations we had tried before but there are some crazy ones we thought of that could possibly work.

And then suddenly we realize why the simple combination of Meat and Bread is something that everyone could relate to, even across all cultures.

So for today, I want to share with you a Meat and Bread that we have been having at home for sometime already –> croissant with bakkwa.

Bakkwa. One way to describe this is calling this … Chinese style jerky but I don’t want to do that. This is because this is definitely very different from the beef jerky you find locally.

I had never taken to liking beef jerky at all. It is because it is tough and dry. You would probably think the same way too after you had tried the bakkwa. 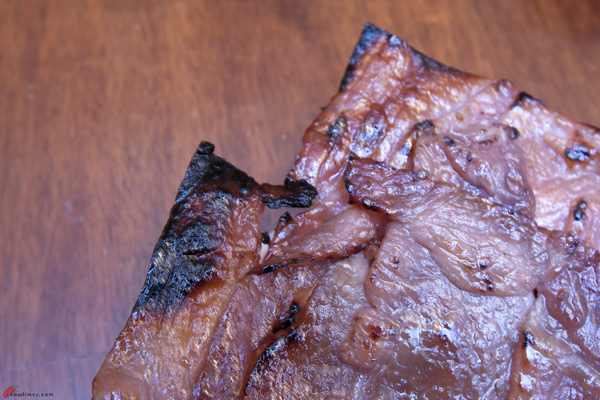 Bakkwa. One way to describe this is calling this … Chinese style jerky but I don’t want to do that. This is because this is definitely very different from the beef jerky you find locally.

I had never taken to liking beef jerky at all. It is because it is tough and dry. You would probably think the same way too after you had tried the bakkwa.

Suanne makes bakkwa at home. She does it only during summer and sometimes brings the bakkwa for picnic. It’s always a hit with friends because it is not something you see in picnics. She had posted her recipe here before … go check it out.

It’s winter now and so decided to finally go buy some from the stores instead of making it at home. One of the more well know places for buy bakkwa is Bee Kim Heng which is located on on Fraser and 26th.

We had never tried the bakkwa from Bee Kim Heng before. From the name I think how similar it is to a popular Singaporean brand. So immediately I think that they make it Singaporean style which is quite identical to the Malaysian style.

Bee Kim Heng made it into the Vancouver Magazine’s list of 101 Things To Taste Before You Die. So there you go … if you had never tried it before, take a moment and update it on your bucket list. I’ll wait for you while you do that.

Bee Kim Heng had been around for 10 years already. This place hardly sells anything else but bakkwa. They have a couple of other items but really their bread and butter is the bakkwa. 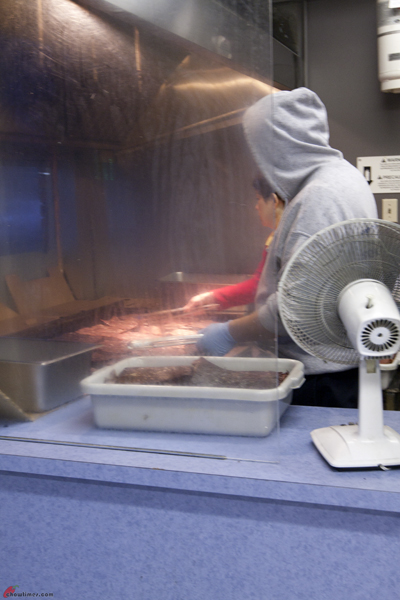 The place is quiet a dive and no, you don’t eat in here. They grill the bakkwa right in front by the window. Besides a few oddly placed fridges and boxes, that’s all there is.

They are friendly and did entertain our odd questions. So if you are unfamiliar with buying bakkwa, you should be alright as they will take their time to help you understand what they have to offer (which wasn’t complicated anyway).

Bee Kim Heng only has two types of bakkwa – just pork and beef. In Singapore and Malaysia there are more varieties. What I like best is prawns.

I was earlier saying about how similar is the name Bee Kim Heng with a top brand of bakkwa in Singapore which is Bee Cheng Hiang. A chowtimes follower, MadamYak, told us that Bee Cheng Hiang is so popular that people line up for 2 hours just to buy their bakkwa … and they limit you to only  ONE box!

Closer to home in Vancouver, we also have Soo Jerky but they don’t make it fresh. Soo Jerky has a plant in Richmond from which they distribute their pre-packaged ones throughout North America.

Bakkwa is never cheap. In Bee Kim Heng, it is $10 for half pound. It is the same price for pork and beef. Frankly, if you ask me, I say you should go for the pork version. The beef is a tougher meat.

Bee Kim Heng also sells chicken biscuit which is $7 per pound but sold out that day.

We ordered one of each (pork and beef). We asked that they give us the ones made hot off the grill because we want to eat some in the car. Freshly made ones are the best because it is juicier. Without us telling them, they even knew to leave the packaging open and gave us serviettes.

Bakkwa is very popular during Chinese New Year in Singapore and Malaysia. People buys a lot of this to give away and it is always appreciated. So with the Chinese New Year coming up within the next 3 weeks, I won’t be surprised that Bee Kim Heng will be very busy. 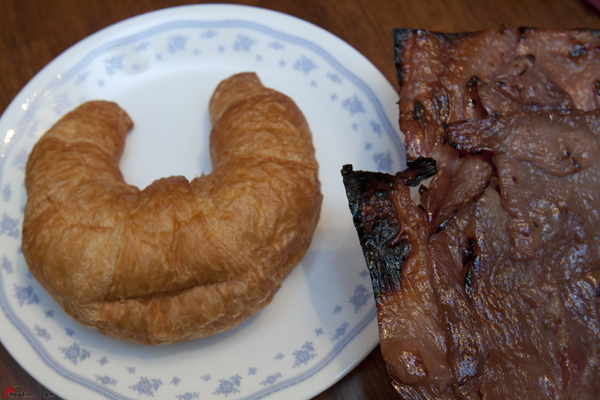 So … was the bakkwa from Bee Kim Heng good. My answer is “ boh swee”.

No, I did not like it. You see there are two general types of bakkwa. Some make it using slices of meat while others use minced meat. In Bee Kim Heng, they used slices of meat which unlike minced ones are much more fibrous and hence much more tougher. So it was extremely chewy although I have to add that the flavour is there.

It’s not so bad with the pork version but the beef version, I did not like at all.

I better not forget about the “bread”. We like the croissant from Costco and we often get a big box of it each time we shop there. We like the softness and the “butteriness” and it does keep long enough for us to finish it all.

So there you go … the first of several Meat and Bread. LOL!

Maybe Meat and Bread (the restaurant) could adopt this in their menu too because they need to provide more variety!

BUSINESS HOURS
9:00 AM to 6:00 PM
Daily except for Mondays
Tags: Food Review, Vancouver

Circa Restaurant and Lounge on Granville, Vancouver