I had just closed the poll of your favourite Siu Yook (Roast Pork) shops in Vancouver. There were a total of 121 voters and each voter was allowed to select more than one of their favourite shops. 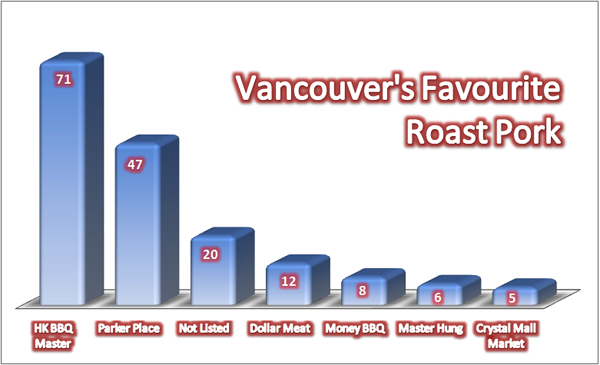 It seems like the HK BBQ Master won outright with 71 people out of 121 people voting for it. In terms of percentage, 58% of the voters like this CRA Award Winning restaurant although this restaurant actually won the award for BBQ Pork and not Roast Pork.

My personal favourite Roast Pork shop, Parker Place, came in second with 47 votes (39%). It was running neck and neck with HK BBQ Master right up to two days ago when it pulled ahead.

Of course this is a non-scientific just-for-fun poll. I am sure there are a lot more good Roast Pork shops that you like and which I did not list. That is why the third highest category was the “Not List” category.

Here, I have put side-by-side the pictures of the Roast Pork from HK BBQ Master and Parker Place. Here it is …

Judging from the pictures alone, I think we can see which one looked more delicious. I think the general differences between the Roast Pork of these two shops is that one is fatter and greasier (HK BBQ Master) and the other is leaner and drier (Parker Place).

This is primarily due to the fact that HK BBQ Master only makes their Siu Yook with the pork belly which traditionally is considered the most succulent part of the pig.

On the other hand, Parker Place is a meat shop. They roast the entire pig as opposed to just the belly.

Thanks a lot for participating on the poll. I enjoyed learning a little bit more about siu yook. I am beginning to see how passionate people are on what they consider the best siu yook.