I was driving earlier on this week along Fraser on the way home. The traffic was crawling because of some hold up in the intersection. It just happened that my car was in front where T-Hut the Chiu Chow restaurant used to be.

The new red and black signboard caught my eye. Alk-O-Bar, it says. At a glance I thought that someone had turned this place into a bar and such an odd location too for bar. But because my car wasn’t going anyway and on closer look I saw pictures of food. I thought I just pull over to the empty parking space in front of the restaurant.

The signboard does not tell the whole story. Alk-O-Bar is not a bar. It is a restaurant. Most of all the other signs indicated that they serve western food. You know things like Shrimp Cocktail, Club House Sanwiches, Chicken Wrap, Burgers, Steak, Fish & Chip.

It was the other less conspicuous half of the menu that caught my interest. It was words like sisig, menudo, pancit, tapsilog, longsilog, arroz caldo, bistek, kare kare, embotido, daing na bangus, rellenong bangus. Gosh … I don’t even know what most of these are.

But I know this will interest some of our Filipino followers, particularly Crispy Lechon and Pinoy Gourmet. So I decided to come back to TOFTT (take one for the team). Maybe I should say that I am taking one for the Pinoys and Pinays.

BTW, is using the name Pinoy and Pinay to refer to Filipinos widely accepted these days? I thought it was such a endearing name but then I checked Wikipedia and found the following:

Pinoy was used for self-identification by the first wave of Filipinos going to the continental United States before World War II and has been used both in a pejorative sense as well as a term of endearment similar to Chicano.Both Pinoy and Pinay are still regarded as derogatory by some Filipinos though they are widely used and gaining mainstream usage

Sorry if I had used the name wrong but am trying to understand more. I guess Pinoy Gourmet is one of those who proudly carries the Pinoy name.

So yesterday on the way home from work, I decided to drop by for lunch (yeah, I start work at insane hours and end work early too). I wasn’t expecting much from Alk-O-Bar because I couldn’t find anything of them on the internet.

Alk-O-Bar had pictures of their food plastered on the wall outside the restaurant. The pictures were bright and colorful but it wasn’t particularly clear and I couldn’t make out what it really was.

Wow, they sure … spruced up the place. A lot.

It was a nice dining environment. Very clean and very neat. They played soft music. There were two other tables taken at the time when I was there. Both Filipinos. They seems to know the owners because I overheard the customers saying “say hi to your mum OK?” on their way out. 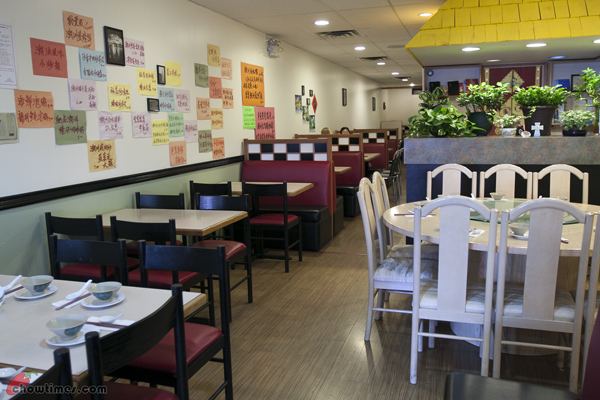 Out of interest, compare the picture above when Alk-O-Bar was still T-Hut. As you can see, they have the same chairs and tables. The chequered undersized booths are still there. Even the faux roof over the counter is the same. A nice coat of paint sure does wonders. It tells me that it doesn’t take a lot to make a restaurant nice and cozy. 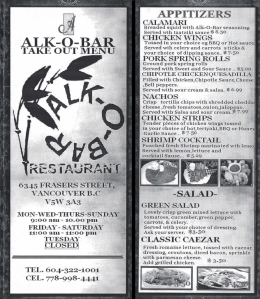 The menu was quite interesting. Half of it was the western dishes but it was the Filipino half that I was more interested in. The Filipino section is the one in the middle above. They even have Chop Suey, the Filipino version.

There were so many dishes I wanted to try but I am just alone. After quite a while of indecisiveness, I decided that I should get the set meal called the Filipino Meal. It is not on the take out menu above.

Now, this is the part when some of you will feel your heart beating faster and harder. I know the feeling. Sometimes your heart beat so fast that you even think that you are seeing things. You would swear that the food seems to be jumping out at you.

No, don’t rub your eyes or adjust your monitor. This happens all the time when you encounter comfort food. This is what is called the “chowtimes effect”.

The Filipino Meal above is $8.50. It was awfully, awfully delicious. I am not sure about the taste to Filipinos but I was utterly impressed. For that price, I thought it was also a great deal not just because of the variety but also because of the serving size too. 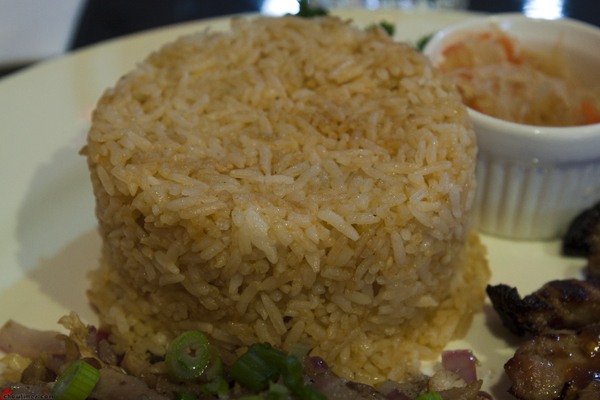 I dug into the huge mound of Java rice first. It was so inviting and I could smell it.

With rice like this, it just blew away my theory about “jhup and rice”. You don’t need jhup with this rice. No sir.

The rice by itself was so flavourful that I could just have this rice alone as an entire meal. The secret to this? Garlic and Butter.

I mixed the Sisig with the rice. It has a nice sourish note that blends so well with the Java rice. It was the lemon (and more garlic!) along with some raw onions that makes it so delightful to eat. It also had the perfect level of moist. Sometime I come across dishes like this that are too dry.

As I was eating this I was really thinking that, oh man … this place could be a hidden gem. 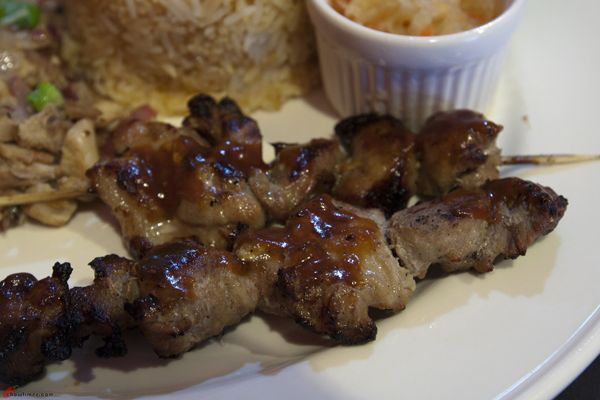 It was not thick and chunky like the ones I had seen but it wasn’t puny. It’s just that the size doesn’t jump out at me with this one. I always associate Filipino Pork BBQ as the supersized version of the Malaysian satay. 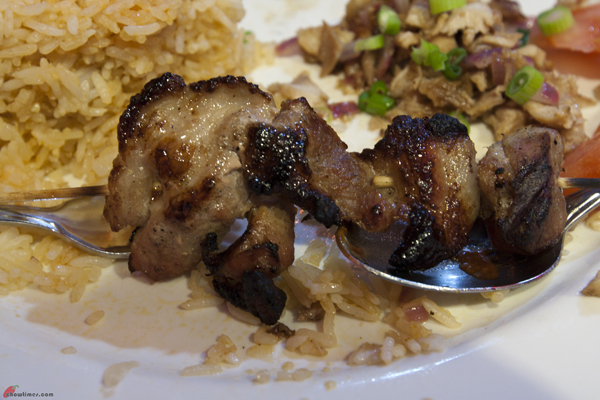 I know it is not something everyone likes but this is what I like best – sides that are seriously charred and that they have fatty parts too. Oh yeah!

The meat is a tad chewy on parts but it is also succulent. Yes, I like it is both fat and lean meat … just like a char siu satay.

First time I had this. This is called Atchara. I was told this is pickled papaya. Very nice complement to the rice and the sisig. It added yet another dimension to each spoonful.

The Halo-Halo ($3.25) was a bit too sweet for me. I saw that they manually shaved the ice and so the shaved ice were a bit big and it hardened. So I left it until the end of the meal to melt a bit first before I had a taste of this.

I like that they don’t have much beans in it but all in all, it was too sweet. Actually, it was super sweet. *shudder*

Alk-O-Bar had been opened since Boxing Day last year. It is run by a father and son team. The father is the chef and the son looks after the front.

They said that business had been slow but is slowly picking up. I just think that perhaps it was because from the outside it does not say very well what they are good at. I really think that this is one Filipino restaurant that could turn out to be popular given the large Filipino community and the relative dearth of Filipino restaurants in Vancouver.

I hope some of you will give this a try and let me know what you think. I want to know if the Filipinos think this is good Filipino food or not. For me, I enjoyed this a lot.