After that simple Mohinga and Curry Noodle Soup lunch in the New Mitzie’s Restaurant, we thought we have some room for some desserts. There was nothing much in terms of desserts in Mitzie’s. We thought of going over to New Town just down the street which we did. Although we ended buying something there, we had it to go for the following day’s breakfast.

The moment I suggested to Suanne, “how about the sticky rice durian in Phnom Penh?”. She immediately said “Yes, let’s go”.

We had been to Phnom Penh before. We blogged about it 2.5 years ago in this post here.

Phnom Penh has to be the one of the most blogged about restaurant in the whole of Vancouver, if not the most. Just check the list of blog posts on Urbanspoon here. Guess how many blog posts were recorded there … 51! And with this post, that makes 52.

The reason is simple. They had won countless awards over the years. Some of their dishes are legendary.

Not only the awards they won. They had visits from some of the top celebrities in the foodie world. Yeah, the celebrities left their mark on their take out menu which they pin up on the notice board by the entrance and waiting area.

Take a real close look at who the best foodie celebrities are. If you can’t read it, click on the picture above and it will show larger in the next page. The top celebrities are ranked in terms of importance from left to right, with the left being the the most famous of all.

Kekeke … “Ah Ben” and “Ah Suanne”. I thought that was funny.

The original signed copies were in laminates and just pinned on the board in the open. I asked Suanne to remove Anthony Bourdain’s copy and stick chowtimes’ in its place, she refused.

I then asked Suanne to pin chowtimes OVER Anthony Bourdain’s, she also refused. She is chicken because the people at the waiting area was wondering what we were doing. We scrambled out just as the waitress was coming over to see what the matter was going on. (The picture above was taken after our meal).

Hey you gotta give me credit. I had to ask the waitress for a take out menu which they do not put out in the open.

This place is so popular that there is often a wait for tables at all hours of the day. Yeah, we had to wait 5 minutes even at 3:00 in the afternoon. 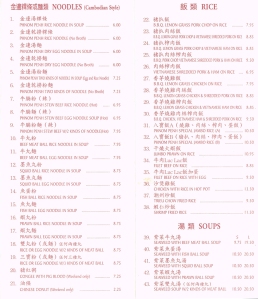 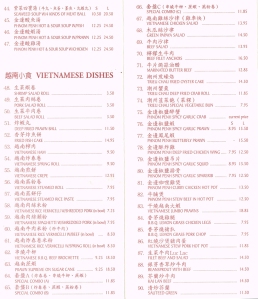 You can click on the menu pages above to show it larger. Their better dishes is on the left most page where the Kitchen Suggestions are listed.

I wanted so much to order the beef carpaccio which I kept reading of in other blogs but Suanne kiboshed the whole idea. She doesn’t want any raw meat. What am I gonna do to make her change her mind, huh? It is because of Auntie Suanne that you don’t see a lot of Japanese restaurant blog posts on chowtimes.

One other favourite dish that people order is the dry noodles. We saw a lady seated next to our table sprinkled sugar on one of the dry noodles — not once but twice. That was the first time we saw people doing that. We did not order the noodles as it is too heavy after just having had the soup noodles at Mitzie’s. But next time we are here again, we will try to sprinkle sugar into the dry noodles.

Have any of you ever tried with sugar before, or seen people doing it? 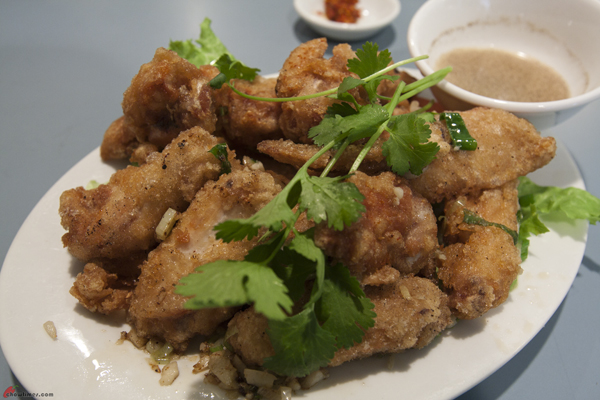 Suanne was “pai seh” (Fujian for “embarassed” or something like that) that we were going to order just snacks. I thought it was OK. Nothing to “pai seh” about.

However, the waitress remarked “Is that all you want?”.

“Are you sure you don’t want to order more?” she asked again. 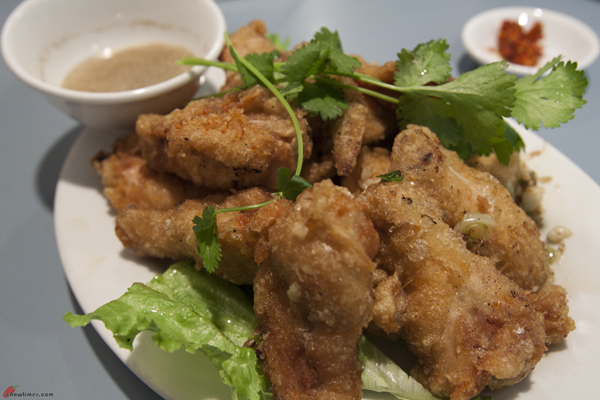 The Chicken Wings from Phnom Penh is made of legendary stuff. Yes, many people swears that they make the best deep fried chicken wings in town and I agree totally.

When we order this, the waitress asked us if we want half or full order. When asked, she advised us that the half order has about 8 to 9 pieces of wings. It was a lot of wings. The half order is $8.00 while the full order is $12.50. They also have deep fried prawns and spareribs which is equally just as great. The items are on the third page of the menu above.

The wings were served with a peppery vinegar dipping sauce. We did not really need that dip and enjoyed it just as it came.

We can detect a taste of sweetness on the coating like there are sugar in it. There are hardly any batter in this.

The tidbits of chopped onions/shallot and green onions are good. Great with rice but since we did not get rice, we top it on the wings as we ate it.

There were sheets of durian and topped with sweetened coconut milk which makes it really creamy and rich. It was served slightly warm. It wasn’t as good as we remembered the first time we had it. It is just a few small spoonful and it was all gone in no time. Wished that there were more of it.

BTW, Phnom Penh accepts credit cards but you have to go to the counter to pay.

Yeah, Phnom Penh is certainly one of the restaurants I would recommend visitors to our city. The prices are cheap and the food is really good. The problem is you want to order everything which is impossible.

How many of you have NEVER been to Phnom Penh? Show of hands?

If you have not, you MUST include Phnom Penh on your bucket list. After all, famous foodie celebrities have dined there before.