Alcatraz, also known as The Rock, had over the years been a lighthouse, a military outpost, a prison and now part of a national park. It is perhaps the times when it was a prison that captures the imagination of visitors the most. It lies smack right in the middle of the San Francisco Bay.

We almost missed the boat to Alcatraz. You see, we started off from the Ghirardeli Square and thought that it is just a short walk to the pier … not knowing that it is actually quite a distance. And to add to that, there were so much things to see and do in and around Pier 39 that we lost track of time. By the time we realize what time it was, we had just 15 minutes to get to the jetty. Man! We practically ran all the way there!

online two weeks before the tour and even then we had only the hot afternoon tour to choose from. I heard that if you try to line up to get on board the ship, it will be a very long wait.

The prices were not cheap for the four of us … almost $100. That’s for the cruise to Alcatraz and includes the entrance and audio tour. The website for getting tickets is here.

The tour was well organized which started off from the room where all new inmates were first given their prison garb and open shower.

Each of us had an audio set to follow as we walked throughout the prison complex. It was really interesting … not only to Suanne and I but the boys was quite mesmerized too with the stories and description of the conditions in the prison.

The prison cell below were perhaps some of the “best”. The isolation cells were worse and almost completely dark except for a small light bulb. 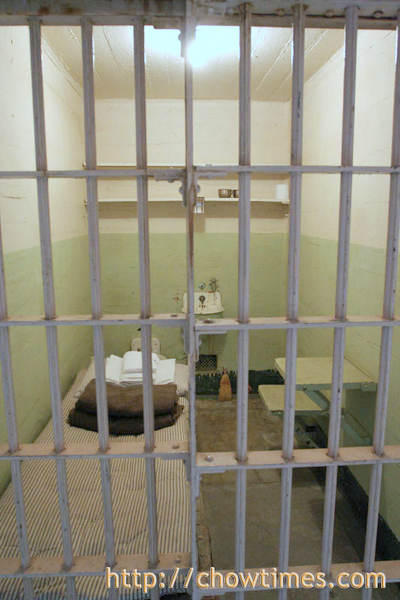 Many people took pictures behind the bars … well, we had to take some for ourselves too. BTW., crime does not pay … agreed?

I bet the view from the prison must have been torturous for the inmates. Right from across the bay is the beautiful city of San Francisco.

We spent most of our time just following the audio that I did not take much pictures here.

In all, it was an entertaining tour, if I may say. My favourite part of the audio tour is where they described how two of the most famous escape attempts were carried out.

San Francisco Vacation: Getting Around SF