After the Sun Run, we decided to go for sushi. I knew the boys would have loved it and planned to go to the Sushi Garden located along Kingsway across the street from Metrotown. However, the very popular Sushi Garden was closed. Dashed!

So we walked a few doors away and went instead to a smaller Sushi restaurant. It is called Yakko Sushi (located on 4689 Kingsway). There a quite a few sushi restaurants in this stretch of Kingsway … at least four that I can think of.

I have learned to like Kikkoman soya sauce which is sweet. At Yakko they serve Yamasa soya sauce. I don’t quite like this Yamasa brand. It had a stronger intense taste and a bit too salty for me. Not sure about you but I use the soya sauce to flavor the rice.

Oh, what do you think of the practice of mixing wasabi with soya sauce? I see a lot of people do that but I find that taste strange. 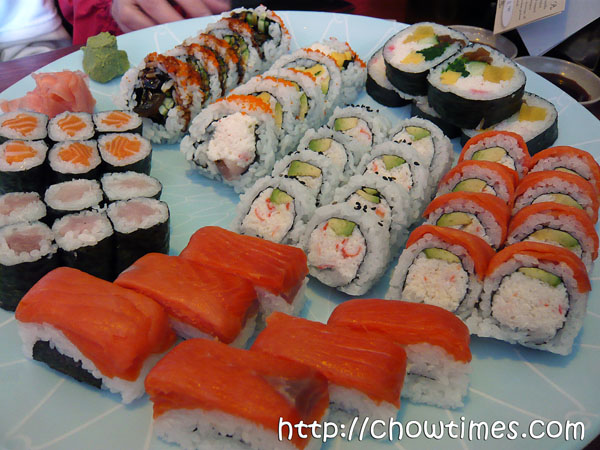 We opted to get one of their Party Trays. Their Party Tray H costs $27.00 which was just enough for the four of us. I felt that it was a bit expensive because I think we can get more for $27 just a few door down at Akasuka Sushi. Anyway we have about 49 pieces in all in this plate.

Oh, I had seen some places where they serve such things on wooden boats. That would have been fun for the boys but this place did not have that. It was kind of boring the way they presented it on the large plate. 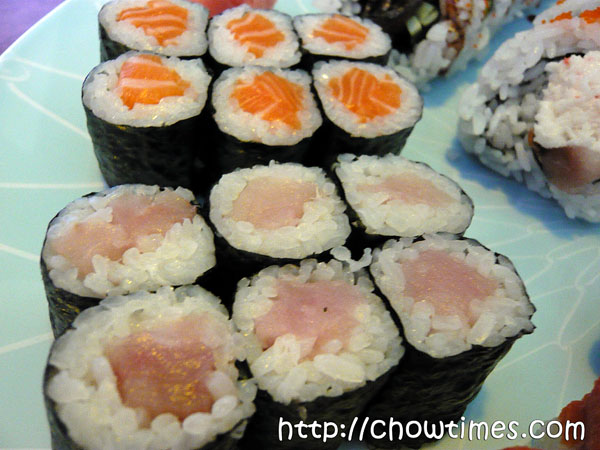 The simple Salmon and Tuna Rolls were the first everyone dug into. I think this is because it is the easiest and least messiest to eat. I believe this type of maki is called Hosumaki … simple, small maki with a single filling.

Then there are the Pressed Smoked Salmon. We did not like these nigiri sushi in that they had smoked salmon … would have preferred fresh salmon on it. We noticed that there is a thin nori in between the rice … not sure what the purpose of that though. 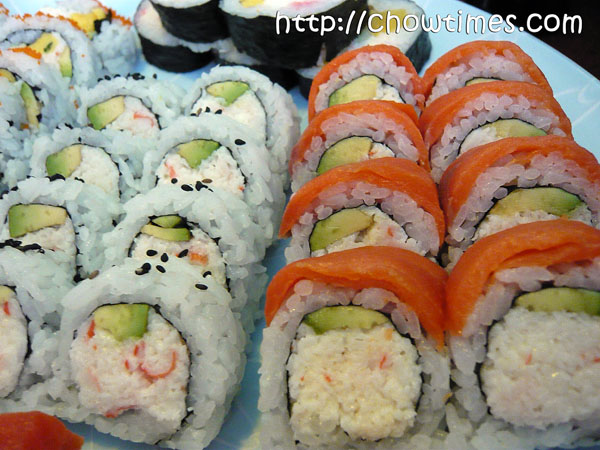 Then there are the uramaki, which is basically made of three layers … rice in the outside with fillings in the outside and a nori in between them. I gather that this is not Japanese but rather types of sushi to suit the North American taste (i.e. more meat, bigger pieces and and more importantly COOKED!).

Above is the BC Roll & Yakko Roll. The BC Roll is the pride of British Columbia. It is the one on the left. We love BC Rolls. It has salmon which is grilled in a sweet sauce and a bit of cucumber. My boys pull out the cucumber every time — they hate cucumbers. 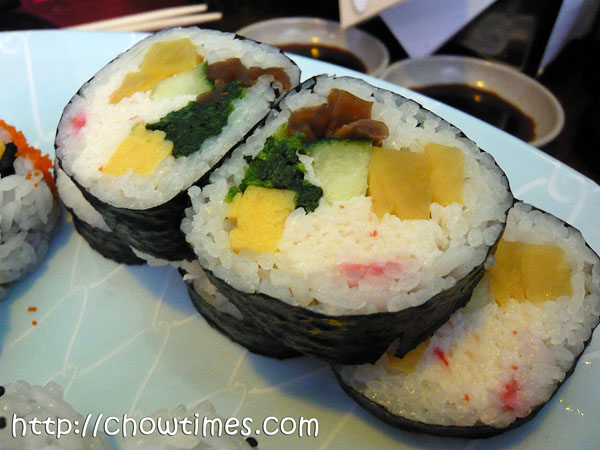 Futomaki is simply giant maki. They are much bigger but thinner. Reminds a lot of the Korean whatchamacallit sushi which is more coined shaped. This one is a vegetarian style Futomaki. The boys did not touch it, I am a meat person and so guess who ended having to finish this off.

Nice! I think we’ll go for more such type of sushis in future.

Sushi Platter from Matsuyama in Richmond