We started day 4 in Washington DC with breakfast at Johnny Rockets. This is going to be a day we’re going to venture outside of Washington DC. After three days in the DC area, I guess we had seen enough.

At this particular morning, we at least have more choices having just discovered the Food Court at the Union Station the day before. The food court is kind of quiet in the morning compared to dinner time but at least this food court is opened early.

Johnny Rockets is actually a burger joint. Their tag line is The Original Hamburger. Anyone know why they call themselves the original hamburger? I am quite certain they did not invent the hamburger.

Their intention is to create an atmosphere of the good old fashioned American diner in the 1960s or something. They have a mini jukebox at the table. It was just 5 cents. I popped a nickel into it, selected the song “Donna” but it did not work. Oh well, it was just 5 cents.

Got ourselves a cup of coffee each. It was pretty good … and free refill some more. All coffees should be of free refill like this — especially when they come by asking if we wanted more without us asking for it. Little things like this makes me happy. 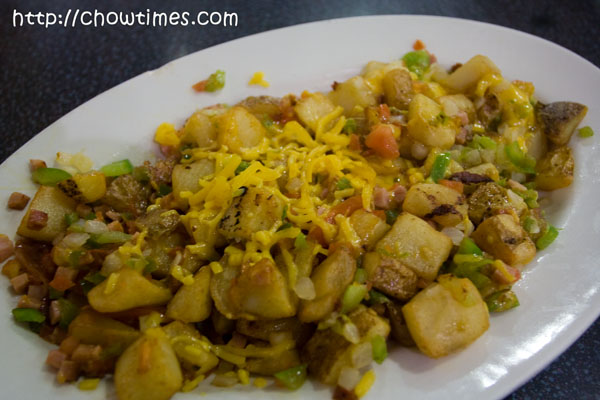 I am not sure where Suanne got the appetite from but she ordered ‘The Works’. It is made of fried potatoes with onion, green pepper, cheese, bacon, tomatoes and ham. A delightful mix of everything. It was an excellent choice, I say.

The waitress offered to serve the chili on the side as she is not sure if Suanne will like the chili. It was so thoughtful of her. 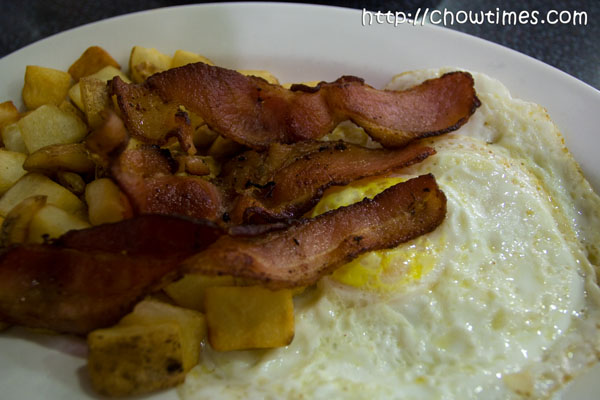 For me, I ordered the “Eggs My Way”. It was alright … nothing to really shout about except that I love eggs (and Suanne hates them). It consists of 2 eggs, some bacon, fried potatoes and toast. 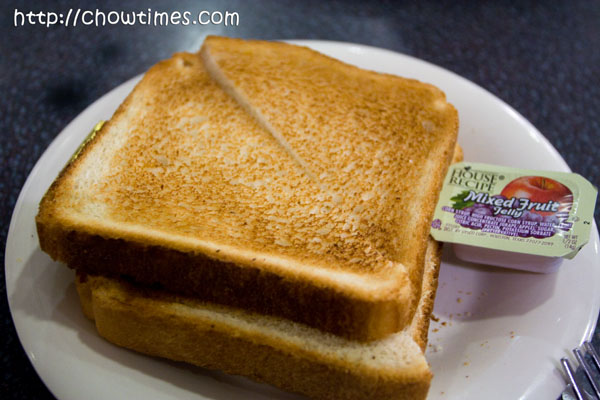 Toast was alright too. Suanne’s breakfast beats mine hands down. 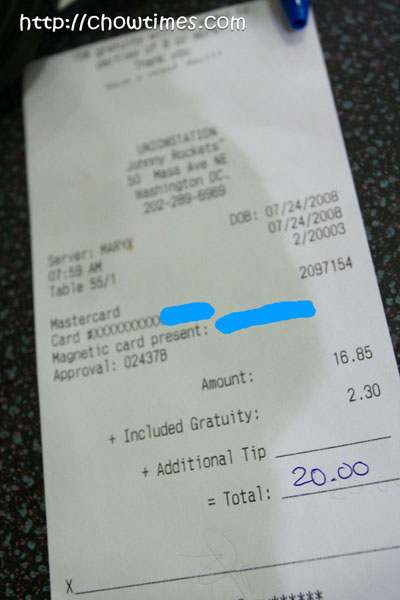 The total bill came up to $20 including taxes, tips and ADDITIONAL tips. If not for the fact the jukebox swallowed my 5 cents, this breakfast is perfect. The food was alright but the service exceptional. We enjoyed a quiet unrushed breakfast … just like the way breakfast is meant to be, right?

Alright, boys and girls. I had just closed the poll. As much as chowtimes is MY blog and I get to blog about pretty much as I please but I am hearing most of you are foodies at heart. So, this is what I will TRY to do. I want to really chronicle this vacation of ours. As Suanne puts it, we want to chronicle the vacation for ourselves. On the other hand I will make every attempt to post one, maybe two, times a day so that I get over with this series sooner than later. Also, am going to intersperse this series with more of our recent local food adventures. BTW, thanks for taking the time to respond to the poll.