It was one of those weekend mornings again. Suanne had a subtle way of hinting that she does not want to prepare breakfast but not wanting to say so. I don’t know how to describe it but I can pick up the vibes — unmistakably.

I did not know where to go and the boys keep asking me what’s for breakfast. When I don’t want to answer, I just tell them “it’s a secret”. It used to work because they like surprise … not any longer. They now follow up with another question … “where are we going?”. They hate it when I drive across the bridge because it meant a 30 minutes drive, at least.

I did cross the Knight St Bridge and headed up Main Street in Vancouver. Then at East 29th, I saw a queue outside of the orangey restaurant. It is definitely a dim sum place … and a cheap one too. I can tell because many of the customers are seniors or with large families.

I thought we will not go wrong eating here since there was a queue even though the walls outside was all defaced with graffiti.

This place is called King’s Chinese Cuisine and is located on the intersection of 29th and Main. 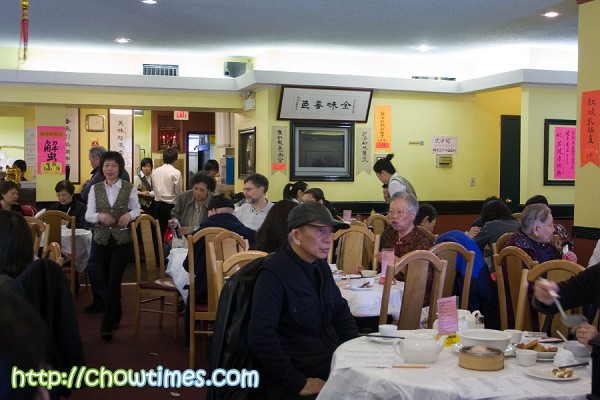 The wait was not too long, about 15 minutes. We had to walk right into the back of the restaurant to deposit our name for a table. It is a large place and so they are able to turn the tables very fast. It is also a mad house … the hustle and bustle here is very typical of a neighborhood Chinese Dim Sum place. It’s noisy and obviously very popular.

This is a place where they use plastic sheets for table cloth. With these, cleaning up a table for the next customer is just a matter of seconds. Pull up a layer, tie it up in a bundle with all the left over food and bowls and the table is all ready. Function over form is how I describe it.

Even before we got seated, we were already asked what tea we wanted. I have no idea and I always kept my head down and pretend not to hear … I always left it to Suanne to decide. She had no idea herself too. So she always blurts out a name that comes to her mind. This time it was Tiet Guan Yin (Iron Goddess of Mercy). One of these days, we got to learn the finer points of Chinese tea. 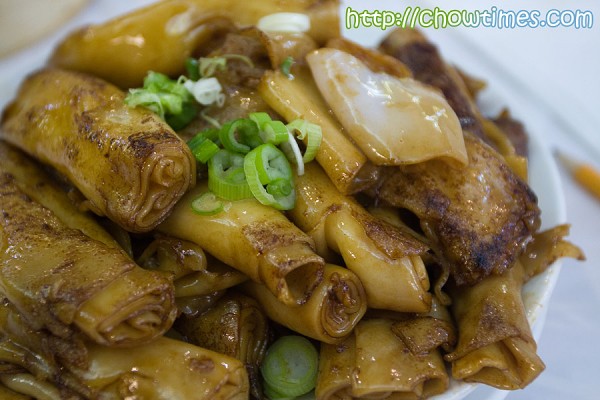 I see a lot of tables ordering the Fried Rice Noodles. It must be their specialty and they looked good too. You can tell when you see parts of it charred … meaning that they have “wok hei” when they did this.

Kind of hard to explain what “wok hei” means — anyone wants to give that a try?

The Fried Rice Noodle was good on it’s own. But the sweet sauce imparts a lot of flavour to it. Their sweet sauce is done perfectly … not too thick and not too light … just perfect. No wonder so many people ordered this. This is categorized as a “special” dish and costs $4.75.

They serve their Gai Lan kind of dry. Normally in other places it is drizzled with oyster sauce but here they serve the oyster sauce in a small saucer on the side. The stems are big and tastes a little bitter’ish. It was a lot of it. Since the boys did not want to have anything to do with green food, Suanne and I had a tough time finishing it all. $4.75.

They serve their Gai Lan kind of dry. Normally in other places it is drizzled with oyster sauce but here they serve the oyster sauce in a small saucer on the side. The stems are big and tastes a little bitter’ish. It was a lot of it. Since the boys did not want to have anything to do with green food, Suanne and I had a tough time finishing it all. $4.75.

We like this next one. It is simply called Jelly Fish. However, it is more than just jelly fish. It is topped with bean curd roll filled with mushroom, pickled daikon and carrot. You can imagine the variation of texture in this dish (soft jelly fish with crunchy daikon).

The light vinegar was just the right dipping sauce for the cold, almost bland bean curd. We like this a lot and it is $4.75.

The Deep Fried Tofu serving was much bigger than we normally see else where. This too, they did very well. The outer skin is deep fried to a crunch. From the outside it looked harmless but it was piping hot when I bite into it. This is $4.75 too.

The Sticky Rice serving is also large and more than enough for two people. As a matter of fact, most of their servings comes in larger portions than most other restaurants. This is also $4.75.

The Steamed Chicken with Fish Maw and Chestnut is $2.30. Lot of chicken compressed and then steamed.

There is also the fish maw in it, considered an inexpensive delicacy in Chinese cuisine. 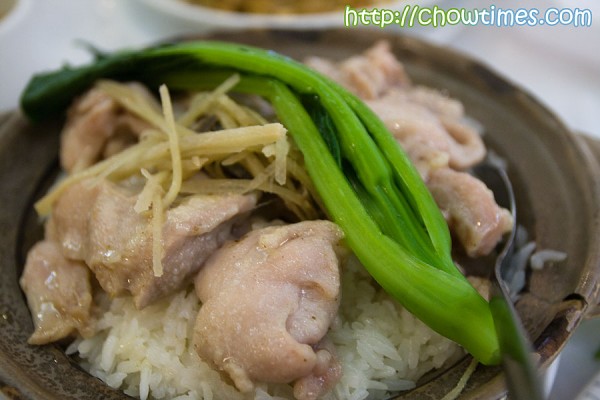 The Steamed Chicken and Salted Fish on Rice is served in a claypot. It came quite late and so I guessed they actually make the claypot rice only when ordered. The rice was good and together with sweet soya sauce, this is very filling. You probably guessed that it’s our boys’ favourite too. For $3.95, this is more than “not bad”.

The Siew Mai Dumplings is also … bigger than normal. And in it too was quite a bit of prawns. This is only $2.30. 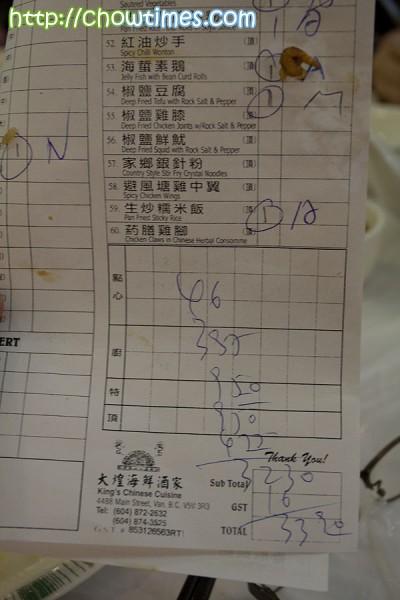 Regrettably, we overate again. The bill came up to just over $33 before tips. I can see why this place is so popular. Not only is it cheap but their portions are big.

King’s Chinese Cuisine serves dim sum until 2:30PM after which they start changing the plastic table cloth to proper cloth ones for dinner.