I was telling Suanne that Vanessa (who we had never met) is like our eating consultant. This time she brought to our attention of a new Hongkong Style Cafe in Richmond.

Come to think about it, we had not come across any new Hongkong Style Cafes for quite a long time. It is like Hongkong Style Cafes out of fashion these days along with Vietnamese Pho and Taiwanese Beef Noodle Houses. Instead there are more and more mainland Chinese restaurants, particularly Shanghainese and Szechuan. I think it is due to the shifting demographics of the Chinese immigrants to Richmond the past few years. 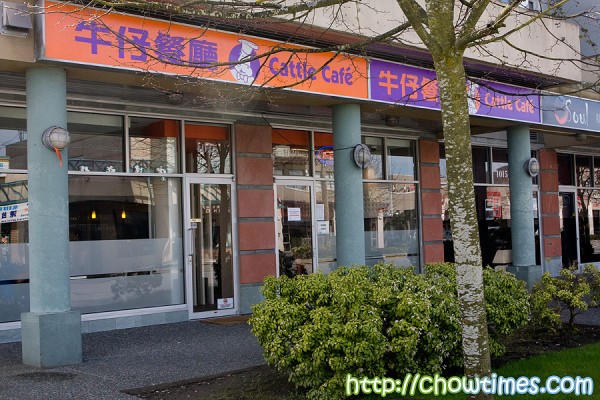 Cattle Cafe is located on the Alexandra Road in Richmond. Alexandra Road is the “wai sek kai” of Richmond. Concentrated on this block is some of the better restaurants ranging from cheap eats to high class restaurants with chandeliers. The parking on this street is impossible especially during dinner time on weekends. 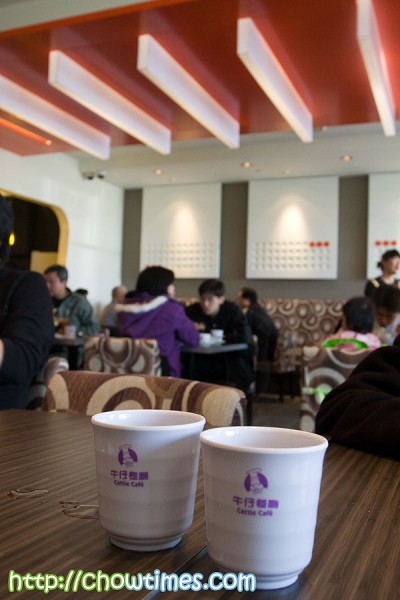 Cattle Cafe is new alright. Everything is so sparkling clean and new. The decor is bright with clean lines … certainly a lot better looking than the oldies like Kam Do, Silver Tower, Lido, E-Canteen and such. The place is not too big, perhaps half the size of Kam Do.

It was quite busy when we were there and had to wait for a table. Talking about tables, BOTH our tables were unbalanced and shakey for the good part of the time we were there. For as long as I remember, I had not come across having an unbalanced table, let alone two. I blame it on their relative newness and oversight. No big deal but it was downright annoying when one is having noodle soup. 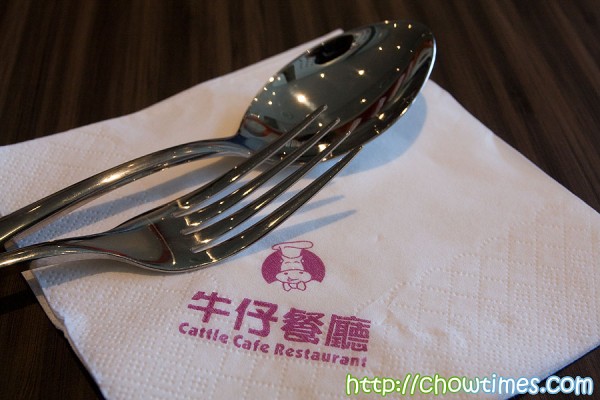 You gotta love these type of new places where everything is new. Even the cutleries are shiny.

Service too was very quick and eager — we like that and does feel our patronage was appreciated. 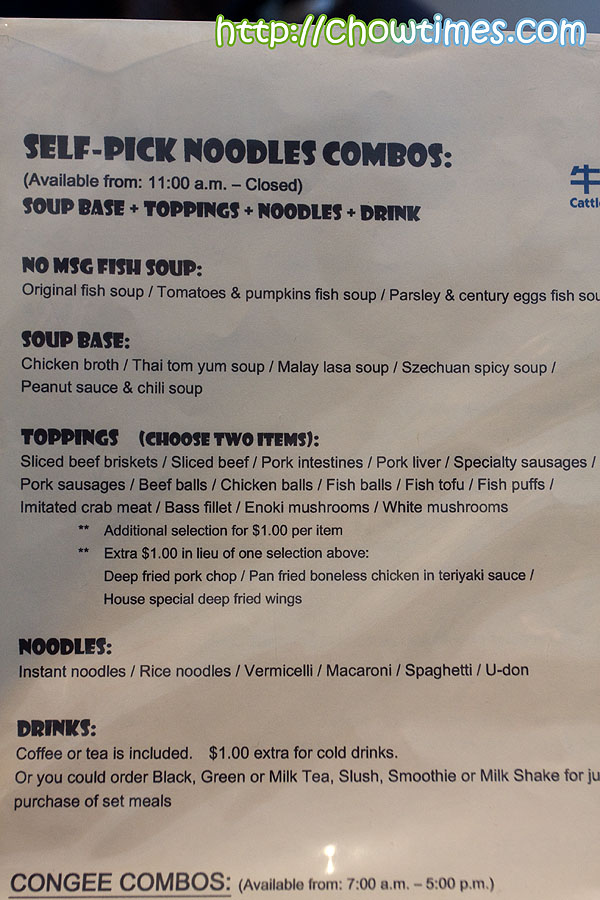 Their menu is where they are different from all the other Hongkong Style Cafes. Instead of huge menu itemizing every single combination possible, Cattle chooses to do it choose-and-mix style.

For instance, their Self-Pick Noodles Combo allows you to assemble your own noodle by selecting a soup base, choice of two toppings, the noodle type and a beverage. You may sort of upgrade for a price. It is not just combo for noodles but also for congee and toasts too. It’s a good way for their customer to have their food the way they need it. 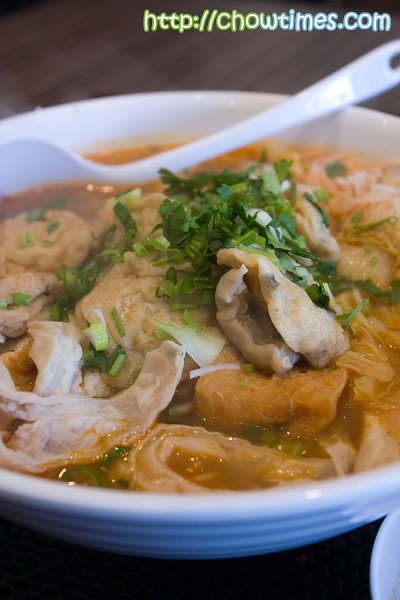 Suanne is getting smarter these days. You see, there is an unwritten rule that we cannot order the same food … this is because we are bloggers and we want to try as many different ones as possible. She used to end up with the short end of the stick after the boys and I get all the better ones first. Suanne is fast these days … she will “chop” the signature dishes before we even get the chance to say what we wanted.

So Suanne ended up with the Self-Pick Noodle Combo … which is just $7. I think it is a good deal. She had the Szechuan Spice Soup Base. I tried to influence her to get the Laksa Soup Base because I see a lot of other people having that. No deal, she said. For toppings, she had pork intestines and fish puffs. For noodles, she had rice noodles (I thought egg noodles is a better combination). Hot Milk Tea was her choice of beverage.

The bowl was big. Certainly more than enough for one person. The soup base was spicy and flavourful but the best thing is … 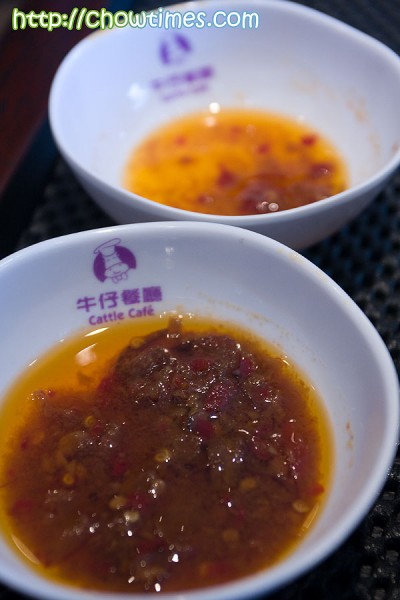 … their dried prawn chili sauce. They were great and had a lot of kick to it. Suanne likes it so much she asked for more … and then complained that its so hot she sweated all over. 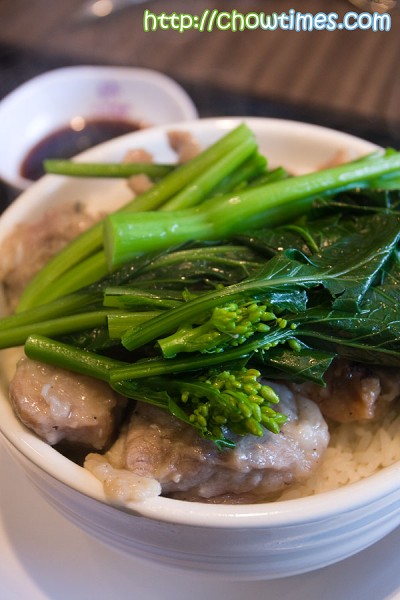 Poor Benny had to settle for second best. Well, I ended up with the Steamed Rice with Toppings Combo. This is also cheap at $6.25. I had the Spare Ribs in Black bean Sauce on rice.

It took a long while to come. From the looks of it, it seems like they took the trouble to steam the rice in the bowl before adding the topping. This makes the rice really nice, loose and drier … just perfect for pouring in the sweet soya sauce prior to eating. This actually reminded me of similar dishes in dim sum places but just that it came in larger lunch-size bowls.

The spare ribs were soft and tender. Very nice. 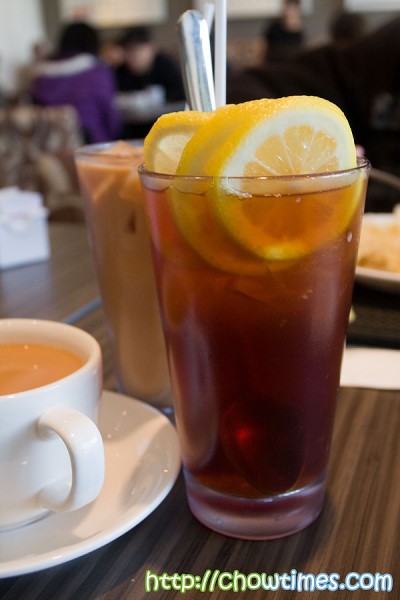 Like with all respectable Hongkong Style Cafes, beverage comes with the main dishes. Cold drinks is a dollar extra. 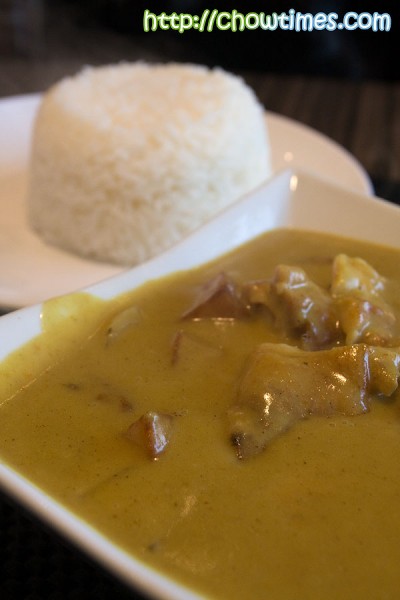 Arkensen had the Boneless Curry Chicken with Rice ($8.25). He got this simply because of the word “boneless”. Suanne and I tried to tell him that the better tasting meat is always those boned-in. He has a mind of his own these days … he just said OK, nodded his head and put on the earphones of his iPod. One day, he will know mum and dad is right … one day … just you watch.

There was lots of creamy sauce. I don’t like Hongkong Style curries … no kick at all. There were more potatoes than chicken from the looks of it. Suanne asked what Arkensen thinks of it. Without taking off his earphones, he just flashed a thumbs up. Yeah, he liked it. 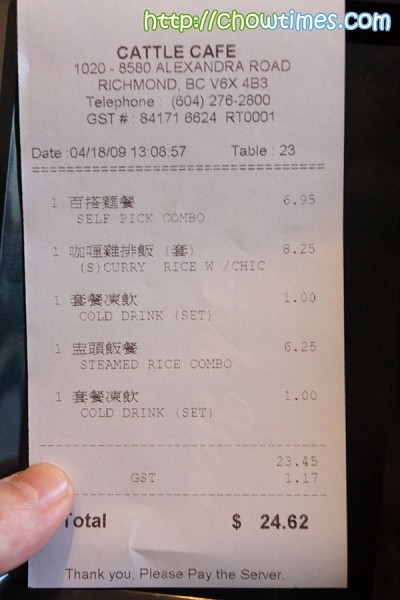 We were surprised when we got the bill. Just under $25 for the three of us. They take cash only.

It is good to know of another Hongkong Style Cafe in Richmond.

Specialty Chicken and Wonton House on No 3 Road and Ackroyd, Richmond

So Hot So Pot (a.k.a. Sohot Sopot) on Alexandra and Garden City, Richmond