Updated 11th Oct 2010: this restaurant is closed according to Urbanspoon.

Update 20-May-2009: Click HERE for our full review of Circa Resto Lounge.

Suanne and I were invited to a restaurant launch a week ago.  We enjoy going for these sort of events because we get to learn a lot.  Also, it gives the excuse to check out the restaurant scene in downtown. 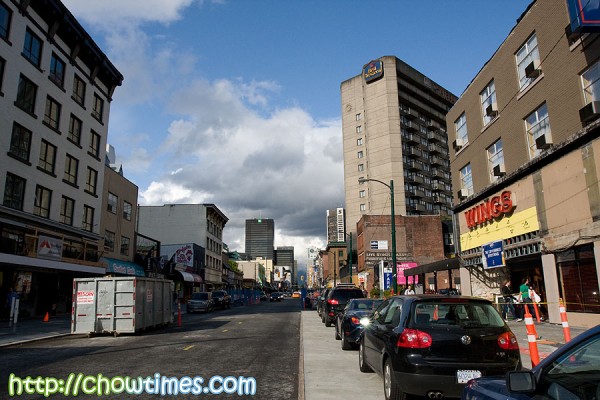 When Vancouver won the rights to host the Vancouver 2010 Winter Olympics, the area began a series of rejuvenation and gentrification.  The city embarked on a program to bring this street back to its former glory.  Last week, when Suanne and I walked down the street, we felt safe.  We can see that all the efforts of the City Hall is coming to fruition. 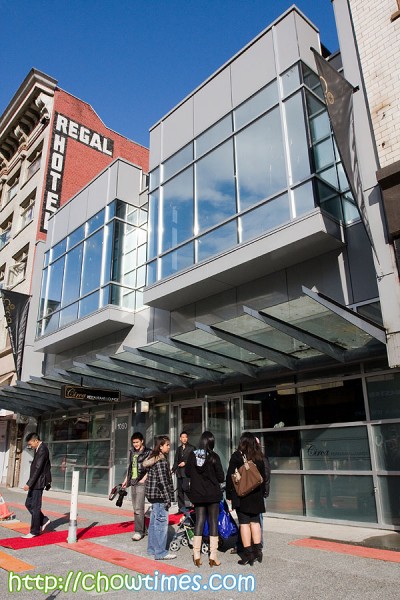 Circa Restaurant and Lounge is one of those businesses who are spearheading the gentrification of Granville Street north.  They were opened only to media on the first day.  He he he … Suanne and I really enjoyed it so much playing media.

We were met by Colette who brought us around the place.  We were quite impressed with the way the place had been setup.  They certainly had very clever ideas and has a corner or table for every sort of events.

We were particularly impressed with the private room — it was so simplistic and yet so elegant.  I was thinking that if I want to impress and entertain (business or otherwise), this private room would quite fit the bill.

From the outside, you won’t guess how big this place really is.  It has almost 200 seats in this area with over 50 seats on the upstairs area.  There are two bars (one for the upstairs).

Talking about bar, the event was sponsored by Absolut.  Too bad I am not too much of a drinker.  Being Asian (and I think I can speak on behalf of most Asian), I am somewhat intolerant to alcohol.  One glass, I am all flushed … two glasses, I talk nonsense … three glasses, I will break out in rashes which will last a week!

I had something I thought would be OK for me.  After all, it had Lychee Puree as it’s main ingredient.

There is the Chambord (or at least I think that’s what it is).

So … Absolut, SoHo, Chambord, Lychee Puree = Southeast Star.  Small glass but certainly too much alcohol for me!  My face were all red.  Suanne had raspberry juice instead.  She couldn’t stop looking at my face and remarking like every 2 minutes how flushed I was.

Circa served Amuse Bouche together with the drinks.  They were all very good.  The tuna had a crispy base, sauteed fennel with red peppers and tomatoes. 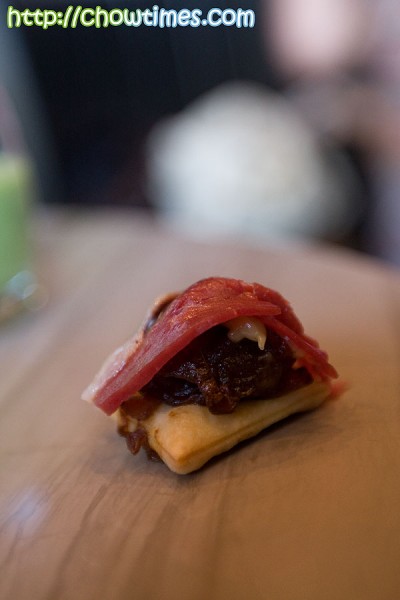 This is the Duck Onion Tart with prosciutto.

They even had soup … green cold soup is what they call it.  Made from potato and leek puree.

The Green bean were served with some meat cubes — consider this a salad.

And there was also the Cured Salmon with Tarragon Mayo.  We like this one a lot … except that it was kind of hard to eat …

… we noticed that almost everyone had the same problem.  Because it was top heavy, it almost always ended up flipping down the moment you pick it up.  LOL! 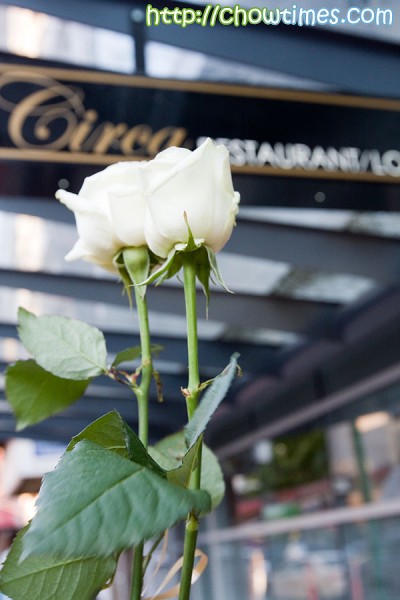 They gave Suanne two white roses as we were about to leave.  Oh yeah … Suanne cannot help but to remark (again) that my face was red  In the bright sunlight, it looked like I need to get to the hospital fast.

Circa is now opened to the public.  We are going to check it out one of these days.