Updated on 20th April 2010: This location is being closed.

This is a complementary meal from Tangthai.

OK, I admit.  I am still on vacation mode!  Suanne and I had a wonderful time the past three weeks in Spain on a Gastronomic Tour.  We will share with you some of the wonderful experiences we had … and YES! … we tried El Bulli’s molecular gastronomy food … finally!  More about that next week.

Just the day before we left for Spain, Suanne and I were invited to a new restaurant which belonged to a  friend of a dear  friend.  It was so new that it was just opened the week before our visit. 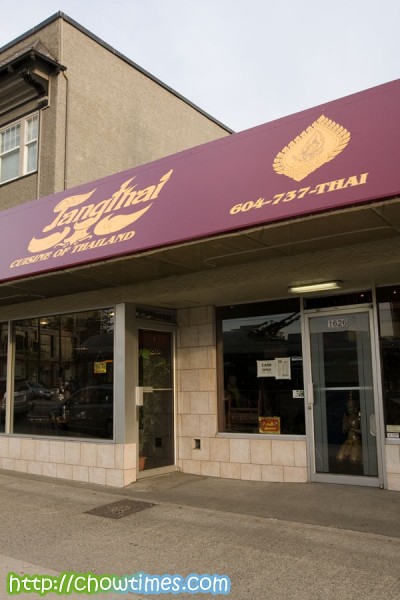 Tangthai is an offshoot of a very successful Thai restaurant in Edmonton called Padthai.  Tangthai is located on Broadway near the intersection with Fir.

Sonia is the person behind both Tangthai and Padthai.  When Sonia decided to open a restaurant in Vancouver, she wanted Tangthai to be the better version of Padthai. 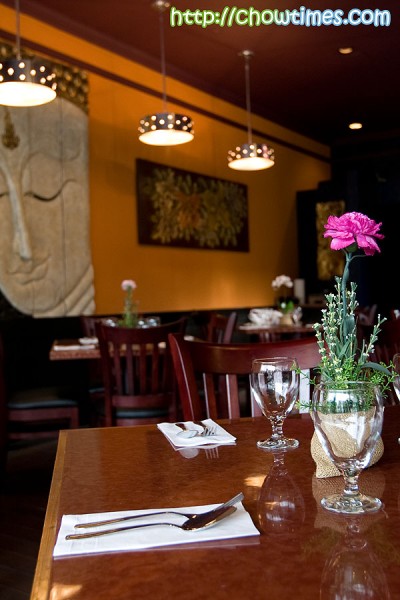 Suanne and I were quite awe by the decor and ambiance in the restaurant.  It was quite lavishly decorated with Thai art pieces … every single of which is hand picked by Sonia from Thailand.   Each of the woodwork art pieces are unique and one of the kind.

You can’t really see the carvings on the side of the table top from the picture above.  They were designed by Sonia who had them hand carved for Tangthai and shipped from Thailand.  There is no doubt that Sonia wanted Tangthai to project the authenticity of Thai culture and cuisine. 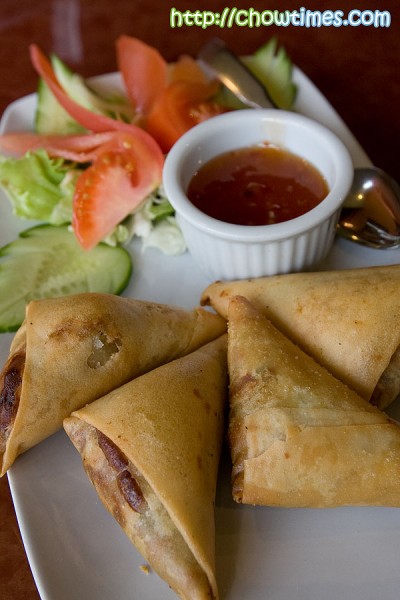 I must say we had a LOT of food!  Sonia wanted us to try as many dishes so much that we had to ask her to stop!

Sonia calls the appetizer above the Golden Triangle ($8).  It is an deep fried egg wrapping stuffed with minced chicken, green peas, potatoes and carrot.  The dipping sauce served is sweet chili sauce.  Tastewise, it reminds me a lot of the curry puff I used to have except that this has a crunchy crispy wrapper around it.  It was very nice as an appy. 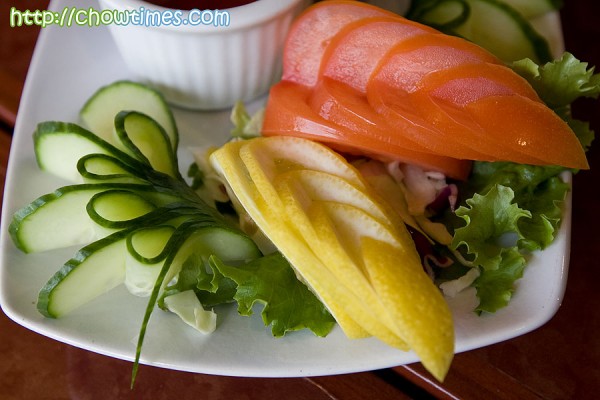 Sonia made sure that not only each of her dishes tastes good, it also had to look good.  Tangthai’s appetizers were all garnished with food carvings. 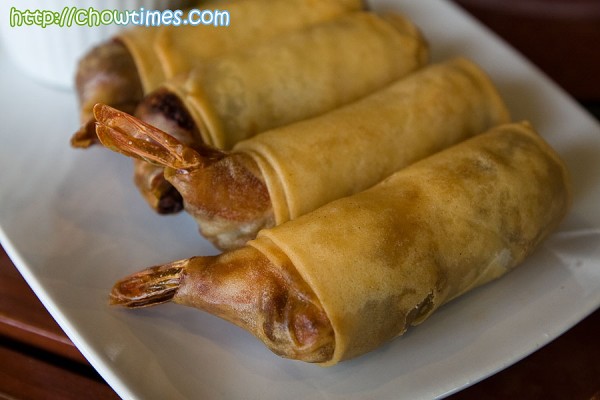 The other appetizers we had is called the Prawn Skirt ($9 for four).  It is like a high end spring roll except that they use better ingredients.  Stuffed with prawn, minced crab meat and water chestnut, it gives a very distinct texture.  We like this one a lot. 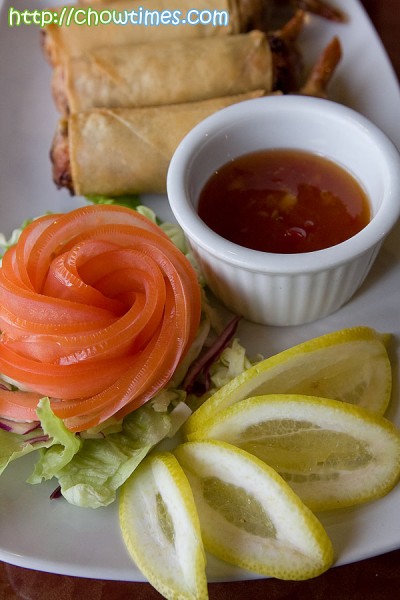 We met the man behind the carvings.  His name is Kandy and is the chief cook at Tangthai.  Kandy had won numerous fruit carving competition in Thailand.  As a matter of fact, he WAS the chief cook at Padthai in Edmonton until Sonia decided that Vancouver deserves the services of her best cook. 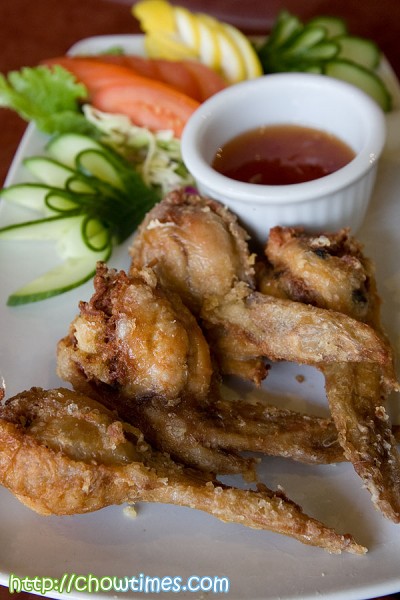 Even more appetizers!  You can imagine how full Suanne and I were just from the appetizers alone.  We would have normally ordered one appetizer and share it between the two of us.

The above is called Peck Kai Yud Sai (Stuffed Chicken Wings) which is $9 for four wings.  This type of chicken wings are very popular in Thailand.  The tricky part is how Kandy removes the bones and stuff the wings while keeping the skin intact. 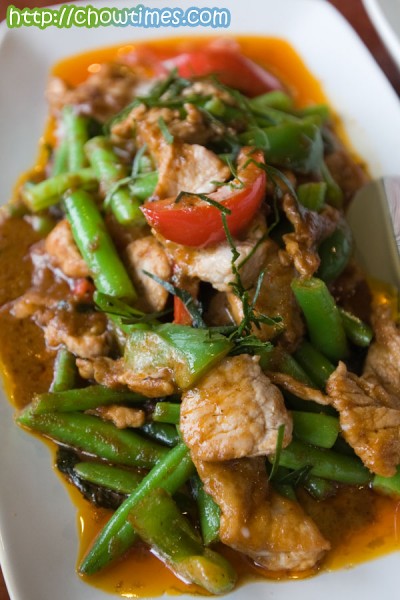 The Moo Pad Prik Gaeng (Pork with Curry, Coconut Milk and Vegetables) is $13.  This is a spicy hot dish and yet at the same time has a good balance of sweetness and saltiness.  We also like fresh crunchy vegetables that they use.  Sonia makes it a point to serve only fresh vegetables as she said everyone can taste the difference in fresh greens.

Speaking to Kandy (the Chief Cook), I can see how he takes personal pride in his dishes.  Sonia told us that everytime he sees a dish are returned to the kitchen not completely eaten, he keeps asking everyone what’s wrong with the food.  Well, we had a lot of food returned uneaten to the kitchen too … but it was not because it was not good (they were great) but it’s that he prepared way too much for Suanne and I! 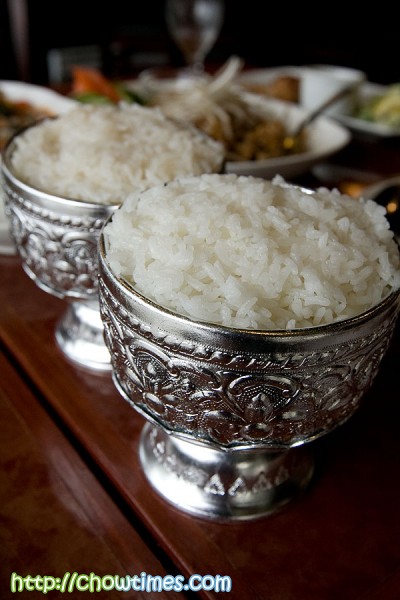 Tangthai’s steamed rice comes served in unique ceremonial bowls.  These bowls were commonly seen in Thai temples and are imported from Thailand.  Beware that the bowl are hot to the touch. 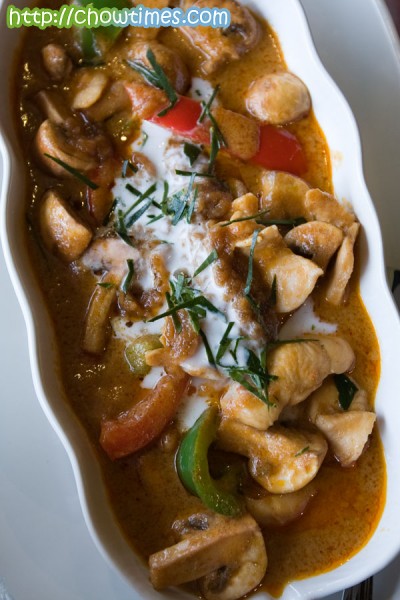 The Panang Kai (Panang Curry with Chicken) is $16.  This dish is characterized by a sweeter and milder type of curry.  This would be great for those who does not stand hot curry.  It’s creaminess is because it is made with coconut milk.  We did detect a strong lemon grass flavour here.

Tangthai uses the following classifications for spiciness in their menu: 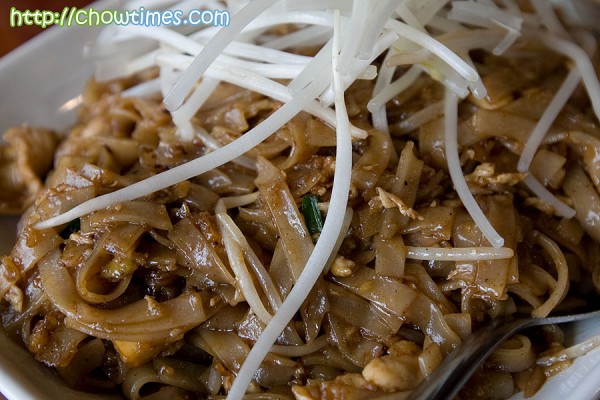 Someone did tell me once that a true test of a good Thai restaurant is how well they make their Pad Thai.  In Tangthai, their Pad Thai Krung Tep (Rice Noodle dish with a tamarind based sauce) is $12.  Although the picture above looks like it is greasy, it is not … it’s the sauce.  Frankly, we are not expert in Pad Thai but did thought that we would personally would like this to be a bit drier.  Crunched peanuts are served on the side in consideration of risks for people with allergy.

Sonia told us she tries to personally taste every dish perpared before it is served to the customer because she wants to make sure that they are consistently up to her expectations.  She also told us she would not hesitate to have dishes redone again even if it means wastages. 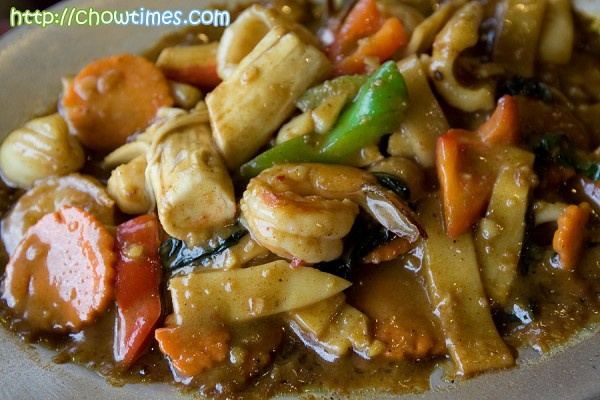 Sonia calls the dish above the Talay Duerd (Seafood fried with curry and vegetables) $16.  It is Sonia’s personal creation and is a very popular dish in Edmonton’s Padthai.  This has prawns, squid, artificial crab meat and scallop.  All the mains we tasted had very rich creamy sauces.  It is great but you will want to soak up the sauces with steamed rice. 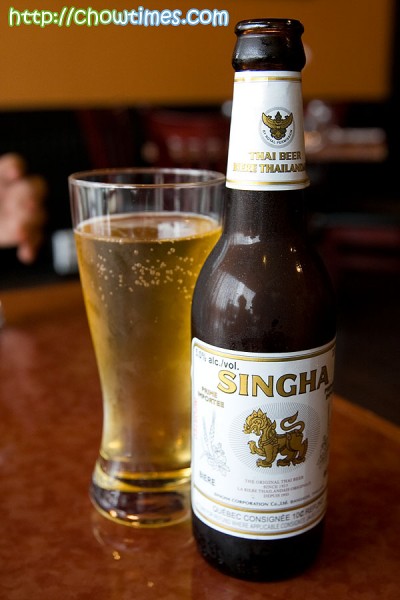 Tangthai has a selection of Thai beer too. We tried the Singha (pronounced Sing) beer.  Singha is the very first Thai branded beer and is also the most popular brand of beer in Thailand.

Sonia’s plan is to make Tangthai of Vancouver more successful as Padthai in Edmonton where there are always a lineup for tables.  We can clearly see that Sonia has poured all her best resources into making Tangthai a Thai restaurant with a difference.

It is kind of hard to judge, I admit, knowing that Sonia had put together a feast for Suanne and I.  Every dish we tasted were fabulous.  They were as authentic Thai as we know it.  I am sure if you go and check out Tangthai for yourself, you will see how much effort Tangthai puts in in making the restaurant a Thai restaurant with a difference.

You know … a good time to check them out is this Saturday.  With the impossibly hot weather the past few days, it would be a good idea to not cook at home but dine out before heading off to see the fireworks in English Bay.