Frank, my boss, came over to Vancouver a few weeks ago. The last time he flew in 5 months ago, we were wondering if he was coming to serve termination notices. That was because he did not state what his mission was. This time he came with a pre-announced agenda — he was here to conduct final interviews for more Project Managers. So no fears of losing our jobs anytime soon because all the projects is going to keep us busy for sometime. Good!

The last time Frank came, I brought him to Burgers Etc on Hastings. He absolutely loved that. He is not into fancy adventuresome Asian food which is a shame. I would have brought him to some memorable places. So I played safe and went to …

… Les Faux Bourgeois. It’s so hard to spell that Bourgeois word, not to mention pronouncing it!

I think it is pronounced as lay-foo bow-zu-ar … something like that.

And I think it is French for The Fake Middle Class.

For a French restaurant, Les Faux Bourgeois is located in an unlikeliest of places. For directions, I would say that it is at the intersection of Kingsway and Fraser but technically it is on 15th and Fraser. The place has a rustic feel with original structural details. This creates a certain charm which makes Les Faux different from other French Bistros.

Les Faux Bourgeois is perpetually booked solid. I used to make reservation on a Monday for a Friday and they would tell me they do not have tables anymore. I was lucky that day. It was a Thursday when I called at noon and they told me that’s the last table they have for the day. If you think of walking in, I don’t think its a good idea.

There was three of us. Gage joined us. He is not too much of an adventrous eater from what I see. He always has this big bowl of salad which he mix in the office.

We called a few drinks hoping to just relax after a few hectic days. And then we had to be told by our waiter that we have to leave by 7PM. He said that was the condition that they told us when they took my reservation. I did not recall being told that. We made no fuss over this but I thought I should let you know. I think they want to turn the tables fast.

I had the Corona. It is a Mexican beer, nothing French about it. What is this thing about the wedge of lemon on Coronas anyway? Is it a branding kind of thing for Corona? I don’t see this done for any other pale lagers. Is there a story behind this?

The bread came. It was absolutely marvelous. It is especially so when you see this … 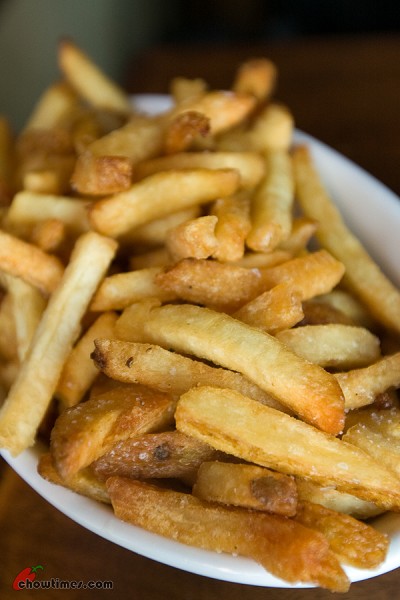 We also had some fries before ordering real food. Americans love fries. Les Faux Bourbeois does very decent fries. Although they are really crispy, they are small cuts. 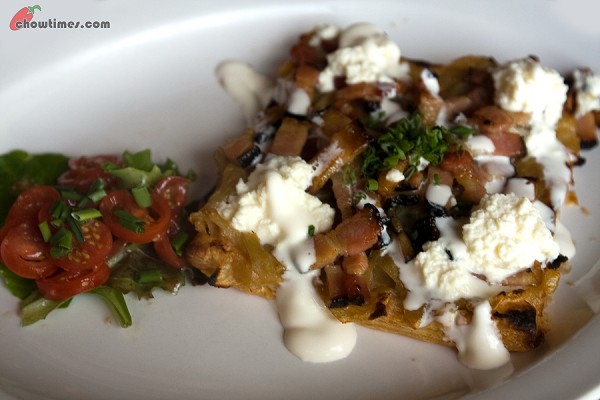 You know, this meal was so many weeks ago and the fact that we were talking work most of the time, I can’t remember this dish anymore. It looks like some kind of flatbread with goat cheese?

One thing I noticed, the dish names on the menu at Les Faux Bourgeois is in French. So for someone who doesn’t read French like Frank and I, it took us a while to read the menu. They have daily specials on the chalkboard by the bar … that is even worse because it is most written in French names. At least on the menu there are descriptions.

If I am not mistaken, Gage got this. Escargot … snails. I am kind of surprised that he even tried this. As I said, I never thought that he was much into exotic food like this. The sauce does look good, doesn’t it? 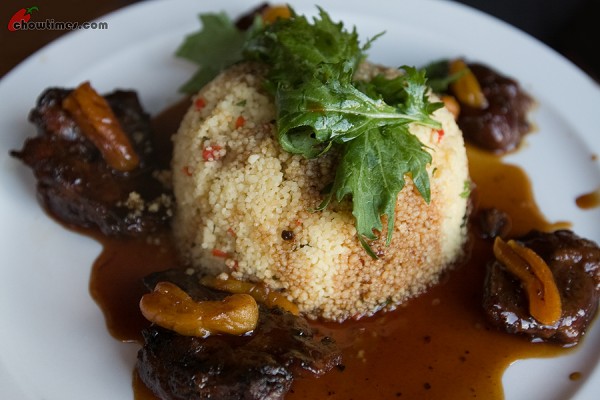 He also had Couscous. He asked me what couscous is. For all I know it is some grainy stuff which looks like broken, undercooked rice. There was a big mound of couscous with a few tiny pieces of beef (I think). 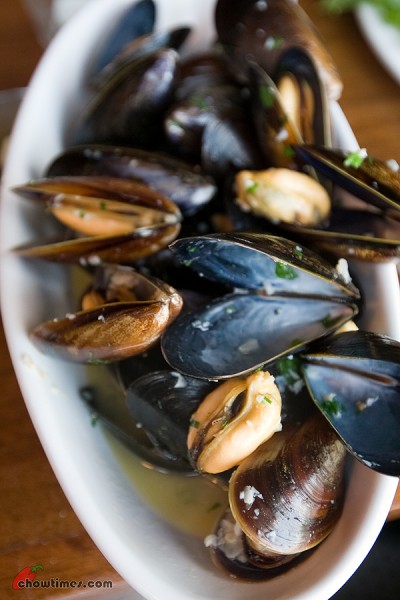 I had mussels. It was quite OK. Not great.

The bestest mussels I ever had was in Chambar (see my experience here). 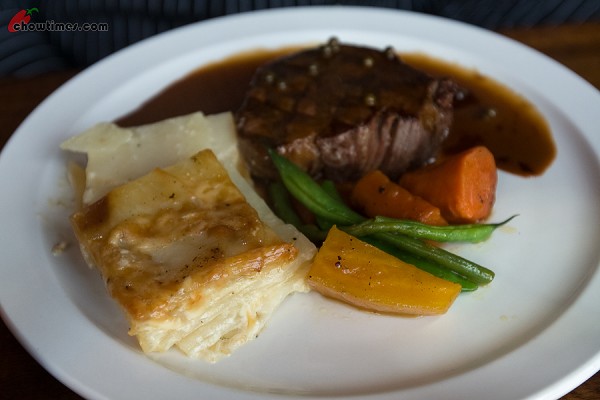 Frank was a disappointment … he went for the steak. Americans!

I certainly enjoyed this meal at Les Faux Bourgeois. Frank and Gage did too. They both thought it was an excellent choice. I think for an “internal” no-frills business dinner where you are not entertaining customers, Les Faux Bourgeios is an excellent place to bring visitors.

You just need to make sure you make reservations in advance.