Nanzaro loves camping. He signs up for every camp that he comes across. I don’t think he is bothered with what the camp is just as long as he goes camping. It could be leadership, survival, physical education, flying … anything. So over this long Thanksgiving weekend he was off again to another camp.

He needs to be at the Vancouver Meeting Point at 8:30AM. So we thought for once we take that long drive to Vancouver and have our breakfast before dropping him off. 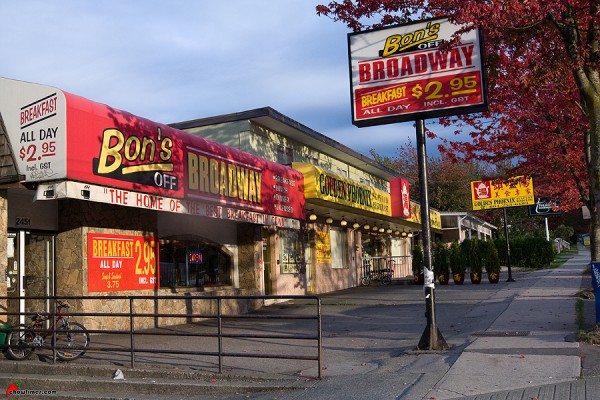 I have heard so much about Bon’s off Broadway and of their $2.95 Breakfast which includes GST. I can’t think of any breakfast cheaper than Bon’s in Metro Vancouver other than IKEA’s $1 breakfast.

We planned to wake up extra early and be there at their opening time of 7AM. When we got there, we found out that they only open at 8AM on weekends. Well, there was no way we could have breakfast and then drive to Nanzaro’s drop off point on time. So, I suggested that we take him to breakfast in McDonalds or something, drop him off at the meeting point and then the rest of the family return for the breakfast in Bon’s. 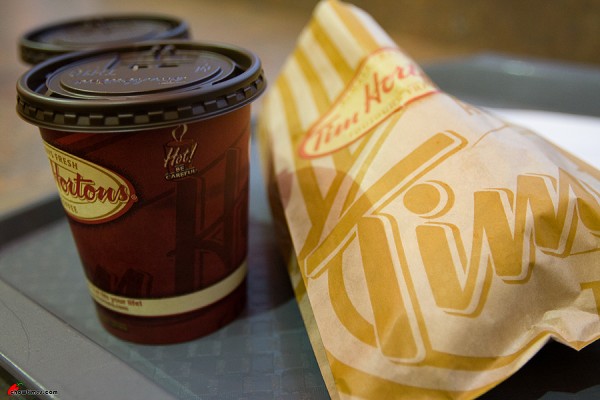 Understandably, Nanzaro was upset because he was looking forward to the breakfast here. I had hyped it up the night before and shown him some pictures on the web.

So we ended up going to a nearby Tim Horton’s and got him a breakfast sandwich. And he insisted on having COFFEE to go with the sandwich, not hot chocolate. No siree. He is not going to take no for an answer because he was still fuming mad about not getting to eat at Bon’s. So we let him — that was about the only way to make it up to him.

We dropped him off. The moment he sees his friends, the whole issue was all behind him. LOL!
View Larger Map

Bon’s Off Broadway is located at the north intersection with Nanaimo. It is easy to locate, just look for the bright red sign and awning. 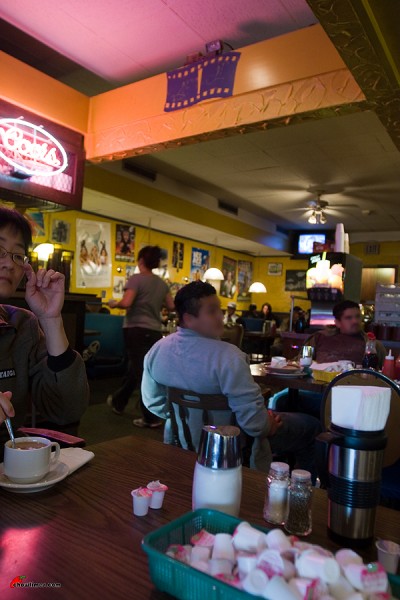 We got back to Bon’s at 10 minutes past their opening time, so there were some tables open. “Anywhere!” someone shouted the moment we walked in. So we grabbed one of the remaining three tables available. Our waiter asked if we wanted the menu. I guess most of the customers are regulars and therefore do not need a menu. We need it for sure.

Bon’s off Broadway is obviously a neighborhood restaurant. You really don’t need to dress up eating here. It is very casual and nothing pretentious. The decor is garish … with neon lights in odd places and old movie posters slapped all over the wall. No frills. We like the casualness. 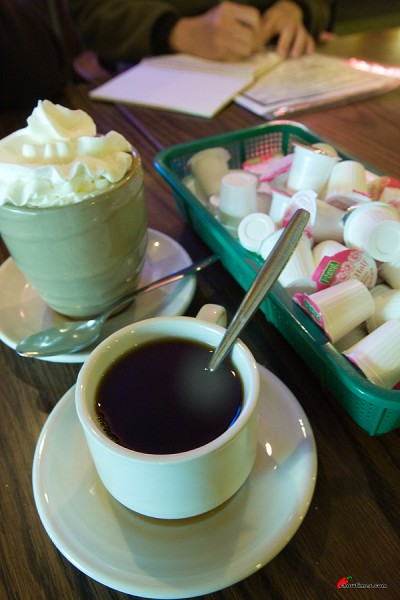 We had coffee and hot chocolate. The are free refills but you should not expect them to come by your table regularly to fill it up for you. They are just too busy to do that even though they did fill it once for us. Many people just helped themselves with the refill. Truth be told, their coffee was nothing to shout about. 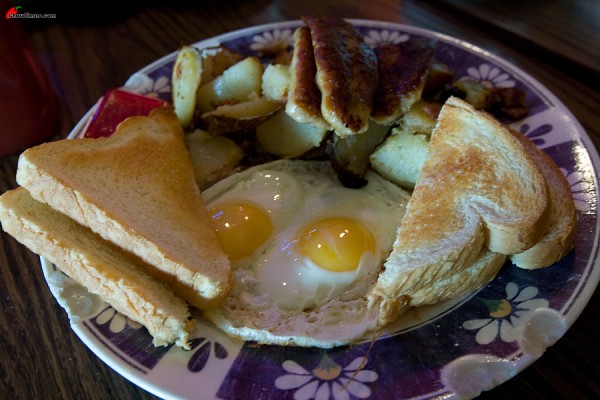 One would have thought that a $2.95 (including taxes!) breakfast would be just plain toasts and eggs but this is a full-on substantial breakfast served on a large plate.  Just look at that picture above. The only thing you should overlook is the fact that the plate is all greasy and that it is chipped — not one but in several places. LOL!

Service is slow. Our orders took over 30 minutes to arrive. We were OK with that because we had read reviews about this issue. To their defence, it is not that Bon’s service is slow but it’s just that there are a lot of tables to serve and breakfasts to prepare. 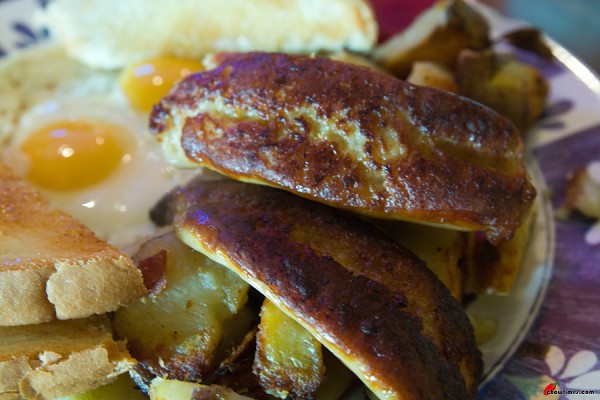 I got the sausage. The shape doesn’t look like the sausage that one would expect. The sausage was OK … just OK. At least this one has taste even though I find it a bit too salty for my liking. 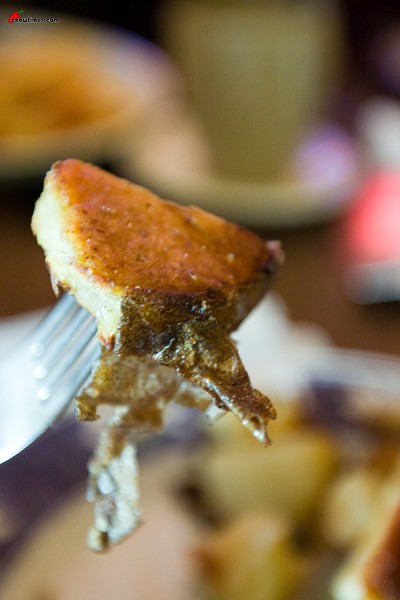 Their home fries was awesome. The potatoes are chunked and unpeeled with skin on. I normally have ketchup with fries but with this, they are great as it is. 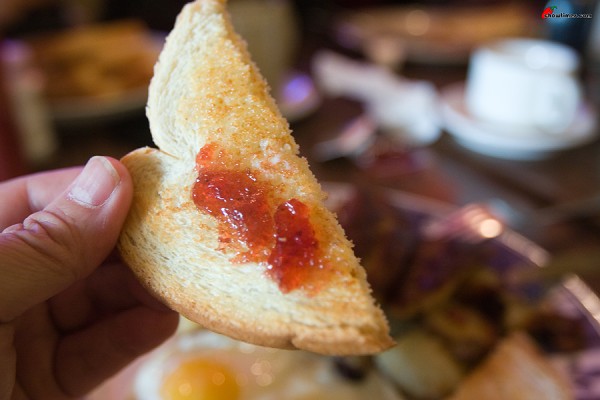 The toast was good too. It was toasted crisp with a tad bit of grease. So even for $2.95, they did not cut corners. This is a real delicious breakfast. I find that Bon’s $2.95 breakfast could easily put breakfasts from Denny’s and IHOP to shame in terms of satisfaction and most definitely price.

I would even venture to recommend that even it means you having to drive all the way here, you should at least do it once and check out Bon’s $2.95 Breakfast. 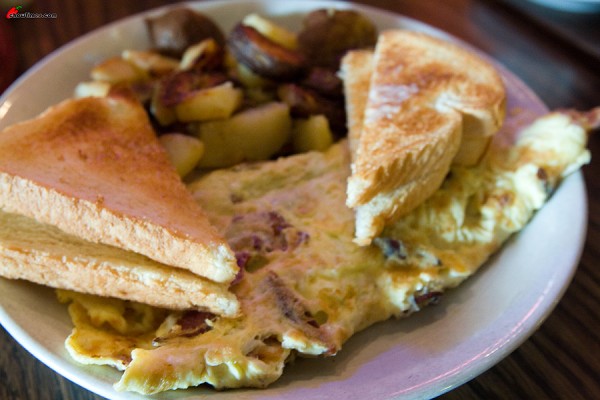 Arkensen ordered the Bacon Omelette. This one is $7 which is more like normal prices, unlike the ridiculously cheap $2.95 Breakfast. Arkensen enjoyed this. Since Suanne could not steal the toast from my breakfast, she swiped them from Arkensen’s plate. 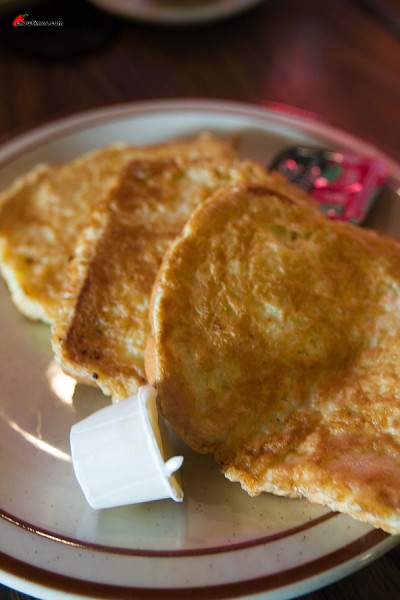 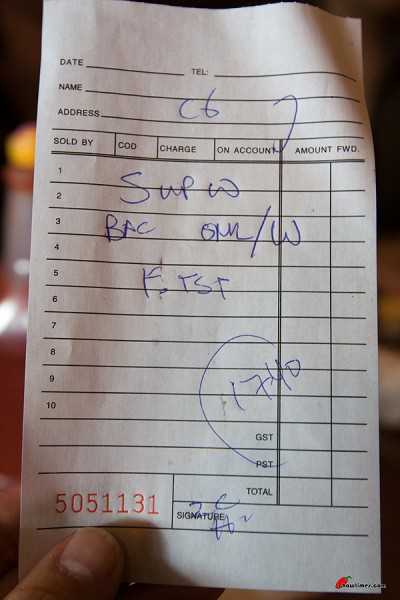 The total bill came up to just $17.40 before tips. This is a no frills restaurant famed for their $2.95 breakfast. You should come without expecting too much in terms of table service and such.

We can see now why Bon’s off Broadway is popular the way it is. We will definitely come back again even if it means driving almost 30km from Richmond. We will make it up to Nanzaro.

My Chau on Kingsway, Vancouver