I still do not quite get it. When you use Twitter, do you say that you Tweet or you Twit?

I am not sure if you know that we are on Twitter. You can reach us at @chowtimes if you want to follow us.

Anyway, this post is about my first food blogger meet organized via Twitter. @604foodtography sent a twitter to @tibbidy, @edlau and myself asking if we wanted to have a quick bite at La Taqueria. @seasaltwithfood picked up our tweet and decided to join us as she was already in downtown. Unfortunately, @tibbidy pulled out at the last minute … saying that she had to deal with this thingy called work.

La Taqueria is located on West Hastings and Hamilton in downtown Vancouver.

I had never walked along this stretch of the road before. So it was a surprise when @604foodtography pointed to me that La Taqueria is located just across the street from Marc Emery‘s headquarters (Marc Emery is known as the Prince of Pot in Canada) and next door to Vancouver Seeds Bank (which sells Marijuana seeds for medicinal purposes). 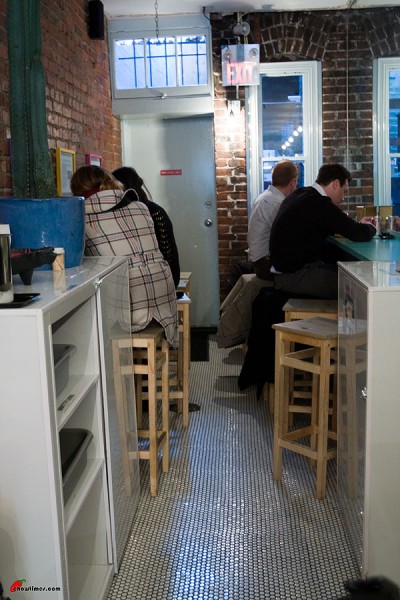 La Taqueria is really small. At best, I think they have stools for only 12 people. People either wait for a table or like many people do, they take away. Waiting for a table is not a problem because it doesn’t take long to gobble down 4 small tacos anyway.

@foodtography knows this place very well. He had been here several times already. He said that at times there are lines that goes right out to the door. But on that day, it wasn’t too bad. We even managed to get the counter seats — all four of us. All four of us who were armed with hefty SLR cameras!

The menu is really small and simple. Even that it was bewildering for me who is not familiar with Mexican food and names. But it is easy once you read the description in English underneath the Mexican names. You can click on the picture above to show a bigger image to read the menu if you want.

So there are about a dozen types with something for everyone … beef, chicken, fish, vegetarian, vegan and even the more exotic ones like cow tongue. 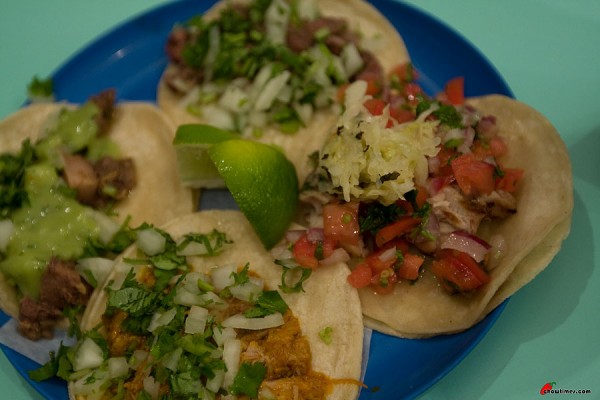 So like everyone else, I ordered four. What I had was the … following:

In user-friendly English it is:

To sound like I know a lot of Mexican it is: 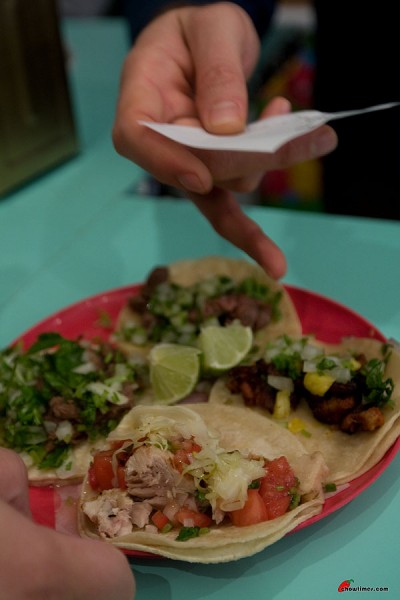 So I said we had SLRs right? And that we sat by the counter? Needless to say, we got a bit of their attention. They even came and pointed to ONE of us each individual item on the plate. That ONE person is the one with the biggest camera, the Canon 1D. I drool over that camera. I would have bought that camera but the problem actually is Suanne.

The Tacos was super delicious — everyone of them. Frankly, I can’t even remember what each taco was as I ate them.

All the tacos were served with cilantro, chopped onion and lime. La Taqueria also claim that their tacos are natural, free-range meats, organic produce and wild, sustainable fish and locally sourced. 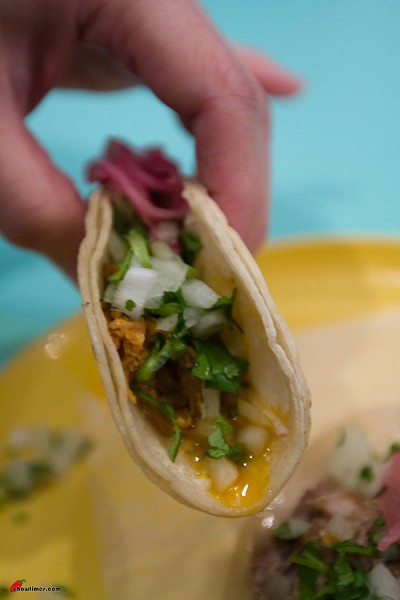 I don’t know about you but for me the design of the tacos has made it to be the most difficult thing to eat in the world. The juices were dripping down my hands. Each time I take a bite on one end, the stuff falls off the other end. And to add to that I just had to tilt my head like 90° to eat it.

Anyway, did you notice that the tacos above came in two layers? @foodtography said the way to eat it is to separate the two tortillas and spread the filling equally between them. That guy is a genius I tell you. While we had four tacos, he had eight for the same price. LOL!

The above is @seasaltwithfood’s. I am not sure what it is but it’s some vegetarian version with some sour cream thingy. And she just had one.

If you want extra kick, there are extra sauces, jalapeno and pickled red onions.

I expect more from the Habanero sauce. No kick at all. Maybe they water this down for the locals. 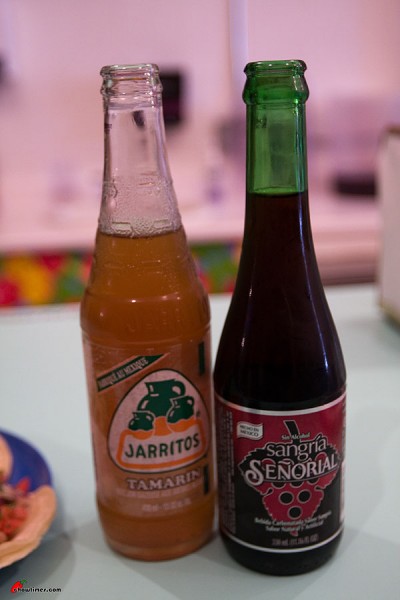 For drinks, they have Mexican soft drinks. I still remember the Jarritos from our meal at El Mariachi. Jarritos is the Coca Cola of Mexico as I understand it.

The darker bottle (Sangria Senorial) is the non-alcoholic version of Sangria. I did not have that and so I don’t know what it tastes like. I think it is just grape juice.

Well, a couple of days later I brought Suanne back to La Taqueria because I wanted her to try it too. So we got a couple for her. This time it was my turn to be the genius … we ordered two, split it up to make four.

The tacos was really good. But I do think they really make a lot of money selling this. Gosh … $2.50 for just a piece of tortilla, some meat and chopped vegetables. I am just curious … how much will such tacos sell for in Mexico — anyone?