When we had to deal with -7 °C temperatures last week, the rest of Canada was laughing at us whiners in Vancouver. Much of Canada was way colder with some cities at -30 °C. Whether it is -30 °C or -7 °C, it is freezing. To think of it, it is still not winter yet.

It was supposed to have some flurries last night — it didn’t. We have everything primed for snowfall except for one small detail, moisture.

One thing came to our mind each time we encounter freezing weather. At this time of the year, Suanne will agree to anything that has hot soup. I have a feeling that for the next few months, we are going to have blog posts of Pho, Ramen, Hot Pots and such.

It was Suanne’s choice to have Ramen. She likes Ramen a lot. We had been to Kintaro which claimed to have the best ramen in North America. It was good but Suanne does not like the lines, the small outlet and the rush you feel eating there. I understand. You can’t really slurp each bite of the ramen at your leisure there when there are people milling around waiting for a table.

This time we went to Menya which is located at the corner of Broadway and Yukon.

Menya is very Japanese. The moment we walked in, we were greeted enthusiastically in Japanese. That is one of many aspects of the Japanese culture we admire so much. Despite so much similarity to the Chinese culture, sometimes I wonder why in the area of restaurant service it is like night and day. The difference is so stark that I think I would be stunned if I get that kind of greeting and service in a Chinese restaurant of this size.

Menya has that rustic feel to it. The chairs are made of tree stumps. I am beginning to notice that tables too. I think I see this in several Japanese restaurants before. They have a little drawer underneath it and a hook by the side. Suanne and I figured that this is a common feature in Japanese restaurant tables where space is a premium and as such the drawer is a practical way save real estate on the table top. As for hooks, it is too low for jackets for sure. We think it is to hang ladies handbags. Are we right?

The menu is small and simple. It is just a 1 pager with seven choices of ramen. On tip though, pay attention to the Specials written on chalk board. Every now and then they have something new not on the menu.

That’s what I did. I ordered the Tan-Tan Men off the chalk board. This is $8.50. It is cooked in pork broth with spicy red chili oil. It is more spicy than it looks. One would normally associate spiciness with red. It is topped with ground pork and vegetables.

Taste-wise, it is dominated by the sesame paste. The soup is rich which is alright but we both did not think it is something we would order next time round. It is just too rich and too much sesame paste that we personally do not quite like.

I should have gone with my initial choice of Menya Shoyu Ramen.

Suanne went with the safer choice. She had …

Suanne had what is known as the Nagahama Ramen ($6.75). This is the first item on the menu and so it should be their better ones. It is described as authentic Tonkotsu Ramen pork bone soup with Menya’s special soy sauce seasoning.

The rich cloudy broth is made by boiling pork bones for many hours which gives it a consistency much like melted butter or milk. That is why it is not common to have this made at home. The broth here does look thicker than those we had elsewhere.

In the broth are some pickled ginger, black fungus and bamboo shoot.

The sliced pork is perfect with nice balance of fat and meat.

Suanne and I normally share our food. We have this thing that we exchange our food half way. She took a sip of my broth and unilaterally decide that she is keeping her ramen this time.

Their soup is good. We thought it was kind of funny when we overheard this lady customer who came in asking if they sell just the soup. She also asked if they use MSG in the soup to which the waitress said “just a little bit”. I think that lady customer is on a diet or something but she just can’t resist the pork bone soup.

Suanne asked for special with her ramen. For $3.40 extra she got gyozas and a rice ball.

The above is called the Yamagata Rice Ball. We were told that this is made from one of the highest grade of rice in Japan. We find the taste a little too bland but the texture and firmness of the rice is executed well.

The Gyoza is small and tasty. It is pan-fried on one side to a nice crispy skin which the other side is steamed. It was moist with juices under the skin. One thing that stands out is its small size. 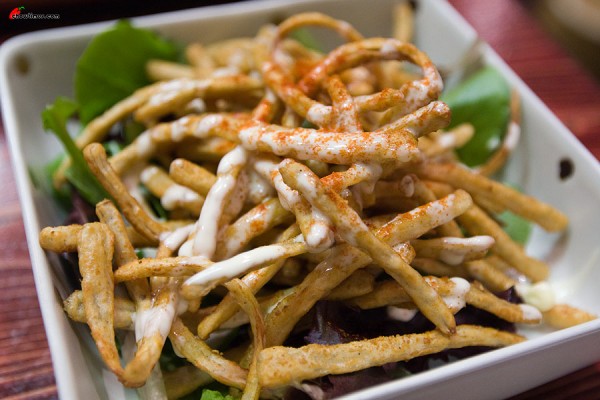 Burdock. Every heard of it before?

We saw that this was a special on their chalkboard too. We asked our waitress what is burdock. She hesitated for a while and said with a polite smile, “Burdock is … burdock”. LOL! I guess it is hard to explain but we got it anyway to try. The waitress told us that they have this as a special for dinner for the past 1 month and it may or may not be a long term item on their menu.

At a glance it looked like fries, doesn’t it? It is a root vegetable popular in Japan. Its texture is chewy and crunchy and has a low pungent flavour. They dressed the burdock in yogurt dressing.

Menya is good. We enjoyed ourselves a lot. Only regret is I should have ordered the more traditional ramen. But then if I never tried the Tan-Tan Men, I would never know, right?

Let’s contrast Vancouver’s Menya with the more famous Menya Mushasi in Shinjuku, Tokyo. I don’t think our Menya is related to this legendary place in Tokyo. That is one Ramen shop Suanne and I want to visit someday.