Updated on 13th Sep 2010: This restaurant is closed according to Urbanspoon.

This is the last post where we will say “we were there after dropping off/before picking up our boys from their secret Olympic rehearsals”. All the rehearsals actually gave us the chance to eat at a place where we normally do not go to.

Their last practice was the day before the closing ceremony where it stretches until past 10PM. The organizers provided them food (sandwiches and subs) and so Suanne and I decided to go eat before picking them up. 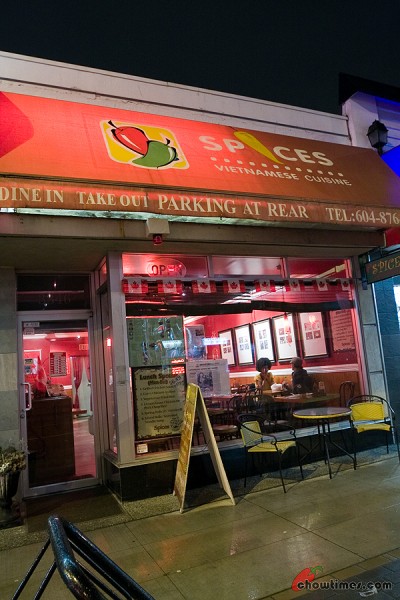 After cross checking our to-try list, we decided to go to Spices on Cambie. Ever since Thien Kim (where we tried 4 different soup noodles and none of them are phos) and Song Huong (7 courses of Beef), we had been trying to see what else Vietnamese offer in their cuisine other than Pho. We like pho, but we had so many of them it is less of an adventure eating them these days.

Spices fit the bill. While Spices also has the usual Vietnamese fare like noodle soups, sandwiches and brochettes, they also have a few specialties of their own. 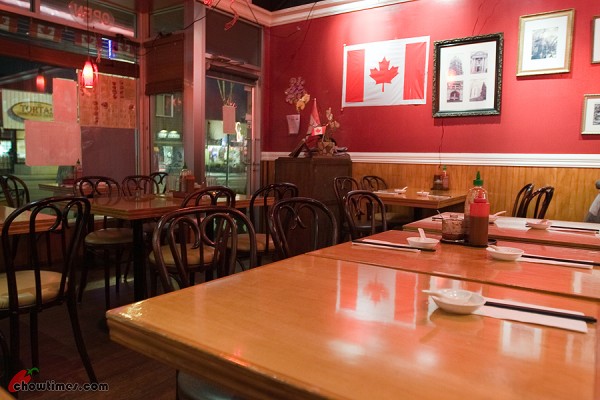 Spices is a reasonably sized restaurant. Unlike the bright interiors of most Vietnamese restaurants, this place a bit dim. The red and wood paneled walls gave it that reddish hue. The walls were decorated with interesting black and white photos of life and architecture of Vietnam.

It was a pretty busy night at the restaurant. Even though you don’t see any of the tables above taken, I took that picture way past 9PM where most of their customers had just left.

We observed that we were the only Asian customers here which we initially thought that perhaps Spices will westernize their food to suit non-Asian customers. And then we heard the workers speaking to each other in Cantonese too. We were so wrong. 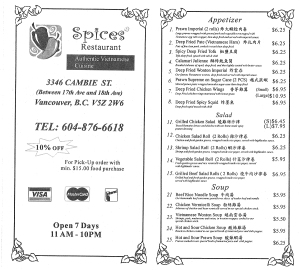 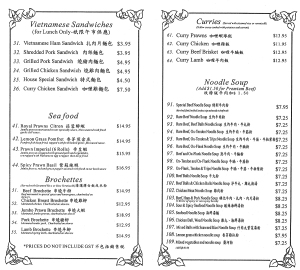 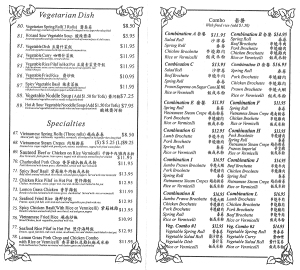 So we first ask the waitress if this is authentic Vietnamese cuisine they have here, pointing to some of the items which I had never come across before. She vehemently said that their cook is Vietnamese. We took that at face value.

Look at the last page of the menu above where there is a page on combos ($12-$17) you can order if you want to try a few of their dishes. We wanted to order from it but it is too “limiting”. It is also too little if we order one combo to share but too much if we order two. 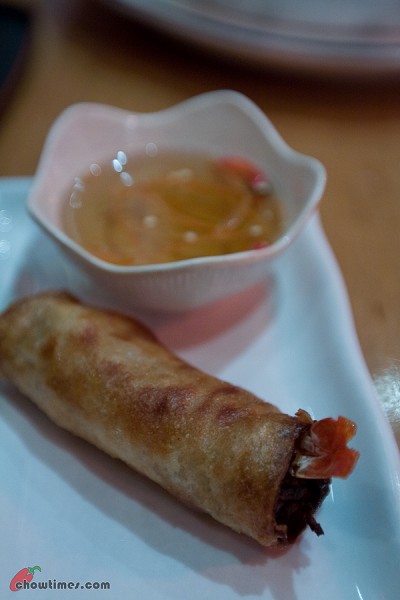 So we ordered Prawn Imperial as an appetizer. We had just one piece to try which is $3.50. The appetizer size option is two pieces for $6.25. 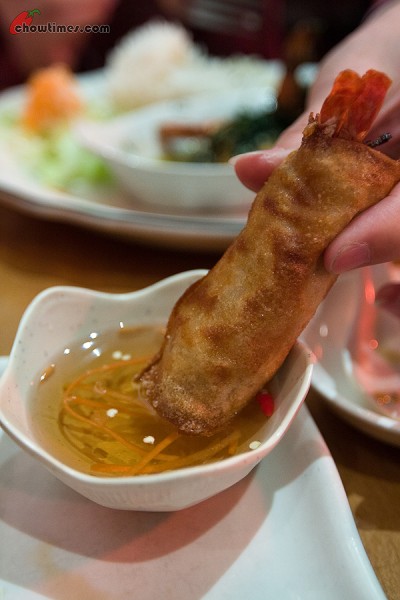 It deserves the Imperial name. It has a large prawn wrapped with ground pork and vegetables and then re-wrapped with Vietnamese egg roll wrapper. It is deep fried and served with what they call the Imperial sauce. We can’t really pick out why this seemingly normal fish sauce tasted good and different.

It was quite a meaty spring roll and the wrapper was crunchy as expected. Wished we had ordered two instead. 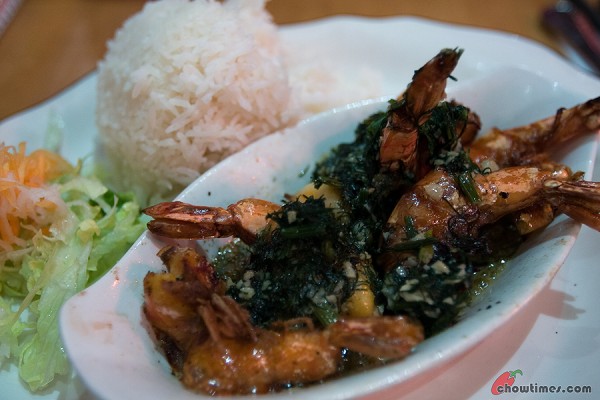 Suanne wanted to order a lighter baguette but was told that it was only for lunch. Not wanted to scour the menu again, we asked the waitress what is their most popular dish. She rattled off four dishes but the first one caught our attention … the Royal Prawn Citron.

This, to us, is the OMG dish of the night. It is pricey ($15) but worth it. The dish is filled with jumbo prawns which are marinated in a “special sauce” and then sauteed with fresh garlic dill sauce.

When it was brought to the table, it was sizzling hot which drew a lot of attention from our neighboring table. It just smell heavenly and we were quite pleased with the choice.

The prawns were fat succulent ones with brittle shells. A little more crunchier would have been 100% perfect. I just like to eat the prawns with the shells. 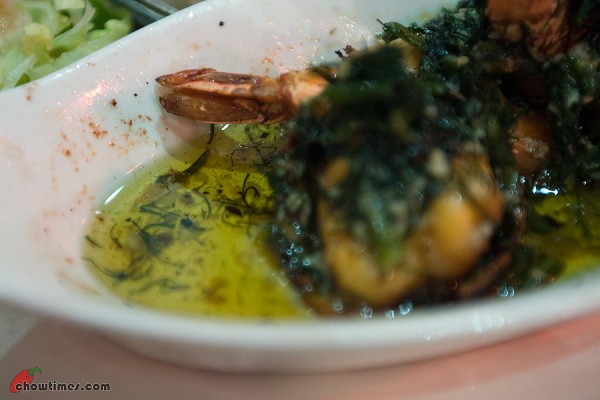 The dills too were great with rice. It is not often (if at all) I see dill done this way before. Now … the best part is the … sauce. Simple melted butter. 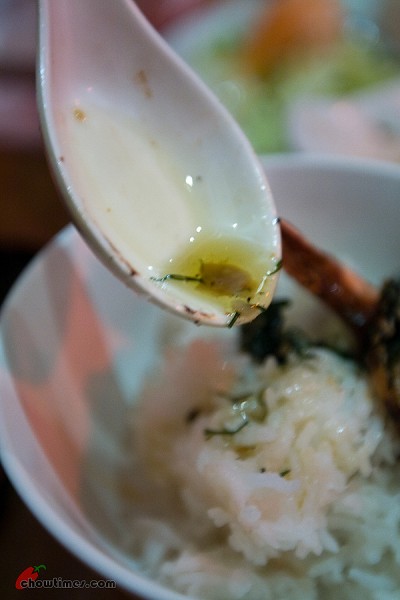 There was not a lot of the butter sauce and it is difficult to scoop it up with fat soup spoons. But it was just good enough to drizzle some of the goodness onto the rice. I could eat this alone, even without the prawns. 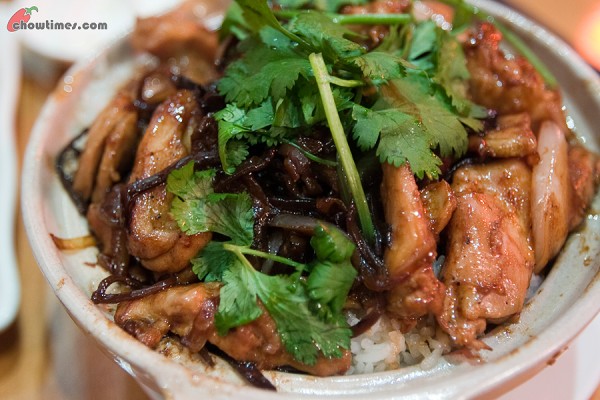 My one was good although not as good as Suanne’s. This is called Chicken Rice Pilaf in Hot Pot ($13).

I wasn’t sure if this is Vietnamese because I had never seen or heard of hot pots in Vietnamese cuisine. I need Vietnamese experts out there to tell me.

I don’t know why they call this rice pilaf too. In my mind, rice pilaf is rice browned in oil and then seasoned with broth giving it a flavour in an otherwise bland rice. The rice here looked normal although Suanne say that she tasted chicken stock in this.

But this hot pot (should be called claypot) rice is superb. Firstly, the chicken was moist and blends really well with mushrooms, sauteed onions, and ginger root. The best part is the  charred crispy rice at the bottom of the claypot.

It is served with fish sauce which gives it another dimension to the taste.

You gotta try this. 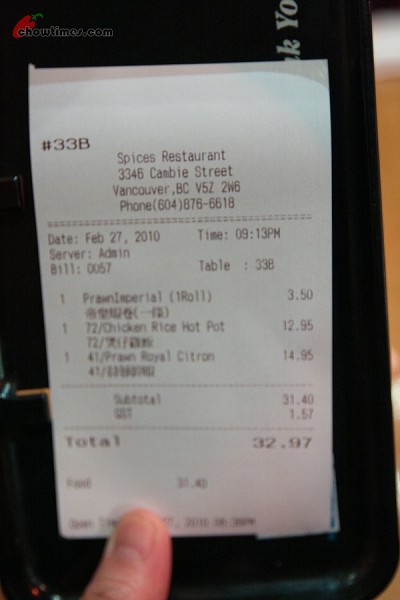 You just gotta try this.

Come to Spices and ignore their Pho. Check out their “Imperial” and “Royal” dishes … and also the section of dishes under “Specialties”. I think you will be delighted with it.

The prices are quite reasonable for the quality and serving size … although it does not quite measure up to the prices of most Vietnamese restaurants.