This should get you all excited.

This restaurant is the newly opened restaurant by the same people behind Lao Shan Dong.

Last week on the way home, I was walking past Lao Shan Dong when I saw a notice pasted at the door (above). Apparently, The One Restaurant is owned by Lao Shan Dong. I would not have visited if not for that sign. We knew that if The One has food half as good as Lao Shan Dong, this is going to be one successful restaurant in no time.

So Suanne and I immediately changed our Friday date plans to check out The One.

The One is located on Kingsway near the intersection with Imperial. It is just across the street of Pho Hong which we blogged about recently. There are ample parking spaces in the small strip mall it was on. But I do think that given the size of The One restaurant, it will be a challenge if they do have full house.

True to the theme outside, the interior is also adorned with tables and chairs in the clashing colors of black and red. The seats are plush but I do find some of them a bit small even for someone my size.

The interior is modern and spacious. It is also bright because of the ceiling to wall glass frontage on two sides of the restaurant. This is a refreshing difference from Lao Shan Dong which is always packed and cramped with nary a decor inside.

Nicole said that The One is upscale and indeed for a Taiwanese restaurant the likes of No 1, Beefy Beef, Corner 23 and others, this is definitely more upscale than them.

The One is opened for lunch and opened till late (to 2AM during weekends and 1AM on other nights). 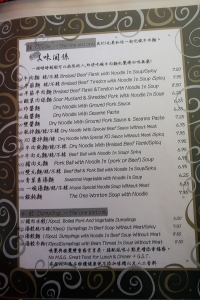 The One is a Taiwanese Cuisine restaurant. So you get the same type of food you normally find in Taiwanese restaurants.

The menu is more extensive than the 3 pager above. I did not take more pictures because … well … I was afraid. I was afraid that they think we are spies from the competitors. So I only managed to take pictures of 3 pages. What I can tell you is that the menu is broken into sections of the following:

On every page of the menu are the words “No MSG” … and that is good.

We did not get the TBN (short for Taiwanese Beef Noodles for the uninitiated) because we wanted to try their other stuff. But we did notice that they offer both the Beef Noodle Soup for $7.50 and also just the beef soup (no noodles) for the same price. I asked our waitress if the beef soup is more if don’t want the noodles. She sheepishly said you don’t get much more beef. She was honest.

Like all TBN places, they also have lot of drinks options … milk tea, bubble tea, coffee, fresh juice, herbal tea and slush. There is also a section for dessert and of course things like thick toast. 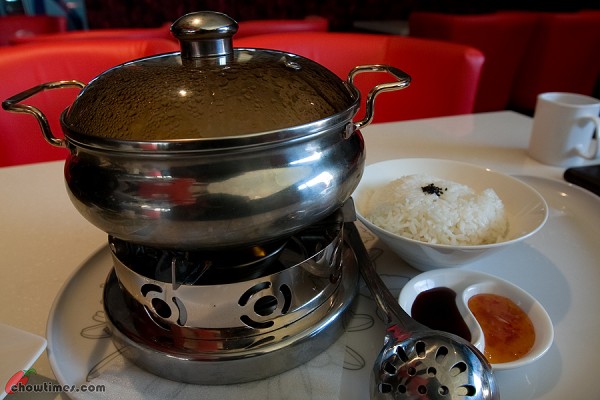 This was what I was coming for … and what I saw on Nicole’s Facebook.

Not knowing what to choose, I randomly chose the one called The One Seafood Hot Pot with Rice. This is $13 — quite pricey but it also came with a drink and a small dessert.

I thought the hot pot was unique and definitely bigger than most.

This is more like it … a boiling pot. Most other places have that token light at the bottom that does a little more than keeping the soup hot.

It was disappointing to learn that the soup base is milk. It did not occur to us to ask when we placed our order. Both Suanne and I personally hate milk as soup. As a matter of fact, Chinese rarely uses milk in cooking … did you know that? So you find that diary products are not big in traditional Chinese cuisine.

Normally Suanne would be the one who will finish off the soup but she declined saying that the one in Pearl Castle is better. Although it was not my fav kind of soup, I thought it was quite good.

The Hot Pot has a lot of ingredients. That included prawns, mussels, fish cake, tofu, very bouncy fish balls (which bounced across the restaurant when I dropped it on the floor), other meat balls and octopus.

Here is the drink that came with the Hot Pot. It is an … Iced Plum Juice.

The dessert that came free with the Hot Pot is really small but unique. It is a green tea jello with osmanthus syrup.

Our waitress recommended that we try The One Sliced Beef in Pancake ($6).

Honestly, it was just so-so. The pancake was very dough-y as you can see. We expect it to be flaky and layered. There is not much of  beef in it too. We tasted more of the sauce than any beef. What I do like is the green onion.

You be the judge … the picture above does tell a lot doesn’t it?

The Salty Deep Fried Chicken Nugget ($6) however was top notch. We were told we had to wait 5-10 minutes for this. When it came it was piping hot.

For $6, we find that this is a generous serving. The deep fried basil is a nice touch. The nuggets … perfect! The meat was tender, an indication that they did not overcook it which happens so often elsewhere. The texture had that perfect softness. The outer batter was light peppery with only a slight tinge of saltiness.

With the Lao Shan Dong name behind The One, we expected this meal to be perfect. It wasn’t bad at all but the two out of three dishes just fell slightly short of expectations.

We saw the neighboring tables having that huge bowl of Taiwanese Beef Noodles soup. The bowl looks bigger than the biggest in Lao Shan Dong. Maybe we should have stuck to the basic and gotten that instead.

The prices are not bad. Just $25 before tips. We will definitely be back to check out their other dishes … and the TBN too.

Fish On Rice on Kingsway, Burnaby