One of the things Suanne and I enjoy in life is having dinner with friends — dinners that are unrushed, with no agenda and purpose other than get together and talk, talk, talk. We had a great time with TS and JS (Eating Club Vancouver) and ET and Christina (Doesn’t Tazte Like Chicken) last Friday.

TS and JS organized this. When they invited us, we dropped our Friday date plans for this. It had been a while since we last met up for Dim Sum at the Top Gun J&C in Richmond.

That Friday night was the Opening Ceremony night of the Vancouver 2010 Paralympics. Driving across the Granville Bridge, we were caught in a traffic snarl — almost a gridlock. So, instead of chancing it, we parked our car immediately after the bridge to walk. And guess what … the road was so empty and quiet all the way from the foot of the Granville Bridge to Mis Trucos on Davie and Thurlow. 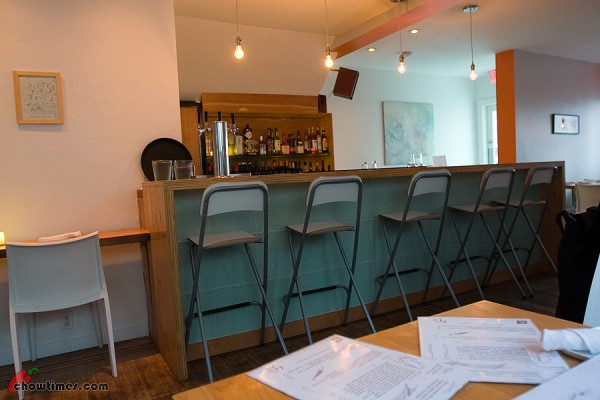 Mis Trucos calls themselves a Mediterranean tapas bar. We were kind of surprised how simple and small this place is — just about 8-10 tables in a very casual setting. We were also surprised how empty Mis Trucos was on a Friday night.

The interior was very dark — while romantic to some, but for us, it’s difficult taking pictures. 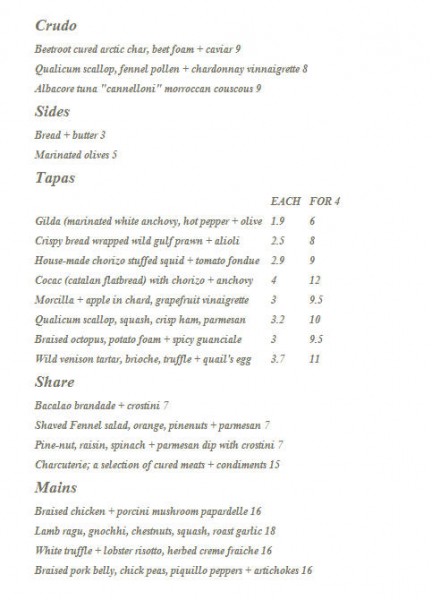 The menu is also simple. Just a 1-pager. Most of them are tapas size items. Actually some of them are so small I don’t know if I want to call it tapas. It is so small, I might not even call it bite-size.

Not knowing what most of these are like, we just left all the ordering to TS and JS. 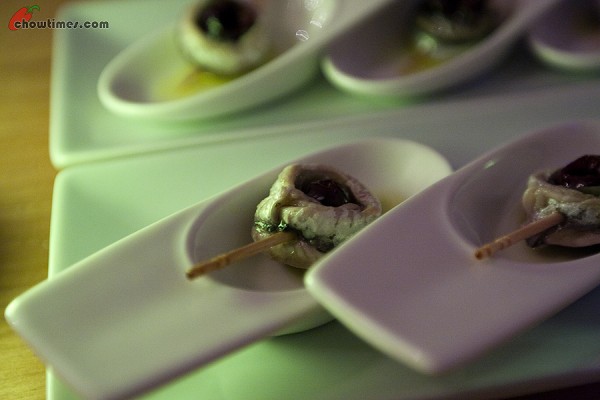 Like this one. The Gilda is Black Olive wrapped with anchovy. This is $1.90 … each!

OK, you may call me cheapskate — permission granted but I thought it was overpriced.

But we have six of us and when we ordered one for each of us, we were billed $9.80. Basically they bill is one order of four for $6 and the other two orders of one for $1.90.

It tasted really salty. Moreover Suanne and I are not fans of olive as much as we tried to like them.

Got to hand it to Mis Trucos. The Foie Gras was excellent. I recorded four long “Mmmmmms” from ET. ET is a picky eater (Christina said so many times! LOL!) … and so I reckon if he approves, it has to be good.

It was. The sweet and tangy jelly balanced the rich creamy foie gras. This is $17.40 for six bite sizes. Good but expensive.

The Coca is a Catalan flatbread topped with chorizo and anchovy. We got two Coca at $4 each.

This is really nice and especially with the really … thin and crisp bread base.

The Morcilla is black sausage, apple in chard; grape fruit vinaigrette. It has a nice tang to it.

Suanne said that the Octopus was chewy but it was so small that I can’t determine the chewiness. The potato foam was firmer than we expected. 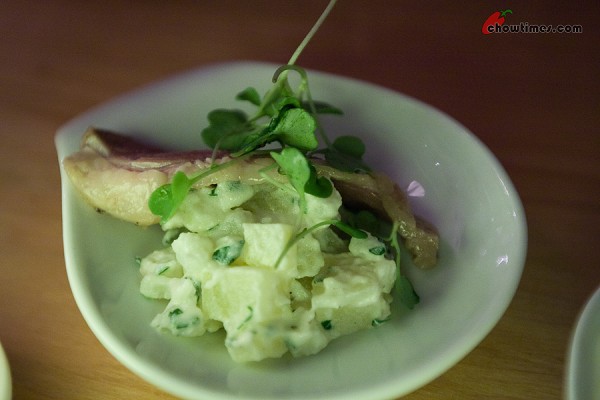 The Corned Duck (looked like a fish when I ate it – I could be wrong) were served with some potato salad.

Then there is the Chorizo Stuffed Squid with white beans. Which is kind of salty and small too. $9 for four.

Bacalao brandade and Crostini is what I liked best. $7.

On the menu are some mains. We ordered a couple of mains to share. The above is the Ribeye ($25). I think they cut it into bite sizes for us when they knew that we are sharing. This was not on the menu and was the special of the day.

The Lobster Risotto was marvelous. $18.

Believe it or not, the six of us also shared the dessert. It was so small that when we divided it to six equal shares, it was like just a spoonful. LOL!

The Vanilla Pannacotta above was $6.

The Molten Chocolate Cake served with ice-cream was $8. 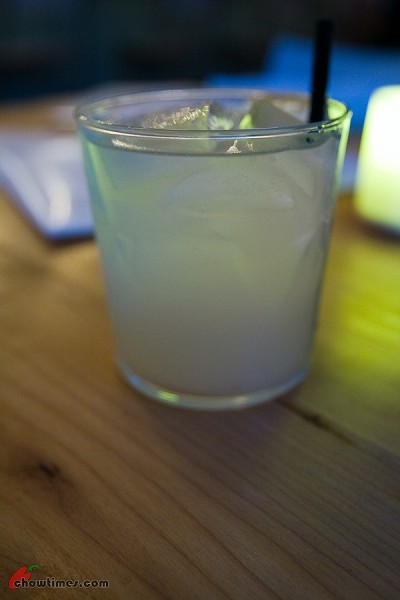 Mis Trucos does not have much option for non-alcoholic drinks. They have pop but told us that they can make a grapefruit + soda drink ($4) if we wanted.

Sorry for the brevity of this post. This is because we had such a great time chatting that we did not really talk about the food we had, nor did I really pay attention to the food.

The food at Mis Trucos was pretty good for the most part and I enjoyed it. But I just can’t help but keep thinking how overpriced everything is. This is one of those places where a few dollars a plate is nothing but when added up it is quite a lot.

The bill was $196. The kicker was when they brought out the little handheld credit/debit card device, for the TIP, their default is 20%! We felt it was quite presumptuous too even though there is a button that says “OTHER”.

So we ended up paying about $235 for the six of us. You tell me if this is worth it.

But we had a great time for sure. TS/JS and ET/Christina are such great dining companions. Wait for next week … we are going next to an Alaskan King Crab dinner and I bet it will be a better deal than this one.

OK, you may continue to call me a cheapskate.