The question of who has the best Roast Pork (Siu Yook) in town will never be settled. The thing is, different people have different preferences. Whatever the preference is, a lot of people are certainly passionate about their favourite Roast Pork.

Although this post is about the award winning BBQ Pork from HK BBQ Master, I like to take this opportunity to get your views about their Roast Pork. Personally, I am not a big fan of BBQ Pork.

The HK BBQ Master is a really small restaurant and located oddly in a covered car park. Although it is small for a restaurant, it is big considering all the big time Chinese BBQ shops do not even offer a sit down area. Yeah, most Chinese BBQ shops are to-go kind of places. 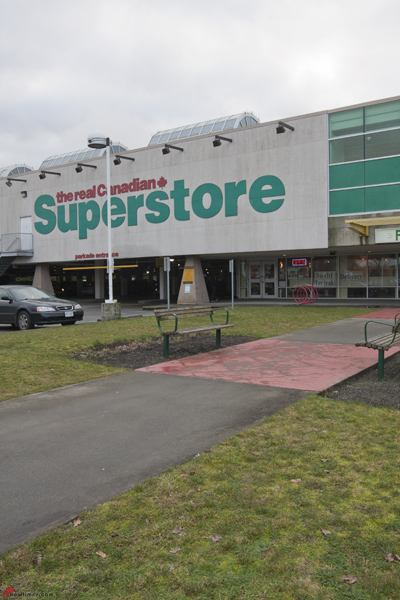 HK BBQ Master is located at the ground floor car park of the Real Canadian Superstore on No 3 Road. The Superstore is not normally a destination that you would associate with great food but yet this one does.

Let’s face it. This tiny place is extremely popular. There is always a constant stream of customers even at off peak meal times. We thought we be smart and go at 3:30 PM but … the above was what greeted us. It was not even CNY yet just in case you think the crowd was because of the festival.

There are only 16 seats in the cramped area. The table turns very fast and so we did not have to wait long. People normally come here for a quick meal and then go. Most people come here and buy to-go.

The gentleman standing on the left (wearing black), he seems to be the owner. He came by to chat with us when he saw the camera. It seems to me he is a seasoned with dealing with “media”. I remember reading that he put up signs lobbying for votes to win the Chinese Restaurant Awards. Smart guy. 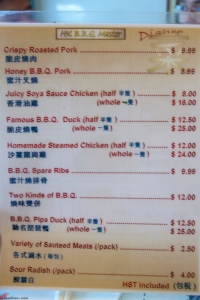 You can click on their menu above to show it larger.

It’s all about meat here. This is meatatarian heaven. There is a token item called just simply “green vegetable” but that is just to play pretend that you are eating healthy. The serious stuff are the:

Yeah these (or combinations of) are what HK BBQ Master is famous for. Collectively these are known as Siu Mei in Cantonese. So these type of food are Cantonese-y.

I like that their prices include HST. So you pay just what is stated on the menu.

Service is very fast. To some who are not used to this, you would feel being rushed to order, eat and get out. You don’t have to feel that way. It is just the way it is with places like this. It is all about efficiency … no dilly-dally.

You can see that they uses all cheap disposables. Once you are done, in the dustbins it goes. No cleaning and all.

Hehehe … at that time we were there, some of the workers were sitting down next to us having their late lunch. They had siu mei for their lunch … a huge plate too. Lucky bastards. While we had to use disposables, those guys uses ceramic bowls and plate with real chopsticks! 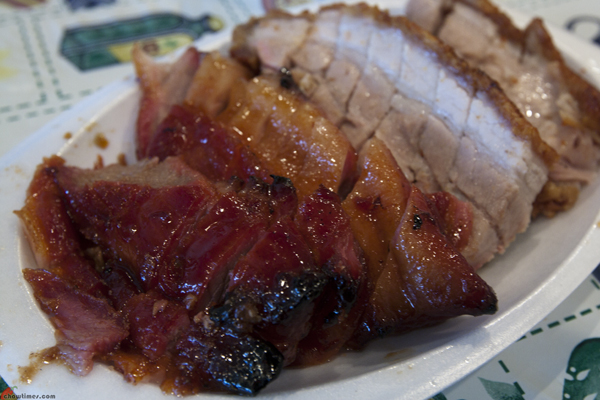 We were bent on trying as many types of siu mei as possible. So we ordered the “2 Kinds of BBQ” which is $12. We asked for BBQ Pork (Char Siu) and Roast Pork (Siu Yook).

Here they will ask you how fatty you want it. For the daring people, they will ask for “fei did” which means “fatty a little bit”. Hehehe … the word “a little bit” does not really mean a little bit. It is just a way of saying “give me the fatty part, I don’t mind”.

Then there are the type who feels guilty about eating all the meat who will say “sau did” which means “leaner a little bit”. Yeah … “a little bit”. LOL!

For us, we are both daring and feels guilty eating all the meat. So we asked for “boon fei sau” which is half fatty, half lean.

OK sit up and pay attention to this one above. This is HK BBQ Master’s award winning Char Siu (BBQ Pork). They not only won GOLD with this item in 2010 in the Chinese BBQ category, they again won the same award this year.

You can see the shiny glaze and charred outer layer … hallmark of a great char siu.

Let’s take a closer look. I think what appeal to people about their char siu is how moist (and greasy!) it is. Many ho-hum Char Sius looks all too dry and the meat all too white. Some people have preference over the drier look.

The amazing part of their char siu is the fatty part which I felt what sets them apart. The fatty portion is not oily and soft. Instead it is springy and so that you don’t feel “geli” eating the fatty part (that’s a Malay word but can’t find the English word for this. Help?).

I can see why they won awards two years consecutively. 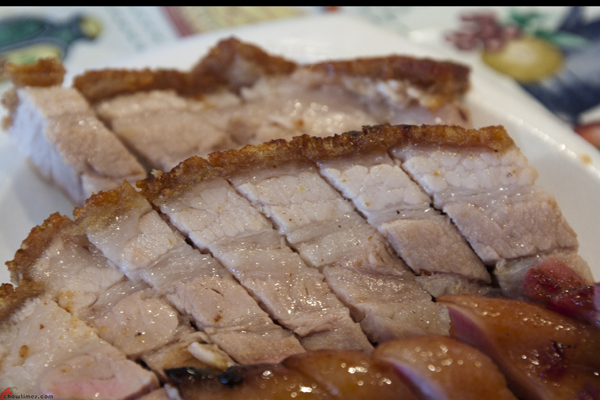 This is what HK BBQ Master’s Siu Yook (Roast Pork) looks like. You notice that it is made of the pork belly part.

This is the fundamental difference of the Siu Yook in HK BBQ Master with the ones from Parker Place. In Parker Place, they roast the entire pork and then they will cut you the piece from the part you want.

However, in HK BBQ Master, they do NOT roast the whole pig. Instead, they roast only the slab of the pork belly.

I was curious and so I took the opportunity to ask the owner his take on why he did it the way he does. According to him, he chooses to roast only the pork belly because he can ensure consistency every time. The lean to fat ratio is consistent.

He also said that it is more expensive to just get the pork belly and that doing the whole pig not only is cheaper but that it will result in some part too fatty and some part too lean.

That was what he told us. It sounded convincing but at the top of my mind was maybe he did not have the equipment to do bigger pigs or even suckling pigs?

At the end, I still prefer the ones from Parker Place. I personally did not quite like the greasiness on the lean part and the several layers of fat-lean. Well, to each their own, right?

At the end of this post, I had embedded a poll and I hope to get your input on Siu Yook. It will be interesting to see who likes what. 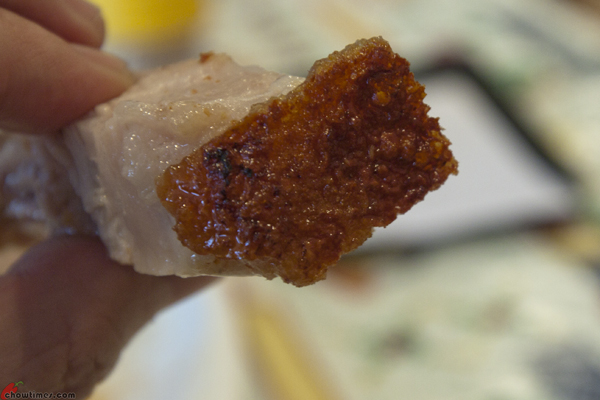 This is my favourite part. I tell Suanne that this is the “jue pei bang” which is a type of cookie … the pork skin cookie. 🙂

The pork skin in HK BBQ Master is rougher and the blistering more. Which is nice!

You know, I like pork skin so much I always hoped that I dare to ask the BBQ shops to sell me just the skin. You know like saying “yat boong jue pei, mmm gooi” which means “one pound of pork skin please.”

I think they will yell at me “chee seen” (short-circuited).

But seriously. This one thing I can’t figure out. Isn’t pork rind and pork skin the same thing? If so, why is it that pork rind is such a cheap commodity and yet they can’t use the same to make more pork skin and sell it as cheaply?

We also got half a BBQ Duck which is $12.50. It looked absolutely juicy and sinfully delicious. Yeah, a good BBQ Duck must have that glistening skin. It cannot look healthy. If it is healthy it is not good.

We thought this one is better than the roast pork and the BBQ pork. The skin here is not crispy but has a nice smokey taste. But the layer of fat under it is just perfect … not too fatty and yet have enough to make it all worthwhile.

The leaner meat under that is exquisite with the unmistakable taste and texture of duck meat. To enjoy … to truly enjoy … put aside all decorum and eat with your fingers. You need to do it like our barbaric forefathers did during the stone age. 🙂

We had to have rice! So we ordered the rice.

When the owner saw us eating the rice just like that, he came over with a bottle of soy sauce and he proceeded to squeeze it all over my rice. Yeah … without asking me … and saying that his soya sauce is the best.

No seriously. I like his sweet soy sauce. I asked Suanne how come she can’t make it like this. Our version at home is more salty than it is sweet. The soya sauce here is also light.

Does anyone have a recipe for this type of sweet soya sauce. I will be eternally grateful if you could let Suanne know how this is made. I’ll name my next child after you. 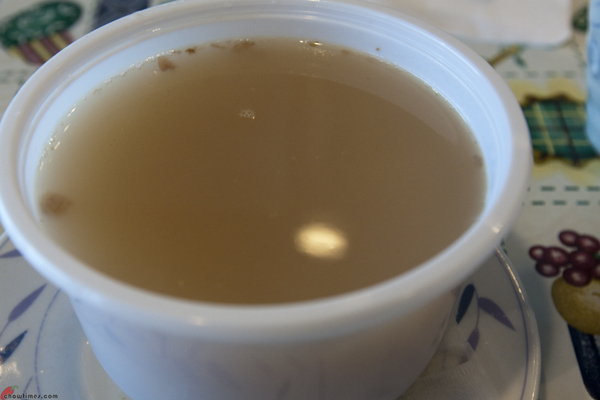 The soup of the day was the Arrow Root Pork Soup which is just $1.25. This is nothing much in it but has a distinct tangerine peel flavour. Nice but not awesome.

Not bad for a lunch-ner (or is it a dinch?) for four people.

I asked the owner why is that he does not expand his business given the number of customers he has. He obviously need a bigger space.

He said he had no plans to expand at all. He said he is happy doing what he does and that anything bigger will mean bigger headache and bigger worries. He had been operating here for 10 years now and he humbly said that he was just lucky.

I don’t think luck has anything to do with it.

I do think that places like this must be careful about expansion or making this place look fancy and all. It is not just the food that appeals to people. I think it is the whole atmosphere and experience eating in a place like this. To some there is a nostalgic value of eating in a cramped eatery with cheap good food, with all the jostling and feeling rushed … just like home in Hong Kong. LOL!

Here is a little poll. It is a simple poll of what your favourite roast pork place is. You can vote for more than one shop if you want.

Hehehe … just want to make sure sure you understand!

Butcher’s Best in the Richmond Centre