Hi All: Sorry about this but I just wanted to write this post with Suanne in mind. Somehow I felt everything I wanted to say is for her. It also makes it easier to write what is on my mind. So if you want to continue to read this, you don’t have to pretend you are Suanne. Just pretend you are eavesdropping on us and then if you want to chime in with a comment or two, please feel free. 🙂

I must have been so dead tired and I did not realize it. It was Sunday, my second day in Beijing. This is a free day for me and I wanted to make full use of it. Actually the whole idea for me to arrive in Beijing on Saturday is so that I can have at least 1-2 days to deal with the jetlag before a series of meetings start on  Monday.

I was woken up by my team members at 9:30 AM in the morning when they called my room saying “Hey Ben, are you coming with us?” They wanted to go to the Jade Market and the Forbidden City. Since I just woke up, I needed to have time on my own to deal with some matters and told them to just go ahead and I’ll probably catch up with them later on.

LOL! My executive suite had what they call Club Floor Privileges on the 24th floor. Free breakfast and I reckon it is nothing to sniff at. I was not interested. Instead I am hell bent on eating where Beijingers eat.

So after settling my stuff, I walked across the street from the hotel and just went into a restaurant. It is weird. The moment I walked in I hear a lot of people speaking in Cantonese. And then I saw Bolo Bau on some of the tables … and also milk tea. Since I could not read Chinese, I did not realize it is a HK Style Cafe.

Well, guess what I got. Bolo Bau (Pineapple Bun) just like everyone. They normally sell this at a pair at 13 RMB which is like just $1.00 Canadian each. I told the lady … “yit geh go liau”. 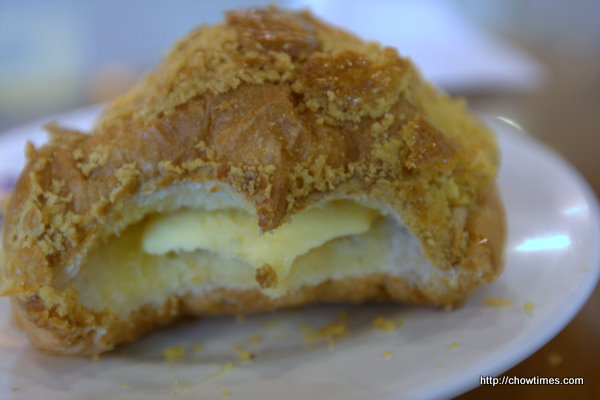 It was really good. It was served really warm and cut in the middle already. I slipped the butter into it and watch it melt. Oh man, this is really good. It is not like those in Lido Cafe back home. This one is different.

For one, it is warm. It is also soft and the “pineapple” thingy at the top disintegrates as I took the first bite. It was messy eating it. Yeah, I am gonna come here again for a Bolo Bau one of these days.

Of course, I had milk tea like everyone else. It was rich. Very good. Not one of those watered down nonsense we find in some cheap HK Style Cafe. I really like it. Got oomph!

If I am not mistaken, this is 13 RMB ($2 CAD). Hmmm … quite expensive for Beijing standard?

I wanted to try something else. Since the menu did not have pictures and they did not make sense to me, I just pointed to the poster of three noodles as you see on the left above.

I told the lady I wanted the third one, at the bottom and the one with the largest picture. I guess it must be good since it is printed larger than the other two.

This was really delicious and is chockful of beef parts. I never had so much beef in one bowl of noodles. I don’t know man … I just find that the noodles, the soup and the meat here are so much more delicious than in Vancouver. Yeah, maybe it is just my imagination but I truly enjoyed it. A lot.

They do take their food seriously. Can you imagine that … that they actually snip off the head and tail of the bean sprout and serve it like above? Yeah, it’s the middle section that is most important.

Given that it was close to afternoon already, I decided not to go to the Forbidden City. The Forbidden City is one place I want to spend a lot of time going through it thoroughly. I think I need a full day there to do proper justice.

You know I love museums and I know your eyes glazed over when we are in a museum. Museums are just not your thing but I know this one will be one you will like. I think you can relate to the National Museum of China.

The imposing and huge building is located just next to the Tianamen Square. Yeah, this is the visit I wanted to learn more about my heritage. It is like finding my roots and understand what “my people” is like. That sort of thing.

I guess I am not surprised with the long line to get in. It took a good 40 minutes just to get in. It is actually shorter if I don’t carry a bag.

I took it in stride but there are many people who tried to worm their way past me. Graciousness is not one of the virtues to everyone here I guess. It will take time for China to get to the level of politeness and graciousness that we take for granted in Canada. Yeah, I do find that people are surprised when I stop to hold the doors for them. 🙂

The queue was unnecessarily long. The system could be improved easily. If only I am in charge, I will cut the queue into half the time easily. All it takes is information and clear instructions. Some people were not sure if they can bring in camera and so they had to return to another winder to collect the bag to take out the camera. Some people did not know that they need to pay to leave their bag.

Entrance is free. I expected it to be free. This is after all the people’s museum.

The size of the museum befits the growing China. In sheer size, this rivals some of the biggest museums I had been to.

I did not have a lot of time. So I picked two galleries to visit. The one I look forward to is Ancient China.

This is perhaps their largest gallery. It shows relics from ancient China to the end of the Qing Dynasty. You know I had been reading about the Chinese dynasties a lot for the past little while. Coming here and seeing it makes a few pieces fall in place.

In the earliest history of China, the one artifact that is plentiful and most common is the ding (left, food container) and li (right, wine container).

I read somewhere once that the author argued that the advent of “cuisine” started when men began making vessels specifically for food preparation. The three legged ding is the earliest found for the purpose.

It started with a container resting independently on holders. 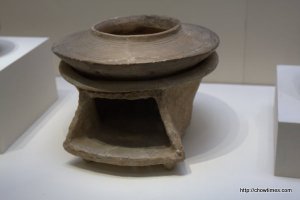 The ding got progressively more elaborate as time goes by. I wonder how they actually uses the ding. One of the things I felt the museum could do better is to show how these are used in food preparation. 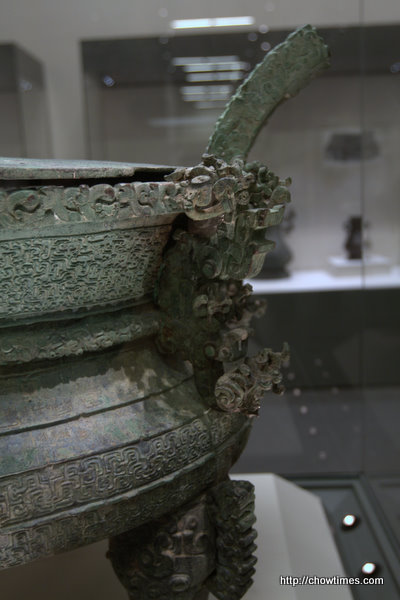 A lot of the exhibits of the early days had to do with food preparation. That is perhaps why the Chinese cuisine had attained that level of sophistication that you see today. 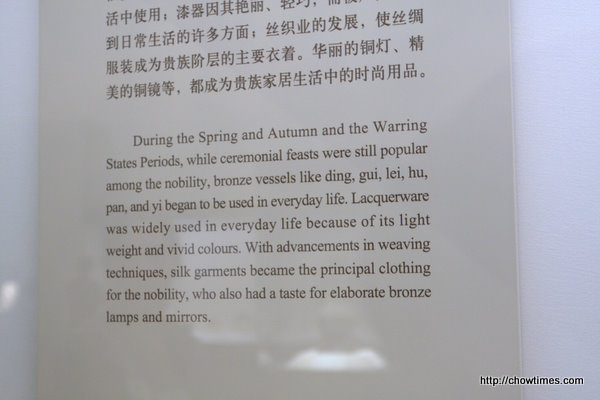 You know, I was thinking about the rise of China in the past couple of decades. The growth of China is unprecedented in all of history. Already it had stepped into second place as the world’s largest economy. Analysts are predicting that as early as 2025, China’s economy will be larger than the US. Seeing what I see here, I now know it is a very distinct possibility.

So is a strong China good for the world and for peace? We read about China’s forays in space by sending men into space. They are building stealth fighters. They are building their first aircraft carriers. They flexed their military might in that grand show back in 2009.

Does US and the world need to fear a dominant China?

You know, I really think not. I felt that the Chinese as a people and as a culture does not care about domination like other countries do. They are inward looking. The only Chinese dynasty that ventures out to conquer foreign lands is the Yuan dynasty which is basically Mongolians and not the Han Chinese. That is perhaps why you see that the Chinese built the Great Wall … to protect themselves from foreign invading forces.

The Warring States period was the time when war artifacts is found.

Even the coins in those days were made in the form of a knife. 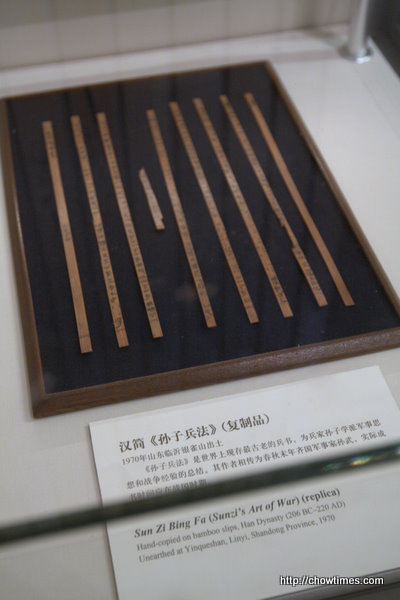 Oh so, the Sun Tzu’s Art of War (above) was written in bamboo slips. That was the days before the invention of paper. 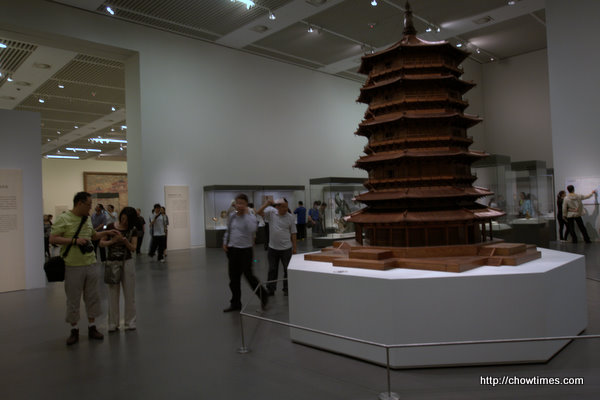 I took my sweet time going through the exhibits.

My parents told me when I was young that we were “Tong Yan” (in Cantonese). I am not completely sure but I think that refers to the people during the Tang dynasty when they were called the people of Tang. Is that right?

I also went to this other gallery called the The Rejuvenation.

This exhibit is strangely hard to find. There are some smaller signs in Chinese leading to it being at the far end of the museum and unlike other exhibits, the English banners were absent where the entrance is.

I think that this is a gallery meant for the local Chinese people. Well, this exhibit talks about how the Communist party save the nation and made it strong again. Yeah, I think it was a lot of propaganda stuff here. 🙂

This is one exhibit that is painful to watch by someone who is not Chinese. Most of the captions on the items on display are only in Chinese, unlike in other parts that there are a lot of translations.

The photos show how the world pillaged the country and things like that. I think a Japanese or an American especially might not stomach this exhibition. Yeah, I can see that it did draw out the emotions from the people there just like how people were affected going through a Jewish holocaust museum (which I went to several and so I know how it is).

Deep down, China is still a communist country. Sometimes I forget that fact when I see all the progress that is taking place in the country. 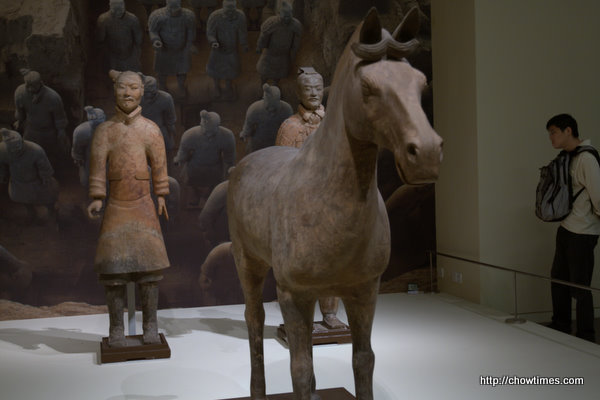 That exhibit ended of course with Mao’s declaration of victory at the Gate of Heavenly Peace. Yeah, strong propaganda stuff. But one gotta give them credit for what they had done for the country.

My First Day in Beijing