It’s actually already Wednesday morning right now. The past two days at work was grueling to say the least. So yesterday when I got back to the hotel, I had a quick dinner and crashed. Just got up at 5AM. Had a good sleep. 🙂 Yesterday I had dinner at this Kung Fu Fast Food place that many people were telling me about. It was awesome — simple goodness and it is soooo cheap. I’ll tell you more about it later.

I’ll just continue to tell you about the what happened on Sunday … and picking up from the visit to the National Museum of China (above).

It was after 3:00 PM already when I got out. I wanted to head to the … Mao’s mausoleum (above) in the middle of Tiananmen Square. This building is built on the all important north-south axis of the city. I did not know that they actually close at 12 noon and opens early at 8 AM. So I guess I have to come back someday to view his body lying in state.

So over time all the very important structures are built on the axis. In the Tiananmen Square, we have the National Flag, the People’s Monument and of course Mao’s resting place. is build on this same axis. Way, way, way north of this area … also along this axis is built the 1988 Olympic stadiums. Yeah, if you want to build a house here, you want to make sure it is along this axis. 🙂

Long time ago, Beijing is surrounded by walls. The walls are torn down now. The entrance to the city is through a number of gates (“men” in Mandarin). So today, even without the gates, the areas where the gates once stood are still know by the “mens”. Mao’s Mausoleum is build on top of a very important gate called the China Gate.

Oh yeah … if you notice, the North South Axis is tilted slightly. It is not an error. People believe that when the city was built during the Yuan (Mongolian) dynasty, this north-south axis extends all the way to the old capital of Mongolia, Xanadu. I wonder how they measured that in those days without a GPS.

We can’t get up close to the Monument of the People’s Heroes. I was reading my guide book that has a detailed description on the design of this and would love to see up front. 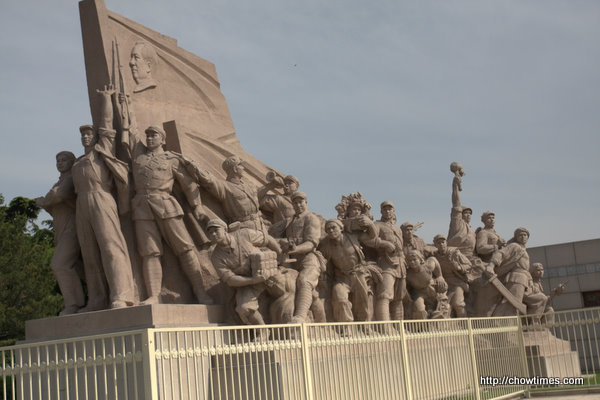 I did not spend much time here since the Mausoleum is closed. It was interesting to watch people around the square.

BTW, there is security checks before they allow you on the square. They scan your bags. There are alot of people offering to take pictures for people who did not have a camera for a fee.

Just south of Tiananmen Square and also along the North-South Axis, are two more gates. They look stately and seem like they had been restored and well maintained. I was wondering if I could get up there. I saw people up on the fort but I was just too lazy to cross the street here.

Crossing the street in this area is kind of confusing. Some places are connected via underground tunnels.

Oh about crossing streets in Beijing, it is so dangerous! People, bicycles and cars just weave between each other all the time. Every time I need to cross the street, I embed myself in between those Beijingers and let them help me cross.  I won’t be able to make it on my own! And the streets are wide, like 4-5 lanes in many places. Oh … 4-5 lanes ONE WAY. So if you want to cross, you gotta navigate 8-10 lanes sometimes. No worries, I’ll be careful! 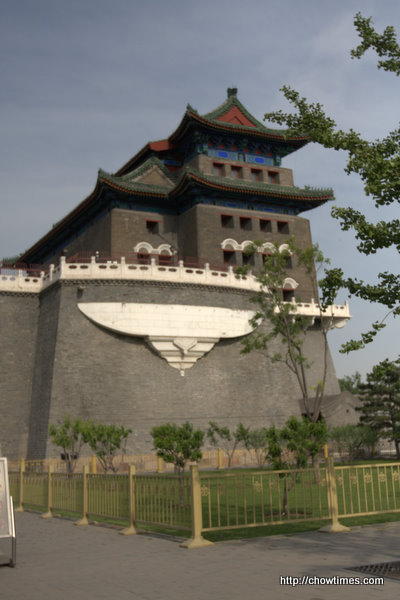 Anyway, I will come back around this area again because it is so interesting. 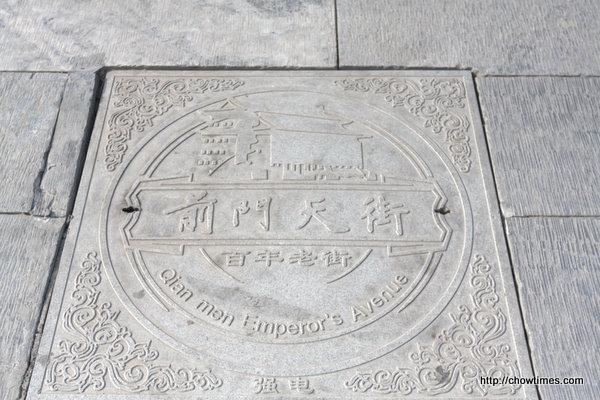 Walking along the path of the emperor heading south is Qian Men. 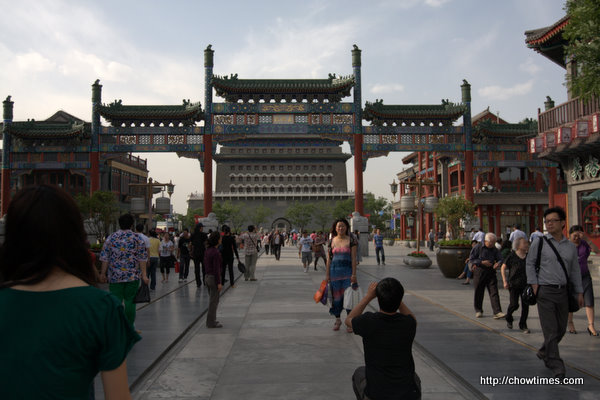 It is just a stone throw from the “men” I talked about above. See the “men” at the background?

See that North-South Axis too?

I like this street a lot. No cars. I don’t know how to describe this. This is like Robson of China. They have shops that sells famous and olden Chinese brands. I think you can recognize a lot of them here. I went into a number of shops but dare not take pictures inside. If you are here, honey, I am sure I will come out of the shops with a lighter wallet.

All the shops are like above. Here is giving you an example. 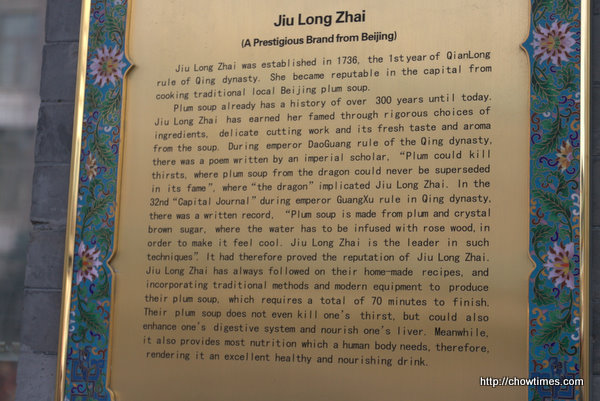 Outside the shop there is a plaque that describes the brand and the history behind them.

This one in particular is plum drinks. The packaging is modern now. I wouldn’t have know about this if not for the information that they put out in front of the building.

Oh yeah, I went to this one shop called chopsticks which sells really high end chopsticks. There was this pair that I like to buy but it is 600RMB (about $100). It is ebony and topped with something I don’t know. Very nice to handle and all. Almost bought it but sanity prevailed. I know I will get that tsk-tsk-tsk look from you when you see that I spend $100 for chopsticks. 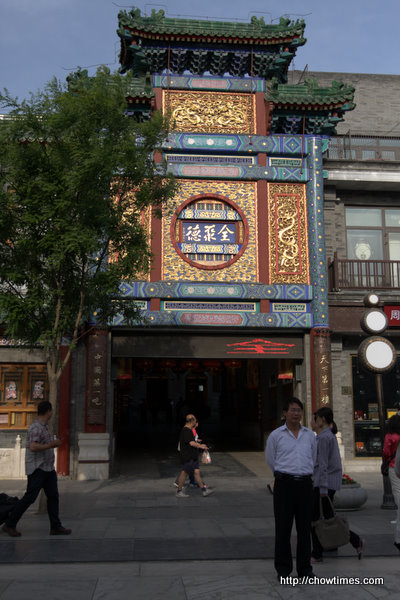 Ah … the first Quan Ju De Roast Duck restaurant is located on this street too. 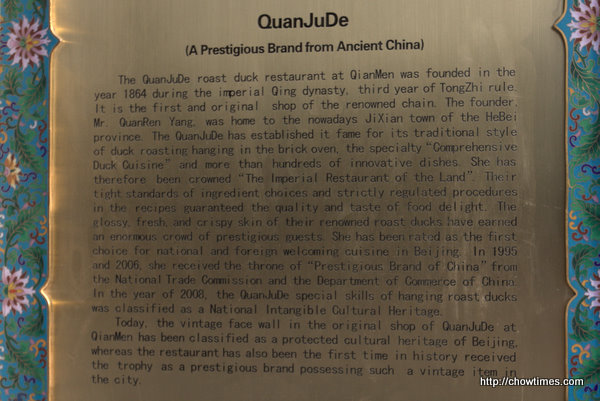 It does tell a bit about the restaurant and its beginnings. I was already texting my team about meeting up for dinner in Quan Ju De. So I look forward to the dinner that night! We are not going to go to this one but the one that Premier Zhou En Lai’s favourite which is on a 7 storey building.

Because of the age of the restaurant, they were restoring the facade.

Still work in progress but it is almost done. Actually the frontage here is inside a courtyard. You can’t see it from Qian Men.

I remember you tell me about Gou Bo Li (“Even A Dog Will Ingore” in English). Since it was going to be roast duck dinner that night, I will come back to eat here some other day.

I then went into the side streets and saw more and more stores. And before I knew it I was in a Hutong. It is the old Beijing. I did not take pictures at all because I was not sure if it is a good idea to walk around with an expensive looking camera in hand. :-0

There were a lot of small eateries. I would go and eat in those but I did not because I would have difficulty ordering anything. Everything is either in Chinese or people knows what they have. There were stalls selling buns, grilled seafood, grilled meat, muslim food and snack. They operate out of a really small space.

While walking in the Hutong, a girl on a motorbike crashed right in front of me! She had one hand on the cell phone and another on the handlebar. Gosh, I can’t believe her. She glanced at me and said “Doi Bu Chi” (I am sorry) and continued talking while her motorbike lies on the side. Must be some conversation. 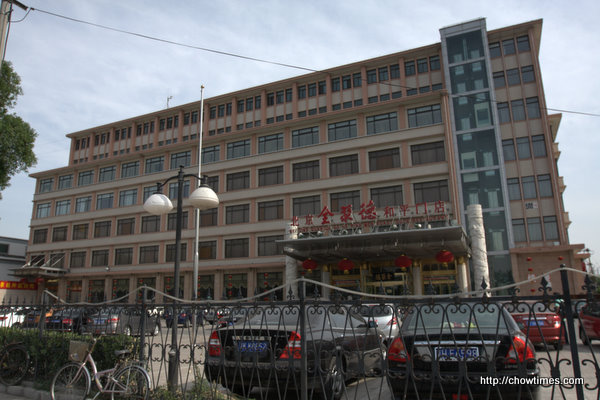 I made my way to the Quan Ju De along Xiamen and Heping. Thanks honey for texting me the address. I got that.

This Quan Ju De is a massive 7 stories of dining area. Amazing huh? I really wanted to go to this one rather than the original place. After all, this is the place endorsed by none other than the late Premier Zhou. Actually there are a lot of Quan Ju De around Beijing. There is one about 1/2 km from my hotel too.

Guess what. My team texted me that they are too tired from the jet lag and that they wanted to stay back in the hotel.

Dashed! Oh well … but then I understand too. They got in to Beijing later than me.

So I walked over to another restaurant for dinner. I wanted to save up Quan Ju De for another time with the team.

This one is called Jin Zheng Yang, I think.

This is an award winning restaurant so says the plaque. 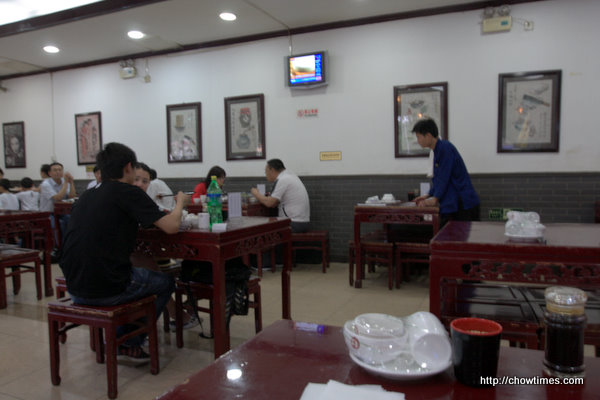 The inside is warm. Air conditioning does not really do much in many places in Beijing. I think they are having power shortage and is trying to save on energy. Beijing is a hot city but at this time of the year it is not bad. Beijing is definitely a hotter city than Vancouver.

The seats and tables were traditional Chinese style. I was so tired and there is no backrest for the chairs? LOL!

I spoke in English here. I got great service. The waitress was so happy trying to speak English with me. “One? Yes, Yes” … “This One? OK OK” … that sort of thing.

Good thing the menu have pictures and have English words. 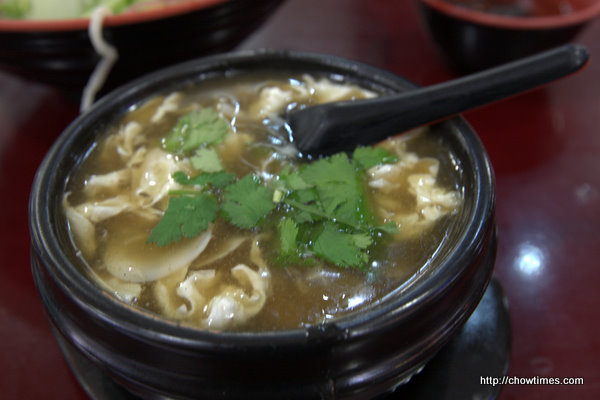 I got the Cuttle Fish Roe Soup. Delicious! You know when I am here, soup is just good substitute for water or tea to me. This soup is vinegarish and spicy. It is a heaty type of soup which I know you will like it a lot. Yeah, I know you will finish it off yourself and leave me none. 🙂 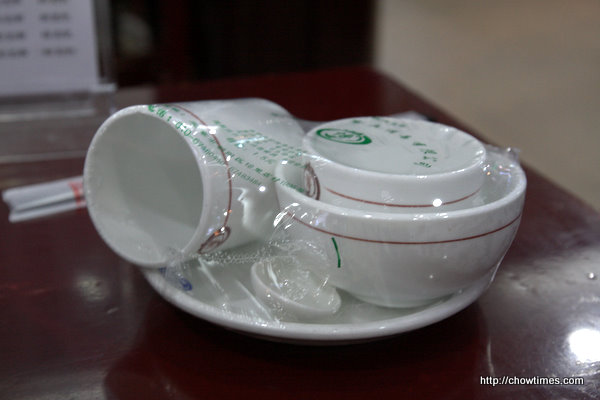 Look at that. They shrink wrap the plates, bowls and cups. I was wondering why it is done this way. I think it will be convenient to bring the entire set like this without having to fish out each item when setting the table. I think it also gives the impression that this is clean. 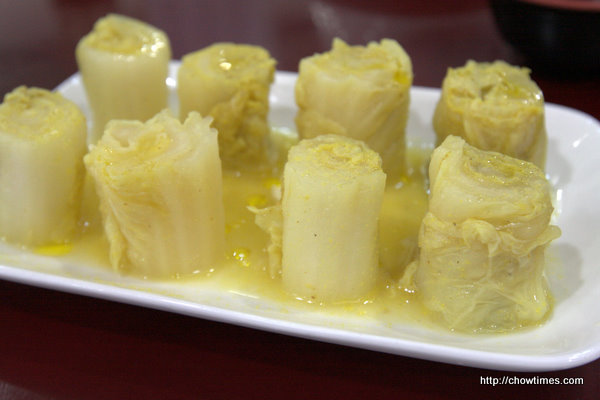 The Crispy Cruscion is what they call it.

I made a mistake. I shoved the entire piece of it into my mouth and choked. It is cold and it is like eating a whole piece of wasabi! I had to unroll it and eat a small piece at a time and then only did it taste a lot better. 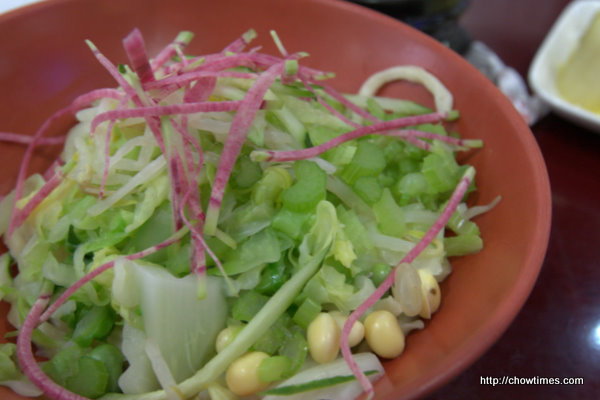 It seems like their money dish is the Fried Sauce Noodle in Old Beijing Style. There is a big poster 6 feet by 12 feet of this dish outside the restaurant and so I had to get this. The poster outside shows a bowl of noodle and nine different type of ingredients on a tray. So I expected that tray but it seems like they just dump all the ingredients into the bowl. 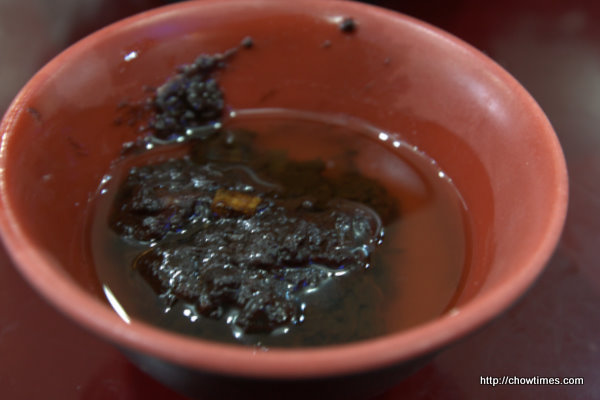 The sauce is by the side with quite a lot of oil as you can see. Looks exciting with all the oil!

Poured into the bowl.

Mix it up nicely. It was good although a tad salty where there are clumps of the sauce. It is a potpurri of tastes and texture. 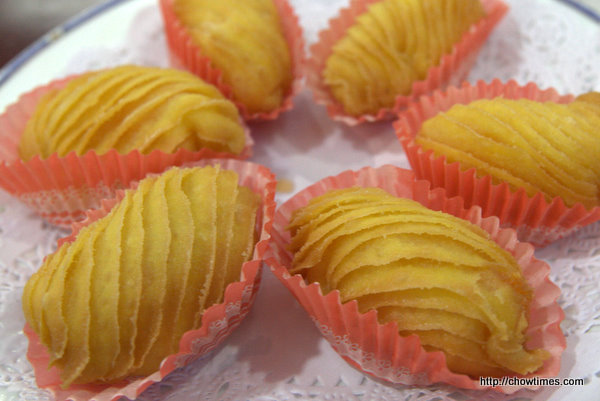 For appetizer, I got their Papaya Crisp Cake. The waitress gave me a thumbs up saying that this is an excellent choice.

It was super crispy. I was not entirely sure if the inside is actually papaya as it is hot. Whatever it is, the papaya oozes out like it is liquidy already.

That, my dear, was my Sunday. So what do you think?

I got back to the hotel and had to start focusing on work. There is a big agenda scheduled for Monday and I need to prepare for that.

Will tell you more about my work day in the next post.