One thing I find about Beijing is how remarkably flat the entire city is. When I first got here, I was quite perplexed why the Chinese dynasties of the old days would want to choose a location like this for their great capital city. The area is close by the edge of the Gobi dessert. It is dry and arid. The soil is baked solid hard. Because it is so flat it is also devoid of any natural landmarks except for a few lakes.

Many great ancient cities in the world are located next to a great body of water or by a mighty river. But why not Beijing?

I’ll tell you about that in a later post.

The good thing about the flatness of Beijing is that it is walkable. That explains why too there are so many bicycles in this city. It used to have more bicycles but the number is dwindling as people opts for other mode of transportation these days. Still the roads here have separate bicycle lanes right next to freeways.

So I had been doing a lot of walking the past few days. The furthest I walked must have been the day I went to the Forbidden City. It must have been at least 12 km in all. The attractions here are vast. It takes a lot of legwork to cover them.

Oh, I am proud to report that I have learned how to jaywalk after the past few days. Yeah, I can cross a 6 lane road on myself … with cars and bicycles zipping past me front and back.

Mostly, I jostle myself in between the locals and let them help me cross. That is the best way to cross roads here. These guys grew up with this sort of traffic and they have that instinct needed to know when to put a foot forward. Their timing is impeccable. Make sure that the people you follow is a Beijinger though! 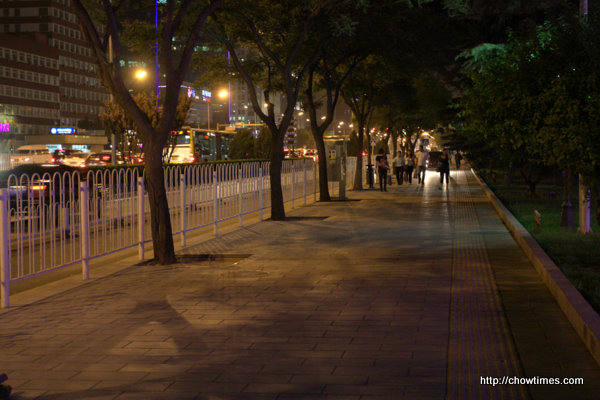 I felt very safe walking around Beijing. People here are also telling me that there is no safer place in China than in Beijing. This is after all the nations capital and where their top leaders live. So security and safety is the tightest here.

I could walk everywhere at night on my own without really needed to worry. Of course, I still need to be wary of my surroundings especially in crowded area as I was warned of pickpockets or people taking things from your bag if you are not careful.

At worst, I had been stopped by people in the street but as long as I said “Bu Yau” (don’t want it), they leave me alone. Some are persistent enough to walk with me but if I keep walking and not look at them, they will back off. Sometimes it is people begging for money and sometimes it is people asking me if I wanted a massage. There was once a girl asked me if I wanted some “services”.

People are generally responsive when I ask for directions. They will be in a hurry, not give you eye contact or seems abrupt. Some people do stop and talk to me but there are not many of them who would do that. It is just how the people are, not like in Vancouver where people will generally stop and talk to you.

After so much walking the past few days, my shoes are close to falling apart. I can see the soles are thinning out and so it was slippery. I went to the Great Wall and it rained … and coupled with threadless soles, it was dangerously slippery. I know … I know what you will say. I know you will ask me to buy a new pair of shoes while here since they are cheap. LOL! I did take a look at some shoes here but I still prefer the North American ones (although I know some are made in China). 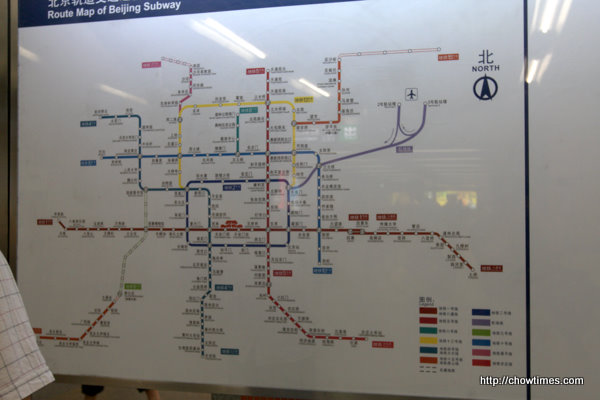 Beijing is a very large city. If you think that walking within an attraction is challenging enough, it is impossible to walk from one attraction to another (except for the Tiananmen/Forbidden City area).

Good thing they have a vast network of subway station. Because of the 20 million people in the city, this is still not good enough. They are building the subway system at a furious pace. I was told that they are going to put in four new LINES (not stations!) for the next 3-4 years. 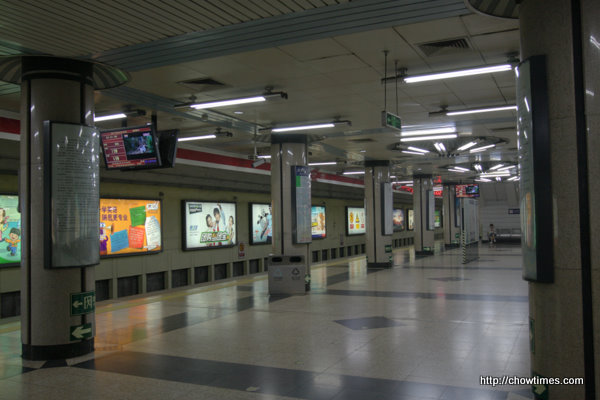 Their stations are clean and definitely more comfortable than the London and Madrid subway which as you remember was stuffy and smells. Anyway, the system here is still very new and not the century old systems like in other cities. Hehehe … given a century am sure this system will probably be like that.

One thing I like about the Beijing subway is how ridiculously cheap it is. It is just 2 RMB which is equivalent to 30 Canadian cents only for each use without regards to the distance traveled. It is no wonder that the system records several millions of users every day.

The vending machines are in both Chinese and English. But they had only once worked for me. So I just did what most people do and that is to buy the tickets from the booth. It was fast and easy. I just have to shove 2 RMB into the window slot and they will throw me a ticket. No eye contact. I don’t even have to grunt a word of please or thank you. 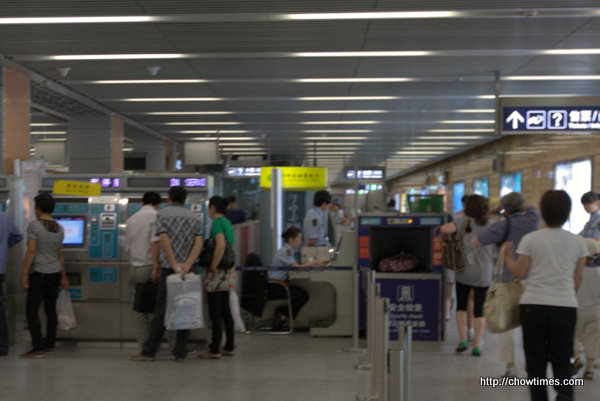 All bags are scanned as you get into the ticketed area of the subway. I guess the country is now more concerned about bombs and such. I don’t really know if China has enemies who hate them enough to bomb them. I can only think of the people from the western part of China who wants to be separated. I guess it is better to be safe than sorry.

Anyway, they don’t seem to be too serious about the scanner thing. Many times I saw that the people manning the scanner were not even looking at the screen as bags were passed through them. 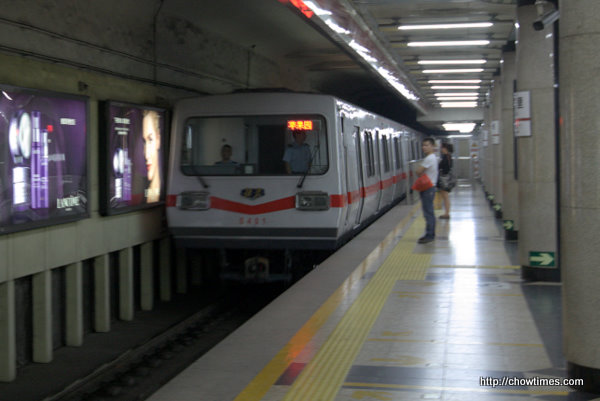 Their trains are wide. It comes around every 4 minutes or so.

The system is incredibly packed. Yeah, the picture above was taken in off peak hours. During peak hours it is crazy. There was once when I was at the door inside the train when it stopped at the next station. It was so packed that I could not even move.

When the doors opened in the next station, I thought that no one would be able to get on. I was wrong! Before I knew it, I was pushed all the way into the middle of the train. I did not know how they did it but it was done. Gosh. I quite feared for my life as I felt being crushed and my feet was briefly lifted off the floor!

Since then, I decided not to use the subway during peak hours.

Oh, here there is no “ladies first”. People are very assertive in claiming space and if I give them an inch of space they will take it. There was once I stepped back and allow an older lady past me to get on the train and before I knew it, the older ladies (young and old) behind me were cursing and pushing past me.

So I did a bit of travelling using taxis instead. They are cheap too by western standards. They start at 10 RMB ($1.30 Canadian) when you get on and it is just 1 or 2 RMB per km, I am not sure. Whatever it is, most of my trips were just 20 – 25 RMB which is less than $4 Canadian. It is a lot more comfortable riding a taxi compared with the train.

The fares are metered and so you can be sure you are not fleeced by the taxi drivers. Sometimes they tag on 2RMB to the fare on the meter and they issue me a receipt in Chinese. I am not sure what it was … maybe it is some government surcharge or something. Anyway, it is just 2 RMB which is really nothing to be concerned over.

The drivers do not speak English. So you are better of either knowing how to say the place name in Mandarin or better still have a piece of paper with the name of the place at hand. I use the map and point to the location of the map when I get on the cab.

You can hail a cab from almost anywhere. There are no designated taxi stands here but there are certain main streets where no cars can stop. Just lift your hands and they will stop. There are a lot of taxis so getting one is never a problem for me.

Some cab drivers do pick their customers. I understand that knowing how nightmarish the traffic could be in Beijing in some places. So what I do is to hop inside the cab and then only tell them where I want to go. One taxi driver does not want to go to a certain place and pretended to not know where I wanted to go.

By and large the taxi drivers are courteous. Some are not. I just don’t let those get to me. Whatever it is, the taxi services are regulated and so you can be sure that if you know your rights and you have intention to complain, they will toe the line.

The Bell Tower and Drum Tower of Beijing