Did you know that the tallest building in the world is in Philadelphia? No kidding … I am not referring to tallest as in the Burj Dubai, or Taipei 101 or the Petronas Twin Towers. 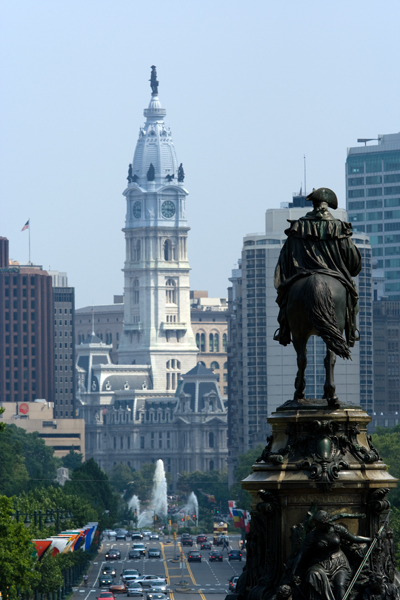 That tallest building in the world is the City Hall in Philadelphia. The City Hall is at the center of the city … so center that there is a sort of a roundabout (more like a “squareabout”) around the City Hall. If you can imagine it … they put the City Hall right in the middle of the intersection of two roads that bisects the city into quadrants. 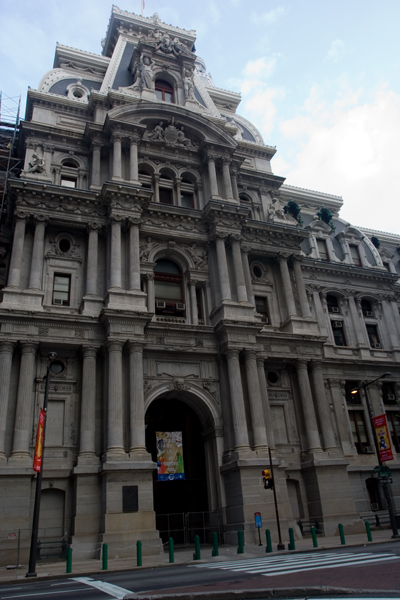 The reason why this is called the tallest is this is the tallest masonry building in the world. There are no steel frames that support the building. The entire weight of the building is borne by the sheer thickness of the stone walls. Any higher than this, any building would have collapsed by its own weight.

The Philadelphia City Hall was actually the tallest building, period, in the early 1900s when it was constructed. 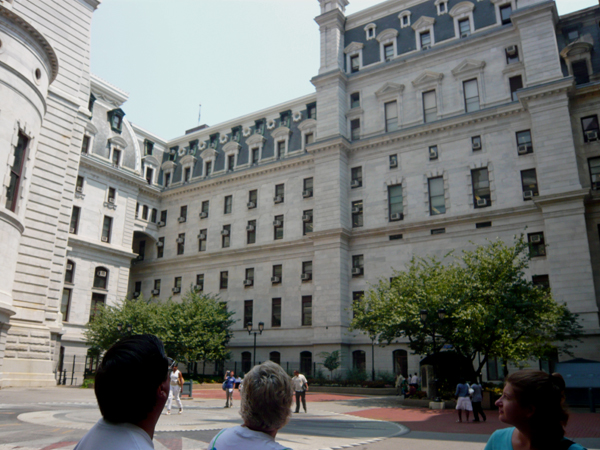 Despite this being over 100 years old, it is still very much a working building. You would find it hard to believe but within this relatively small space, there are over 700 rooms in all, making it one of the largest municipal buildings in the world even today. 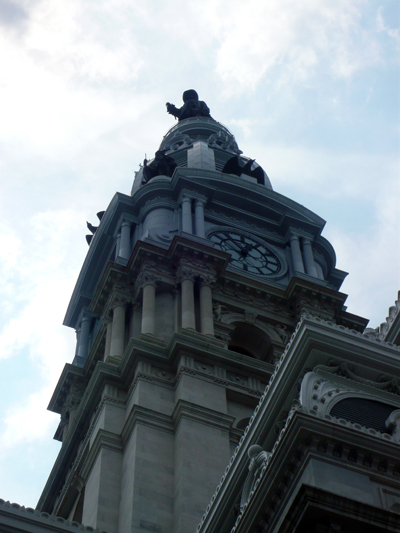 The total height from bottom to the top of the statue of William Penn is almost 550′. I bet you can bet at least the contribution of William Penn to Philadelphia, PENNsylvania. He founded Philadelphia and that statue is the highest adorned statue in the world. 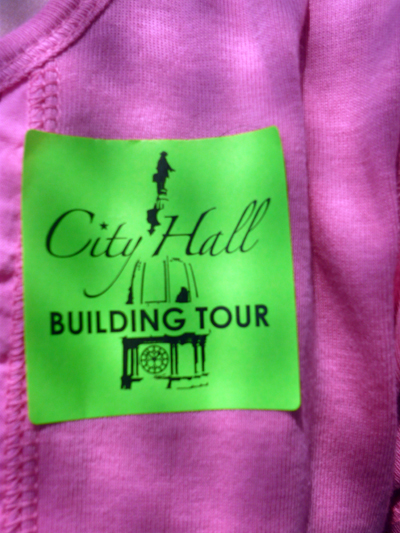 Not many people know about this but you could actually book yourself a City Hall Building Tour. It is but far the best tour we had so far because we were shown to almost every nook and cranny of the City Hall. END_OF_DOCUMENT_TOKEN_TO_BE_REPLACED

The American flag is best well known as the Stars and Stripes. At times, it is also known as Old Glory. It is the best known flag in the world…

The Philadelphia Museum of Art is one of the largest art museum in the US and is certainly a world class one at that. The main museum building with it’s imposing facade was built about 80 years ago. They have a few other buildings, including the Rodin Museum that collective is known as the Art Museums. 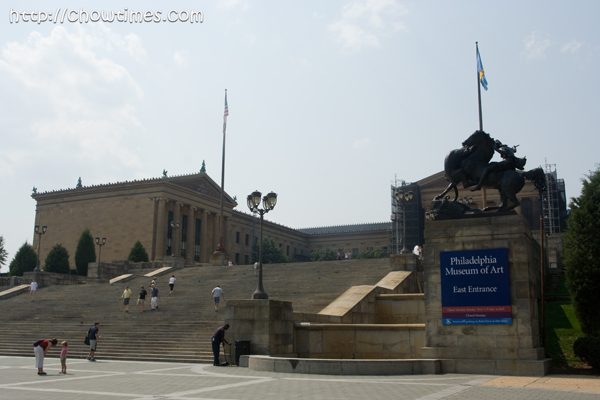 The Philadelphia Museum of Art is perhaps best known for the wide steps leading to the front entrance. This is where one of the most stirring musical score was shot on the 1970s movie Rocky. I bet if there is one image you remember from the movie is where Rocky raced to the top of the stairs in one of the more triumphant pose ever. 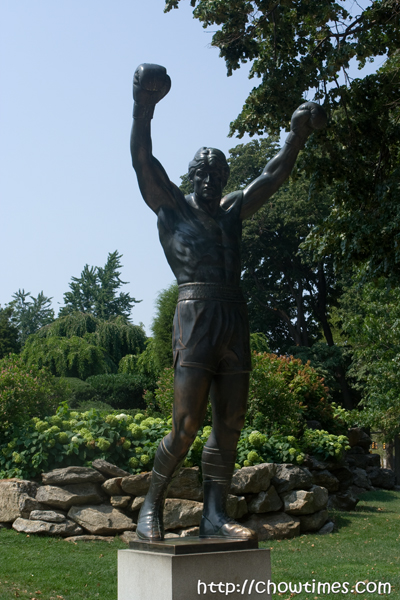 The Art Museum put up a statue of Rocky Balboa at the foot of the stairs. Needless to say, there were hoards of tourists coming here to take the pictures of the statue. 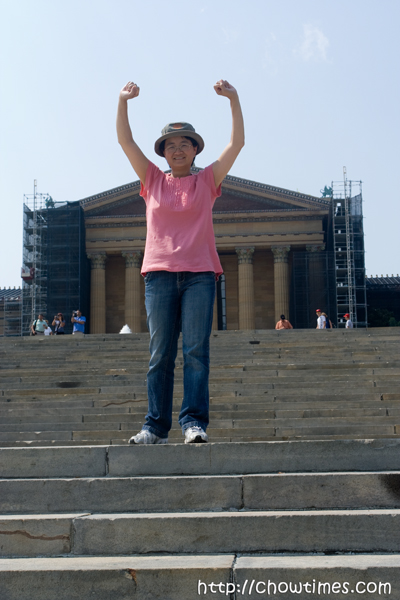 And of course, a lot of goofy tourists also had the obligatory picture taken at the top of the stairs in boxing poses.

[youtube https://www.youtube.com/watch?v=MR6FXpaECY8]
Contrast Suanne’s pose with the real clip above. 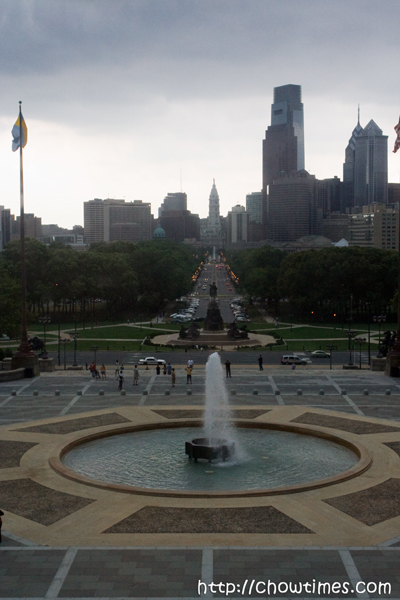 The view from the Art Museum is one of the most beautiful view of any city. It looks directly down the Benjamin Franklin Parkway right into downtown. 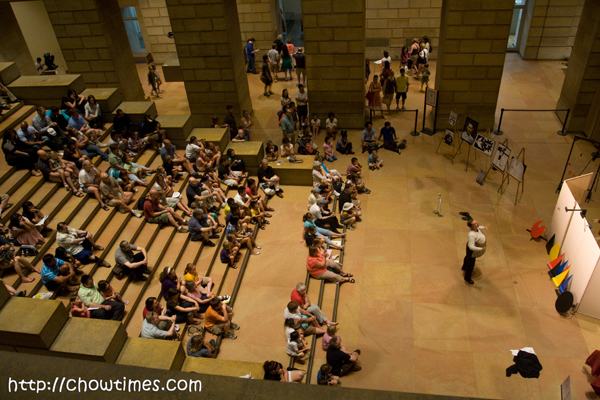 When we were there, it was “pay what you wish” day. Normally it would have costs $14 per person. We dropped $10 for the both of us.

There were also performances inside the museum. We did not quite like it but took the opportunity to just take a seat on the steps like everyone else. There is a serious lack of seats in this huge museum. 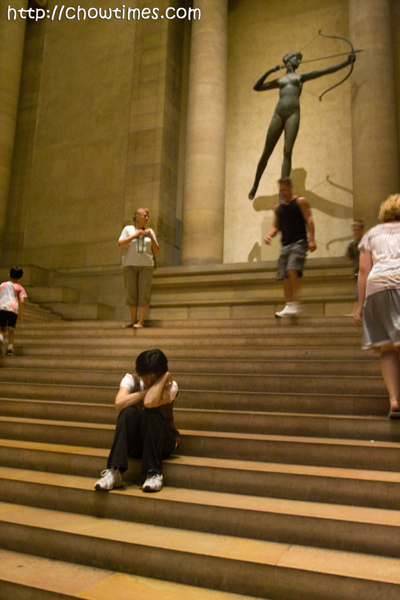 Well, Suanne fell fast asleep. When the show was over, everyone got up and Suanne continued sleeping. Gosh I could never sleep like that. So, I did not stir her up and left her to sleep for a few more minutes. He he he … people were walking up and down the steps and was wondering what this lady is doing sleeping right in the middle of the busy steps. Suanne got mad with me for not waking her up. I admit … I am wicked but she was so cute sleeping right in the middle of the busy central stairways.

Alright … boring pictures of the art works if you click “read more” below:

END_OF_DOCUMENT_TOKEN_TO_BE_REPLACED

Around the area called the Independence National Historical Park are many buildings. Some are small and others, like the Philadelphia Bourse are large “modern” multi-storey buildings. 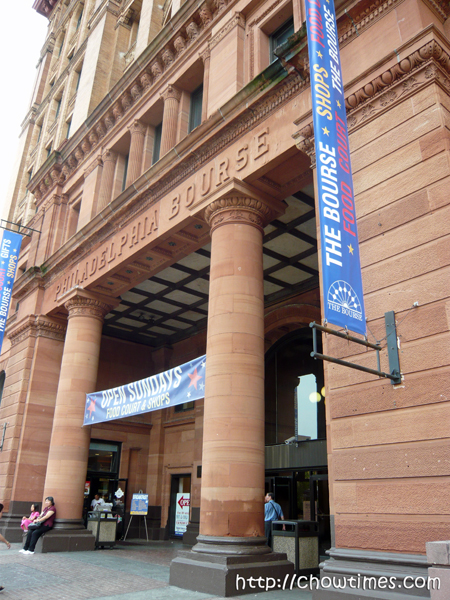 The Philadelphia Bourse was the first commodities exchange in America. Today, it is just an office building and also a place where tourist had food in their visit to the Independence National Historic Park. 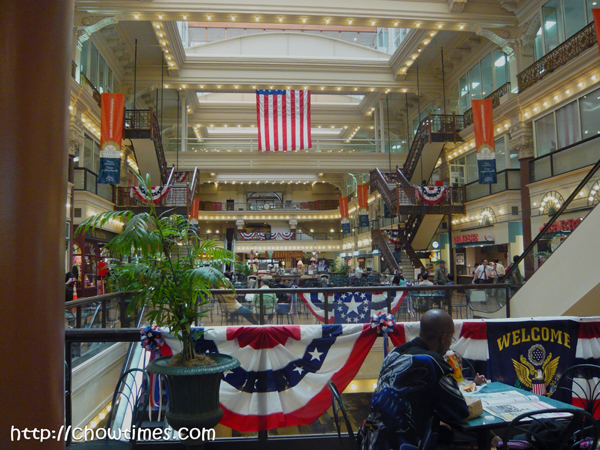 They have a good variety of choices with the Box Lunch Program where for a few bucks you can pick up burgers, sandwiches, fried chickens and almost every kind of take aways you could think of. 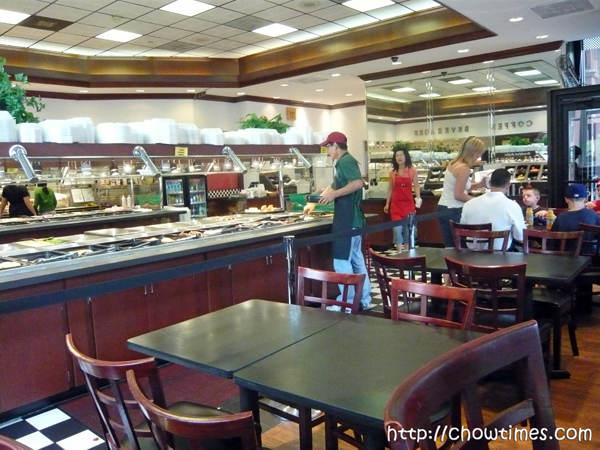 We went to a sit down place called the Philly’s Gourmet Cafe. END_OF_DOCUMENT_TOKEN_TO_BE_REPLACED

The little building below used to be called the Pennsylvania State House. Today, the unassuming build is now known as The Independence Hall. 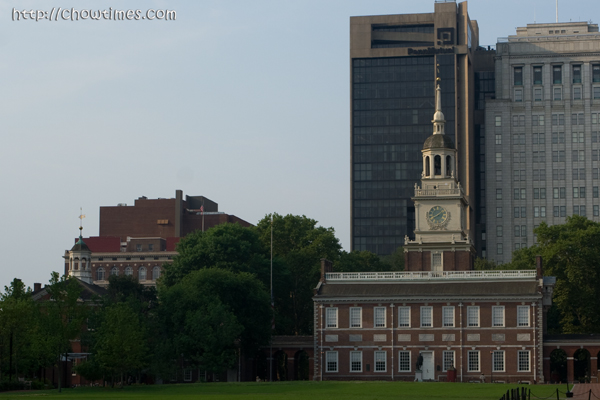 It is in this building that two of the most important document of the United States were signed. The two documents are the Declaration of Independence and the US Constitution. 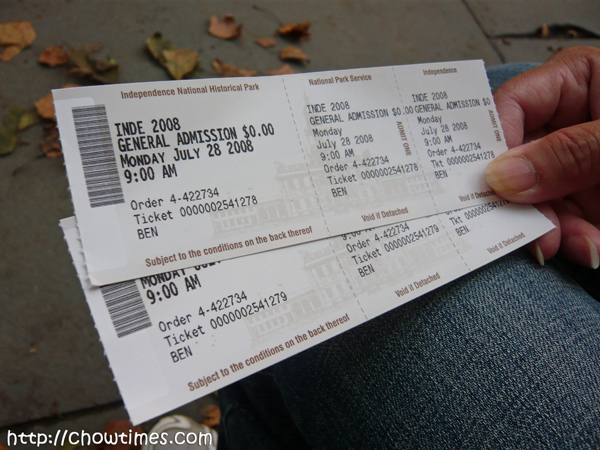 To visit the Independence Hall, you need to apply for the tickets. We applied for it online prior to leaving home. It’s easy to do that and in the interest of saving time, you should also apply for it before you go. You are allotted a fixed time to report for the guided tour and the passes are named. 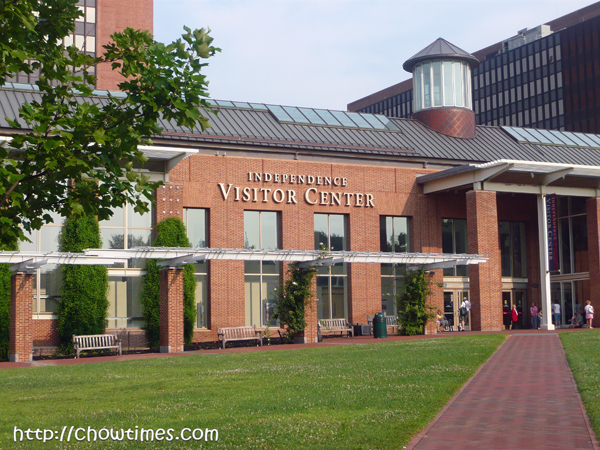 Despite having applied (and given the time), we need to still pick up the passes at the Independence Visitor Center. END_OF_DOCUMENT_TOKEN_TO_BE_REPLACED

If you are in Philadelphia and you want to visit just one place, you should go to the Independence National Historical Park. This is where the events of the independence of the US occurred. This place is called the Independence Mall. 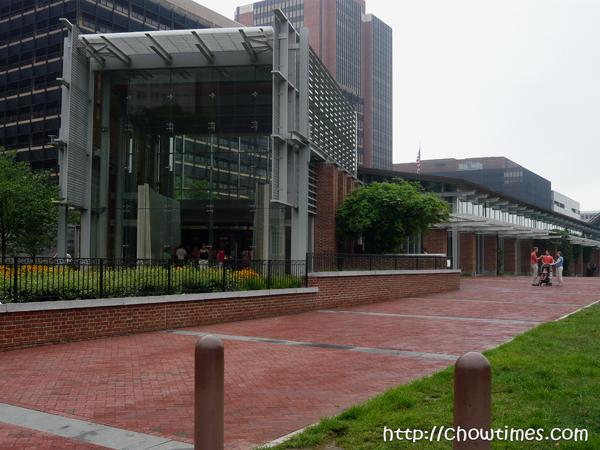 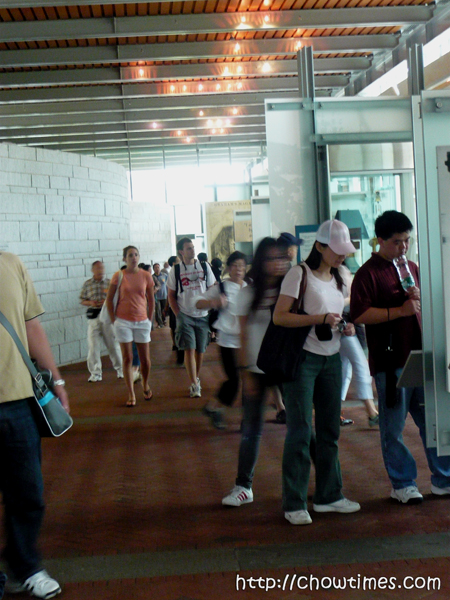 It is actually quite a large building considering that the purpose of the building is just to house the Liberty Bell. Everyone is subjected to security checks from one end of the building. END_OF_DOCUMENT_TOKEN_TO_BE_REPLACED

Updated: 27th Dec 2014; This restaurant is closed according to Urbanspoon.com. In the past week we were in vacation, we see quite a lot of Potbellies. There was one just…

As usual, she being a super nice person, went along with my choice … but …

… we had absolutely no idea how difficult it was to walk from the Benjamin Franklin Parkway to the Eastern State Penitentiary. On the map, it looked like it was a short walk but we did not count on the climb … and in searing mid day heat too. Suanne complained about my great idea as she huffed and puffed all the way up to where the prison was. 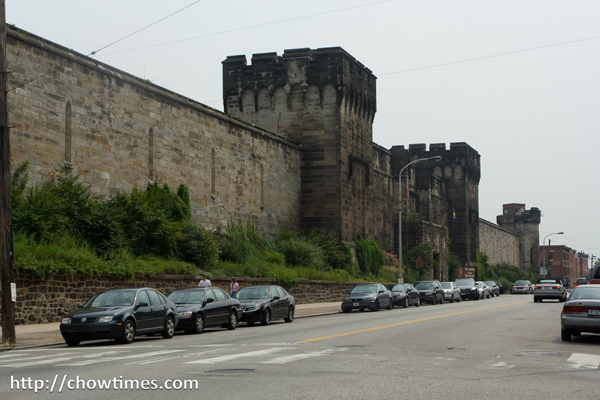 After a 20 minute slow walk, we thought the worse was over when we saw the prison walls. Well, the worse was yet to come. When Suanne is upset, I better keep quiet. He he he … I love the way she gets mad … sometimes, not always. 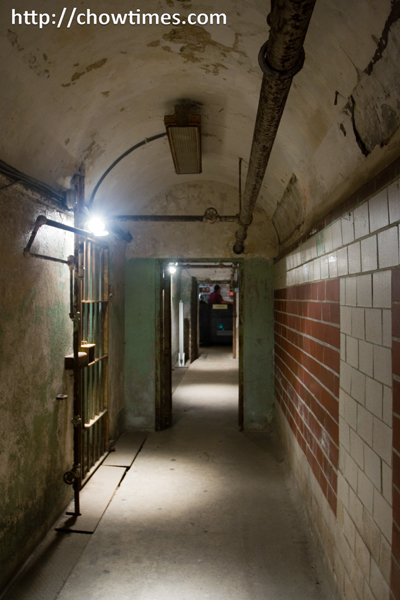 It was worse because this freaking place does not have air-conditioning. But of course, right? END_OF_DOCUMENT_TOKEN_TO_BE_REPLACED

OK, here is another theory I have about great cities. You know, there are many things that any city worth its salt must have. Among others, they must have stadiums, public libraries, concert halls, art museums, airports, universities. Cities spend a great deal of money acquiring these infrastructure and they cannot declare that they have arrived until they build them. 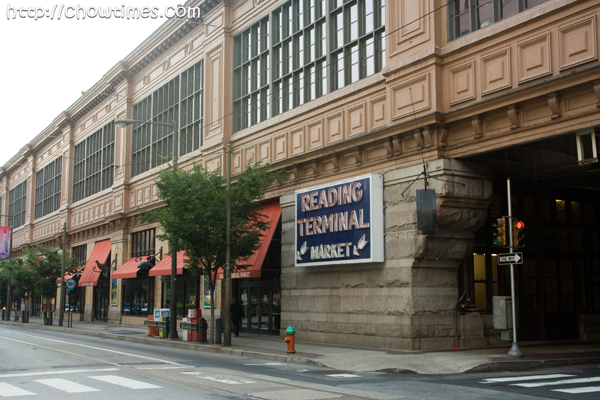 One of the must-have for a city is a public market. Seattle has its Pike Place. Vancouver has it delightful Granville Island. Every city has its own Public Markets. Public Markets are always a great way to experience the culture and food of the city they are in. The first place we headed to for breakfast in our first morning was the Reading Terminal Market. 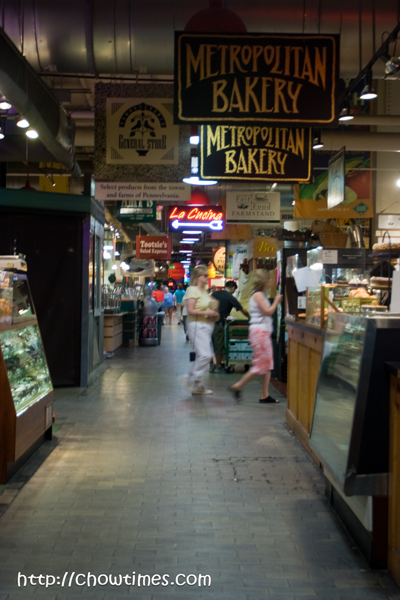 The Reading Terminal Market used to be a train terminal, hence the name. Today, it is a food bazaar of sorts. For foodies, and especially out-of-towners, you should check this place out. You can find all sorts of regional delights and even Amish food here. However, the Amish stores were closed when we were there — they only open on certain days of the week. 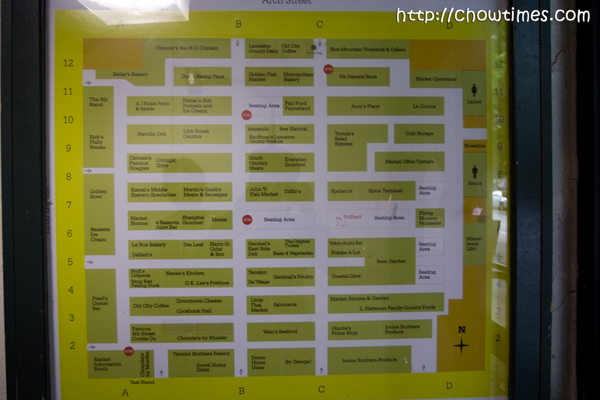 Suanne and I were quite bewildered roaming the entire place. There are many stalls selling food. In the middle is where you find tables. 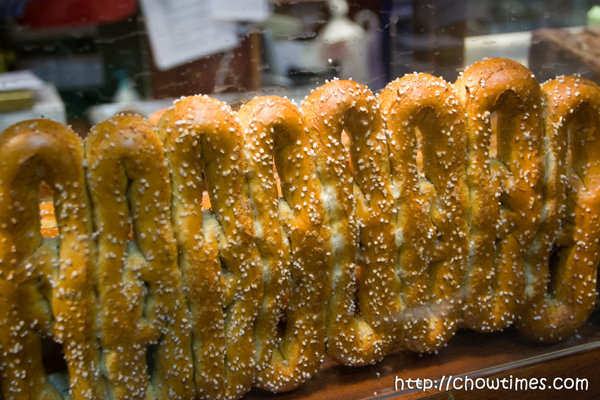 We got some soft pretzels. END_OF_DOCUMENT_TOKEN_TO_BE_REPLACED

Although we had the use of the car, we left it at the hotel during the few days we were in Philadelphia. Philadelphia, particularly the downtown core and the touristy areas, are not big. Even the layout of the city is simple and is clustered along two streets – Market St and Benjamin Franklin Parkway. 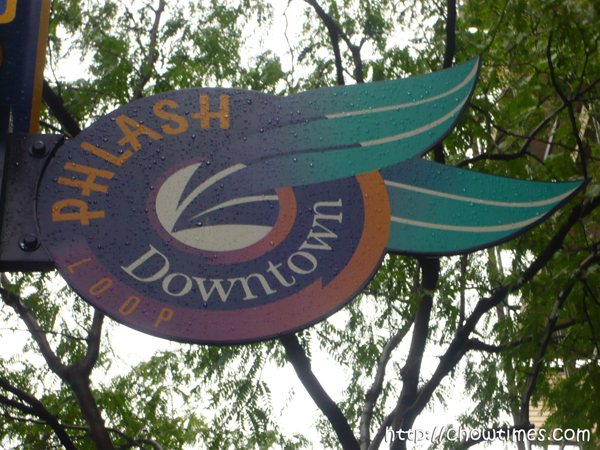 Philadelphia is pretty flat and is a very walkable city. There are signs all around the city with maps and indication of walking times in the surrounding areas. It is pretty neat and have never seen this simple idea in any other cities I had been to. Vancouver could implement this easily.

The areas are color coded too. That makes it easy for us to quickly pinpoint our location. 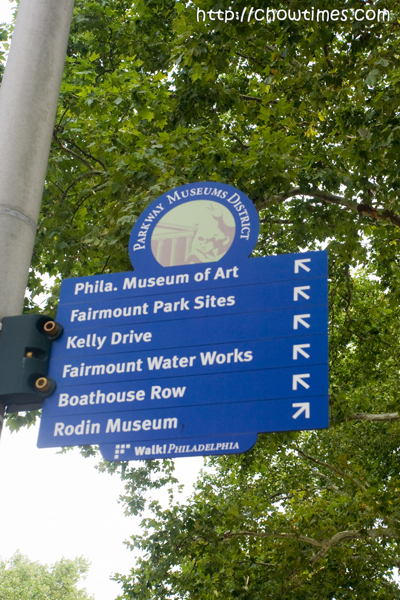 There are also clearly marked directional signs. You can NEVER ever get lost in Philadelphia. Generally, almost everything is located either to the west or to the east.

The distance from the eastern part of the city to the western part is about 2.5 miles. END_OF_DOCUMENT_TOKEN_TO_BE_REPLACED

Continue Reading Philadelphia: Getting Around