I never were quite sure how the words like Tsim is pronounced. If this Tsim word is similar to Tsim Sha Tsui (pronounced as Jim Sar Jui), then Tsim Chai Noodles would be pronounced as Jim Chai noodles. Any Cantonese out there who can confirm this?

Arkensen was in a camp at Golden Ears that day we went to Tsim Chai Noodles. So, it was just the three of us (Nanzaro, Suanne and I) who went out for supper. We don’t normally go out for supper but since we had “dinch” (or was it “luncher”) that day, we did not get down to dinner until later at night.

All the years we were in Richmond, we had visited almost every restaurant around that neighborhood around the Richmond Public Market but this is one we had never stepped our foot into before.

Tsim Chai is very much a Cantonese place and I do really think that the owner is from Hong Kong. My impression is that these type of restaurants are the “first wave” of Chinese restaurants … you know, they are opened before 1997 when HK reverted to China rule and lots of Hongkongers came over to Vancouver. Today, most Chinese newcomers came from Mainland China (i.e. Mandarin speakers).

Anyway, since we did not want to eat that much, we decided to just get two dishes of noodles to share between the three of us. I love beef tendon and got a bowl of Beef Tendon and Wonton Noodle in Soup. The soup is quite fragrant and unique in that it came with a bit of dried tangerine peel. This bowl costs $6.25.

I don’t know what is the right name to call this. I would translate this to chili oil. You see a lot of this on the table in Chinese (Cantonese only?) restaurants. Sometimes, this comes in a container with something like 90% oil with 10% chili! We always drain out the oil … but question … do people normally take the oil too? *Shudder* too much artery clogging oil to me.

Another thing I could not understand is that they do not normally provide one of the mini saucers to put this chili on. We normally use the soup spoon for this. Some Chinese restaurants provide the mini saucers, some don’t … I never knew why.

Anyway, Nanzaro digs this stuff. He can easily take two spoonful of that in a sitting. It seems that this chili oil is some sort of a specialty in Tsim Chai Noodle. They proudly display and sell bottles of these on their counter. I think it was at $5 a bottle.

Nanzaro ordered the Fried Rice Noodle Singapore Style which is categorized as mild spiciness. The waitress is surprised by Nanzaro for ordering spicy food — they all do. Nanzaro really likes spicy food which is kind of uncommon for someone his age. Arkensen on the other hand is completely opposite … he just can’t take spiciness.

Total bill came up to $18 including taxes and tips. I recommend this place. It’s easy to find, lots of parking, service is quick, the price were pretty standard, and most importantly, the food is pretty good. They are located in the strip mall just across the road from the Richmond Public Market … you won’t miss it.

Opens Monday to Sunday from 11:00 am to midnight.

Here is the menu of Tsim Chai Noodles … click on image for larger image: 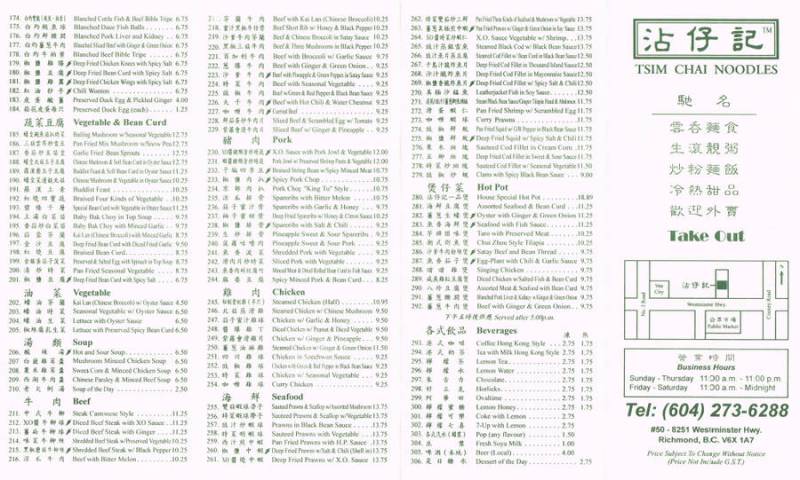 Ebisu Japanese Restaurant on No 3 Rd and Ackroyd Rd, Richmond