Oh, did you guys know how long was the border wait last weekend? It was unbelievably long … 3-5 hours south bound. We had been going south for our shopping at least once a month since the Canadian Dollar reached par with the mighty USD. However, we had been somewhat lucky not to be caught up in lineups over 1 hr.

A couple of months ago, we stopped by Arby’s in Bellingham. Arby’s is struggling in Canada with just a handful of outlets in BC. We like Arby’s and used to go often for their Roast Beef sandwiches when there was an outlet in Richmond. It’s closed a few years ago but we still remember having the sandwiches almost once a week.

We got the French Dip and Swiss Toasted Sub Combo for $6.85. The combo included some fries and a soft drink.

We prefer toasted subs. Some people told us that the reason subs were toasted was because it’s a way to hide the fact that the subs were not freshly baked. Regardless, we prefer it toasted.

This one you should try. It has thinly sliced roast beef and Swiss cheese in between a warm toasted ciabatta roll. Dipping it into the hot savory au jus takes the flavour to a new level.

The fries was OK. We get a choice of either curly or homestyle fries. What we love most is the dips. There are four different types available from the condiment counter. 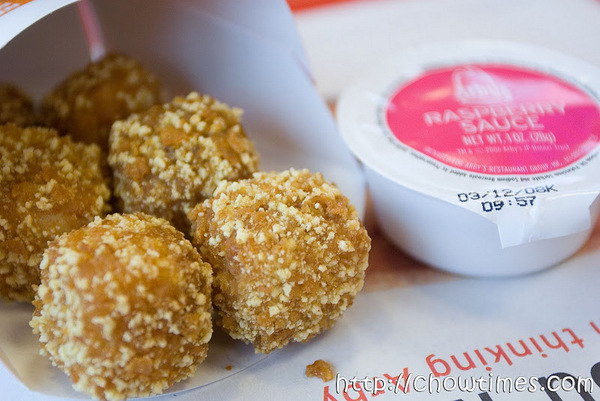 Suanne will do anything for cheesecakes. Arby’s has Cheesecake Poppers which costs $2.61 for six small pieces.

More dips … for the Cheesecake Poppers, it was the Raspberry Sauce. The poppers were quite good … it was very crunchy on the outside and soft, creamy and warm inside.