Of all the memorials on the National Mall, the Vietnam Veterans Memorial is perhaps the most controversial of all. Just might as well … as the US suffered it’s only defeat in a war with pulled out from it’s involvement in Vietnam without achieving its objectives. The US got involved in Vietnam to stop the march of communism from China down to South East Asia. However, the country used the wrong strategy to fight the communist north and thought that sheer firepower will ultimately win the war.

The Vietnam Veterans Memorial is actually made up of three sections … the Three Soldiers sculpture, the Vietnam Women’s memorial and the most famous of all the Memorial Wall. The Memorial Wall is made up of two walls gradually sunken to the ground from one side and rising from the other.

Believe it or not, the Vietnam Memorial is designed by a 21 year old Arts student. You see, when they organized a competition for the design of the memorial, they made one decision … and that is all designs are to be identified by a number and the artist name is not revealed. It so happened that the design of the young artist was chosen over many other big names. Many believe that this design would not have been chosen if the artist name was made known.

The design of the Vietnam Memorial is very symbolic but controversial. In the beginning, not many people is willing to accept the design as they deem it to be not traditional enough as a memorial. The bickering went to and fro until a compromise is made — and that is they will include an additional traditional memorial to the Memorial Wall. The addition is called the Three Soldiers.

The Three Solders are designed to depict a white, black and Hispanic soldier who fought side by side during the war. The artist of the Memorial Wall was so incensed with the addition of the Three Soldiers that she refused to attend the dedication of this memorial. 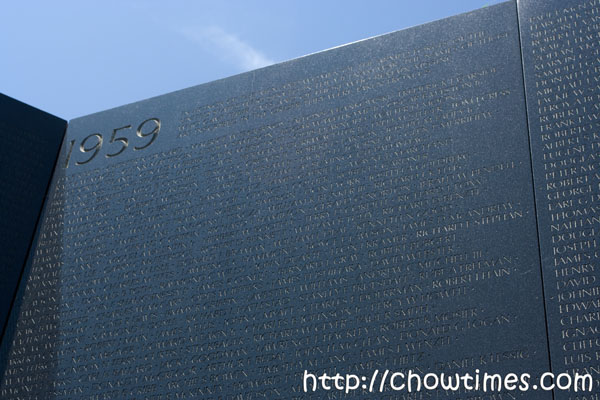 On the wall are the names of over 58,000 Americans who were killed or missing in action during the Vietnam War. The names are etched in chronological order according to the date of death. The first name started in 1959 from the left and ends in 1968 on the other end.

There are directories in the parks that you could look up the names on the wall. Since the names are sorted by death chronically order, looking for a name out of 58,000 would be quite impossible. From the directory, you’ll find the panel where the name appears. 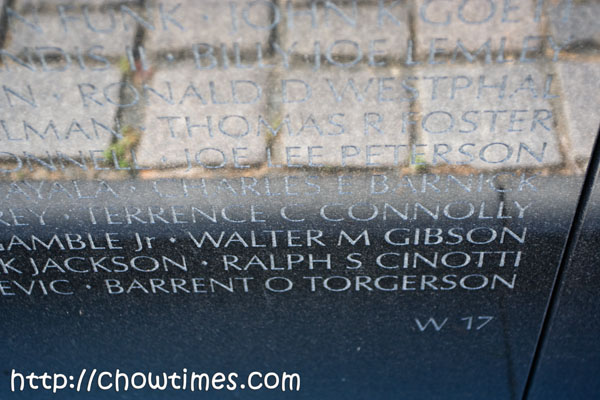 For instance, the above is Panel W17 which says that it’s on the west wall and panel 17. There are a total of 70 panels in all. 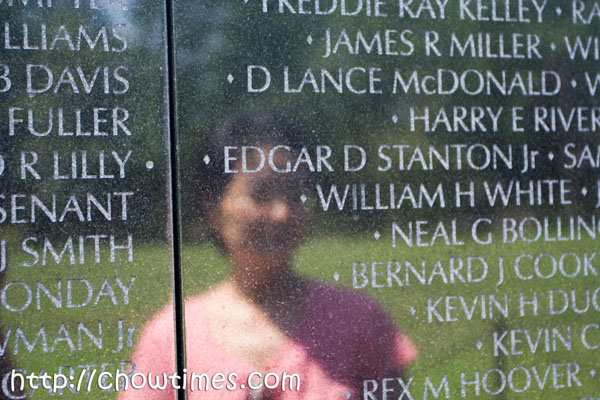 The names are sandblasted on a type of highly reflective black granite — almost like a mirror. It is chosen because the reflection sort of bring the present and the past together for those who stands in front of the wall.

There are only names … no ranks are shown.

As I mentioned, there are two walls … one points to the Washington Monument and the other points to the Lincoln memorial. It tapers off towards both ends and that symbolizes a gaping wound that the nation had to endure. One other interpretation says that from one end to the other symbolizes from the opening of a wound to the closing and healing of it.

Whatever they mean, the memorial is simple but moving. Everyone walks the path along the wall with silence.