We had wanted to go to Luzzo’s for brunch. Luzzo’s was supposedly considered as one of the best pizza places in New York City. We made it all the way to there only to find out that they won’t be opened for another hour. Not wanting to waste time waiting for an hour, we decided to just pop over a bagel place across the street.

We just randomly went into this place called David’s Bagel. From the outside it looked very promising because they have piles of delicious looking, sweet smelling, freshly made bagels. Also, I wanted Suanne to try real New York bagels. 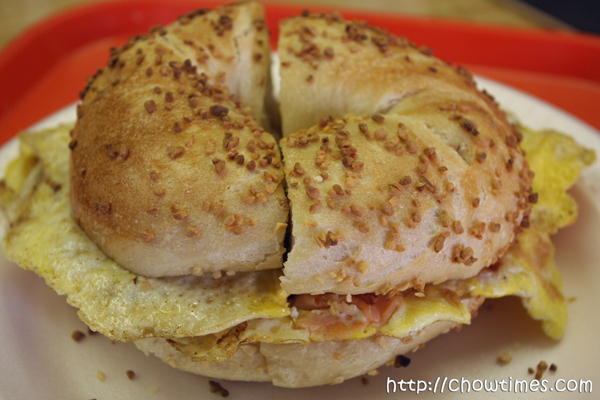 We decided to just share a bagel between the two of us. The plan was to eat a little here and there but in a few places. The choice was excellent … the bagel we had was as good as it could get.

What we had was the Lox Onion Omelet in Buttered Garlic Bagel. Sounds delicious huh? It was. The bagels were made on the premises and quite a lot of people walked in to buy them to take away. I had never come across bagels like this in Vancouver. This one costs $5. Not bad.

This is kind of weird finding this in a bagel joint but their drink special of the day was the Thai Iced Tea. It looked too orangey but tastes exactly like the HK-Style Milk Tea we find in Vancouver. $3.67 … pretty expensive, I say.

After that meal, we scampered all over the city … like headless chicken. We bounced from one place to another. We visited Chinatown, and Little Italy. We also made our way to the Grand Central Station where we also got ourselves the Fried Oyster Po’Boy that I enjoyed so much the last time I was in NYC. Since I had already blogged about it, I’ll just leave the link here if you so wish to read about it.

We also got ourselves some Italian Ice (or at least I think it’s what it’s called) from a street vendor. It was nice for a hot day but it was expensive if you ask me. The lady charged us $2 for this. I am not sure if she over charged us because Suanne and I looked every bit a tourist!