Updated: 24th Dec 2014; This restaurant is closed according to Urbanspoon.com.

Christina and ET invited us to try something new … a meal they enjoyed a lot and thought of going there again. We hardly had any vegetarian meals before and thought it would be a great idea to check it out.

Saravanaa Bhavan is a popular South Indian Vegetarian restaurant. I checked with some of my East Indian friends and they all swear by the food here. Saravanaa Bhavan is located on Broadway, just east of Oak. I was told that this is where the Broadway Phnom Penh restaurants once was.

Their premises is really clean. We were there early. That is why you see that it was quite empty. By the time we left,the place was bustling with customers. 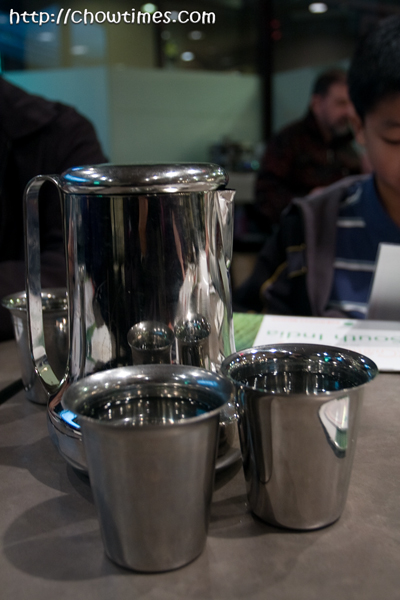 Service was superb. Being new to South Tamil cuisine, we obviously asked a lot of dumb questions. The waiters were very keen to help us with our questions.

They came by promptly and served us water with stainless steel cups. It felt kind of odd at first drinking from the cups.

The Lasi ($3.50) came in two flavours … salted or sweetened. Salted sounded more exotic and so Salted Lasi it was. Well … it came and it looked like some thickened milk. The taste … it was sour and salty and frankly, not meant to be rude or what, it tastes like … puke. It was not my kind of drink but I finished it off nevertheless … a sip at a time. Actually, the first sip was the worst but it gradually was not so bad after that. I tried the Mango Lasi ($3.75) … and yes, it was like a million times better. 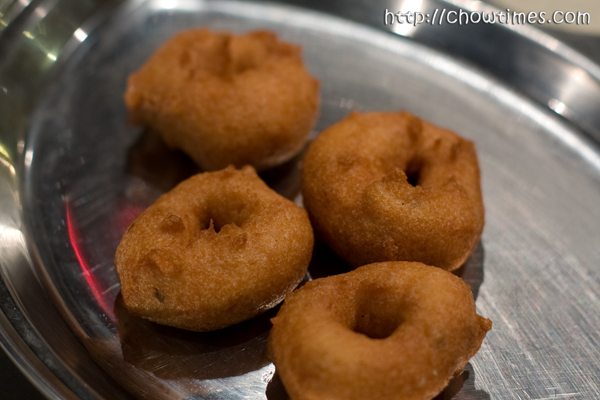 I consider the Medhu Vada ($5) the Indian version of donuts. There were four pieces of it. It is fried lentil donuts and served with coconut chutney and sambar. Unlike the normal donuts, this one is quite salty. 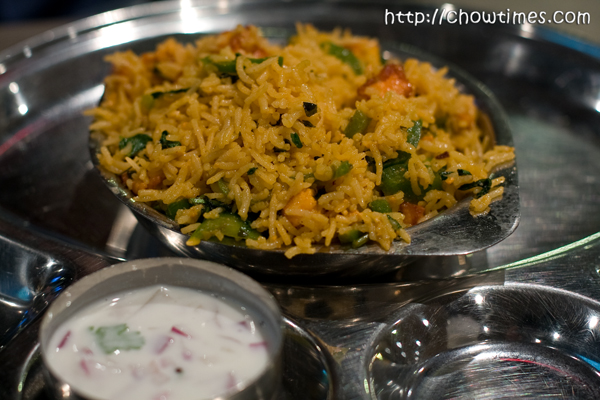 Arkensen and Nanzaro could not find Salted Fish Fried Rice on the menu. So, they ordered the next thing closest to fried rice. They had the Paneer Biryani ($9.25). For all I know, Paneer is the Indian version of cheese … I expect to see some cheese cubes or bits in it. The boys liked it. 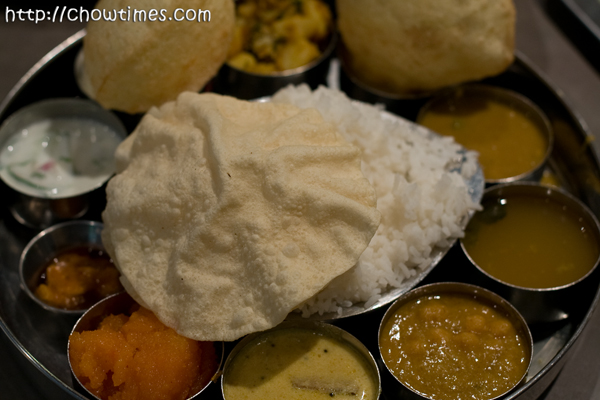 My choice was simply their version of “The Works”. It is simply called the Saravanaa Special Meal ($9.95). It came with 10 small tiffins. Collectively, I think this is what they call a Thali. 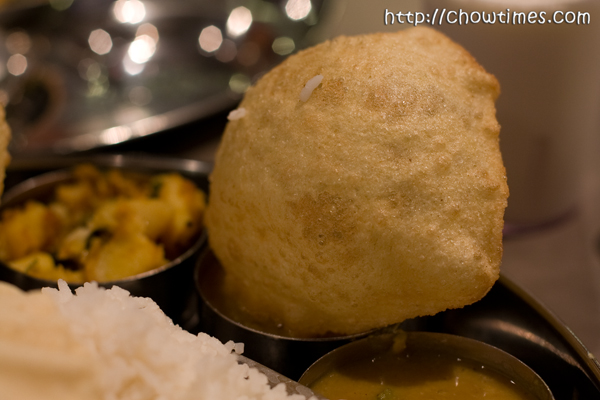 The dish included 2 pieces of Poori. It was some kind of soft, hollowy, airy, pillowy, bready, thingy. One thing you must do with this is to poke it with your fingers. For the life of me, I can’t think of any playable food like this.

I had absolutely no idea what all the food in the individual tiffins are. I would not even want to attempt to know them because I could never remember it. Anyway, the menu says that they are “Channa Masala, Rice, Sambar, Rasam, Special Kulambu, Two Vegetable Curries, Raitha, Curd, Appalam and Pickle”. *shrugs*

Some of them are brothy … 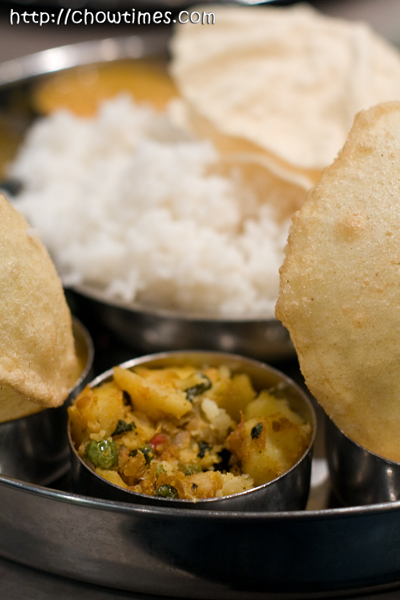 … some had lots of spices in it.

My fav was the orangey thingy. I had a spoonful and by the time I went round the dish and came back to it, it was all gone. I did not realize Suanne had finished them off.

Suanne ordered the Kara Dosa ($8.50). It is a spicy rice crepe filled with a spicy stuffing and onions and potatoes. 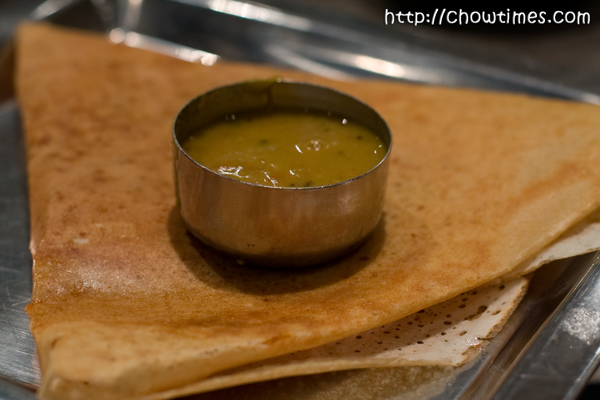 It was not bad … but could do with more fillings … like ham or bacon! 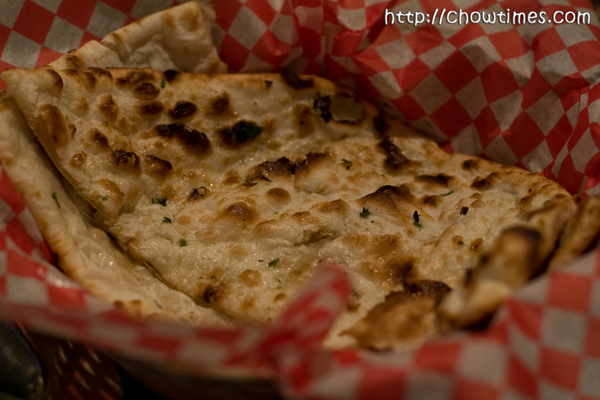 With curries, we simply had to have Naan. The Garlic Naan were served really hot straight from the oven. It was kind of oily but pretty good.

ET ordered the Chai which I thought was served very unique … very El Bulli’ish … you know, foamy and such. Suanne and I can never take coffee or tea for dinner because it keeps us awake the whole night. Our coffee intake cut off time is 2PM. 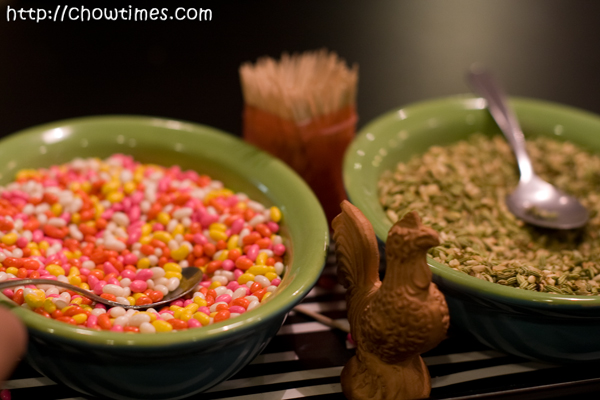 Our portion of the meal came up to $60. It was OK … just OK. Being “meatatarians”, it was not exactly a satisfying meal. The way Suanne described it is it is “Mo Yun” … that is Cantonese for “no kick”. I am sure Saravanaa Bhavan is a great vegetarian restaurant. 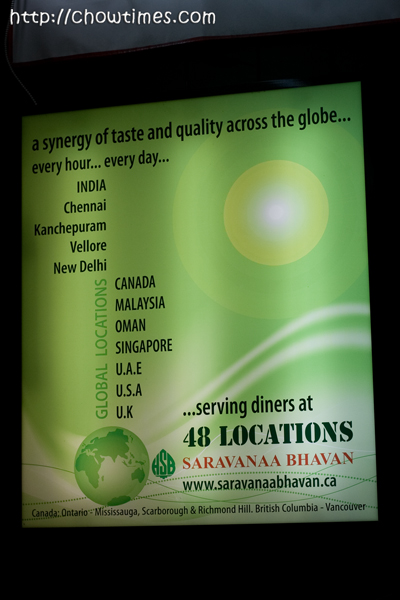 For what it’s worth, they have locations all around the world.