Suanne and I were invited by Amir, the Executive Director of the Greek Summer Festival, to the event to experience Living A Day The Greek Way.  Suanne and I had been having way too many invites these days but this was one event we could not turn down because we felt we had so much to learn. 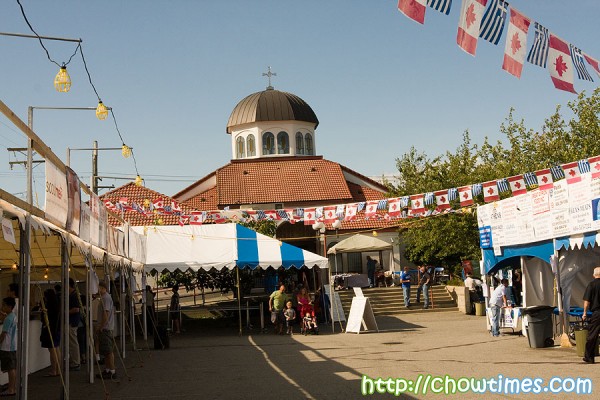 We met Amir and to our surprise, he had actually gotten the people behind the event together so that we could meet them.  Never in our imagination how much history there are behind this annual event.

The Greek Summer Festival had started as a one day event 23 years ago organized by the Greek Orthordox Community of East Vancouver.  The event’s main goal is to raise funds (this year they partner with Make a Wish Foundation) and to introduce to Vancouver the richness of Greek culture, traditions and FOOD!

They told us how this one day event grew from one-day event to an event that spans two weekends around Canada Day.  This year’s event runs from June 26th to July 5th.

George Economous was our host of the evening who was gracious enough to spend two hours that day to bring us around the place and showed us the event behind the scene.  He he he … Suanne and I felt like we were on a guided tour of Greece!  We were so intrigued by the stories we are hearing we decided to learn more before digging in to the food.  But since this is a food blog, I gonna share with you the most important aspect of this festival … FOOD … especially … 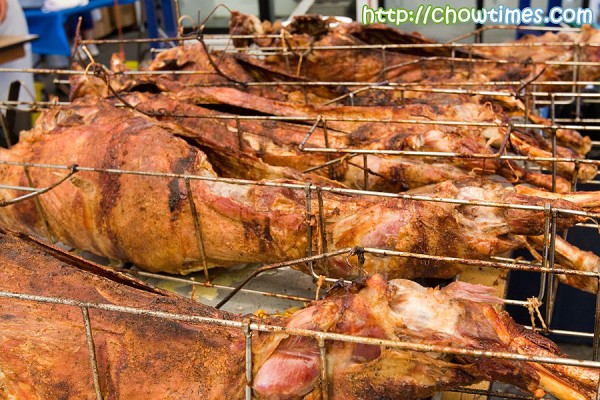 … LAMBS.   If there is only one thing we came away impressed, it was the lamb.  Being Chinese who generally finds lamb gamey, we ended up thinking of lamb in a much different light. 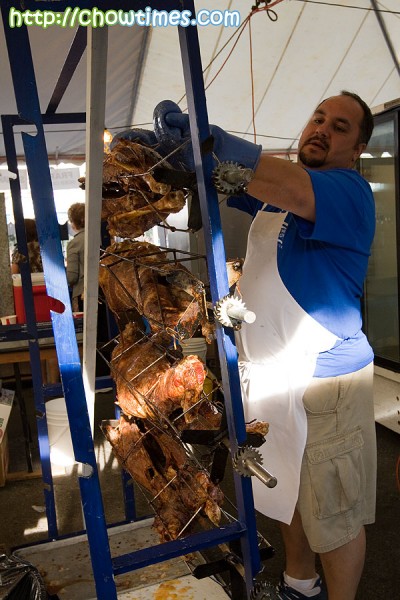 The Greek Summer Festival sold a whopping 465 lambs within 10 days in the festival last year.  This year, they are on track to break last year’s count and I am not going to be surprised.  We met George “The Real Boss” (the person above is George “the Host”).  George “the Real Boss” is the man behind these lambs since the inception of the Greek Summer Festival.  Boy, he sure has lots of stories to tell and BBQ burn scars to show too!! 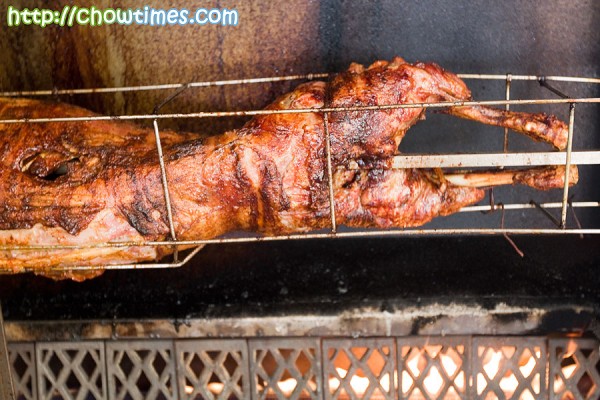 They used to do this by hand and using charcoal but today they have a whole row of rotisseries imported from Greece that slowly cooks this.  It takes four hours of slow cooking to make each.  They use the very best New Zealand lamb because of the tenderness of the meat and of the consistent size.  They tried to use local lambs but gave up because it was best only during Easter period.

They used to chop the lamb piece by hand.  It is impossible to keep up with the demands that they had introduced new ways and machines to do the job better and faster.

Many people actually come to the Greek Summer Festival only for their lambs.  People would drop by the festival on their way home to pick the lambs on the spit up by the kilo ($32) or half-kilo ($16).

Some people even order the whole lamb.  That is $185 and is more than enough for 20 people.  They will cut it to your choice.  Sometimes there are customers who comes in a group and order an entire lamb to feast at the festival.  That would be fun! 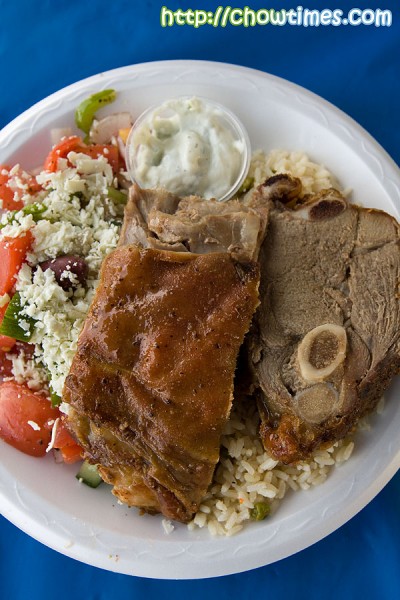 This is what Suanne and I had — the Lamb Dinner, Bone-In.  This is wonderful … perfecto in every aspect.

[Sigh … for those who can’t stand Suanne and I getting free meals … this meal is FREE.  Deal with it and get over it OK?  LOL!] 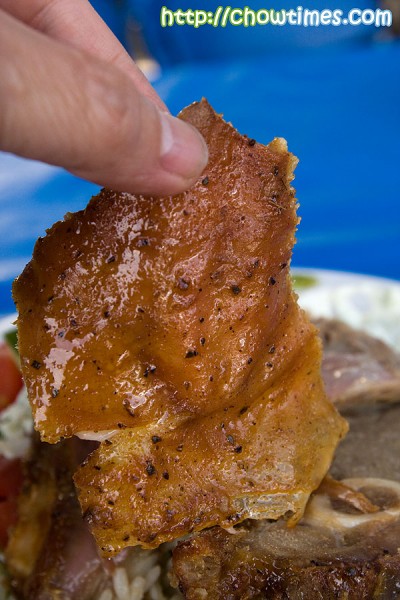 The crispy skin is sinfully delicious, mouth watering and downright dripping with fat!  In short, it was awesome.

Oh … the lamb was bigger than I expected.  For $15, this is bigger than a 8 ounce steak.  Thick and surprisingly juicier than it looks, the meat is tender and bursting with flavour,  I actually wanted another piece but was too afraid to ask for another from George!!  I ate with my hands … nothing beats grabbing this with my hands and tear it with my teeth.

If only I had a real plate with me, I would do what a Greek would do … smash the plate on the floor and shout “Opa!”  LOL!

We also had the Souvlaki Dinner ($13).  It came with two skewers … one pork and another chicken.  While it was really good, this really pales in comparison with the lamb.  Really.

Nothing is more Greek than Tzatziki.  I always think that Tzatziki is to Greek as much as Kimchi is to the Koreans.  They make almost everything fresh everyday.  The organizers do not believe in sacrificing quality Greek food in place of convenience.

Can you name the main ingredients of Tzatziki sauce?

Also made fresh daily, their salad is really good.  This is true Greek Salad … the way it is meant to be with chopped tomatoes, cucumber, red onion, and olives.  Oh of course topped with a true Greek cheese too — the Feta Cheese. 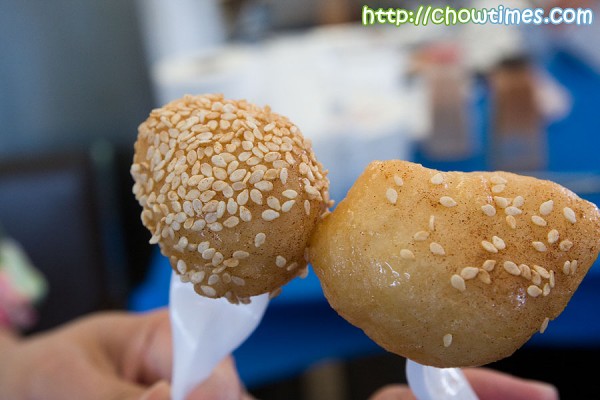 You gotta also try their Loukoumades.  This is Greek style mini donuts … light and fluffy, dipped in honey plus cinnamon and sprinkled with sesame seeds, they are absolutely delicious … especially when they are served warm and soft.  Let me tell you a tip … ask for this warm … you will thank chowtimes for that. LOL!

This is their most popular item besides the lamb.

We saw how easy they make this with the contraption they used.  I was too afraid to ask but would love to make them myself … looked easy.

Suanne wanted to try the Tyropita (Cheese Pie).  She likes cheese.  This one is quite OK to me.  The phyllo was flaky and nice enough (love picking up the crumbs!) and the filling is a mixture of eggs and cheese. 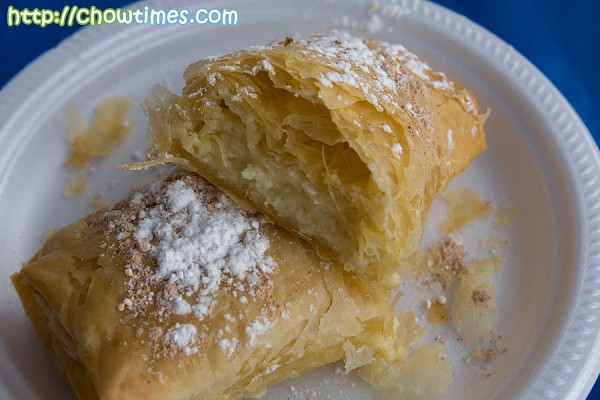 Now, the Bougatsa is custard wrapped in phyllo.  This one I like better than the Cheese Pie … because of the soft warm custard.  With the flaky phyllo and a liberal sprinkle of icing sugar, you can imagine how this taste like … right?

They make lots of food during the festival.  Pita is delivered fresh everyday (they don’t make this).

Check out their prices above.

Lots of seating is available.  I cannot help but notice that they actually dedicated more than twice the space to eating places than the food stalls.  So, getting a place to settle down to enjoy the food is easy and not stressful.  I remember some of the food festivals we went, the most difficult thing is finding a seat that is clean. 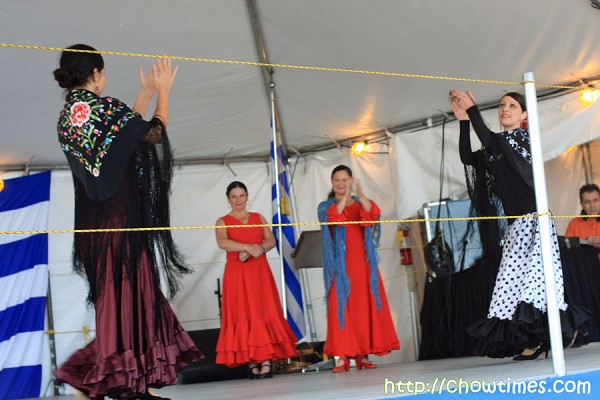 We enjoyed the live music and entertainment. We came away learning a lot of the Greek culture.  We were particularly impressed on how proud the Greeks are of their heritage and culture.  I still cannot figure this out completely … it does seem like their identity is centered around the recognizable Greek flag and their unmistakable blue-white colors. 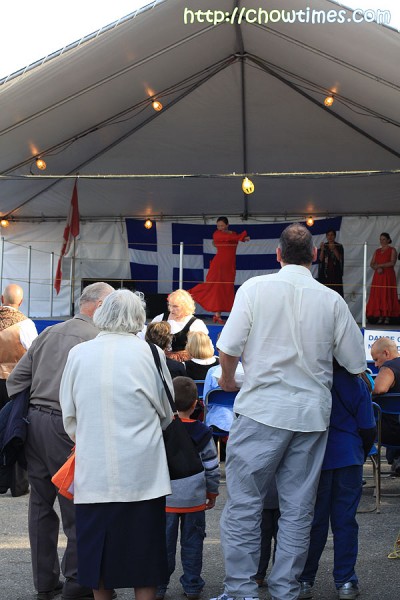 This is very much a family event.  With great weather expected this weekend, it would be a great idea to check the Greek Summer Festival and “Live A Day The Greek Way” as their theme of this year says.

Here is a little bit more of our tour around the event and the church.

The Greek Orthordox Community of East Vancouver is one of only three Greek Orthordox churches in Metro Vancouver. The others are in Kitsilano and Surrey. There are 400 people in this congregation. It is amazing to learn that despite its relatively small congregation, they had managed to organize an event of this scale every year.

We met the Rev Father Evangelos who showed us around the church.  Even though we are Christians, Suanne and I had never stepped into an Orthordox church before.  So, it was interesting to learn how similar the Christian Orthodox church is to contemporary churches and yet how different they are.  We learned of the place of iconography in the church, the holy-of-holies, altar, chantings and Byzantium music. 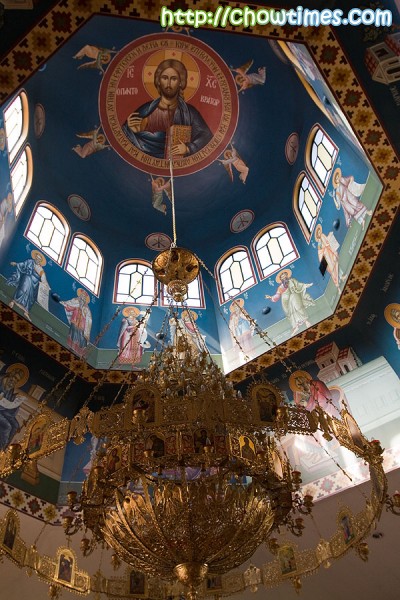 Hey …  Amir, George “The Host”, George “The Real Boss”, Rev Father Evangelos, George “the VP” … thanks for a great time that Suanne and I had.  You were wonderful hosts.  We will be back … every year … for your lamb!