Updated: 3rd Nov 2014; This restaurant is closed according to Urbanspoon.com.

Oh, this must have been a couple of months ago when we visited Cabin 5555.

That was when Suanne and I invited a few Friends of Chowtimes for a fun coffee tasting event in the neighborhood. Since many of the people are coming all the way to West Vancouver, we thought we also organize a lunch there. This being just a side event, the turnout was great. 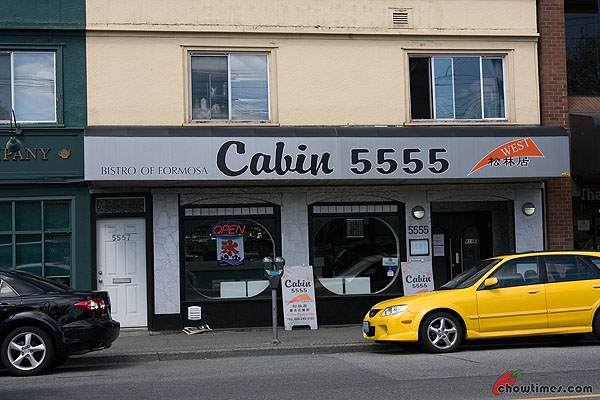 Cabin 5555 is a Taiwanese style cafe very much the likes of Corner 23, The One and Chill, to name a few. Part of the name is derived from the street address of the restaurant — 5555 West Boulevard. 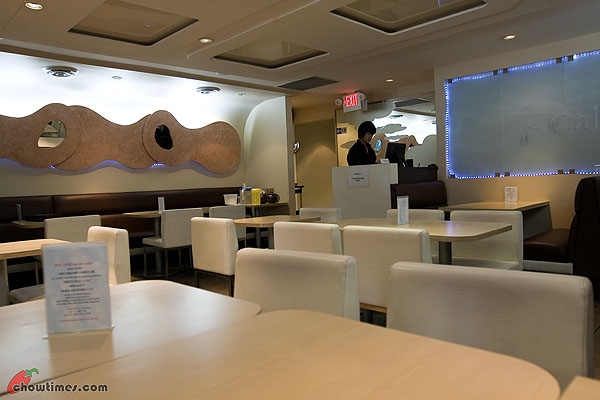 The other part of the name (the “Cabin” part), I guess is derived from the low-ceiling feel in the restaurant. The dining area is like half a floor up from the street level and the low ceiling does have that claustrophobic feel. I felt like I was in an airplane cabin.

The place is clean which is accentuated by the all white decor. The restaurant is quite busy even though you don’t get that from the picture above. We were there early before the lunchtime crowd came in.

Cabin 5555 seems like a neighborhood restaurant. I don’t think there are many people who will drive all the way here just to eat in this restaurant. Anyway, I noticed that they have free wifi here. We don’t see many of those in Chinese restaurants but then Cabin 5555 is in an upscale part of the city.

The menu is made of pretty standard Taiwanese favourites. You have bubble tea and all its derivatives at the back of the menu. Other than that, there are the usual appetizer, noodle, dim sum, hot pot, soup, fried rice, special meal, vegetarian and main dishes sections.

Big menu and peppered with lots of common dishes from Taiwan and in between there are some interesting ones. There were about eight of us for lunch that say. They left the ordering to me and Carol who lives in the neighborhood. Since some of them are not familiar with food in a Taiwanese cafe, we decided to pick a selection of simple Taiwanese food and some “adventure” food too. The dishes are meant for individual servings but we shared them.

Yeah … “adventure food” such as the Thousand Egg with Tofu ($5) above.

For me the century egg is a delicacy, but I know this is strange food to Karen. 🙂  She was game enough to try just a teeny-weeny bit of the egg white (or should I call it the egg black). She did not want to risk her health by eating the disgusting looking blackened egg yolk.

Yeah, I understand. This is an acquired taste and the Chinese have really weird tastes. Firstly, black mushy egg yolks are supposed to be beyond rotten and not fit for consumption. Secondly, egg white is supposed to be white and they are not supposed to be transparent. The rest of the world’s wisdom says that you just “transparentize” the egg white with chemicals just so that it looked cool. And no … they don’t soak the eggs in horse urine to blacken the eggs … that is urban myth.

But it tasted good to me *shrug*. And I don’t think I am about to die anytime soon eating it. After all, this had been consumed for thousands of years already by the Chinese and is considered a delicacy. LOL!

The other unusual thing is that this is a cold dish. The tofu is topped with bonito flakes and green onions. Oh, when Suanne is lazy to make real dinner at home, that is what she does sometimes at home (sans the century egg).

I thought that the Taiwanese Style Oyster Omelette ($6.75) was kind of weird looking. I was expecting a bit more eggs in it. After all, they did call it an omelette on the menu. Instead it is starchier than I expected. The sauce is sweetish.

Naw … not too good as far as I am concerned. I haven’t tried a lot of oyster omelette in Vancouver because they are all Taiwanese style. I guess not many people have tried the Malaysia style oh-chien which is more egg with a little bit of starch.

When in a Taiwanese restaurant, you got to order beef noodle soup. I asked for it to be mild-spicy in consideration of those who could not stand it spicy.

This one above is called Beef and Tomato Noodle Soup ($7.50). Is tomato common in Taiwanese beef noodles? I thought it just doesn’t go with something like a TBN.

The beef noodle is just passable. Certainly not in the league of … Lao Shan Dong. I like the beef a lot … it was chunky and has marbled tendons too. 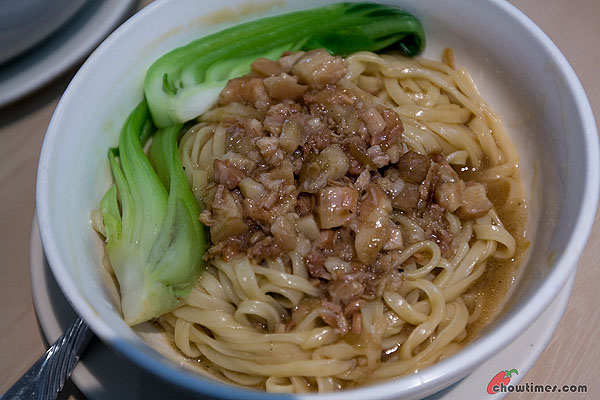 Although the Noodle in Pork Sauce ($5.50) is less complicated than the TBN, it has a nice flavour with a hint of star anise.

The Taiwanese Style Sausage ($5) was big and served with slices of raw garlic. It tasted sweetish and pretty good. I like the raw garlic pieces which I thought gives the sausage a bit of a different dimension to the taste. 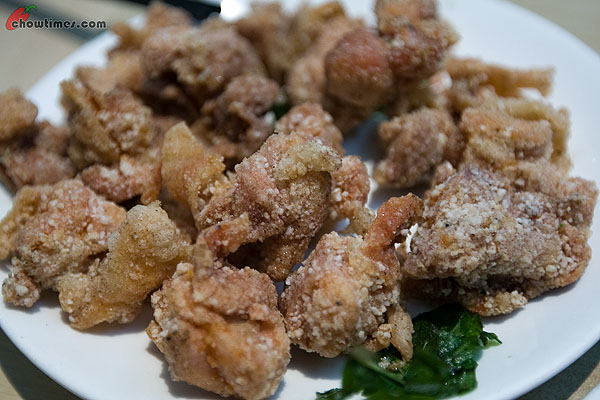 The Deep Fried Fish Cake ($5) looked a lot like fried yams at a glance. The outside has a nice crisp to it. Good finger food.

I wanted to show the attendees a hot pot dish. So I ordered the Chicken with Sesame Oil and Wine Vermicelli ($11).

This is an individual serving and not really meant for sharing. But we shared nonetheless. It is served with pickles, tofu, rice and mango jello on the side.

Suanne was telling everyone that this is the kind of dish that is usually eaten by woman during confinement because of the warming effect from the soup. Does anyone of you believe in that stuff? I don’t know I am skeptical but when Suanne was expecting she religiously follows these traditional Chinese advice.

The Sweet and Sour Fish on Sizzling Hot Plate ($9) was a disappointment. I wanted an “action dish” but it came without sizzling. They can’t do that! It is disgusting if it did not sizzle. So, I hardly touched it. 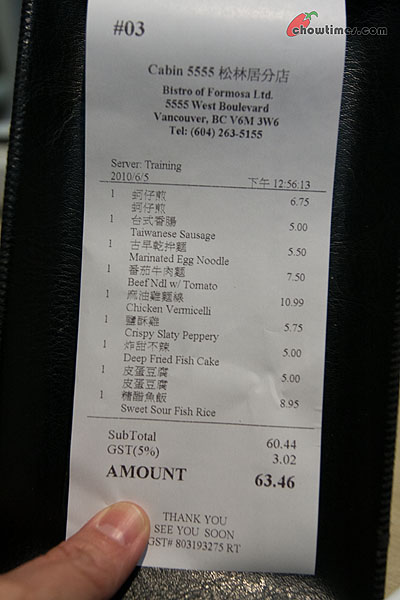 $63 for eight people wasn’t too bad. We did not order coffee after the meal for a reason. With that lunch over, we scurried over to the Vivo Gelato a short distance away for the fun coffee tasting where we get to try a cat-poop coffee, an Italian coffee and a coffee that Japan loved so much that they cornered the world’s market for it. More about it in the next post.