The theme for our third day in Barcelona is Gaudi.

In most of my conversation with friends who learned that we are going to Barcelona, the one word that very often comes up is Gaudi.  Gaudi is the celebrated architect in Barcelona.

His most famous work is the colossus and massive ambitious Sagrada Familia.  The Sagrada Familia is a Roman Catholic church which started building in 1882.  This makes it 120 years already in construction.

The Sagrada Familia (meaning Holy Family) is unlike any church you will ever seen.  It is jaw dropping just looking at the immense structure and the intricate sculptures. 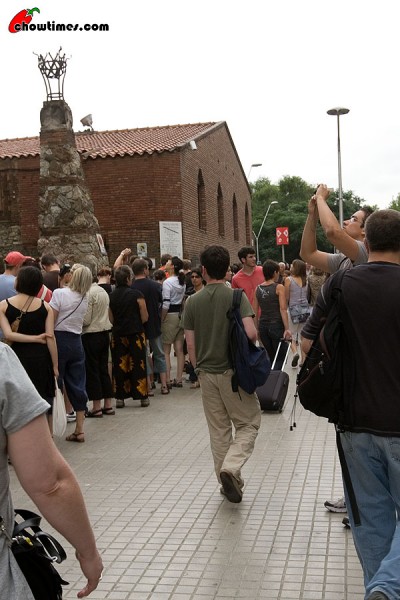 It was late morning when we got there.  You really need to time your visit because the Sagrada Familia is the most popular tourist attraction in all of Barcelona.

We joined the line to get in at the 75m mark.  They have markers to let visitors know how long it will be to get in.  The line moved quite fast so it was not so much a problem waiting in the hot summer sun. 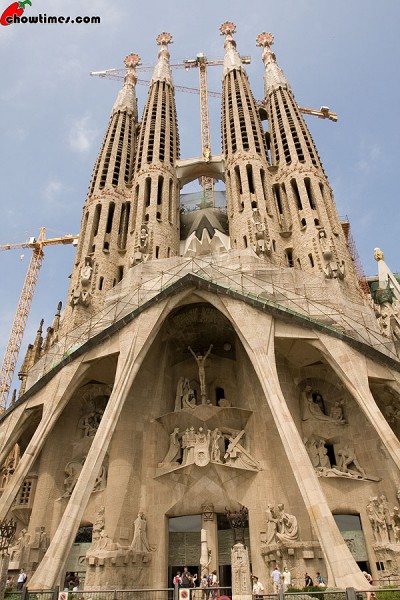 The entrance for the two of us costs €35.00.  That include the extra of a Guided Tour and the lift to the top of one of the towers.  The Guided Tour is available in multiple languages and are limited to certain times of the day.  I think there is one every 3 hours or so.  We were fortunate that there was one that starts in 30 minutes.

When completed, the Sagrada Familia will have a total of 18 towers.  So far only eight towers are completed.  All of the eight completed ones are the smaller towers.

The 18 towers will symbolically represent the Holy Family of the 12 apostles, 4 evangelists, Mary and Jesus.  Eventually, the main tower representing Jesus will tower twice over the other towers.  Even at this scale, it is impressive.  I can imagine how the Sagrada Familia will be church of all churches.

When completed too, the Sagrada Familia will have three fascade.  They are named Passion, Nativity and Glory.  The Passion and Nativity are currently completed.

Our tour starts at the Passion entrance which depicts the suffering of Jesus leading to his crucifixion.

The sculptures were done many many years after the death of Gaudi and is the work of another sculptor.  They are controversial even when it was completed in the 1980s.

The tour guide pointed out a lot of the symbolic sculptures that were not apparent to us.  For instance, the above Soduku like grid of numbers.  Can you figure our what that means? 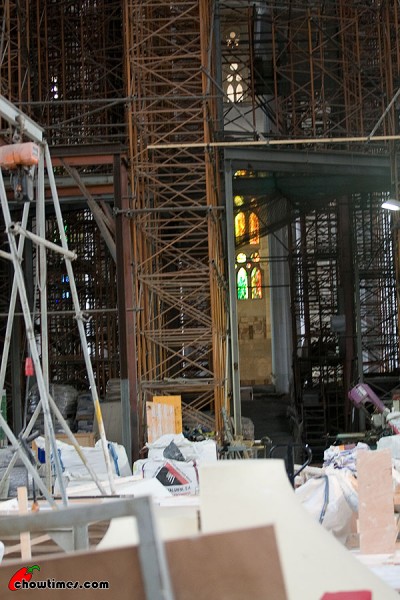 The tour then went into the sanctuary.  Much of the interior is still under construction.  There are scaffolding all over the center nave supporting the base of the Jesus tower at the middle of the church.

We were informed that these scaffolding will be taken down within a month or two.  At that time, the main sanctuary will be opened for worship.

Gaudi is buried somewhere beneath the scaffolding, so we did not get to visit that part.

The workers work in a cordoned off area in the central of the church.

It is here that we saw Gaudi’s work which are inspired by nature.  The columns are designed like branches of a tree reaching to the ceiling of leaves. 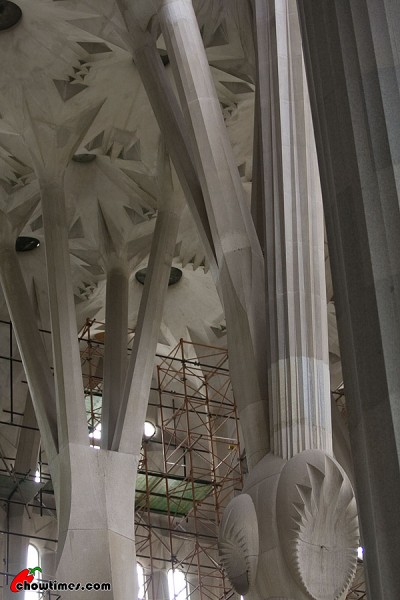 If you look closely at the columns, they are not all geometric.  It is a twisting rising column that starts with a square base and then rises to evolve into multi-sided form and ending with a round base.  Like nature, none of these columns are similar to another.

The tour guide also brought us to the Nativity entrance.  That entrance is the one that was done by Gaudi himself. 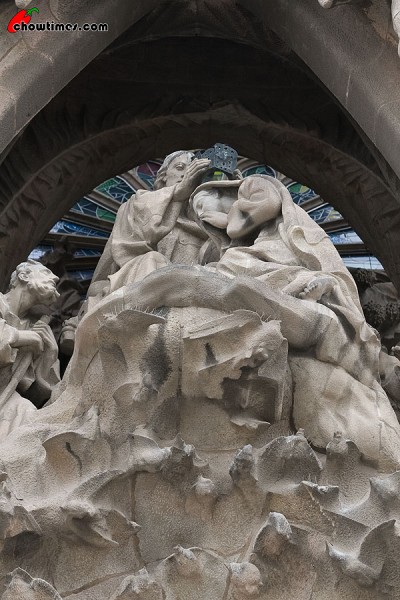 I don’t have a complete photo of the entire entrance.  The entrance is immense and has many scenes of nativity … all done in Gaudi style with lines of nature.

The interesting aspect is not so much of the main sculptures.  It is the surrounding sculptures that are what make Sagrada Familia stands apart from all other churches.  They are unmistakably in the style of Gaudi.

We also went into the Museum (no pictures there).  It is there we saw the model of the completed Sagrada Familia.  This will be an awesome church once completed.  I would sure want to come to Barcelona some day after it is completed to see its full glory. 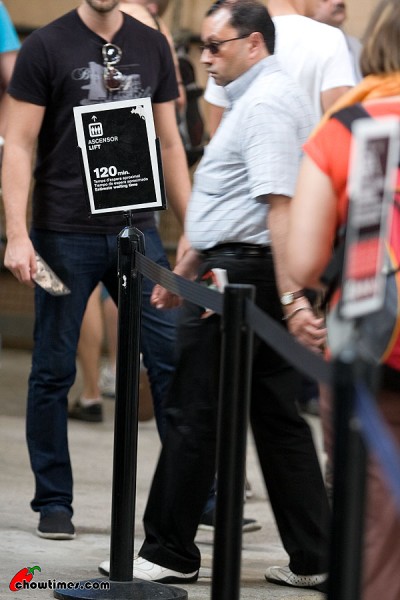 After the guided tour, we went to take the lift to the top of one of the towers.  The line was very long.  We took 1 hour and it was supposed to be short.  The sign at the beginning of the queue shows that if full, the line will take 120 minutes!

The line was not too bad because we got seats most of the way.

We went up by lift and had to walk down.  The stairs were narrow.

The worse part to me was this section of the spiral stairs that does not have railings on inner side.  I took a peek to the bottom and I felt like I will fall through.  Someday someone will fall through this stairs!  I stuck to the side of the wall and gripped the railings tight.  Suanne, she just walks down the stairs like any other stairs.

When the main Jesus tower is completed, it will be 1 meter shorter than the Montjuic hill above.  The reason is because Gaudi said that he does not want his work to surpass the work of God. 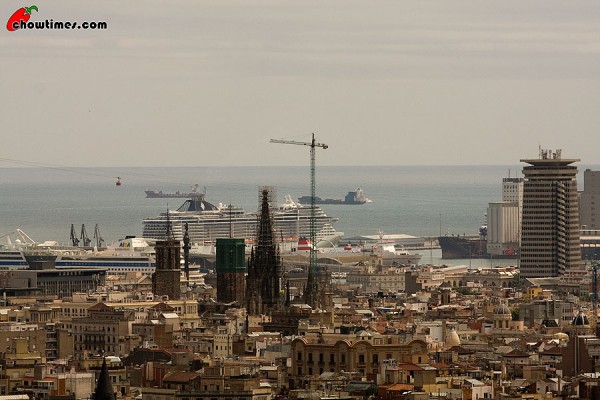 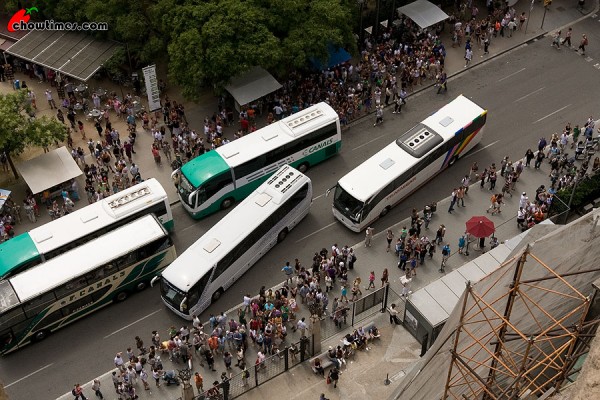 The streets around the Sagrada Familia is always gridlock.  They are mostly caused by tour buses which takes forever to load and unload passengers.

I don’t know what this is called.  It is the top of the existing 8 towers.  It is so symbolic of the city of Barcelona that you see this a lot in souvenior shops.  Again, unmistakably Gaudi.

The above is the base of the Jesus tower under construction.

The Sagrada Familia is planned for completion in 2026 in time to celebrate the 100th year since the passing of Gaudi.  It took 120 years to get to where it is and it appears that it will take just 17 more years to complete.  Considering that only 8 of the 18 towers are completed to date, Sagrada Familia think they will still complete it on time — with the help of modern construction techniques.

The Sagrada Familia is a functioning church.  There is a screened off section where worship takes place.  Once the scaffoldings are taken down, the worship will move to the main nave.

I was thinking it was a very big church and that this section seems so small.  Despite that I think they will fill up the church.

Finally, the north side was the section of the Sagrada Familia that was completed first.  This is the oldest part of the church.

Alright, I think that’s enough for this post.  I have a lot more pictures nice pictures of the sculptures (the 200mm lens came in useful) but I think you had enough too of this rambling of mine.

Hope you enjoyed these pictures too.

Seville: A Slow Day Before the elBulli Dinner

Barcelona: Guess Who We Bumped Into At Casa Mila