We went back to La Boqueria because we wanted to check out the market in the morning.  The last time we were there, it was in the late afternoon and half the market was already closed. 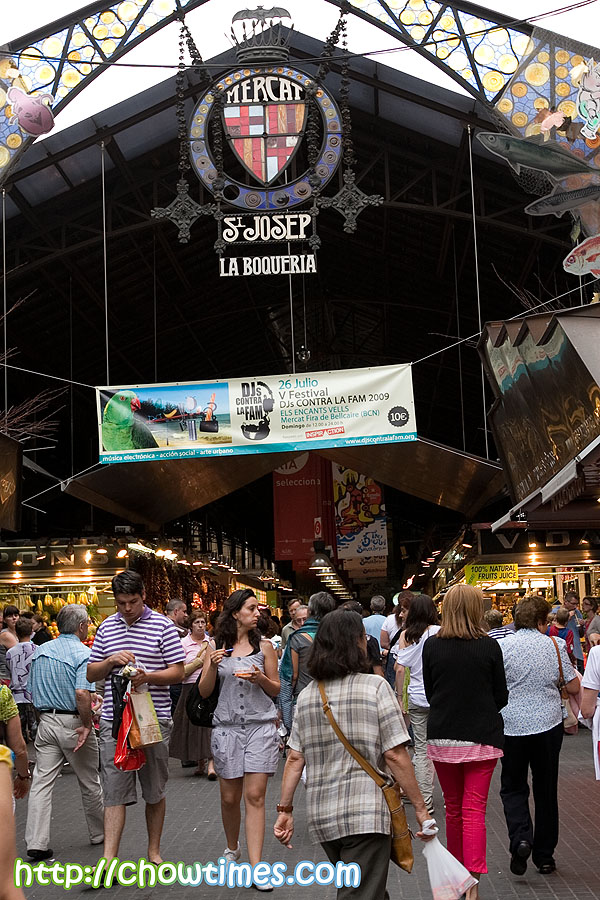 We are going to look for food, specifically for our 2nd breakfast.  It was supposed to be a “savory breakfast” and consisting of items like the potato omelette or sandwiches. 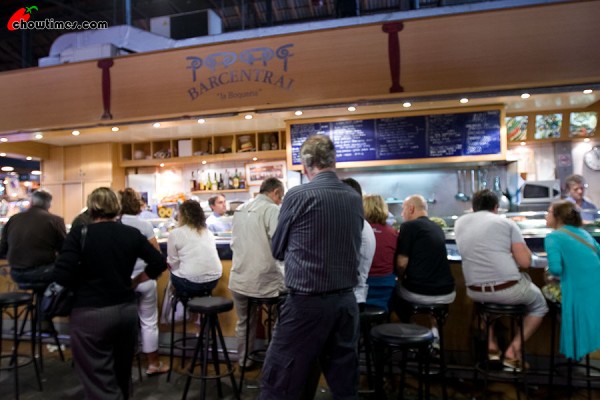 We were right.  There were a lot of food outlets here.  All of them are small with bar style seating.

Needless to say it was crowded.  It just happened that a couple was just about to leave when we walked past the above stall.  Good timing. 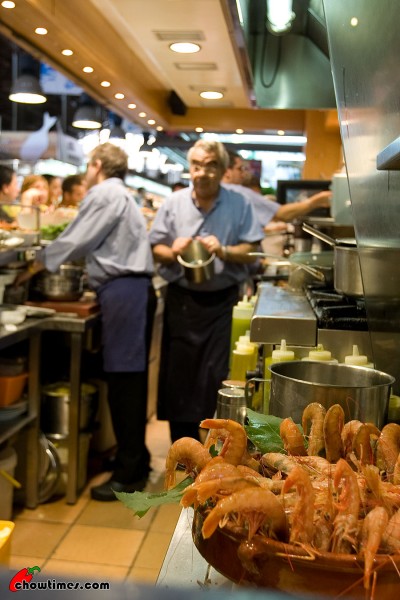 This place does not look like they serve “savory breakfast”.  Anyway, since people are having this in early morning, I guess we’ll have the same too.  The food on display at the counter is so enticing.  Look at the prawns … 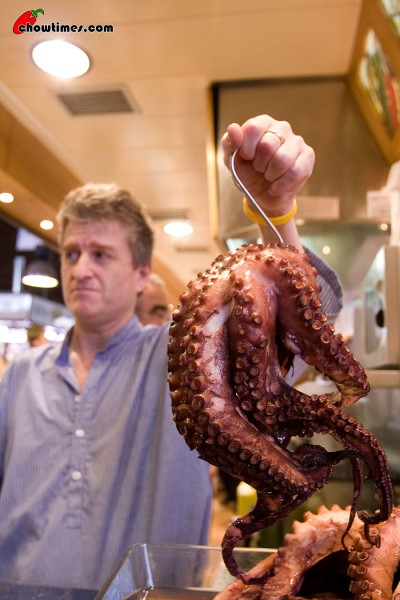 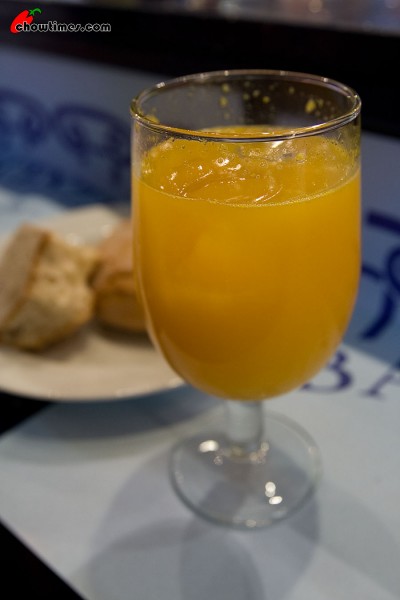 Despite the crowd of people, they sure worked very slowly.  Sitting at the bar looking at them preparing just the orange juice, it took them like 5 minutes to get that prepared.

One thing we noticed about the orange juices we had in Spain, they are all freshly squeezed orange juice.

We ordered a little something as snack.  We ordered the … 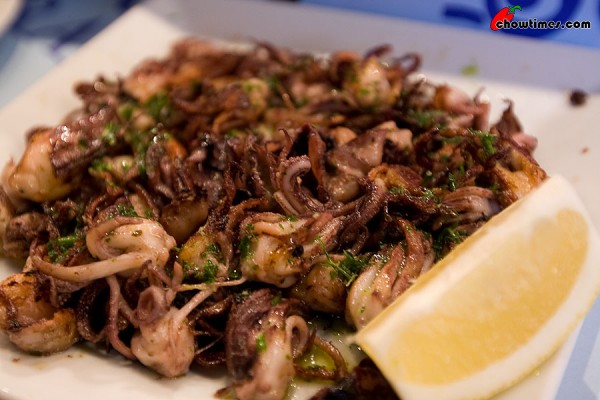 … the Grilled Baby Squid.  We ordered this by pointing to the couple sitting next to us.  It looked and smelt so good.  The tentacles were grilled crispy.

We wanted to order this and then later on another item.  We said we wanted a serving for one person.  We got a big plate for two people instead. 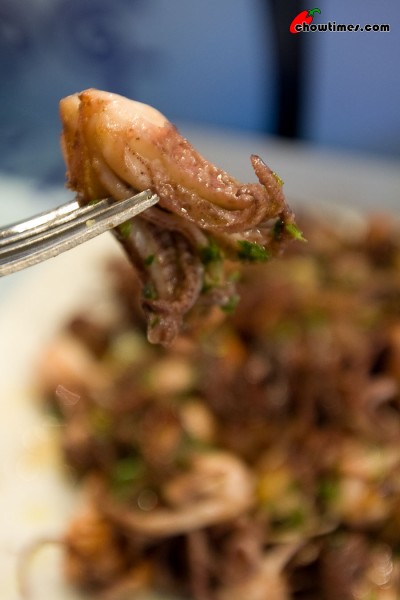 It has a nice saltiness to the taste.

This meal was just €12.  We expect it to be more expensive since the La Boqueria is basically a tourist trap.  So we were surprised it was just €12 (about CAD $20). 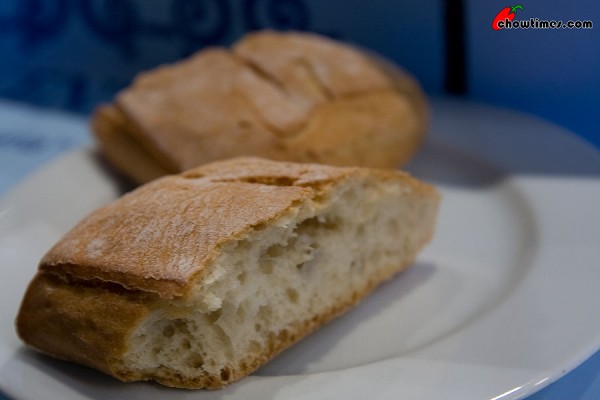 The bread was good as we had come to expect here in Spain.  It was good enough to eat it by itself … did not need the olive oil and balsamic vinegar.

We used the bread to clean up the olive oil sauce from the grilled squid plate.  We asked for extra bread. 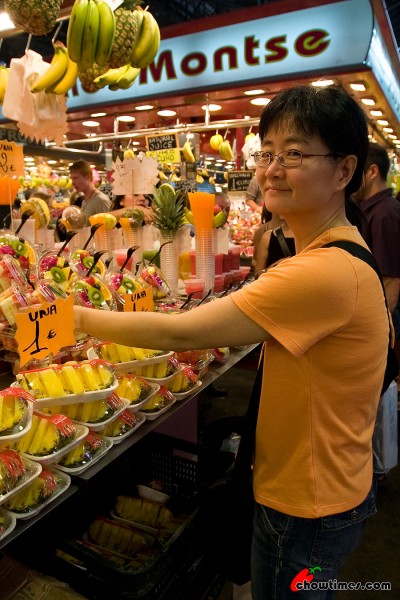 After the squid, we walked around the market.  Saw some really tempting fruits.  We just realized then we hardly had any fruits the past few days. 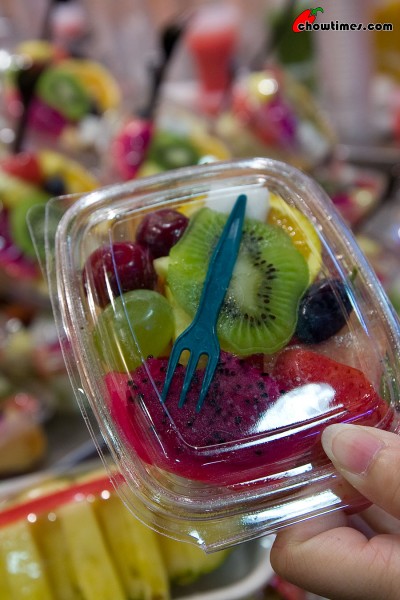