People told that that visiting Spain in summer is not a good idea because it will be going to be very hot. It was on this first day in Seville that we really felt the heat. After just half a day at the Cathedral of Seville, it became unbearably hot. It was almost 40 C. We had finished off our two bottles of water by late morning.

We decided to stop for a drink. It was a toss up between Starbucks and Haagen Dazs. You know how we decided which one? We walked into both and stayed at Haagen Dazs because their air conditioning is stronger. We each got a real big drink. Suanne got a cake — she can’t resist cakes when she sees that. I felt it was downright expensive which is about $26 Canadian.

Next stop that afternoon was to visit the Real Alcazar. Alcazar is the Spanish word meaning Castle. It phonetically sounds the same right? Actually the word Alcazar is based on the Arabic word al qasr, also meaning castle. The word Real means Royal. So, Real Alcazar means the Royal Castle.

Real Alcazar is still in use by the Spanish royal family as the official residence in Seville. The section is off limits to tourists. We were told that they live … on the apartments on the second floor.

Real Alcazar is a fortified fortress built 1000 years ago. It has an intimate atmosphere created by intermingling of Muslim artistic element with others from Gothic, Renaissance and Baroque periods.

We had the audio guides as we tour the entire area. Suanne, as usual, wanted to listen to EACH and EVERY topic and took her own sweet time covering EVERY nook and cranny. I was completely drained because of the heat.

My favourite part is the gardens, especially the one that had the fountain. This is the coolest part of the entire property.

Actually many cities in Spain has its own Alcazar. The name Alcazar is not unique to the one in Seville. 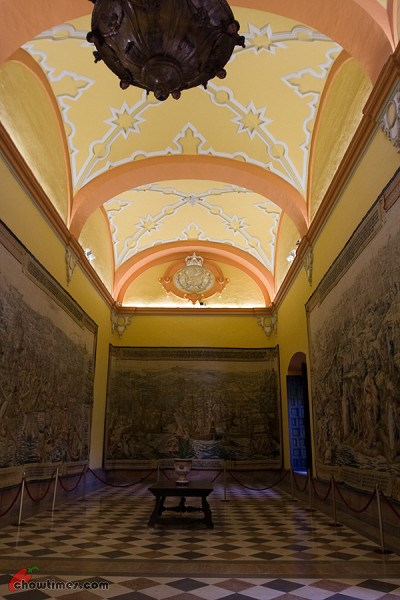 There are not many treasures you see here. Most of the rooms are bare except with the exception of places where there are tapestry or the odd painting.

The Real Alcazar of Seville is listed as an UNESCO world heritage site.

No, I did not quite enjoy this place at all. The Audio Guides were quite unimaginative and the directions were confusing. We twice went into the wrong room out of sequence … and Suanne wanted to retrace back to where we were to start again!