I have always heard that Stepho’s Souvlaki Greek Taverna is popular and the lines were legendary. Still I was amazed with what I saw.

Suanne and I decided to go to Stepho’s our Friday night out. Since we heard that the lines was long, we decided to be there early. We were already at Stepho’s at 4:45PM. I mean there should be no waiting for a table right? After all, how many people would eat at that time. Wrong!

While we did not have to endure waiting outside the restaurant, yet we still had to wait inside for 30 minutes. Shortly after we got seated, the lines began to form outside.

By the time we left at close to seven, the line stretches over to the neighboring shop! Amazing, everyone seems to be patiently waiting. I think this is at least an hour wait for these people … most likely more!

So Suanne and I was certainly excited to finally check out Stepho’s. It has all the signs of a very successful restaurant. For one, they had just celebrated their 20th anniversary last year. There were a lot of wait staff working at a furious pace. It seems like they barely are able to keep it all together.

The inside of the restaurant is larger than we thought. It was also very dark for the most part. It just happened that we were seated at the darkest table in the restaurant. I had to manually crank up the camera’s ISO setting to 1600. So the pictures here are rather grainy and soft. 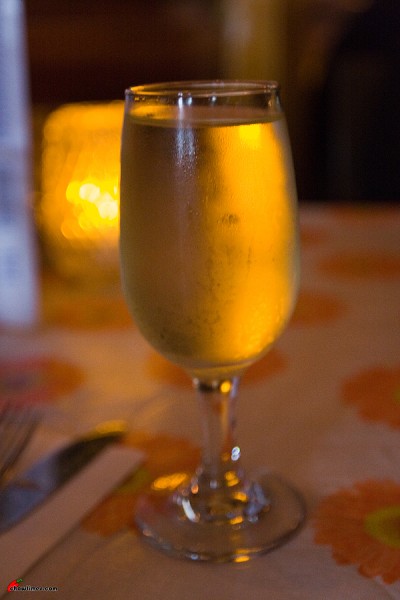 I tried their Greek white wine. There is a name for this but I just can’t remember what it is now. I did not like it. It tasted somewhat coarse and dry. This is $5 for a glass.

You know what makes Stepho’s so popular? It’s their price and especially their humongous portions. Yet despite knowing that, we ordered an appetizer to share.

It is a Stepho’s creation called Toriboukes ($6) … or just cheese balls in English. It is served with … cool slices of beets. The six cheese balls were marvelous. The outside crust is warm and coated with bread crumbs while the inside gooey cheese is colder. It went very well with the garlicky dip. Anyone knows what this dip is called?

Suanne ordered the Roast Lamb from the Platter Meat section. The lamb is an incredibly large chunk of meat. At one look we know that there is no way that Suanne could finish them. Mind you the size of the plate itself is already large and yet it is so full of food that we had to thread carefully less some of them fall off the plate.

This dish is only $10 and is served with roast potatoes, rice pilaf, vege briami and Greek salad. The lamb was so incredibly tender and soft that it virtually melts in our mouth. It was good but seriously, I think it was TOO MUCH of the good thing!

My choice was called the Bakaliaros (Greek Fried Fish). This is also $10. The fish is crispy on the outside. I find it a bit too salty but at least I had the garlic dip to mask the saltiness. As expected, there were lots of fish fillets in this dish and it was not particularly fresh tasting.

We were given two thick pitas. It was fluffy soft and pillowy especially when it was served on the table. We like it but found that they became a little too dry and hard right towards the end of the meal. I guess it is one of those bread that is best eaten warm.

All in all the meal was satisfying. The meal is just $37 after tips. I do find myself very thirsty after the meal which lead me to think that they could have uses a lot of MSG in their cooking.

We observed also that there were quite a lot of take outs in this restaurant. You may check out their menu in this link.

Where Will Suanne and Ben Dine at 5:45PM?